Pressure cookers, especially electric ones, are fast and efficient and they have become an almost indispensable part of most modern kitchens.

Pressure cookers are great for those days when you do not have a lot of time to spare as they prepare food faster than any other traditional cooking method.

Today’s pressure cookers are also safe to use so if you are worried about any dangers like explosions, you will be happy to know that pressure cookers now come with a whole host of features designed to enhance your safety.

Pressure cookers can prepare anything from roasts to desserts and even frozen meat. 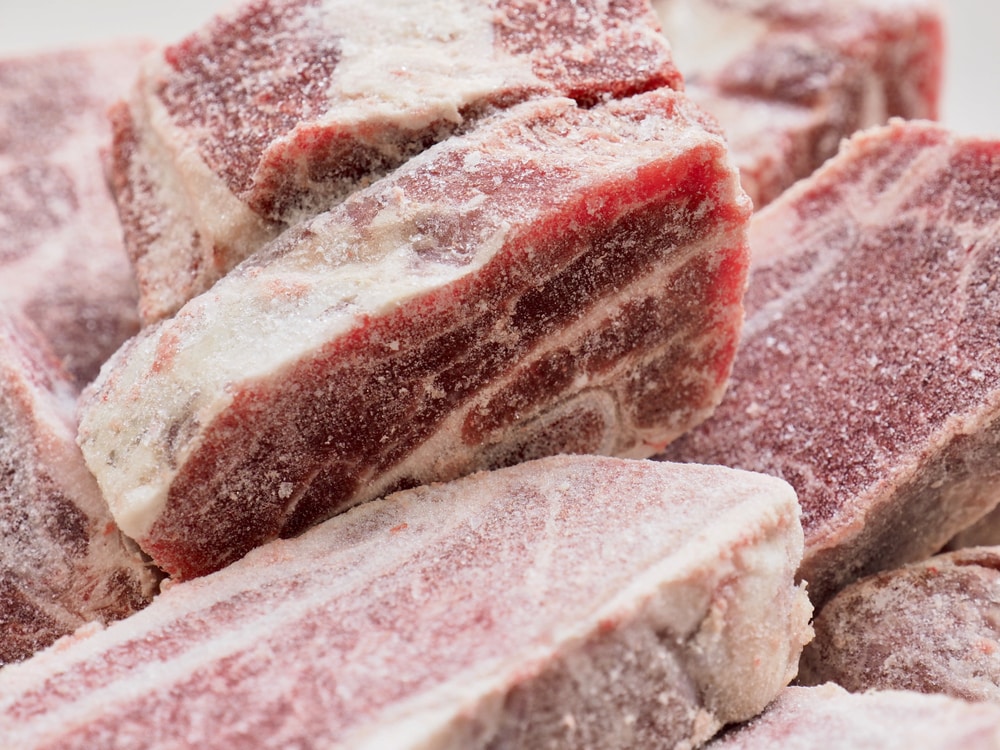 So, you want to prepare a frozen chunk of meat in your pressure cooker? First things first, you should know that it is entirely possible to pressure cook frozen meats.

However, there are certain things that you have to keep in mind not only to ensure that you end up with successful, delicious results but to also make sure that you are safe throughout.

When purchasing frozen meat to use in your pressure cooker, ask the butcher to cut your meat into small, bite-sized chunks before it gets frozen.

We recommend only cooking smaller pieces of meat that are less than an inch thick from frozen. Small pieces of poultry like chicken thighs or breasts will work too.

Do not attempt to cook whole birds or pot roasts from frozen.

Disadvantages of cooking meat from frozen 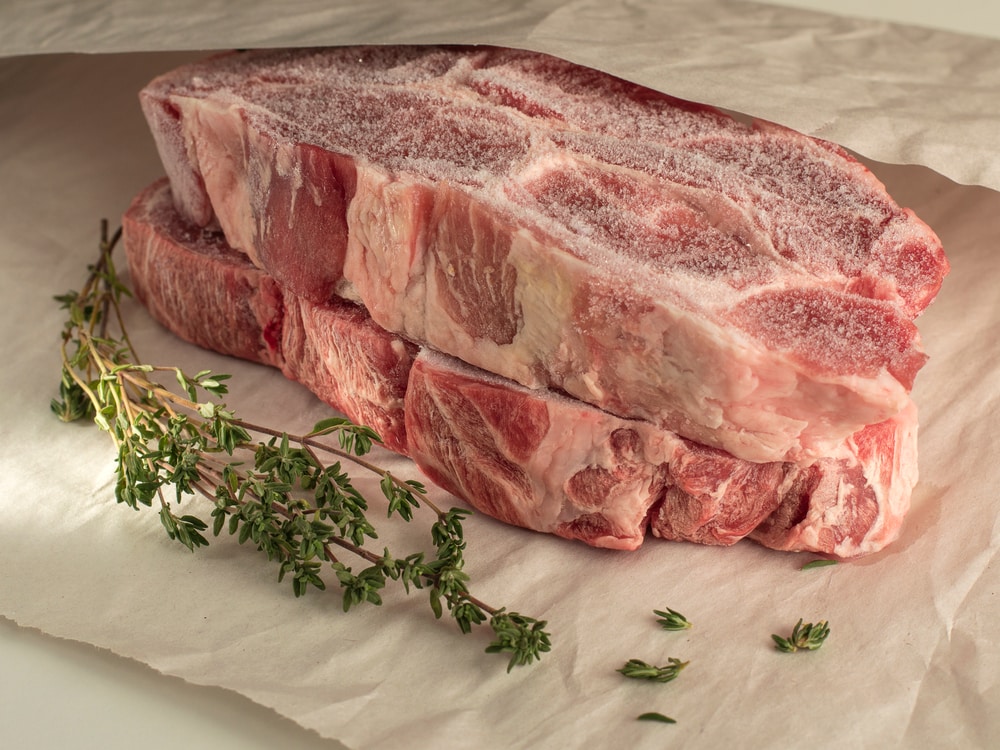 Most meats including poultry tend to lose their flavor and color when they are cooked directly from the frozen form. Defrosting frozen meats in a pressure cooker also leads to the loss of valuable nutrients and minerals.

Meats that are placed completely frozen in a pressure cooker also cook faster on the outside than they do on the inside, which can leave you with uneven results.

For instance, if you throw a huge chunk of frozen meat into the pressure cooker, you will likely end up with an unappetizing slab of meat that will have to be broken down after cooking into portions.

Furthermore, if you prepared the block of meat with other ingredients such as vegetables, then expect everything to mash up together owing to the extended cooking time.

To avoid all this from happening, it is recommended that you thaw your meat, at least partially, to not only reduce the cooking time but also to preserve vital minerals, vitamins, and texture.

Defrosting your frozen meat by pre-thawing it 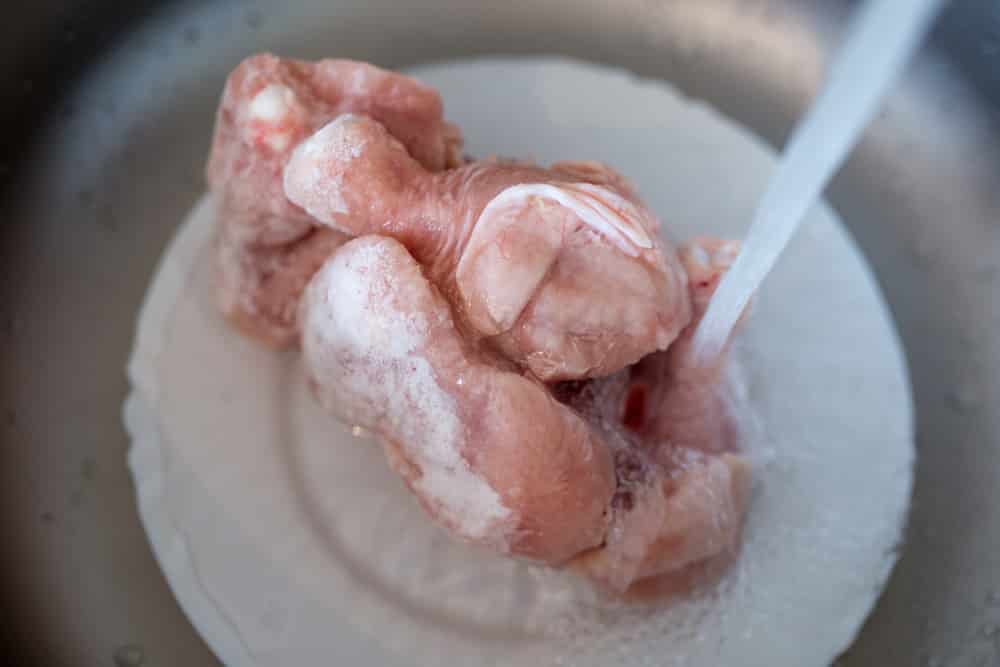 Frozen veggies can easily be placed in a pressure cooker without thawing but you should generally avoid cooking frozen meat without at least pre-thawing it.

Thawing your meat, even partially, will reduce the cooking time while ensuring that the meats cook more evenly.

To partially defrost your meat, take it out of the freezer and allow it to thaw out a little in a basin of cold water. This is a surprisingly quick method, especially if you use a lot of water.

If you are working with a huge packet of meat pieces, you might need to take it out of the freezer early depending on its thickness.

Whatever you do, do not defrost your frozen meat using hot or warm water as it could cause food poisoning if you do.

If you defrost your meat correctly but do not get around to preparing it, you can re-freeze it once more just as long as it was not left out at room temperature for more than 2 hours or defrosted in hot water.

Alternatively, you can use the defrost function on your microwave to partially or fully thaw the meat before cooking. 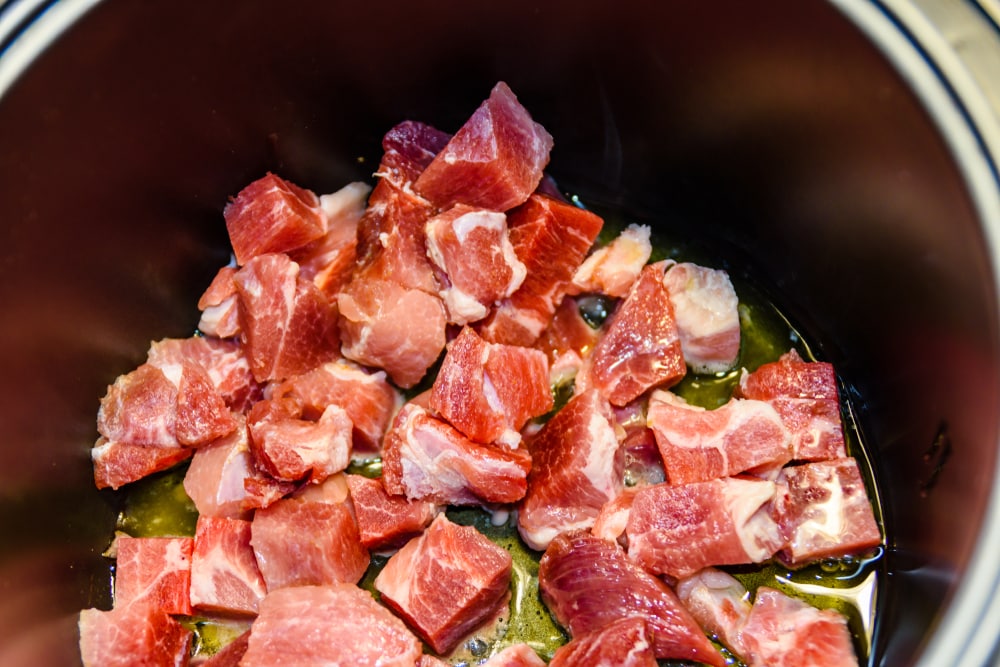 If you purchased your frozen meat and had it prepared into smaller chunks, then it is entirely possible to defrost it directly in the pressure cooker without undergoing the pre-thawing process.

Do not attempt to defrost large chunks though as it will cause the problems mentioned above like unevenly cooked meat.

If you try to quickly thaw a massive chunk of meat, the exterior will look tenderized but the inside will retain its rock-hard core and icy texture.

If the inside of the meat hasn’t thawed completely, you could be serving bacteria-filled food because the meat will not be sterilized properly by the high temperatures. 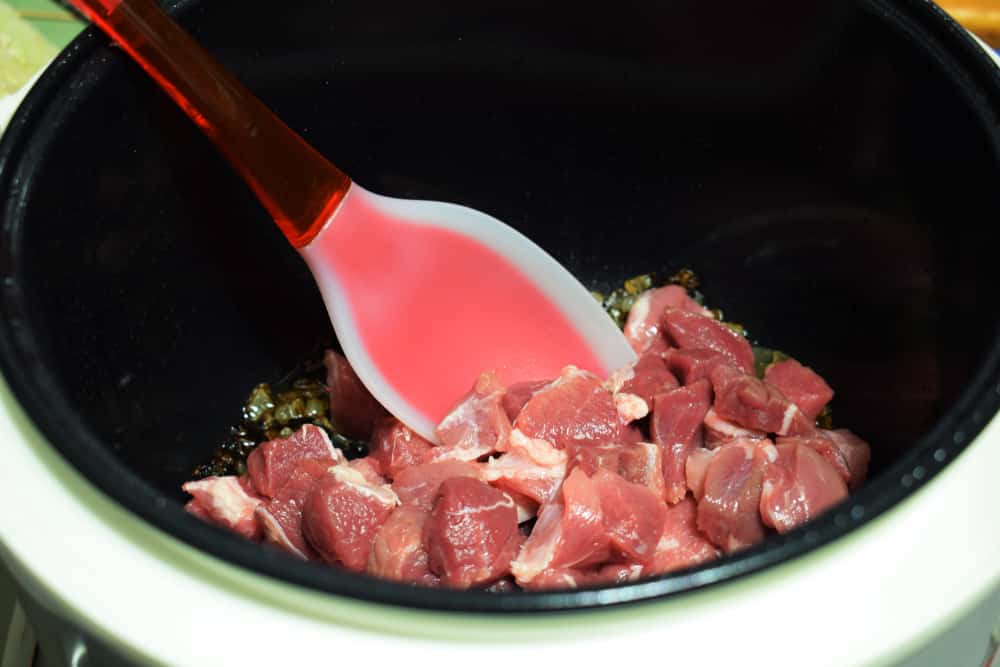 To defrost smaller chunks of meat in a pressure cooker, the meat will need to be completely submerged in water or other liquid of some sort such as a stock.

When the meat is done, remember to check on it using a cooking thermometer to ensure that it has cooked through fully.

Submerging the meat completely in the liquid will allow the heat from the liquid to penetrate the frozen meat more easily which will leave you with even results. 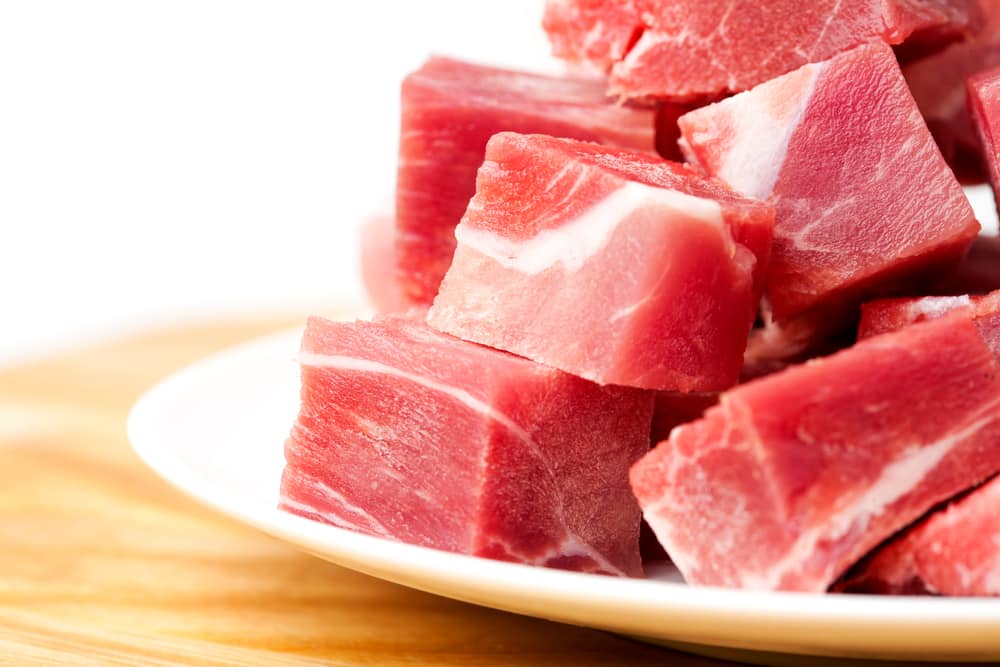 If you are using individual cubes of frozen meat that are 1 inch thick or smaller, you will not need to adjust your normal cooking time by much.

If you are working with larger pieces, the best way to handle them is to thaw, partially thaw or brown them before cooking to prevent yourself from having to increase the cooking time.

Larger cuts of meat such as whole chicken or pot roast will not deliver great results when pressure-cooked from frozen.

Do not steam or braise your frozen meat 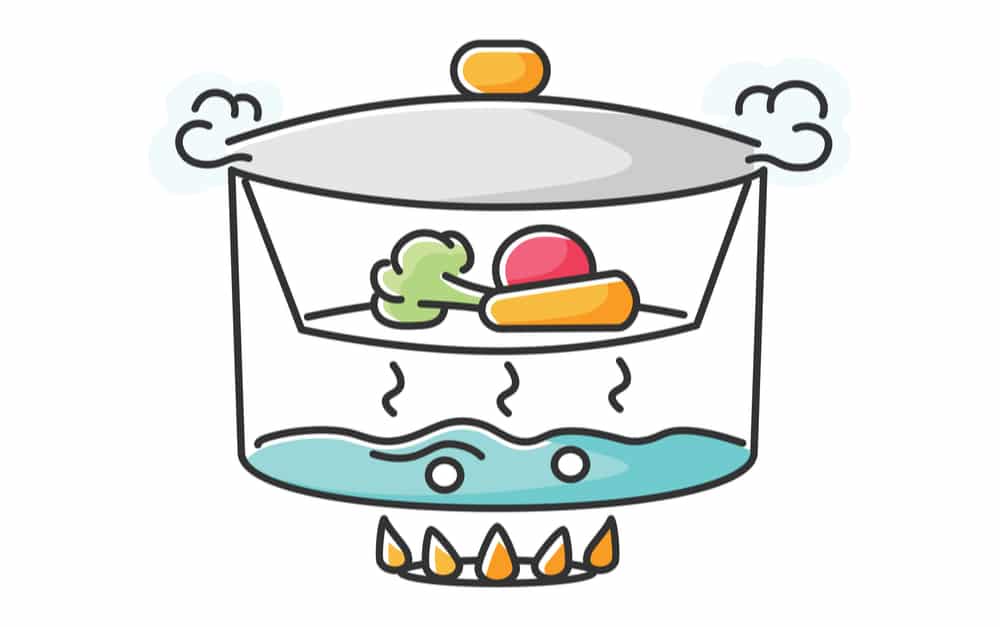 When cooking frozen meat in a pressure cooker, avoid steaming or braising it.

Steaming frozen meat will leave you with a lovely cooked exterior and a frozen solid core while braising it will only cook the part of the meat that has been submerged in the cooking liquid while the rest will remain relatively undone.

Increase cooking time based on the thickness

When pressure cooking frozen meats, remember to increase your cooking times based on the thickness of the meat. For example, defrosted ground beef typically takes about 5 minutes of pressure-cooking time.

However, if the ground beef is in frozen form with at least 1 inch of thickness, then you will want to double your cooking times to 10 minutes.

For frozen pork and beef, you should add at least 5 minutes of cooking time for every inch of thickness.

The only safe method of pressure-cooking frozen meat is to boil it. This means that the meat must be completely submerged in liquid.

Steaming and braising produce uneven cooking which is dangerous as bacteria may survive in some of the parts. Allow for a minimum of 50% more time than your usual cooking time for defrosted meat. 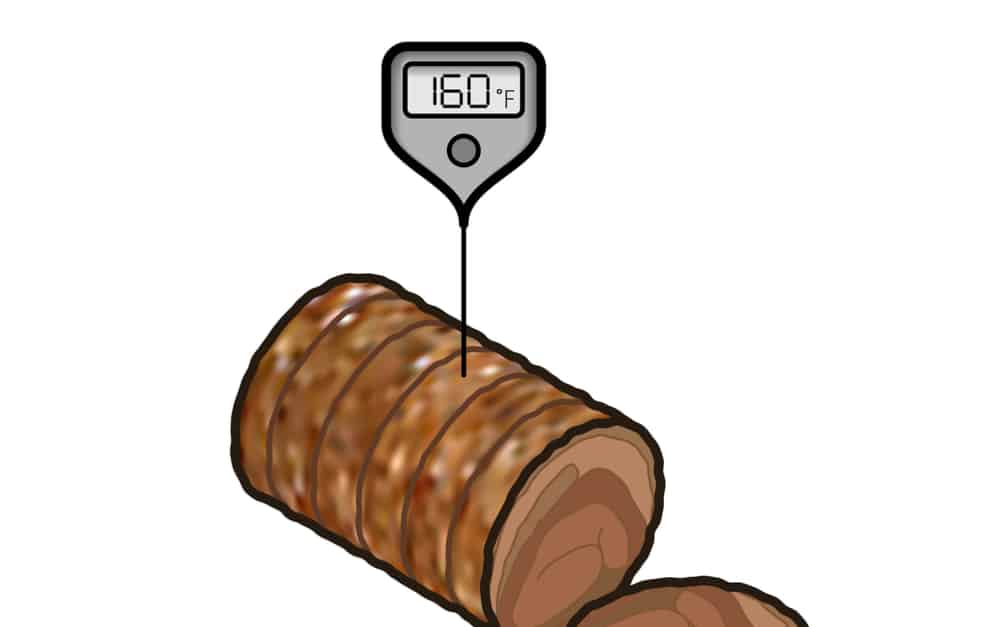 Lastly, when you think the meat is done, check that the center of the meat has reached a safe temperature by using a meat thermometer. Aim for an internal temperature of 160 degrees Fahrenheit.

This ensures that the middle is also fully cooked. If you have any further questions, please contact us in the comment section below. We will do our best to help. 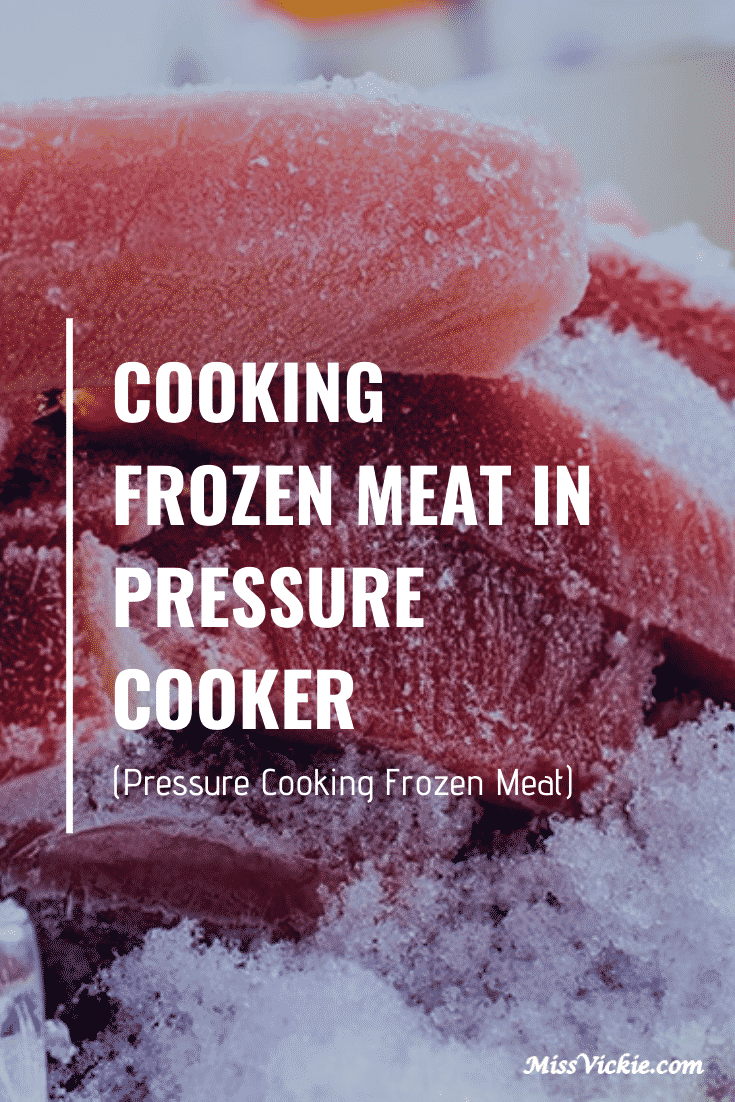