How To Open An Instant Pot After Cooking

Knowing how and when to open an Instant Pot after cooking isn’t that difficult. On the other hand, it has to be done properly. Perhaps the first thing to do is tell how not to open one. This amusing story of familial history could have been tragic. Fortunately, it is only funny and a good object lesson. When pressure cookers first became available for homemakers to purchase, my mother bought one. Grandma poo-pooed the idea at first, even though she often used a pressure cooker. Then my mother showed her that she could reduce the canning time from several hours to less than one.

My grandmother was impressed and followed suit. However, she did not listen to her youngest child when told how to use it. Mom explained to her how to use the pot, how to reduce the pressure, and that the lid shouldn’t be taken off until the pressure was released.

One doesn’t have to just can in these large pots. They can be used for pressure cooking as well. My grandmother made “a mess of beans” in them. That means the number of beans involved is unknown to anyone but her. Instead of waiting for the pressure to come off, she somehow wrestled the lid off. Beans were everywhere. They were on the ceiling, the walls, the floor, the equipment… everywhere.

Grandma was lucky in many ways. One thing that protected her was that she was maybe five feet tall in shoes. The lid deflected the hot beans and liquid away from her.

That is a good example of how not to open a presser cooker, pressure canner or an Instant Pot. My grandmother could have been seriously hurt by the hot beans. If there had been glass jars in there, she might have been cut by flying shrapnel from the jars. It’s hard to open them while under pressure for a good reason.

There are several ways to open a pressure cooker properly. One is to let the pressure come down naturally. Even older models that have a weight can be done this way. The weight will come off easily when the pressure is down. Stovetop devices can be put under cool running water in order to help this process, though it isn’t always necessary.

Instant Pots have a pressure release valve. The one on mine is large and bright orange. By opening the valve, the pressure will release quicker. Why would that be important? Food under pressure continues to cook until the pressure is released.

It also continues to cook while it is still hot. That’s why recipes say to remove roasts from the pan so they can rest and why some say to take said roast out at slightly below ideal temperature. It will continue to that temperature while cooling.

The key to knowing how to open an Instant Pot after cooking is whether or not said lid will come off with ease. If it resists, don’t take it off. If you take it off too soon and you are lucky, you’d spend the next several hours cleaning. If you aren’t lucky, serious injury or death could occur. 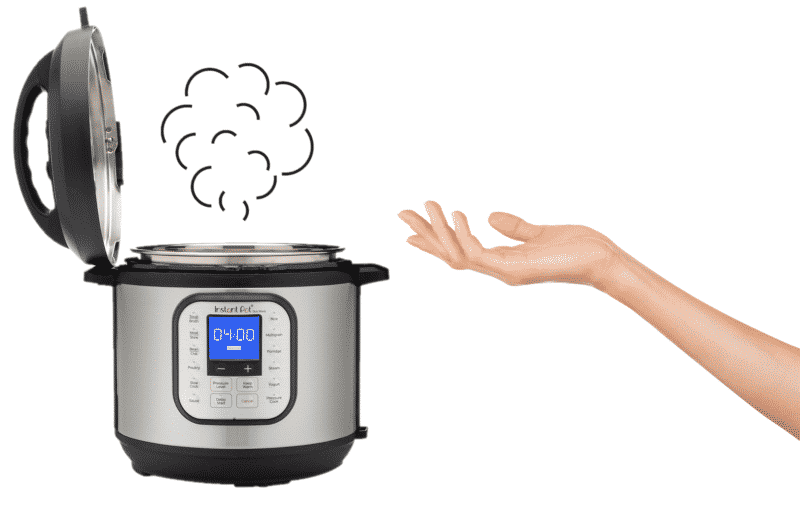