Pressure cookers are certainly amazingly versatile pieces of kitchen equipment. For example, you can use them for cooking meat from frozen, cook rice, and even boil an egg.

However, many people wonder if they are safe to use for cooking with oil and even deep-frying.

It helps first to understand the dynamics of pressure cooking. Food is cooked in a watery liquid inside a sealed pot. People like this method because it saves a lot of time and electricity.

Basically, as the cooking liquid heats up, the steam it makes comes under pressure because it cannot escape. This causes the temperature to rise higher than in normal cooking, causing the food to cook faster.

After the food is done, the pressure release valve allows the steam to escape safely. Then you can then open the lid. You can use this method to imitate the tenderizing effects of traditional slow cooking.

Almost anything that you can cook in water-based liquids is safe to cook in a pressure cooker. Notice that we stressed water-based.

Can We Cook Food With Oil In A Pressure Cooker?

That’s because you cannot and must not use a home pressure cooker for deep frying. It is not safe.

While your Instant Pot can be used with a small amount of oil – up to a quarter of a cup – plus stock or water, you must not use it with a bigger volume of oil.

Some have tried it and ended up with very disappointing, soggy results. That’s because all the moisture that comes out of the chicken goes back into the oil.

You can fry your chicken and other foods under pressure if you use a pressure fryer gadget. This is what KFC uses to make their famous chicken.

Colonel Sanders didn’t want to shallow pan fry the chicken because it’s difficult to get it cooked through quickly like that. He also didn’t want to deep fry it because that would cause quality issues.

So, he modified a pressure cooker and created a pressure fryer that heats the oil to higher temperatures than standard kitchen appliances.

The chicken generates less moisture this way, plus it uses less oil because it does not get contaminated as fast, so you can reuse it many times over.

Remember, though, an ordinary home pressure cooker can’t be used as a pressure fryer. For one, the seals aren’t made to cope with it.

Also, the amount of pressure generated in a pressure cooker will only heat oil to about 248˚F, and oil needs to be at 350˚F to boil. While pressure frying and pressure cooking may seem the same, the type of equipment needed isn’t.

Most pressure fryers are very big and are specially made for commercial use. However, smaller ones are available if you want to purchase them.

If you want to shallow fry or sauté food in your pressure cooker using oil, you will need to do it with the lid removed. In this case, you’re just using it as a normal pot.

Use the “fry” or “sauté” setting on your Instant Pot for this purpose.

There are some claims that you can deep fry in a pressure cooker, but you can’t.

Oil does not produce steam (necessary to build pressure), and you need far higher temperatures to boil oil which a pressure cooker will not be able to reach.

Although pressure frying in oil is done in a commercial setting, most notably by Colonel Saunders’ franchise, this method uses specially modified equipment.

Pressure cooking in oil is not possible to do in an ordinary domestic pressure cooker. If you wish to deep fry your food, you need to invest in a deep fat fryer or chip pan.

Of course, if you want to fry off your ingredients before they cook under pressure, this is perfectly safe and acceptable. You will need to do this with the lid off.

After that, as long as you ensure that you add the correct quantity of liquid (not oil) before you seal the lid, generate steam, and enable the pressure cooker to reach high temperatures safely, you should not have a problem. 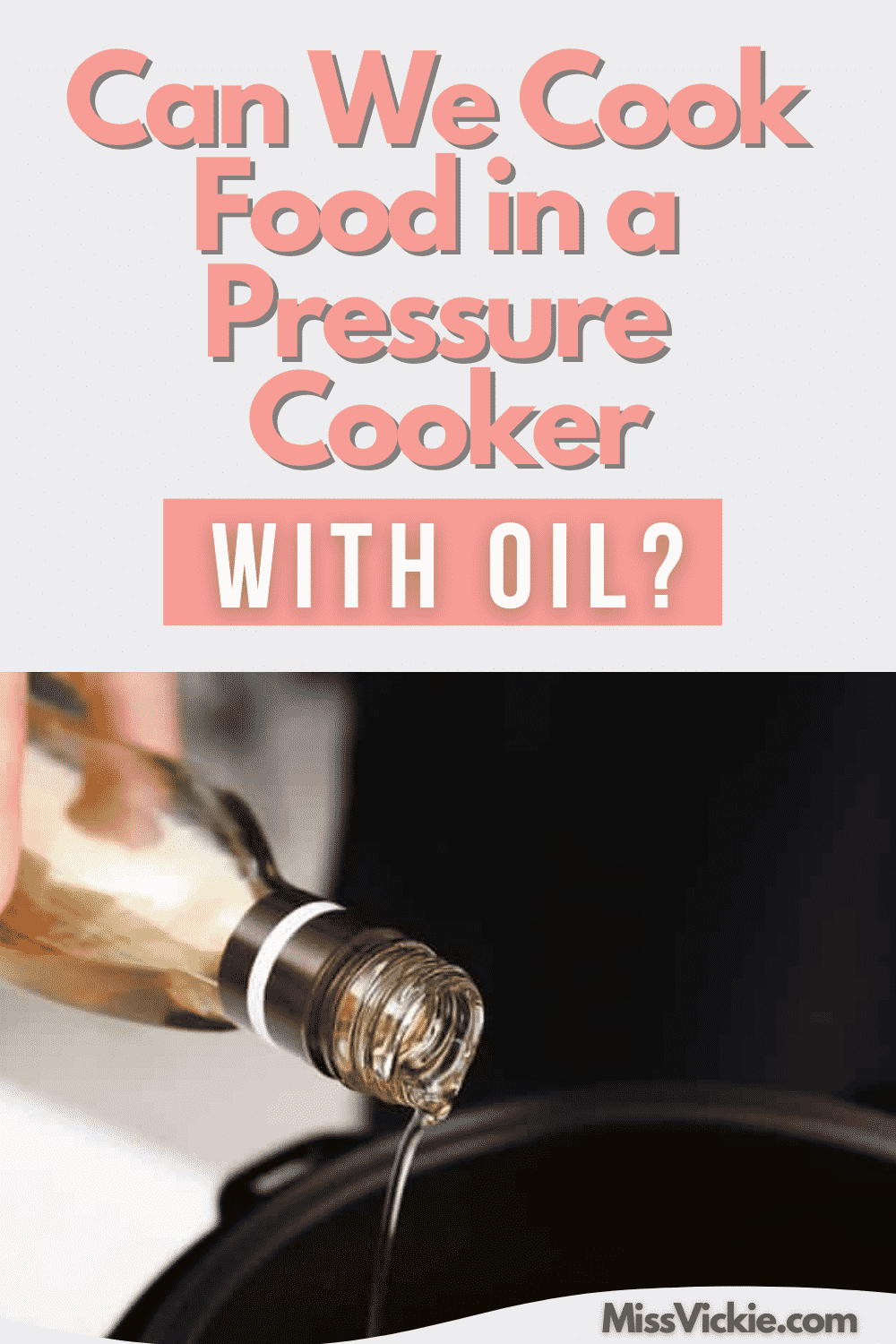