The first thing to note is that a pressure cooker always needs some liquid. Cooking without liquid can cause an explosion, a fire, or both. However, that liquid does not have to be water. It is possible to use a pressure cooker without water.

Broth: Whether you are making soup or making broth, broth can be used as a base. Store-bought broth is good, although it tends to be high in sodium. It may seem odd to make broth with broth but think of using or making vegetable broth. Sometimes it’s nice to infuse it with another flavor, such as seafood, chicken, or beef broth. For the most flavor and nutritional value, bone broth is one of the best to either make or choose for a base.

Tomato sauce: You can make tomato sauce or use it in your pressure cooker without water. However, it is essential to make sure there is enough liquid in the cooker to make steam. That is what the pressure cooker uses to create the pressure. In this instance, you can use a small amount of broth or canned tomato juice to start the liquid. Also, make sure to squeeze the ripe tomatoes to release the liquid naturally in them.

Milk: While this is not recommended, it is possible to use milk in conjunction with other liquids in a pressure cooker. Keep in mind that the milk may curdle during the cooking. It doesn’t look appealing, but many people like the flavor. Using milk only in the pressure cooker could result in clogging the jet and would most likely scorch the milk.

Juice: Many people look at juice as being a breakfast beverage and not much else. However, juice can add a great deal of flavor to a dish without adding a lot of chemicals. Natural, whole fruit juices are the best. An example of this is making apple butter (or any fruit butter). Apple juice adds more flavor than water and adds nutrients to it. Cranberry juice maybe even better for those who like the flavor.

Wine: Believe it or not, wine can be the liquid in the pressure cooker. That said, it will have a strong taste, so anything else should be flavorful enough to stand up to it. It is even possible to make mulled wine in the pressure cooker without losing the alcohol content. That needs to be kept to one minute of cooking, though.

What not to use in the pressure cooker without water?

Nothing: Any cookbook with a recipe that calls for a pressure cooker without liquid is likely to be recalled. At least one has in the last forty years. All of the rest of the recipes were fine; that one could have killed someone.

Fat: Oil, animal fat, and even butter as the only liquid in a pressure cooker is a recipe for disaster… as much as not using any liquid at all.

Yes, you can use a pressure cooker without water. However, that doesn’t mean it can be used without liquid. 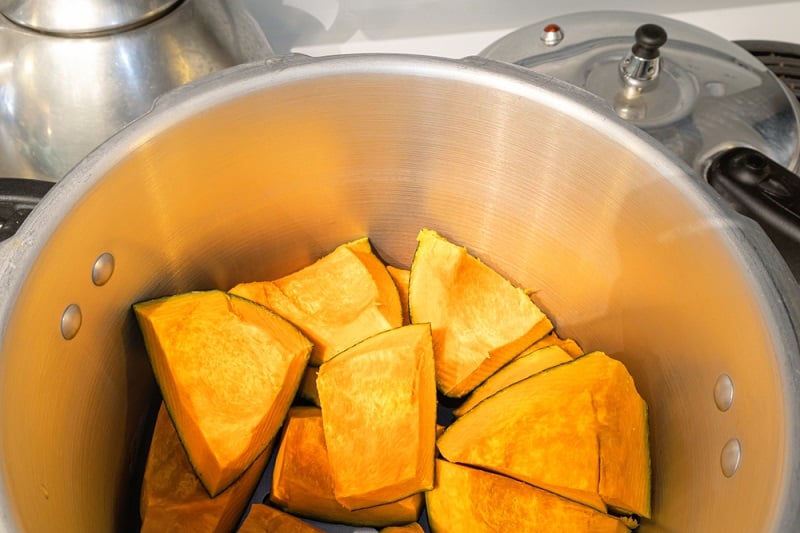