When it comes to cooking Boston butt, everyone seems to have an opinion!

We decided to tackle the question head-on and investigate the matter. Read to the end and see if you agree with the conclusion we came to. You should pick up some great tips along the way!

What Exactly Is Boston’s Butt? 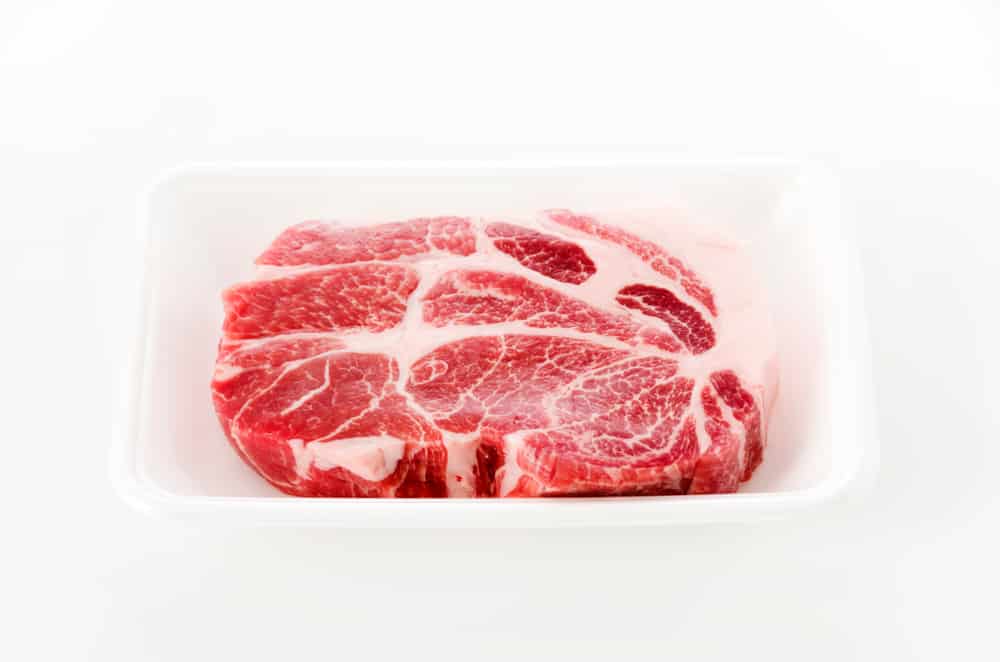 Well, it’s not what you may be thinking…despite the name, Boston butt has nothing to do with a pig’s butt. We’ll get into where the name came from in a minute but first, let us tell you what it is.

It is a cut of pork that comes from the shoulder of a pig. The Brits call it “pork hand and spring” or simply, “pork shoulder on the bone” which is more accurate. Koreans call it moksal, meaning “neck meat”.

The reason it has a different name in the US is that in colonial days, butchers in New England used to take the less popular pork cuts and pack them away in barrels to be stored and transported elsewhere. 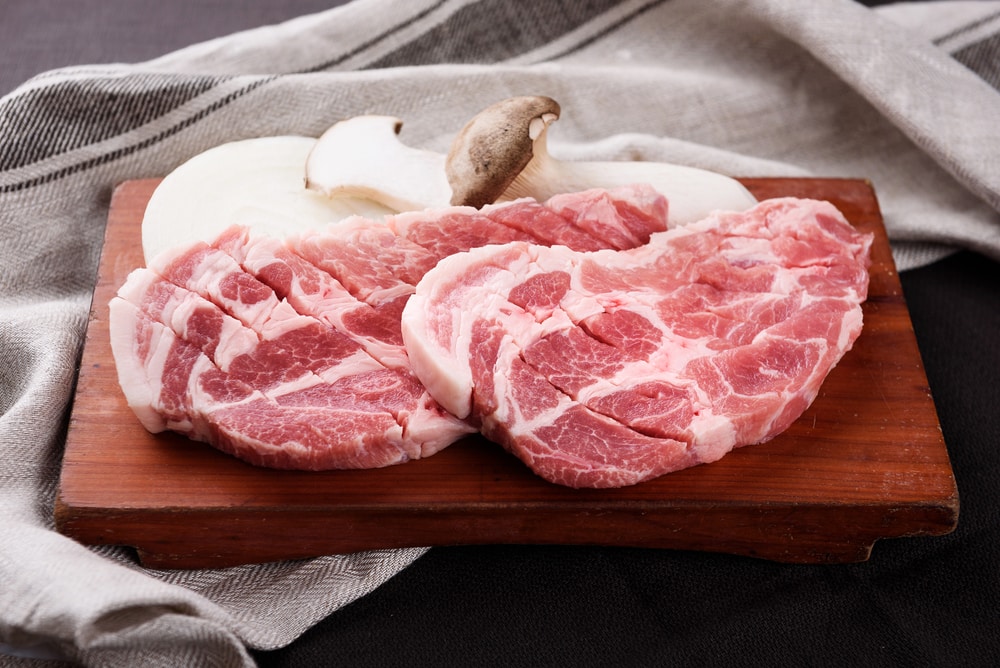 The barrels were called “butts”. The meat was known as “pork in a butt”. The Boston part of the name came about because of the meat’s connection to New England.

It quickly became a popular cut across the country and indeed, is popular all over the world.

Why Is It So Popular? Boston butt provides a lot of meat from a single cut plus it is easy to cook, slowly, without needing much supervision.

Because it consists of parts of the pig’s neck, shoulder, and blade, it contains a lot of fat and connective tissue.

Long, slow cooking melts this into tender, juicy, tasty meat that is useful in a variety of dishes. It is perfect for pulled pork sandwiches, burritos, bulgogi, and more.

Because it is such an amazing cut of meat, we wanted to show you what we consider the best way to cook it… fat side up or down?

Boston Butt Fat Side Up Or Down?

Let’s first assume we’re cooking the butt in a smoker. This, by the way, is considered the best way to do it. We’ll give the secret away right now… we think it’s best to cook it with the fatty side facing upwards.

Boston butt has a cap of fat that is on the top side of the cut. It is sometimes up to an inch thick but we recommend just trimming the bits that overhang the edges and leaving the rest for now.

The reason is that the fat will slowly run down the piece of meat as it melts and will keep the pork moist and tender.

Keeping the meat fat side upwards will help to prevent flare-ups because the fat is not in direct contact with the source of heat. 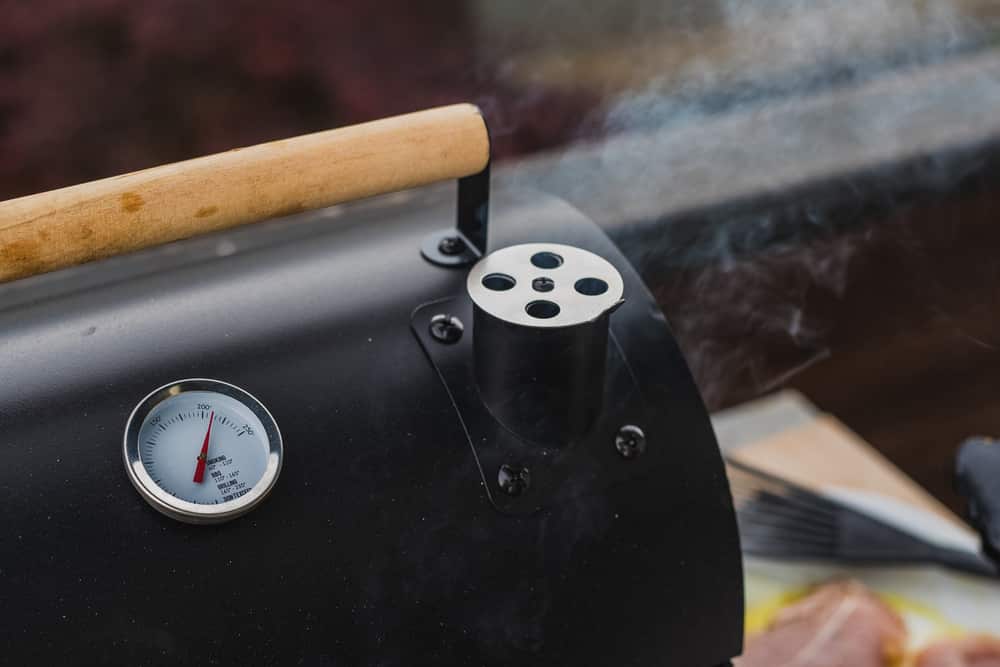 Once the smoker has been preheated to around 225 degrees Fahrenheit and the Boston butt has been seasoned, put your meat in.

A tip for the seasoning is to rub the meat all over with Dijon mustard before putting on the seasoning rub. The mustard will help the spice rub to stick to the meat and not end up all over the grill.

Cook the meat for approximately two hours for every pound. If you want it to cook faster, raise the temperature to 250 degrees but really, the slower the better to allow time for that fat and connective tissue to melt.

Benefits To Cooking with the Fat Side Up 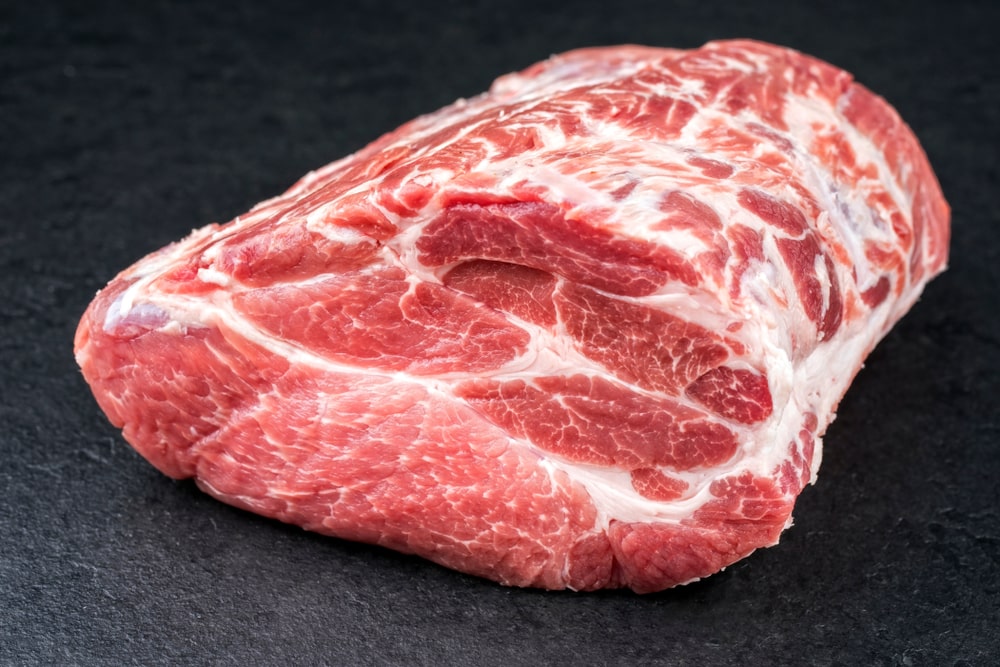 By positioning the meat with the fat side up, the fat acts as a natural basting liquid, keeping the meat moist as it cooks.

Of course, the fat will not penetrate very deeply into the meat, but it will prevent precious moisture from escaping.

Disadvantages of Cooking with the Fat Side Up

Some say that the melting fat will wash the seasoning rub off. However, we think we’ve solved this issue by applying a layer of mustard first to “stick” the spices on.

As long as you’ve applied the rub correctly, using the mustard layer beforehand, the meat will still be well-seasoned and flavorful when it’s finished cooking.

Others make the valid point that the fat layer insulates the meat from direct heat and prevents it from drying out during the cooking process. We contend that while this is a fair point, you are going to have to deal with flare-ups as the fat drips down and burns. These may scorch the meat and create a need for more supervision. These are all valid points.

However, we stand by our conviction that it is better to cook the pork with the fat side up. The fat is going to render and drip off the meat in any case, and if it’s exposed to direct heat, you may have to deal with flare-ups.

This will give the meat a charred exterior, which will detract from the flavor and may dry it out. This process will also require more supervision.

There are other alternatives – flipping or rotating. 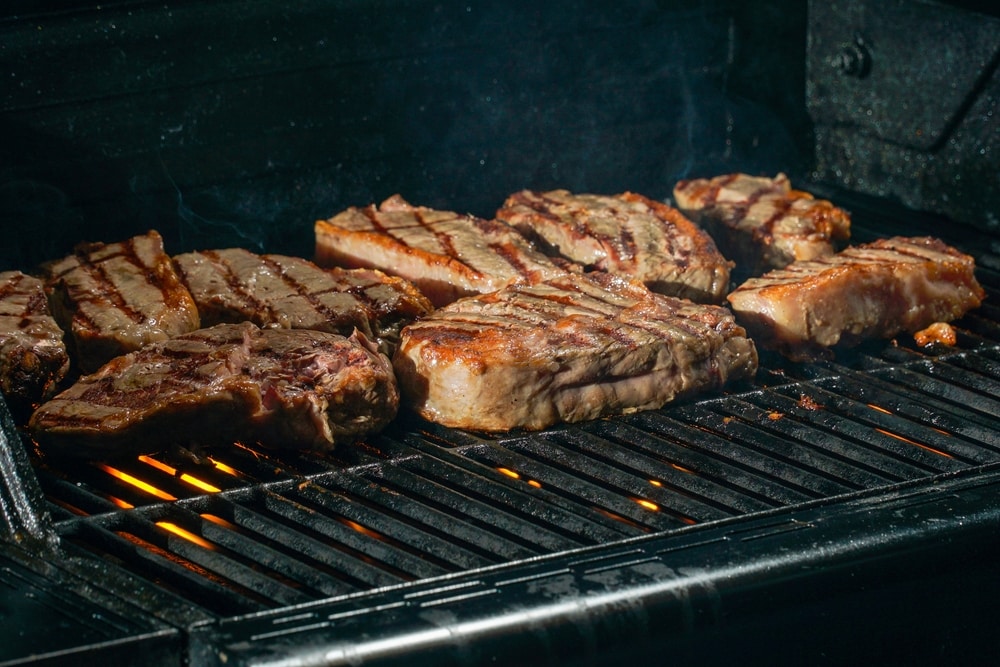 The pork butt can be turned over periodically so that the fat faces up and down at intervals.

The main disadvantage of this method is that every time the smoker is opened, heat is lost, thereby increasing an already long cooking time. Some smokers have “hotspots” causing the meat to cook unevenly. To solve this issue and to ensure that the fat melts evenly, you can rotate the meat, keeping the fat side up, by 45 degrees every two hours.

With all of these methods, if you are going to open the smoker, do it fast so that you lose as little heat as possible.

To Shorten the Cooking Time 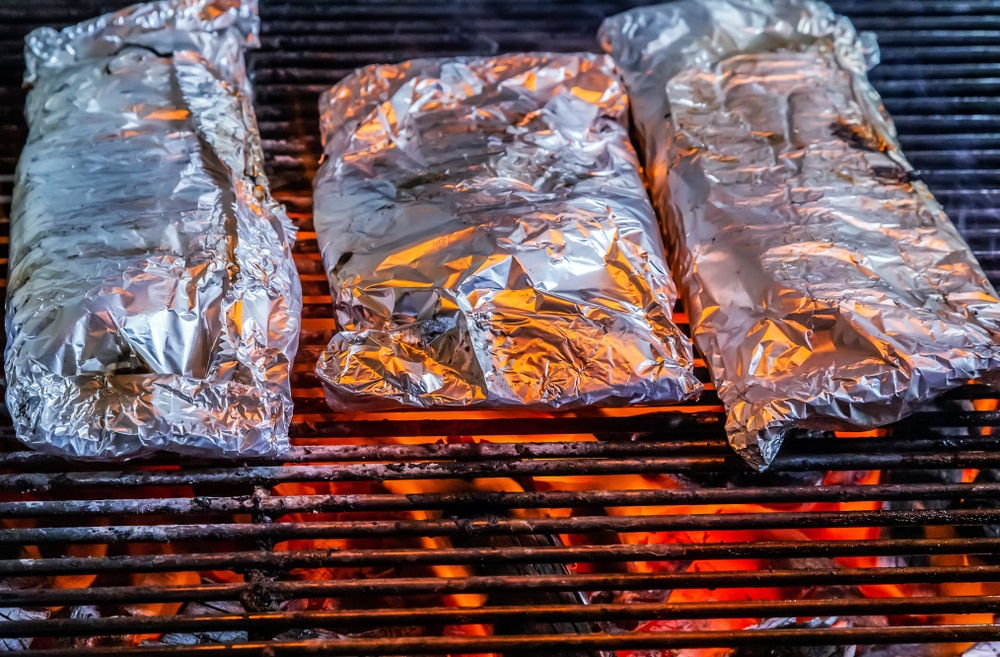 You may be a little daunted by the long cooking time, especially if you have a large Boston butt. At a time of two hours per pound, a six-pound pork butt will need 12 hours to be done!

To speed up the process by a couple of hours, you can wrap the meat in a layer of tinfoil for a while. This must be done during the middle part of the cooking time, only after about two-thirds of the total cooking time.

You will know when the meat is ready for this step when the outside of it is a dark reddish-brown and has a crispy texture.

Use a double layer of heavy-duty aluminum foil and wrap it tightly around the meat. Put the meat back into the smoker. You can leave it like this until it is done or unwrap it again for the final half-hour to re-crisp.

What if You Don’t Have a Smoker? 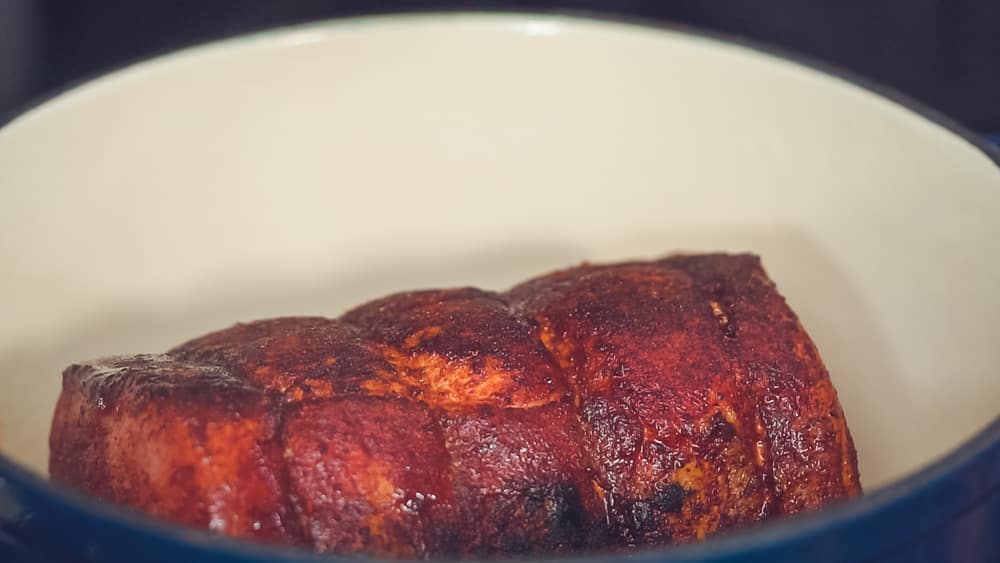 You can still make a succulent Boston butt without a smoker. Use a Dutch oven or slow cooker with plenty of liquid at the bottom. Some cooks like to use apple juice, others prefer beer.

There are many recipes but the method is similar. Again, we suggest positioning the meat with the fat side up so that the fat can baste it.

With this method, you might want to trim off the excess fat so that the braising liquid is not too fatty. Cover the container tightly and cook it low and slow.

When done, allow the meat to rest, as usual, covered, in the liquid. Then shred it directly into the liquid or strain off the liquid, skim the fat off, and make a sauce. After all this, you might be wondering if any of it even makes a difference. Boston butt is such a great cut of meat that you can get good results whether the fat is facing down or up.

As long as you adhere to the other guidelines, especially the recommended cooking times, you will end up with a piece of pork that is tender, moist, and very tasty.

Whatever method you use, please allow the meat to rest for at least half an hour before serving. We hope you find a method that works well for you. Let us know in the comment section how it goes!