Gravy can refer to many different things depending on where in the world you live.

There’s more than one understanding of the word gravy in various states in the United States alone. In the Southern U.S., gravy is a rich sauce cooked up using different ingredients and bases.

However, for Italians, gravy is immediately thought of as a pot of ragu broiled down to perfection every Sunday. Here, we’ll be looking at the more general definition of gravy. 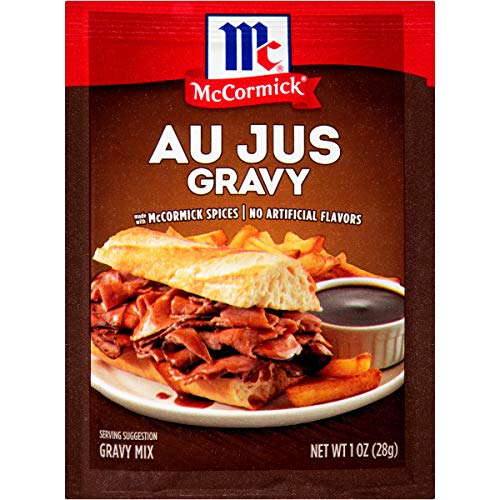 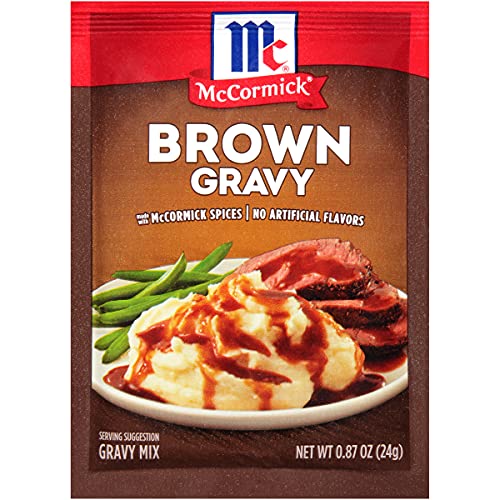 We’re taking you through an overview of the sauce that goes well with roasted dishes, including meals like roast chicken, a whole turkey, or beef bottom round roast.

Au Jus, pronounced ‘ah-zhoo,’ is similar to the regular gravy and originates from France. It has a lighter color and a thinner consistency, more akin to broth/soup.

Let’s take a closer look at the differences between these two delicacies.

Here’s a concise but comprehensive comparison between Au Jus and brown gravy so that you know everything about these two favorite accompaniments to a roast.

Brown gravy typically takes its color from the beef stock and roasting residue that it’s made from, although brown onion gravy and other Vegan alternatives are also found.

Unlike Au Jus, it’s thickened to the right consistency for serving and does not have to reduce, making it the faster to prepare and the more commonly found gravy style.

Gravy is made from a combination of stock and drippings from the roasting pan.

Beef stock is made beforehand using either the roasted leftovers and water, a specific stock recipe, or a commercially available stock liquid, powder, or cube.

Gravy is usually served with a roast but can be enjoyed with a variety of different meals. It goes great with biscuits and on top of rice, and all types of meat are served with gravy.

Beef stock obtained from pan scraping or another source is then thickened using cornstarch, cornflour, or any other thickening agent of choice.

The thickening agent or traditional gravy is cornstarch, but arrowroot works just as well.

Many chefs go for a basic white roux made from equal parts of butter and flour heated to a paste with a dash of seasoning.

Alternatively, there is also a range of other effective thickening powders available in most grocery stores.

There are many trusted ways of making good beef stock for gravy.

Most involve the roasted residue, drippings, and other roasting pan scrapings being cooked up with water and a range of different spices, vegetable extracts, and often also with additional stock cubes, powder, or liquid.

Once the right flavor is reached, the gravy is then thickened.

Various herbs and butter are often added to enhance the flavor and richness, like bacon fat and drippings from several types of other meat.

Gravy doesn’t always need to be made from meat, unlike Au Jus, and is at times prepared from a vegetable stock instead.

Leftover pasta water‘s slightly salty silky texture is ideal for thickening gravy. Add a little at a time and simmer your gravy down until it has reduced to the thickness desired.

Flour also works as a thickener but needs to cook for longer, whereas commercial gravy powders should be readily available in all grocery stores.

Work carefully when using bouillon cubes, powdered stock, or a prepared liquid combined with cook-in gravy powder. The combo can make your gravy very salty, so taste and adjust accordingly.

Au Jus is a French culinary term for gravy made from the juices obtained during roasting meat. The meat’s secretions are reduced, seasoned, and served as a thin sauce similar to gravy.

Unlike conventional brown gravy, Jus is not thickened using wheat flour, cornstarch, or other conventional thickeners.

Traditional Jus is made from juices obtained from cooking meat. It’s not as thick as gravy and takes much longer to prepare to reach the right viscosity.

Jus is seldomly served at home due to its extensive preparation but is commonly served in good restaurants and fine dining institutes.

When a meal is served with Jus made from the meat itself, the culinary phrase ‘Au Jus’ typically accompanies the dish’s name.

Although Jus starts from the same ingredient, it is not very thick.

It’s nowhere near as viscous as gravy and takes longer to prepare as reducing to the right consistency and flavor is an extensive time-intensive process.

If thickener is added to the Jus, it becomes called ‘jus lié’ instead.

The simplest Jus is prepared by boiling the drippings and juices from the meat roasted with plain water and salt. Liquids left from roasting are reduced by roughly 75% to obtain basic Jus.

In America, Jus doesn’t conventionally include the juices of the meat that is being served. Instead, American Jus is prepared separately and served as a complementary accompaniment to other meats.

Once properly cooked, Jus can be preserved for up to 6 months in the freezer.

At times, the juices and secretions of the meat are mixed with other liquids like red wine.

A range of vegetables, herbs, and spices are added according to the cook’s preferences, with carrots, onions, and garlic all being common.

Worcestershire sauce is another favorite for flavor.

There is a slight trade-off between the moistness of roasted meat and the amount of Jus extracted from it. Jus only forms after the meat has been cooked for a long time.

The fat rises to the surface once enough time cooking has passed and is then skimmed off. If your roast has cooked for too long, it’ll be tough and dry.

Instead of using Jus by itself, we recommend that you supplement with beef stock and various vegetables.

There are so many subtle differences between these two types of gravy that it ultimately boils down to your personal preference.

Jus and gravy are used differently in various parts of the world, but they’re all a quintessential serving suggestion with meat.

Never waste a scrap of meat and, in the process, sacrifice so much mouthwatering flavor by making sure that you always cook up a batch of Jus or gravy with your roast.

Across America, you’ll find the phrase ‘au jus’ being used as a noun. For example, a beef steak with Jus will be called ‘beef with au jus’, whereas in Europe, the meal would be referred to as ‘beef au jus’ directly. 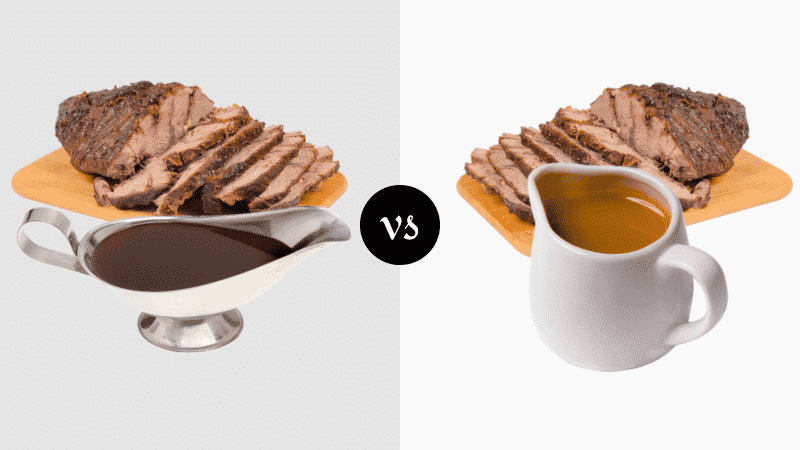