We all know people who love soups, but these soups are incomplete without the thickeners. In particular, the thickening agents are widely used in different recipes. For this reason, we are sharing information about bouillle vs. roux. In this article, we are sharing the information on both these ingredients, so you know the right time and recipe to use them for!

Roux is a well-known thickening agent which is made with a combination of flour and fat. The fats and flour are cooked together to make the stiff texture. This agent can be used in soups, gravies, and sauces. Usually, roux is made with all-purpose flour. In addition, it is made by using protein and starch, which means the thickening agent will be moderate as well. In the case of fat, roux uses clarified butter and has three stages. To illustrate, it has brown, blond, and white stages.

If the starch content is increased in flour, the thickening texture will be increased. For roux, flour is combined with fat and is heated to make a thick texture. The primary reason behind adding fat is lubrication purposes because it softens up the texture. In addition, the integration of flour leads to a smooth texture. When making the roux, clarified butter is used as fat. Particularly, butter is used when making the sauce because it leads to a smooth texture.

In some cases, people also use whole butter, but you might have to skim it during the preparation phase. The skimming will remove the impurities from the sauce. Generally, six-part flour and four parts fat are used to make the roux. In addition, it needs liquid, but the quantity of liquid depends on desired thickness. In some cases, people also add margarine, drippings, meat residue, and oil for making the roux. For the most part, roux is incredibly easy to make and can be used in a variety of sauces.

When making the roux, you have to use the heavy-bottom saucepan because it leads to consistent and even heat conduction. In addition, good conductivity of the pan will ensure roux isn’t burnt (burnt roux can ruin the taste, aroma, and flavor of the soup). For making the roux, butter is melted at moderate or low heat, and then the flour is added. After adding flour, you need to whisk the mixture for around three minutes. Keep in mind that roux should bubble and gain a darker color when it’s cooked properly.

Roux’s color ranges from mild yellow color to golden yellow (it depends on the cooking time). When the roux is cooked, it needs to be cooled down, and then the stock is added to make the gravy, sauce, or soup. Keep in mind that you cannot add stock or other ingredients if they are hot because it can lead to splattering and crackling. However, when you add the stock from the top, the heat level is reduced to a low simmer level and is continuously stirred to ensure smooth and consistent sauce.

You must keep in mind that roux cannot be prepared at higher temperatures because it leads to a lumpy and grainy texture. When the roux is cooled down, it can be poured into a har for storing purposes. Generally, roux can be stored for a few weeks in airtight jars. As far as the roux varieties are concerned, there are three options. The white roux is used for white sauces, while the blonde variant is suitable for velouté sauces. As far as the brown roux is concerned, it can be used in creole and cajun recipes.

Bouillle is the staple food back in Burkina Faso and is widely consumed. Generally, it’s served with every meal. Bouillle is the combination of starch, sugar, and milk, which is boiled together to make a thick sauce-like texture. Usually, bouillle is consumed hot in breakfast. In addition, it is served with sugar and milk. We wouldn’t mind saying that it’s porridge with a mushy texture.

Bouillle resembles egg custard a lot and has a soft texture. In some cases, it also has vanilla added to it for adding the sweet flavor. This is the classic cajun recipe that is consumed as it is. However, some people also add bouillle to food cakes and crumbled cakes. It can be topped with cherries and chocolate syrup and served as custard; how versatile!

Some people also make it in the pie form, which is actually the custard that’s cooked twice. It is made as custard with shortbread-like crust. If you opt for the pie, it is delicious and can be served warm. On the contrary, some people also consume it after chilling, so it depends on your preference. However, it is essential to note down that bouillle will cut into the slice form better if it’s chilled.

When it comes down to the pie, it has the shortbread crust along with the custard in the middle. The crust is made by baking flour, nutmeg, salt, and beaten egg. As far as the origination is concerned, bouillle is the Cajun recipe and is native to Louisiana. It is basically inspired by France and takes up the tart-like appearance.

For making bouillle, the custard mixture is added to the pie shell, and the crust is mixed with egg whites. After this, the tart is baked until the crust gains golden-brown color. As far as the central part is concerned, it has the jiggly center. When it’s taken out from the oven, some people top the edges of the crust with whipping cream (we have already mentioned cherry and chocolate syrup topping).

If you want to serve it as dessert, we suggest that you add condensed milk, almond extract, and vanilla extract because it improves the flavors. In addition, you could add butter to the crust because it makes it moist and soft. The best thing about bouillle is that it can be consumed as dessert as well as breakfast. The bottom line is that bouillle is easy to make and is pretty delicious! 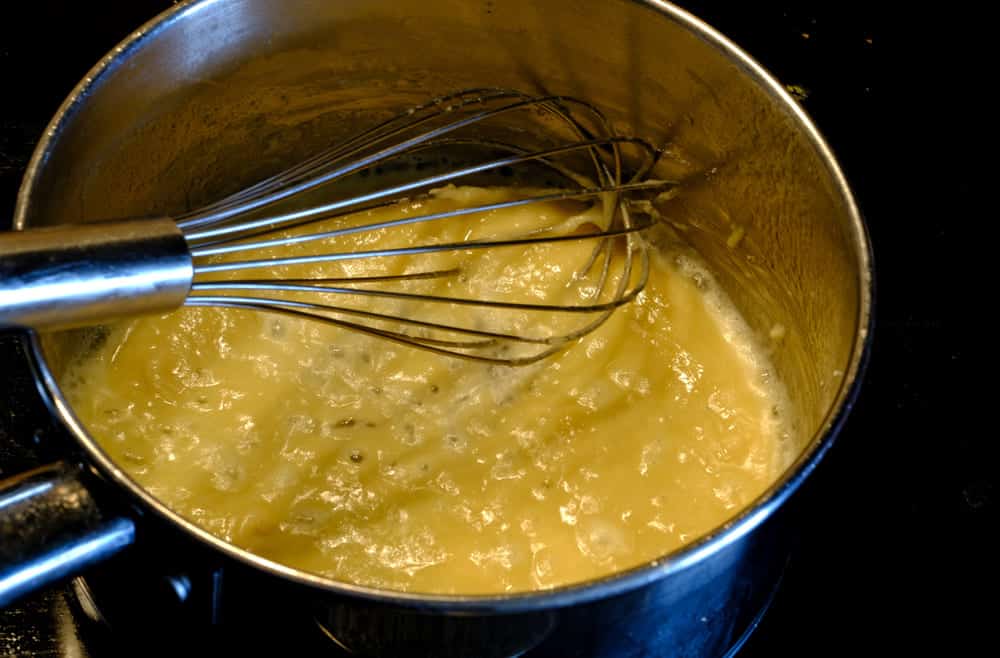