Broth is one of the most important ingredients in most, if not almost all, recipes. This leads many to wonder whether or not it matters if it’s vegetable broth or chicken broth used in any particular meal?

Can you replace one tasty broth with another? Well, there are distinct and subtle differences between the flavor, texture, and more.

We’ve got everything that you need to know coming up in our comprehensive comparison of vegetable broth vs. chicken broth.

You’ll always know exactly which to pick after going through our overview.

Both vegetable broth and chicken broth are invaluable to countless recipes. Despite being similar, there are distinct differences between the two, and we’ve got all the details coming up. 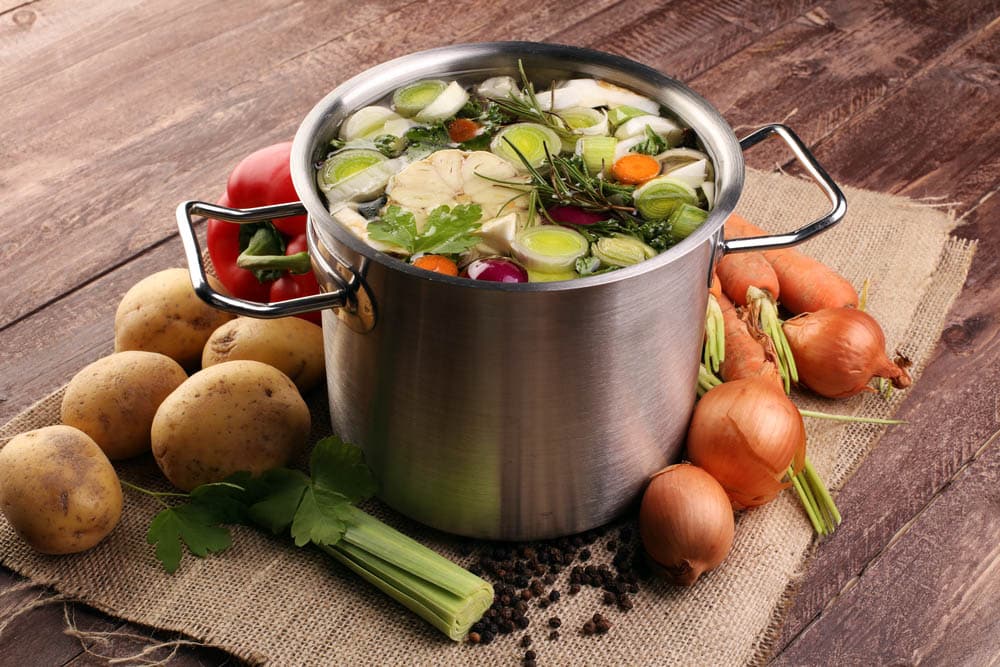 What Is Vegetable Broth?

Vegetable broth is a savory liquid made from boiling vegetables, herbs, and seasoning until mostly dissipated and reduced into flavor infused into the broth, otherwise known as bouillon itself.

Like any and all forms of broth, vegetable broth is rich, thin, and silky, with a viscousness, density, and textured feel to the liquid.

Start by roasting off the vegetables to be roasted and then deglazing the pan. Set aside. Saute onion, garlic, celery, and carrots for roughly five minutes while stirring frequently.

As soon as they have softened, add eight to ten cups of water, the roasted vegetables, and any other frozen vegetables or vegetable scraps on hand. Add two to three bay leaves, parsley, and thyme to the water.

Reduce the heat to low and simmer while partially covered for forty-five minutes to an hour. Strain and the broth is ready.

The number one use for vegetable broth is turning it into a soup. Otherwise, thicken it up and make a tasty gravy. It’s equally as useful as stock in whichever recipes you prefer.

When cooking with fresh vegetable broth, you must be careful about a few things. Firstly, make sure you wash your vegetables properly.

If they are ground vegetables (ones that grow in the soil), soak them in water for a while before washing them thoroughly. This will dislodge any deeply set sand and grit.

Secondly, since we’re boiling fresh vegetables, vegetable broth has a short shelf life and goes stale pretty quickly. Make sure you boil your veggies to make broth the same day you need it or a day before. 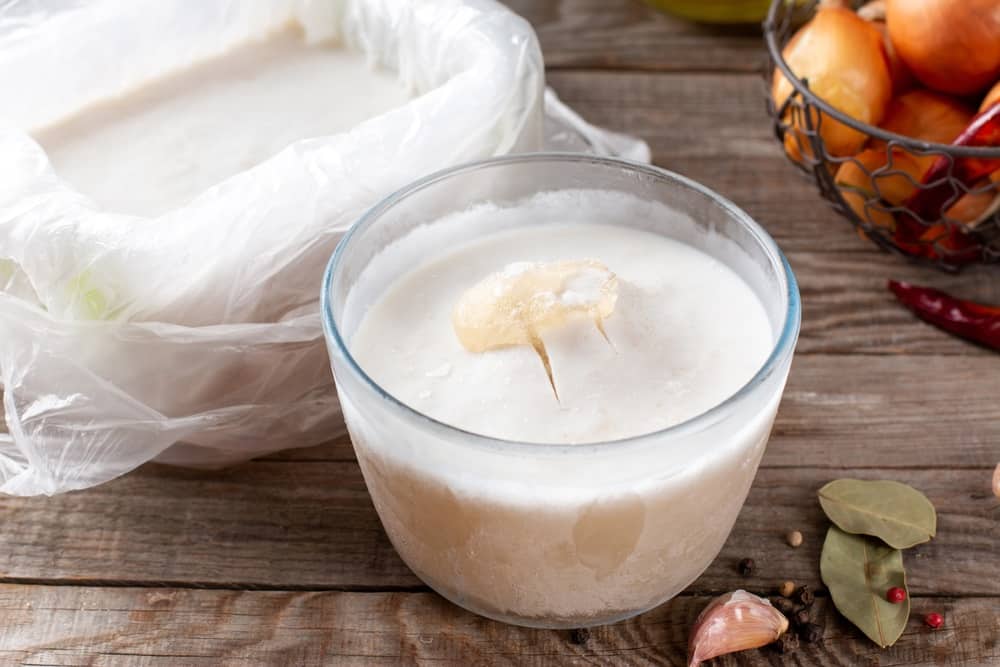 In case you must store it, make sure you use an airtight container and refrigerate the mixture at all times.

Depending on the storage conditions, vegetable broth lasts safely in the freezer for between four to six months.

Immediate refrigeration is, however, required directly after cooling down to preserve flavor and give the broth the longest storage time possible. Refrigerated vegetable broth only lasts for a day or two at the most.

Although fresh vegetable broth is always a better option, you can use ready-to-use broth from the supermarket if you’re short on time. It might not be as good as the fresh broth, but it’s always a worthy alternative.

At times, the taste is a little bland. So, you’ll have to put your chef hat on and add the desired spices to lift the flavor. Bullion cubes work equally as well as canned broth so keep this in mind as a readily available alternative.

At the heart of every good chicken soup, pasta or casserole is a hearty chicken broth. There’s nothing quite like it but a few alternatives that come close. Here is a look at what makes chicken broth so special, how to make it, and how it compares to vegetable broth.

What Is Chicken Broth?

Chicken broth is a savory liquid made from boiling chicken bones, chicken flesh, vegetables, herbs, and seasoning until fused into a rich broth, otherwise known as bouillon.

After the broth has boiled properly, the chicken and bones are stained away. Many chefs prefer to use a chicken that’s already been roasted due to the bold flavor imparted to the broth.

Expect a thin but dense consistency with a gelatinous nature that makes the stock somewhat goopy due to the presence of chicken fat and collagen.

Broth made using white meat only is much thinner than the broth made from a whole chicken. Some chefs choose to include chicken feet in their broth to fortify the stock with extra collagen.

Just keep in mind that this will make the chicken broth much thicker and far more gelatinous.

Saute chopped onion, carrot, garlic, and celery in a little olive or vegetable oil until the onion and garlic turn translucent. Add the rest of the vegetables, and the chicken cut into pieces.

Fry for four or five minutes before adding enough water to cover the chicken. Reduce the heat to low, add the herbs, black pepper, and salt and let the mixture simmer for one hour.

We recommend skimming any fat and scum away from the surface and discarding it as soon as it forms throughout the cooking process. Remove it from the pot once the chicken is cooked and strain the broth. 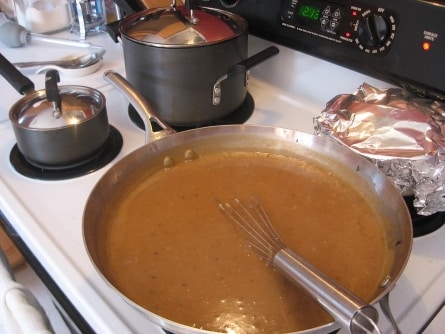 The good thing is that nothing goes to waste when you make a broth. You can use the boiled chicken by shredding and using it in a recipe, or it can be consumed as-is and used as a topping for sandwiches, pizza, and other tasty snacks.

Chicken broth is ideal for turning into soup or gravy, and it’s near irreplaceable as stock in all your favorite meals.

Don’t make the mistake of overcooking your chicken broth. While it’s almost impossible to over boil chicken, boiling carrots, onion, and celery for too long will give the broth a bitter flavor that’s very hard to get rid of or balance with other ingredients.

Chicken broth can be stored safely in the refrigerator for three to four days at the most, but it can be frozen for four to six months or more.

If you plan on replacing the chicken broth with vegetable broth, keep in mind that vegetable broth is slightly sweeter, so you’ll have to adjust the flavor accordingly.

It is, however, a suitably neutral substitute that suits the flavor profile of most meals calling for chicken broth perfectly. 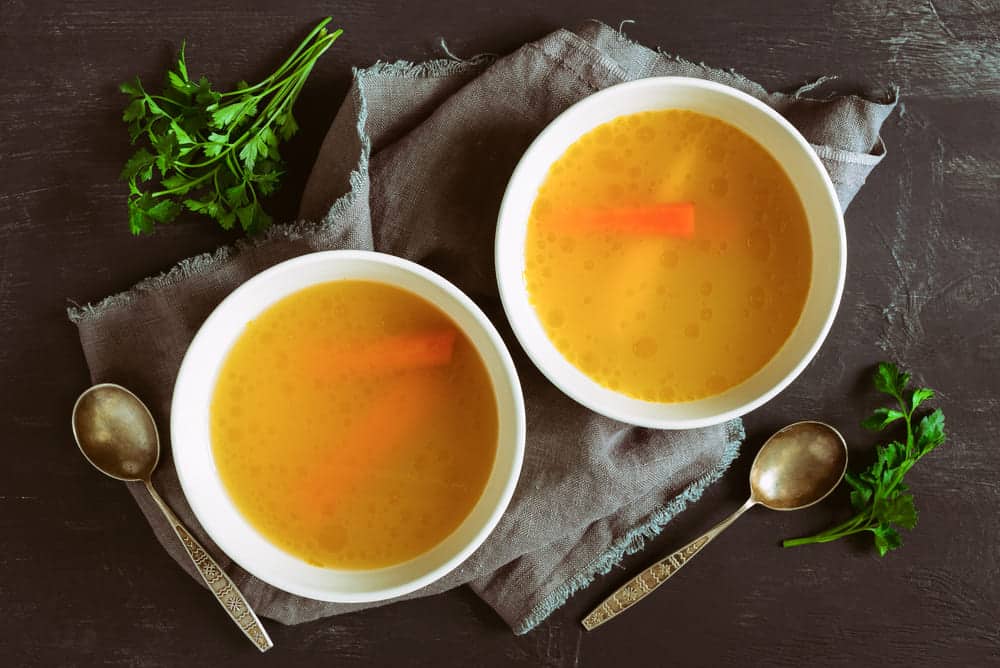 Store-bought chicken broth in a can or chicken bouillon is both worthy alternatives to homemade broth when you’re in a hurry and don’t have any on hand.

What Is The Difference Between Vegetable Broth And Chicken Broth?

Which Is Best, Vegetable Broth Vs. Chicken Broth?

Deciding which is best between vegetable broth vs. chicken broth depends on the flavor profile desired and whether or not you eat meat.

Vegans and vegetarians will obviously opt for vegetable broth, but this doesn’t mean that chicken broth is always the better choice for carnivores.

Chicken broth has a sweet flavor that’s suited to meals that either ply off the sweetness or offset the sweet flavor with sharp tastes. Meals calling for a more neutral stock will do far better with vegetable broth as it is generally far more versatile. 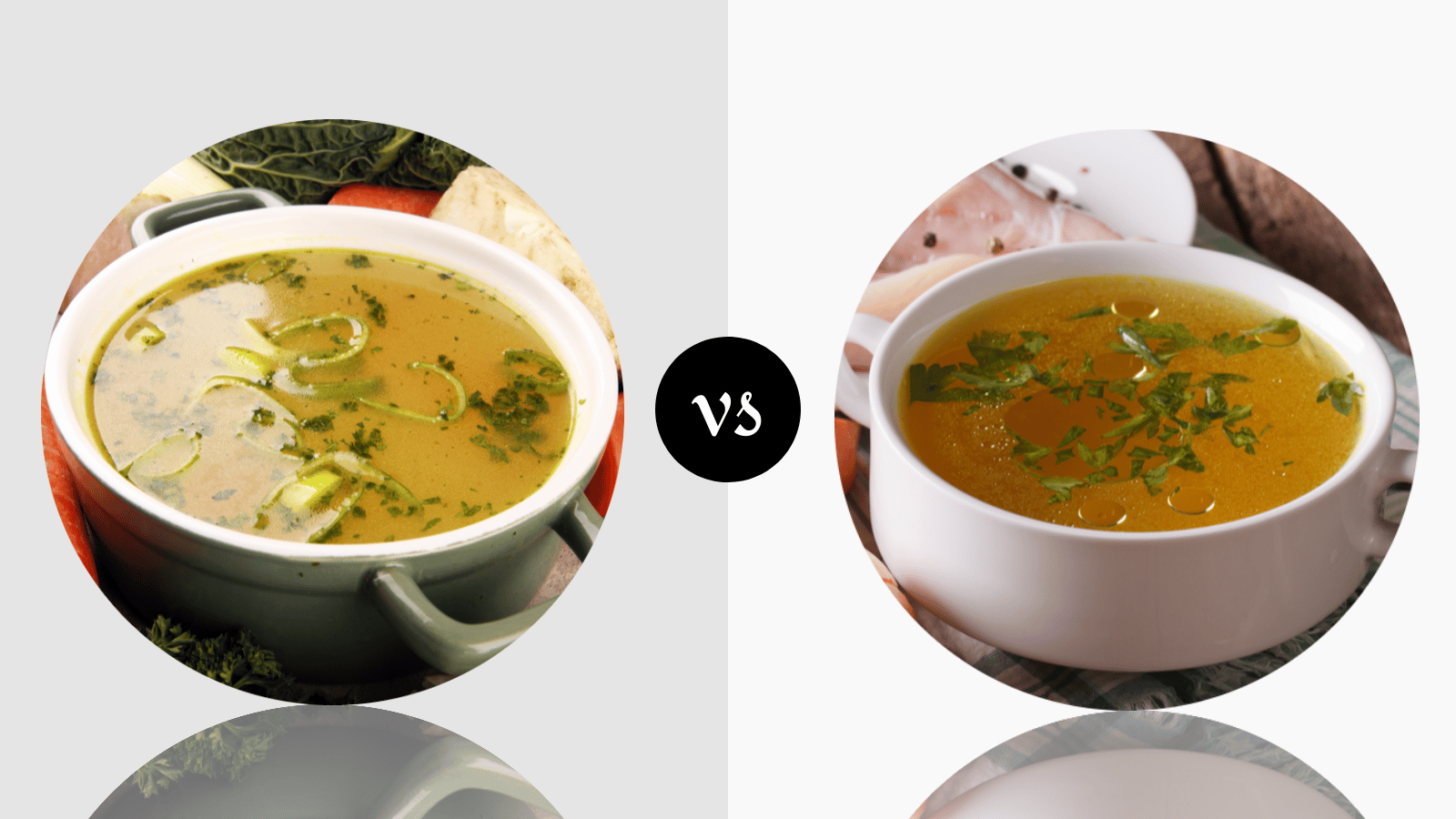