Figuring out what you need in your kitchen can be overwhelming when you are simply thumbing through the catalogs and trying to sort it all out. Here’s a hint: you’re going to want a pressure cooker. It cooks well and quickly. An integral part of any kitchen, you can choose between two types of pressure cookers: a stovetop pressure cooker and an electric cooker. Determining which one is right for you focuses on how you think it’ll be most convenient for your own cooking needs.

A stovetop pressure cooker is the classic one, used since the 1940s. It’s still used in a lot of homes today and, realistically, haven’t gone through very many big changes since. Why fix what isn’t broken, right?

A stovetop cooker is going to be used — you guessed it — right on your stovetop. It looks, for the most part, like a traditional pot with a nonstick bottom and a long handle for gripping. The parts of a stovetop pressure cooker include:

Another option is an electric pressure cooker. Its parts are similar, yet the form is entirely different. As far as popularity goes, this tends to be the preferred method of pressure cooking in the modern-day simply because it uses the help of a computer and smart ventilation in a lot of cases.

You can find all sorts of resources online to help you determine whether a stovetop or an electric pressure cooker is right for you. Traditionally, those who grew up using stovetop ones often trust those more and prefer them. Those who enjoy the idea of following pressure cooker recipes will find that they’re almost exclusively done with electric ones, however.

As far as simplicity, there’s something to be said for stovetop cookers.  Everything can be washed thoroughly and easily dissembled to repair, replace, or just a thorough cleaning after a messy meal. However, electric cookers are also convenient due to the programming and large capacity that makes it great for the modern family.

Most people don’t stop to learn about the different parts of their pressure cooker. Still, when you know what each part does and how it all operates together, you can have a better appreciation for how the cooker works as well as the importance of each one. Plus, knowing what’s wrong and what you need to repair or please is always a nice detail as well. This list of parts should help you out with that. Happy cooking! 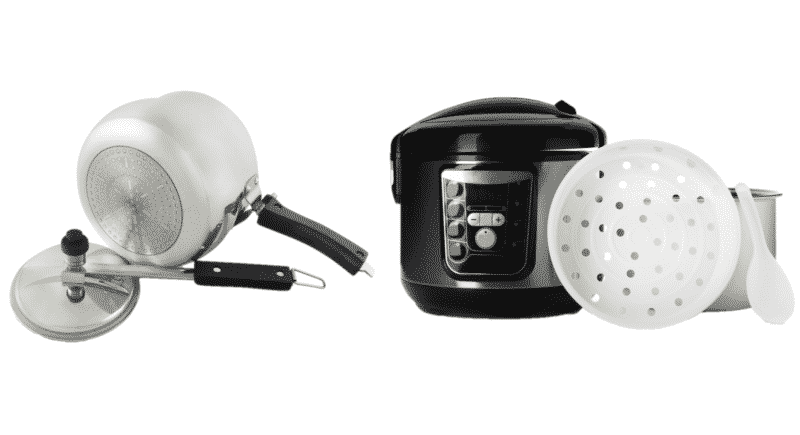