For those who grew up around elderly relatives and specifically grandmothers, the thought of cooking with a pressure cooker may bring back memories of chicken cooking in broth for hours for the perfect soup. There are also some horror stories when it comes to pressure cookers like some that explode up to the ceiling or even cause serious burns. Today’s pressure cookers are quite safe and yield fast results. We can all identify with the need to at times cook fast or employ a certain style of cooking that only a pressure cooker can achieve.

Cook a Whole Chicken in a Pressure Cooker

In a pressure cooker, a whole chicken is going to first be precooked using the steam roasting method. The chicken is prepared by removing the giblets but the neck is left intact to hold together the bird once it has cooked. Before placing the chicken in the cooker, line the base with foil to allow for easy removal after cooking. This should be followed by 2/3 cup water and then the chicken placed on a rack above the level of the water.

After this, the lid should be put in place and placed over high heat to boil after which the heat should be reduced to the lowest setting that will allow pressure to be maintained. After cooking for 25 minutes, the pressure should be allowed to reduce naturally. Save the broth for use in stock and gravy. The next major step of this recipe is to bake the chicken in a preheated oven at 400 F. Bake for 15 minutes or until browned.

Chicken Stock from a Whole Chicken

A whole chicken minus the gizzard and liver should be placed on the rack and covered with water. To allow for easy removal from the cooker, strips of foil should be used under the bird. The lid should be put in place and placed over high heat to boil after which the heat should be reduced to the lowest setting that will allow pressure to be maintained. After cooking for 25 minutes, the pressure should be allowed to reduce naturally. The chicken is ready at this point and should be placed on a cutting board to cool. When it has cooled to safe handling point, remove the skin and debone the chicken, keeping the white and dark meat sections separate.

Transfer chicken to a cutting board. When the chicken is cool enough to handle remove the skin and pull the meat from the bones, separating the white and dark meat. Discard the bones, skin and fat then divide the chicken meat into portions to put in the freezer.

Secure the lid and allow pressure to build up inside over high heat then reduce to low heat just enough to maintain the pressure for a further 5 minutes. Remove the bay leaf, add the chicken meat and then simmer slowly until the meat is cooked through. Season then serving.

After the chicken comes out of the pressure cooker, it has a soft texture and the bite is moist. So soft is the meat that it will easily come right off the bone to eat directly or use in other recipes. Shredded chicken is great for use in sandwiches, salads and many other dishes. To shred the chicken, two forks are used with the backs facing each other. The forks are both placed at the center of a meat portion and gently pulled away from each other to pull the meat apart and into thin strips. Suggested uses for shredded chicken are;

By the time you are removing your chicken from the pressure cooker, you have a lot of broth to deal with. You can make plenty of nutrient-rich stock that can be used to enrich other dishes or even taken on its own as a meal accompaniment or to warm up a dull day. If you would like to make your stock a stand-alone meal, assemble the following;

All this ingredients should be put together in a large pressure cooker and placed on high heat to build pressure. The heat level should then be lowered to maintain the pressure and left to cook for 30 minutes. After the natural release, the stock should be drained through a sieve and the solids discarded. The stock should then be frozen to make fat skimming easily to achieve. 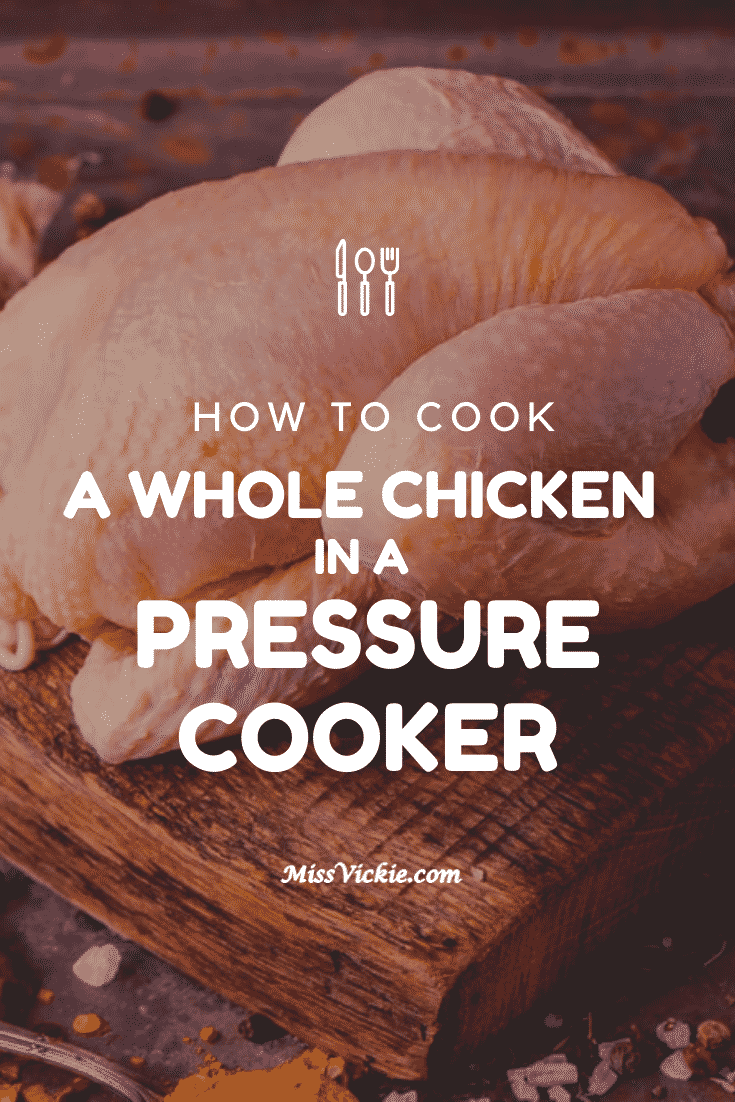