Many of us have found that the most unpredictable counter at the grocery store is often the seafood counter. Seafood is one type of protein that has to be the freshest at all costs.

Finding the freshest fish is always the prime concern when shopping for seafood. Cod is an amazing low-fat fish.

However, there are times when you simply can’t find fresh cod, or even any cod when it’s sold out in stores. This is exactly why you need to keep a range of alternatives for cod in mind.

In this article, we’ll be walking you through a list of some of the best substitutes for cod available. Read on to learn more so that you always know which fresh fish to pick.

What Exactly Is Cod?

Before we introduce the list of cod alternatives, let’s take a look at what cod is and its nutritional benefits.

Cod is the colloquial term of reference for a type of demersal fish from the Gadus genus, making up a part of the Gadidae family.

Most of the cod found sold in markets around the world are Atlantic cod and Pacific cod, although Greenland cod is at times available.

There’s a fourth species called Alaska pollock but this has even lower availability.

Cod has white firm flesh and a firm, flaky texture. The flavor is subtle instead of intensely fishy, making cod one of the most versatile types of fish around.

When cooked properly, cod comes out soft and decadent, taking little more than a few basic ingredients to bring out a satisfying zesty taste.

Finding the best substitute for cod can be quite challenging when faced with the sheer number of options to choose from.

Before finding yourself perplexed, think that the substitute you just picked will go well with your recipe, there are many factors to consider when replacing cod.  Cod is a low-calorie fish with very white flesh.

The size of each fillet, mild flavor, and general shape all make a difference to the recipe you’re preparing, leading to indecision. Keep these factors in mind, and pick from our upcoming substitutes. 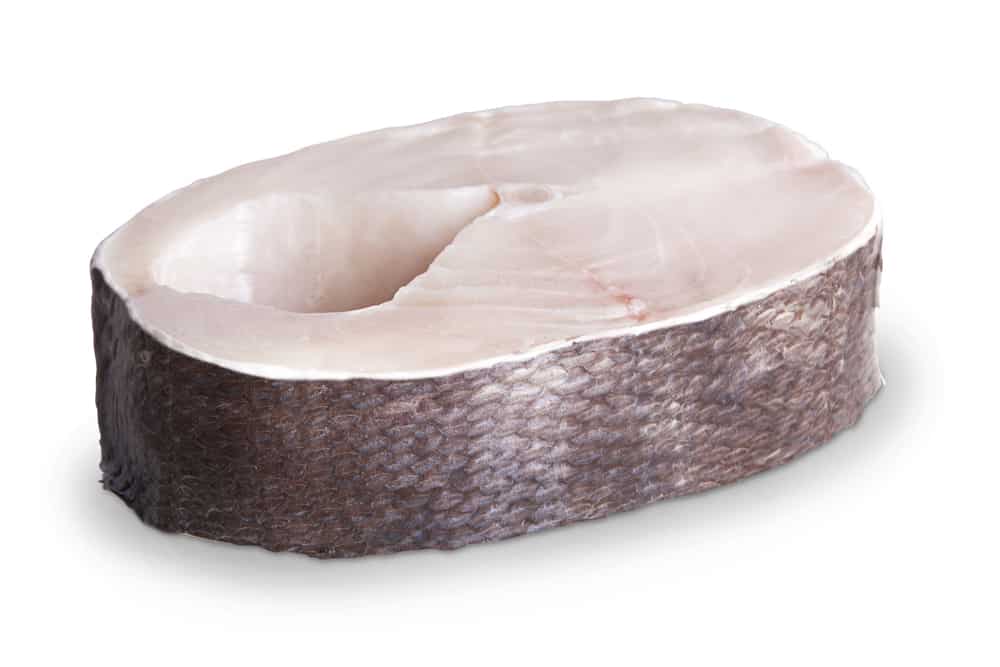 The sablefish is a species commonly farm-raised that is most often referred to as black cod even though it’s not actually part of the cod family. Black cod is part of the Anoplopomatidae family.

Its white flesh and high oil content make it the best substitute for cod when you can get your hands on it.

The buttery flavor is more moist than cod, but the inherent oils rich in Omega-3 fatty acids make black god great for barbecuing and smoking.

Even after extensive cooking, sablefish whole fish and fillets remain moist. In terms of fillet size, you can expect large to massive cuts on average, with all flesh granting large flakes.

Most find black cod to be the most convenient substitute for cod, compared to everything except the calorie count which is just a touch higher.

2.    Haddock – The Nearest Alternative for Cod 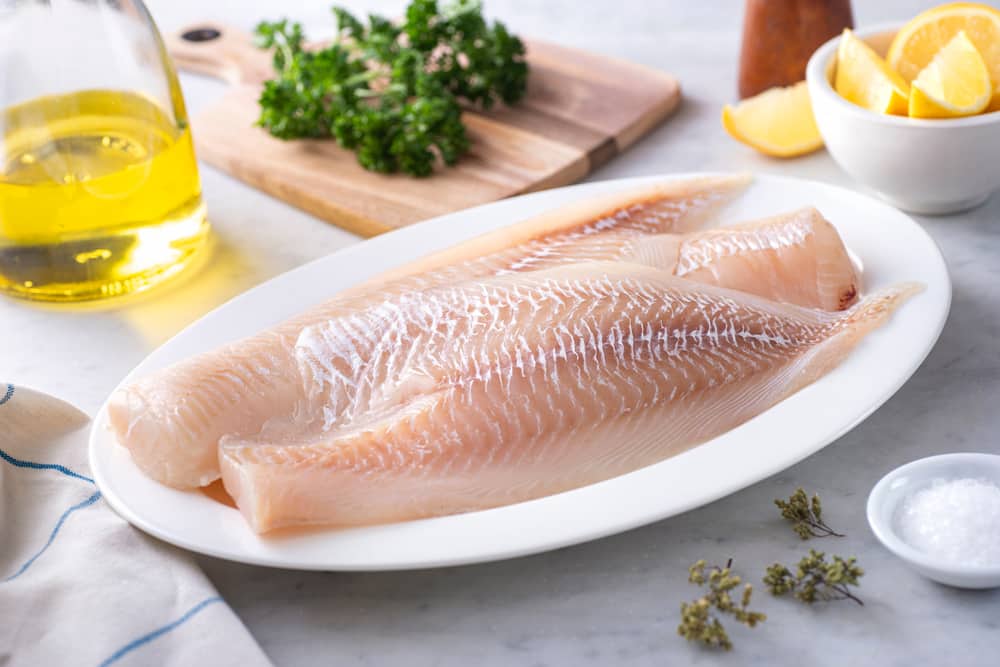 Haddock is a smaller relative belonging to the same class as cod, Gadidae. Haddocks are salt-water ray fishes that are equally nutritious as cod.

They are low on fat with a mild flavor, making haddock one of the closest substitutes for cod. The flavor is similarly mild with a slightly sweeter taste.

Expect far smaller flakes and a denser texture as cod is fatter and bigger than haddock. Fillets will, of course, also be smaller and not as thick.

While haddock is versatile enough to be grilled, barbecued, fried, or otherwise cooked, keep in mind that it has a lower oil content than cod which means it’ll need less cooking time.

The taste and texture are slightly different with haddock packing more flavor than cod, but it still makes a close alternative nonetheless.

3.    Pollack – A Healthy Substitute For Cod 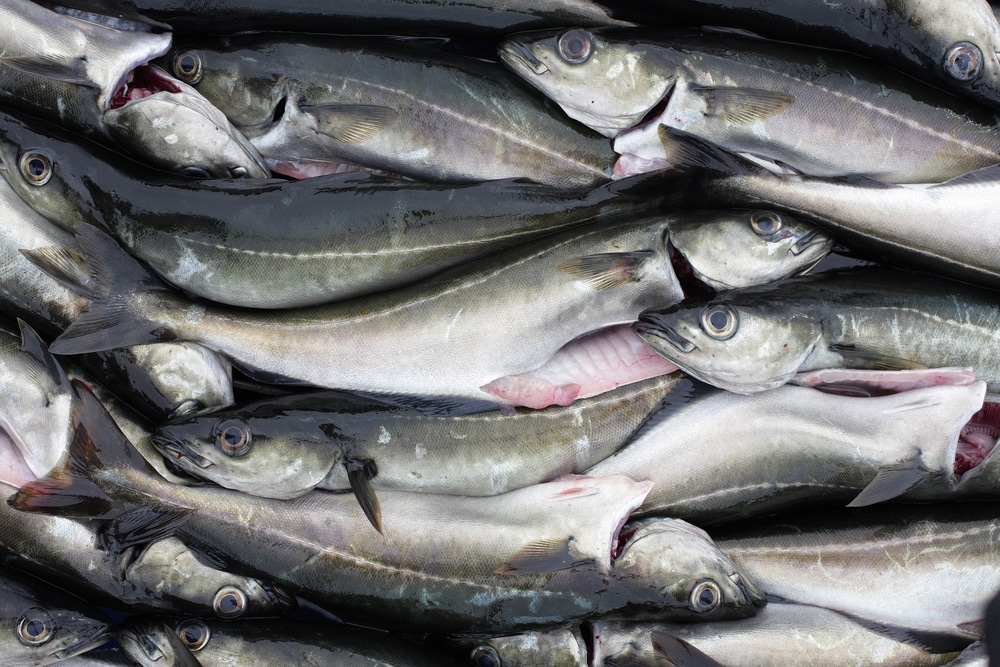 Pollack is a go-to alternative for cod. You may easily swap them in most cases. Pollack, or pollock depending where you’re from, is a large strong-flavored whitefish that’s more affordable than cod and haddock.

While fresh and frozen fish can typically work if you’re pressed for availability, pollock is a variety that you don’t want to eat frozen if you’re averse to a strong fishy taste.

The already prominent fishiness becomes even stronger. This being said, the distinctive taste is welcomed by seafood fans and is often used as a key ingredient in mock crab meat and commercially produced fish fingers.

The flesh isn’t white like cod but instead an off-grey color, and pollack is versatile enough to be served in just about any form from barbecuing to broths.

You’ll find pollack served in many restaurants because of its true white fish flavor and the immense complexity of taste.

4.    Hake – A Compatible Alternative For Cod

Hake has a high nutritional value and is low in saturated fats while carrying supremely versatile flaky fish which makes it one of the most comparable substitutes for cod.

As a member of the cod family, the flavor and texture of the flesh are very similar. Expect firm, flakey, pale white flesh with a mild fishy flavor.

It’s among the most decadent flesh you’ll find, with just enough moisture when cooked right.

Hake varies in size but you’ll typically find fillets that are noticeably smaller than cod with smaller, more delicate flakes. The medium-sized fillets are still, however, substantial.

Most find the mildness of flavor is comparable to the texture is softer, with a slight coarseness to its grain. Just like cod, there are endless ways to serve hake and it holds up well when being barbecued or smoked.

As soon as the flesh turns opaque, your hake is perfectly cooked so pay attention and don’t let this tasty fish dry out.

5.    Grouper – Another Good Substitute For Cod 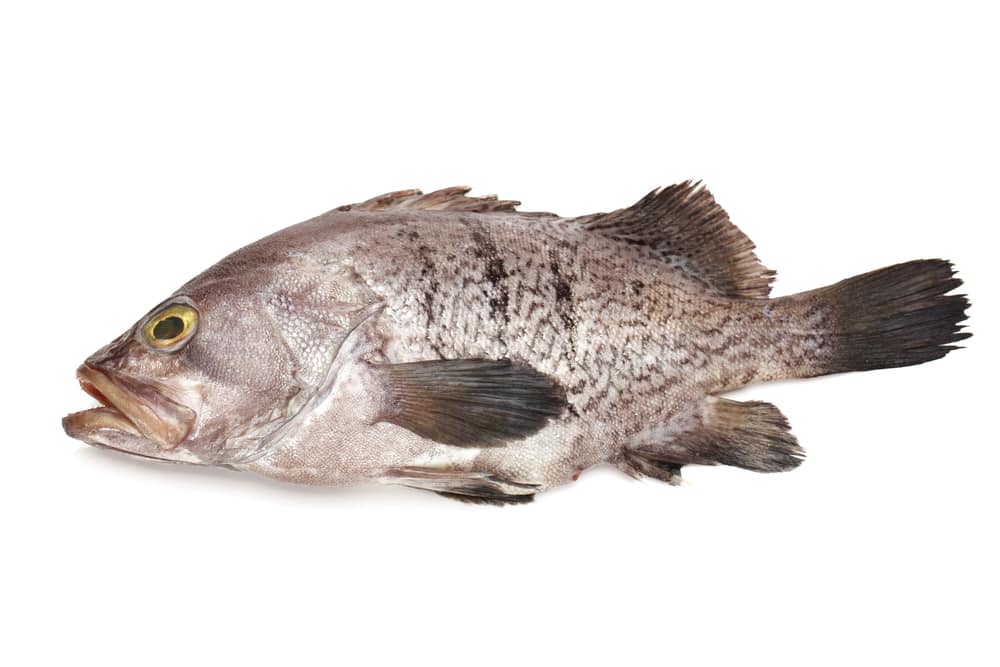 Many different types of fish classify as groupers. This part of the Sea Bass family is one of the most widely available, affordable types of fish.

There are certain varieties like the Black Grouper which are more difficult to source and limited in quantity but red grouper is an easy-to-find alternative to cod in most areas of the world.

Both Red and Black Grouper have lean, bright white flesh. This should be your number one cod substitute if you like the taste of lobster, as the flavor profile is similar.

Grouper is a much smaller fish with fillets that are roughly a quarter the size of the largest Atlantic cod. Expect a mild but distinctive taste with a slight sweetness.

The level of intensity, or strong fishy flavor, is most similar to a midway point between Sea Bass and Halibut. The flesh remains firm, providing large, heavy flakes that retain their moisture well while cooking. 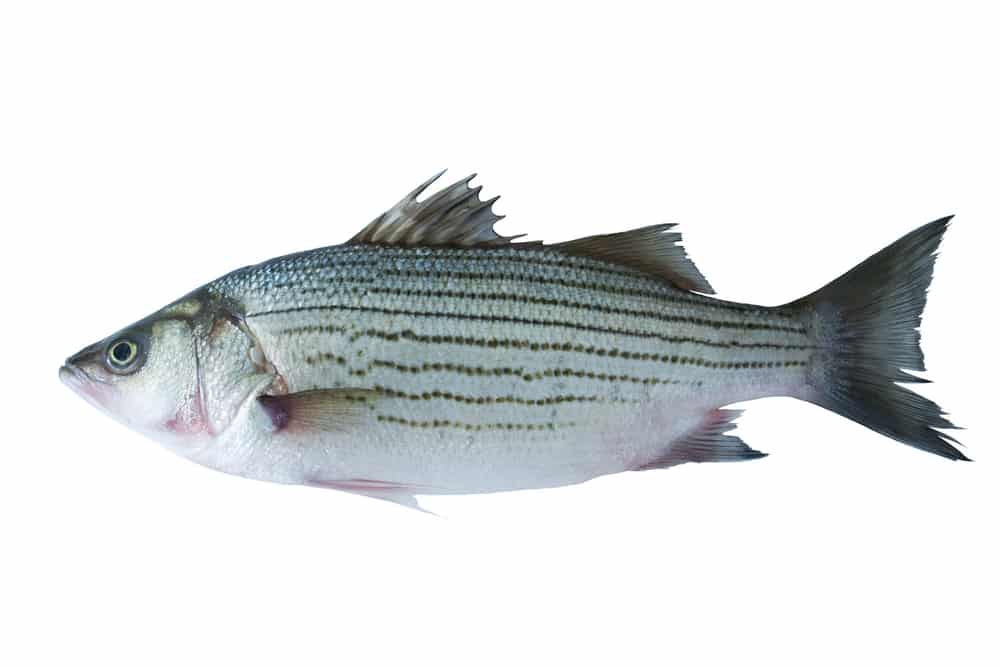 Atlantic striped bass is one of the most sustainably managed alternatives to cod available. These fish found typically in saltwater are anadromous and adapt to freshwater as well.

This also means that striped bass cooks very quickly. Go for striped bass as your cod substitute if you prefer a light seafood taste with absolutely no risk of it being over-fishy.

Expect firm, flavorful flesh and large flakes similar to cod. Although Atlantic cod do grow a little bigger, striped bass is close in size and weight.

The fillets are therefore comparable in size and thickness, with a moderate degree of fattiness that’s on par with cod but not as fatty as black cod or pollock.

7. Tilapia – Pick The Right Tilapia For A Wonderful Cod Substitute 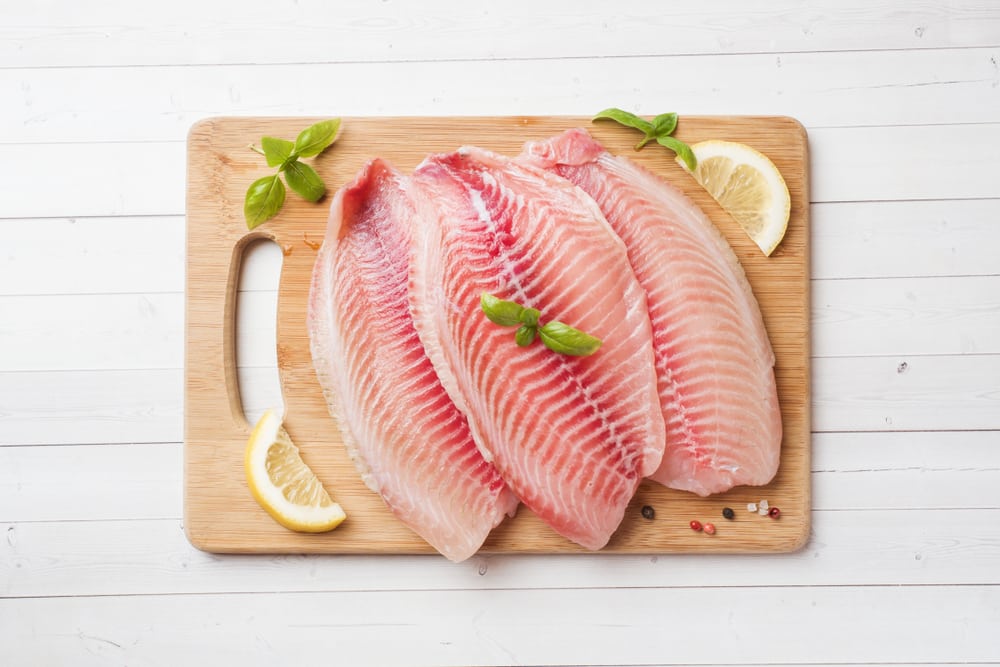 With a yield, color, mild flavor, and supremely greater affordability, tilapia is a popular substitute for cod.

The small size means that you won’t be able to use it in every meal but if you don’t mind the tiny fillets or serving a whole fish, make tilapia a definite consideration.

While fresh fish is always recommended over frozen, processed alternatives, those who are looking for larger fillets should be on the lookout for deboned processed tilapia fillets that reconstitute ground meat.

It is very important to ensure that you source tilapia that’s been sustainably farmed so that no off-flavors ruin your taste experience.

Certain species bred by breeders with poor aquaculture result in an off-putting taste that can only be described as ‘muddy.’

With the right tilapia, you’re rewarded with lean flesh with a mild flavor and sweetness similar to hake. The flaky texture compares to cod, while a medium-firmness makes it just as versatile.

8. Gurnard – Some Of The Tastiest Flesh But Small Fillets 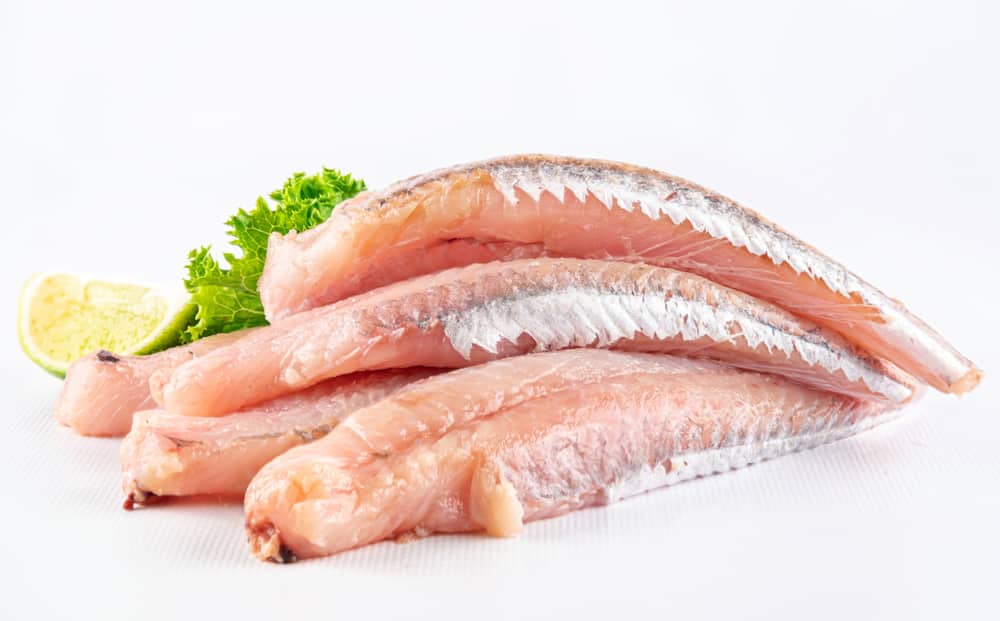 Gurnard is more readily available in Great Britain, South Africa, and other coastal regions of the world than in the USA, but you do still find it fresh. Gurnards are officially termed Triglidae.

These bottom-feeders are also known as sea robins and are loved for their firm white flesh that retains its form well. The flavor is mild but unique.

Despite the boniness and moderate to slim yield, the texture comes very close to cod, and some prefer the flavor.

Compared to cod, gurnards are tiny fish. You won’t be able to use this cod substitute in all places but when you do find gurnard fresh don’t let the opportunity to taste this succulent seafood pass you by.

9. Halibut – A Reliable Substitute For Cod And Whitefish 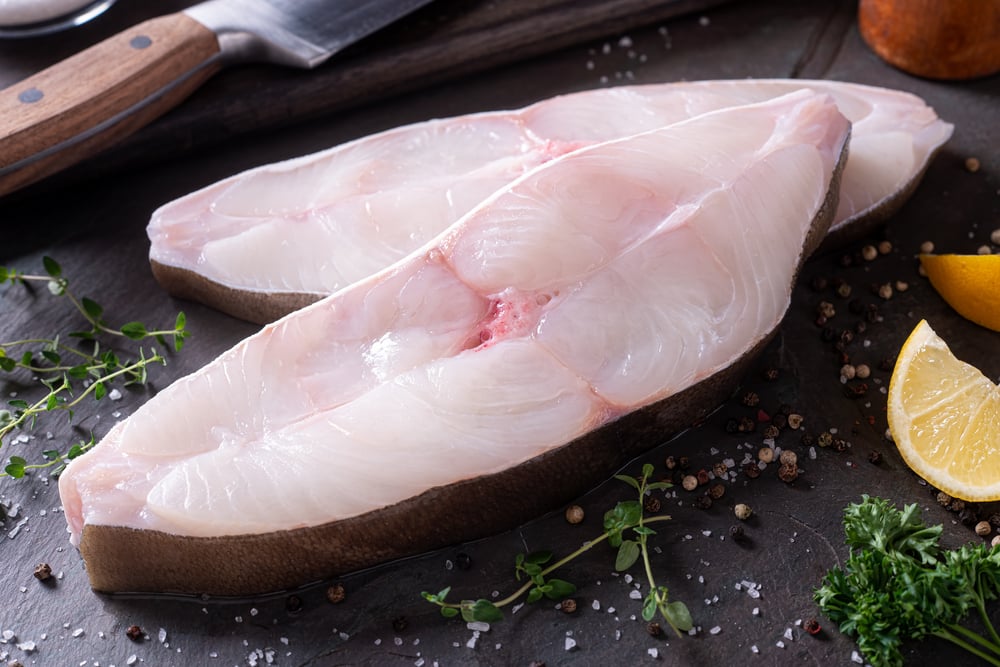 All three varieties of Halibut are flatfish that you can use in the place of cod while keeping the texture and flavor profile relatively similar. These massive fish have large fillets.

To give you an idea of just how big Halibut gets, whole cod and pollock have been found inside their stomachs. If you are in the mood for a massive fillet, there’s no better cod substitute available.

The best way to prepare halibut is grilling, deep-frying, and boiling. Smoke and barbecuing don’t work as well because, unlike cod, halibut is lean with ultra-low levels of fat.

While the taste of fish is a little stronger than cod, halibut is still mild and clean enough for those who aren’t overly fond of seafood.

Mahi-mahi is a popular, pricy type of fish with lean, flavorful, firm white flesh. Otherwise known as the common dolphinfish or dorado, mahi-mahi are ray-finned surface-dwellers that are extremely lean.

While the fat content doesn’t match up to cod, the flesh does. Expect similar-sized flakes. The large flakes have a taste of their own which is stronger than cod but milder than swordfish.

Most mahi-mahi grows to just over half the size of cod, giving you a good idea of what size fillets to expect.

Unlike cod, mahi-mahi’s flesh ranges from pink to beige, and the cooked flesh will not be pure white. Compared to our other options, mahi-mahi is a more fishy-tasting fish.

Keep this in mind when substituting for those who don’t eat seafood regularly.

Cod is a fantastic species of fish with a mild but satisfying flavor that just about anyone can fall in love with. Each of these fillets will come close, but fresh cod is a delicacy you shouldn’t pass over.

Similarly, every one of the varieties of fish listed here has distinct tastes and flavor profiles that will suit certain methods of preparation better.

Who knows? You may even discover a new favorite fillet to use in one of your family meals. 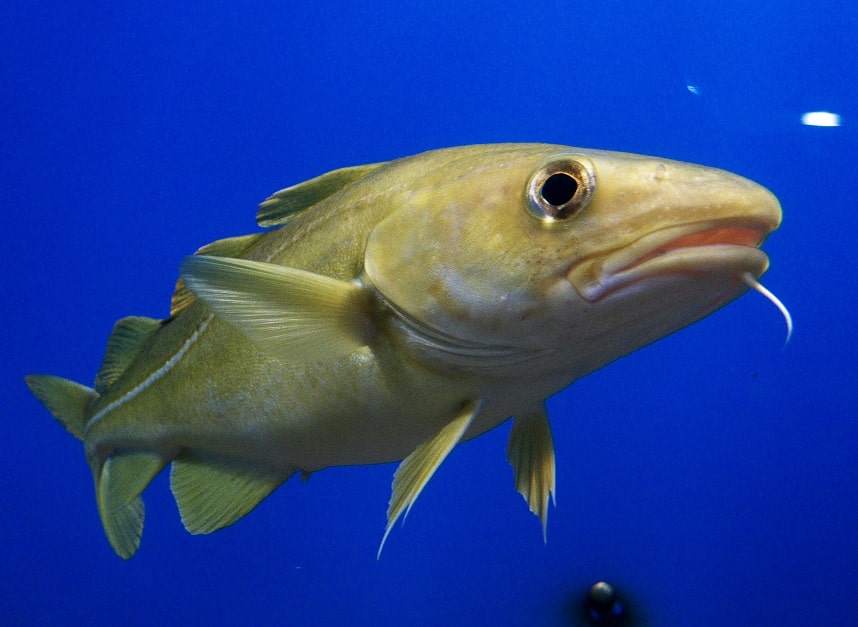