Everyone wants to have tender, juicy, delicious, and perfectly cooked meat. This is especially true of pork which for health reasons must be well cooked.

Many people use barbecue because it seals and caramelizes the meat outside while maintaining its juicy succulence. But have you ever thought of using a slow cooker for the same task? Slow cookers are very efficient when it comes to preparing juicy, tender meat.

Slow cookers might not give the same effect as a barbeque, but if you learn the right way to use a slow cooker for preparing pork shoulder, then you can prepare your favorite pork meal in a way that will exceed your expectations.

You can add more flavors to your meat by carving or pulling it, adding sauces, and then rolling it up into burritos or serving it over rice. Alternatively, you can add it to some vegetable dishes such as stir-fries.

Pork Shoulder is Not the Same Cut as Pork Butt

Firstly, please don’t let the name “pork butt” confuse you. Pork butt comes from the forequarter of the pig, just above the shoulder. It does not come from the pig’s butt!

Both the shoulder and butt are interchangeable in recipes. They are both quite fatty, fairly tough cuts that lend themselves to long, slow cooking.

Whenever you purchase a large piece of pork like pork shoulder or butt, you will notice a fat cap or a layer of thick white fat lying on the top of that meat.

This fat layer can be of a variety of thicknesses. If you’re going to barbeque the meat, it is good to leave some of this fat layer to preserve moisture.

However, for our purposes in the slow cooker, you can go ahead and remove most of it. You can ask your butcher to do this for you if you prefer.

Cooking Pork Shoulder Fat Side Up or Down in Slow Cooker

Cooking with Pork Shoulder Fat Side Up

Now that you have removed the excess fat, the question remains: do we cook the meat with this fat cap facing up or down? Some people prefer cooking with the fat cap lying on the upper side.

They do this because it is believed that it allows for the melting of the fat, which can then penetrate the meat and add more flavor.

However, the professionals say that the fat will not penetrate the meat because the meat is majorly water and fat is hydrophobic. The two will not mix.

However, if you’re cooking your pork on the barbeque, cooking it with the fat side up does allow the melting fat to run down and baste the meat, keeping the moisture locked inside.

Halfway through cooking, you can go ahead and turn it over to allow the fat to caramelize and crisp up, creating a delicious, sticky, golden layer. The slow cooker is a different story, however, so read on to find out why.

Cooking the Pork Shoulder Fat Side Down

We advise you when cooking your pork in the slow cooker to turn its fat side down. This way, the fat will provide a thin, insulating layer between the heat source and the meat.

This will allow the meat to cook slowly and tenderize beautifully. The fat layer will slowly melt into the marinade or sauce, lending a silky richness to it.

An alternative way of slow-cooking your pork is to first brown the meat, including the fatty side, in a pot over high heat. Use a little oil to start the process.

The goal here is not to cook the meat but to create a brown caramelization on the outside, which will help seal the meat juices and provide color and umami flavor.

Once the meat has browned, transfer it to the slow cooker, adding the sauce or cooking liquid. Again, we advise putting it in with the fatty side down.

Hopefully, our quick guide has given you some clarity on which pork cuts to use for slow cooking and whether to cook them with the fat side up or down. Goodbye until next time. 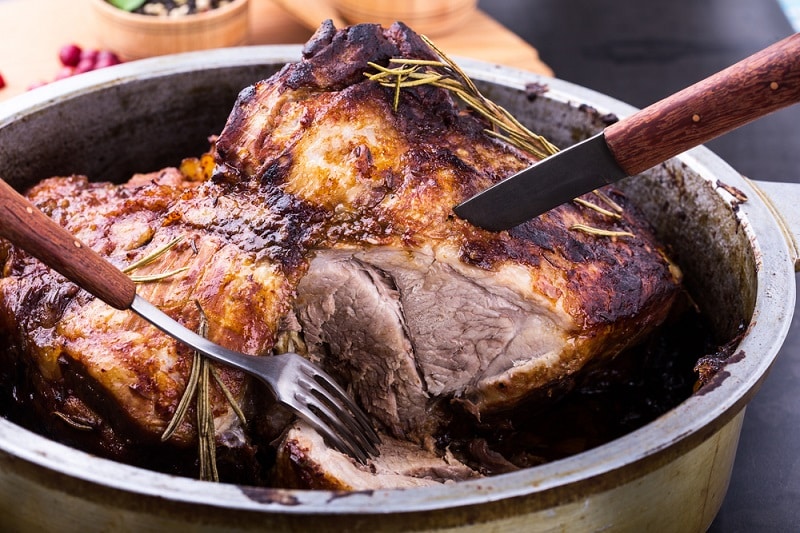