The demand for meat cuts in the market is always high. People enjoy consuming meats prepared in different ways. In the meat market, you can find consumers asking for tender or tough meat cuts. Some people buy a little bit of each meat cuts for different purposes.

What Makes Meat Tender Or Tough?

What makes these meats have different textures? In this article, I will be writing about the different meat cuts, and factors that make some meats tender or tough.

Identifying the most tender meat cuts in the market

The meat cuts from short loins are very tender. You can find these meat cuts easily because they are labeled accordingly. Alternatively, ask the meat seller for cuts from the short loin.

Next, on the list of tender meat cuts are the ribs. You can get considerably tender meat cuts from the ribs. These parts are also tasty when you use herbs and spices which are easily absorbed by the meat because of its tender texture.

The meat cuts from sirloins are also tender. These meat cuts are in high demand because of the tender texture, which makes it easy to pressure cook the meat.

However, if you plan to use a recipe that requires pressure cooking the following meat cuts should be at the top of your list;

Meat cuts from the rounds always come out perfect when you pressure cook following specific instructions in your recipe.

The chuck is part of the subprimal cuts. In the market, you can find the meat cuts from chuck labeled as the 7 -bone steak. The chuck cuts are excellent for pressure cooking. You can use different cooking times to get amazing results with a pressure cooker.

The meat cuts from the flank usually have no bones. The meat is cut from parts below the loins. These meat cuts are quite tender; however, you can get different levels of tenderness by pressure cooking.

The meat cuts from the plate are known for their fat content. This meat cut is perfect if you plan to get some gravy for stews or soups. Pressure cooking this meat cut will remove the fat tissues as the meat becomes tender.

Some meat retailers offer premium services to customers. You can make pre-arrangements for tender or tough meat cuts. This way, you can get the best parts as selected by your vendor.

How does collagen determine the texture of meat?

The texture of meat, to a large extent, is influenced by the amount of collagen in that part of the meat. Collagen can also be found around bones and other fleshy parts. It is the connective tissues that make the meat cut tougher. This means meat with lots of collagen should be very tough. Such meat cuts can be cooked to become tender in a pressure cooker.

We can conclude that some meat cuts are tougher because they have higher levels of collagen than other parts of the animal. When cooked under pressure, different things happen to the meat cut, eventually making it tender. The process begins with a breakdown of the proteins in the meat. At a higher temperature, the collagen starts to contract and eventually becomes gelatin, which is a softer form of cooked collagen. At this point, the meat cut loses a significant amount of moisture.

Some people have a habit of classifying the quality of meat based on its tenderness. Tough meat can also have a high quality because, after pressure cooking, these parts become very delicious since they have become tender and can absorb a lot of the spices and herbs used for cooking. However, tough meat cuts cook longer than tender meats. Since meat loses moisture when cooked for longer periods, you can ensure enough liquids are added to ensure the texture is not too tough after cooking.

Another reason some meat cuts are tender is the age of the animal that has been slaughtered. Younger animals have tender meat when compared to older animals. Butchers intentionally slaughter younger animals to get tender meats for sale. Cows are generally slaughtered when they are matured because the butcher can get more meat from the carcass. The meat from cows has a varying degree of tenderness depending on the part of the cow it was cut.

However, pork meat is usually tender because pigs are slaughtered when they are younger, compared to the age of cows are slaughtered. If you are in the market for tender meat, you can consider buying pork.

In conclusion, the tenderness or toughness of meat cuts depends on the collagen content in the meat, the age of the animal and the parts from which the meat is cut for sale. Also, the cooking time can influence the texture of meat regardless of how it feels before cooking. Pressure cooking meat is suitable for tough and tender meat cuts, which can also be cooked using different methods such as boiling, steam roasting, or braising. 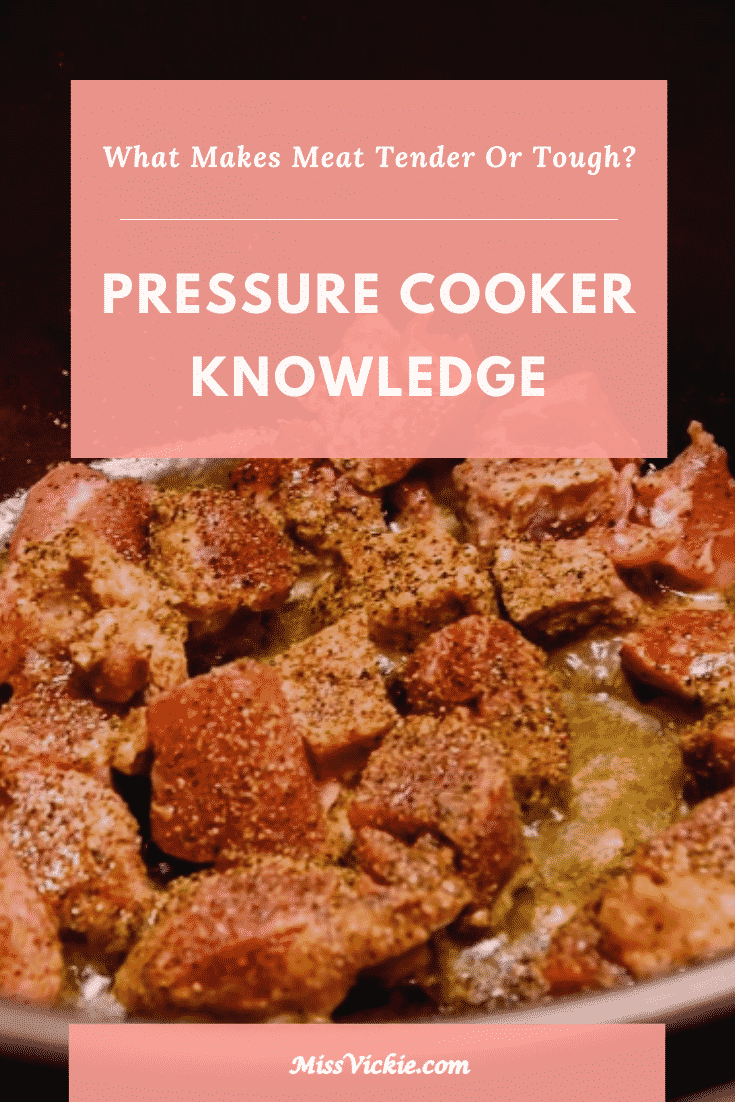