The air vent on your Instant Pot is one of the most critical safety parts of the cooker. You must know how it works and how to use it for both pressure and slow cooking on your Instant Pot. We’ll tell you all you need to know about it in today’s article and will also share a few important safety tips.

How Does the Vent Work?

The vent is located on the lid of your Instant Pot. It automatically releases heated air from inside the pot. Once the pressure builds up, the air vent cover will slide up and lock the lid in position with the lock pin.

Looking at the Lid

How to Quick Release the Pressure

This will quickly release the pressure in the form of steam from inside the pot. It usually takes a couple of minutes to release it all through the vent. Be careful – it’s hot!

Once the floating valve has dropped right down, you may open the lid. We use the quick release method to stop the cooking process fast to prevent food overcooking. It is useful for food like vegetables and seafood that cook quickly.

The quick-release method is not suitable for food that contains a lot of liquid, such as soup, as the liquid may bubble out of the pressure release valve. It is also not suitable for recipes that have been designed for long, slow cooking as the food may turn out undercooked.

How to Natural Release the Pressure

This method allows the pressure and steam to naturally release over a longer time as the food cools down. Once the cooking cycle is completed, leave the Instant Pot until the floating valve drops before you open the lid.

Then, just before opening, turn the venting knob from the sealing position to the venting position. This ensures that every last bit of pressure has been released before you open the lid.

The natural pressure release method usually takes between 15 and 30 minutes, depending on how much food is inside the pot. We use the natural release method for food with a large liquid volume like soup and foods that need a long, slow cooking, such as beans and porridge.

Because the pressure is released gradually, the food continues cooking slowly. This means that if a recipe has been designed for the quick-release method, the food may turn out overdone.

We have noticed that several people online have been sharing Instant Pot tips that include recommending covering the vent during pressure release.

While we see why they may want to do this (to prevent mess and a steamy kitchen), we advise you NOT to cover the vent with anything such as a paper towel or dishtowel. The reason is that the steam release vent is the Instant Pot’s main safety regulator, and blocking it may cause a problem.

In addition, most pressure cooker manuals explicitly say not to cover the lid or vent. We quote here from the Instant Pot DUO user manual: “Do not cover the pressure valves.”

Safe Alternatives to Covering the Vent

Rather than covering the vent, follow our safe methods. We recognize that when you are cooking in a small area, a big steam quick-release from your Instant Pot at the end of a cooking cycle can be messy and inconvenient. Here are some alternatives:

What If Food Sprays Out of the Vent?

First of all, don’t panic! Food should not come out of the vent during pressure release, but it is not a disaster if it does. Here’s how to prevent it:

For pressure cooking, do not fill the pot more than halfway for foamy foods and no more than two-thirds for other things.

Once the lid is open, clean the entire lid, gasket, and valve very well so that there is no food residue left to make the valve stick the next time the pot is used.

We hope this article has given you a little more insight into how your Instant Pot vent works and why it is such an important component. Please remember, never cover the vent. Also, it is never safe to remove your Instant Pot’s lid until all pressure has been released through the vent.

You will know it is safe to open the lid because the floating valve will drop. This shows that all the pressure has dissipated. Do not ever try to force the lid off the pot – it locks for a reason. Instead, walk away and leave the pot to cool down for half an hour. Be safe, and we hope you enjoy your Instant Pot! 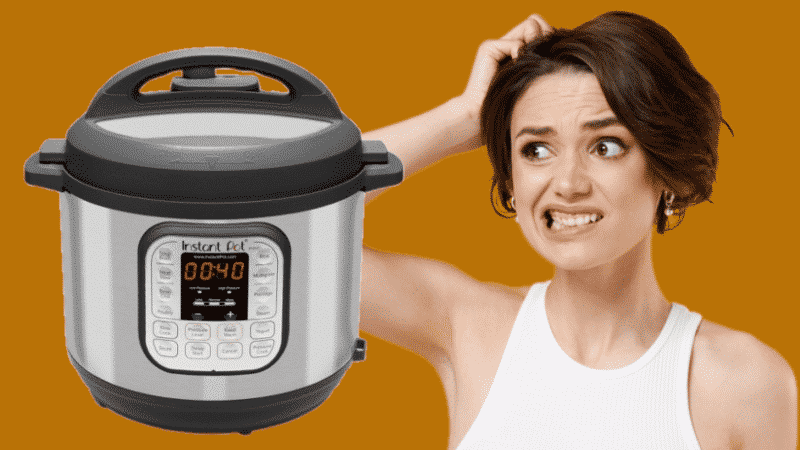