Modern technology has made life very easy for people who like to cook. Thanks to an array of new appliances and tools, one can easily make different dishes without going through all the trouble.

Not only does modern technology reduce the amount of mess you might create in the kitchen, but it also offers convenience and comfort, and it has led to one of the most significant improvements in cooking.

One of the most innovative appliances to have been released recently is the Instant Pot. The Instant Pot is, at its core, a pressure cooker.

However, it comes with a whole array of bells and whistles that combine to provide one of the most innovative cooking appliances.

Needless to say, the Instant Pot was an instant hit. It is now found in homes worldwide, and it is an excellent choice for people who don’t want to spend long hours standing around in the kitchen.

It comes with an array of settings and attachments that you can use to make a wide variety of dishes. However, this is only the case when the Instant Pot, you know, works.

Instant Pot Not Turning On When Plugged In

Are you having an issue where you find your Instant Pot not turning on when plugged in? The Instant Pot is an expensive appliance, no doubt about that.

It can be a bit of a shock to an average person to plug in their Instant Pot, only to find that it’s not working anymore.

Thankfully, there are a few ways to fix the problem. Instead of panicking and taking the appliance to the repair vendors, you might want to follow the tips given below.

What to do when your Instant Pot doesn’t turn on

There are quite a few newbies to the Instant Pot world looking for advice when their appliance won’t turn on.

If you have carefully checked the appliance from top to bottom and realize that it’s simply an issue with the power, it might be a wise idea to follow the tips given below to troubleshoot the problem.

Sometimes, the cord end that connects to the machine wears out, and it doesn’t create a stable connection within the appliance. In this case, the Instant Pot won’t turn on.

Inspect the cord visually to check for wear and tear signs and then plug it securely back into the pot. Please give it a wiggle, too, as sometimes it looks like it’s plugged in, but it isn’t.

It seems silly, but sometimes an outlet might be causing the problem.

It happens a lot more than people might think, so don’t forget to try the pot in another outlet so that you can rule out the fact that it is the outlet itself.

You don’t necessarily need to use the Instant Pot on that second outlet; try it out to see if it powers on.  If it does, the problem is the outlet.

Please don’t tamper with it on your own; it’s best to let an electrician take a look at it.

Instant Pots require a great deal of power and produce a lot of heat.

Sometimes, especially when combined with other devices on the same circuit (usually in the kitchen), there is a blown fuse risk.

In this case, you’ll want to reset the panel and, if needed, replace the fuse with another one.

In some models, this fuse is replaceable by hand, but you will find it difficult to replace the fuse by yourself in most cases.

If you think it may be a blown fuse, consider visiting the official website for more information or taking it to a repair shop or other venues to make sure it’s alright.

If you don’t know much about the Instant Pot, it would not be a wise idea to tamper with the appliance on your own.

You might end up causing irreparable damage to an expensive piece of kitchen equipment.

Last but not least, your Instant Pot might be suffering from an internal electrical issue. This is probably the case if you’ve done everything on the list, and everything else is fine.

In this case, it’s best not to tinker with the appliance all by yourself. If you can’t find relevant troubleshooting information in the guide, it’s best to contact the company for a warranty claim.

When your Instant Pot is not turning on even if it’s plugged in, it can be frustrating to solve when you don’t know what to look for or where.

This guide will help you ease the frustration as much as possible and get you back to enjoying those favorite recipes sooner rather than later.

The Instant Pot is a sturdy device that is made to last for a long time. However, in case of an electrical surge, there is a risk that the internal circuitry might get fried.

If that happens, your only option will be to replace the appliance. You can talk to the support staff and find out what they have to say regarding the replacement. 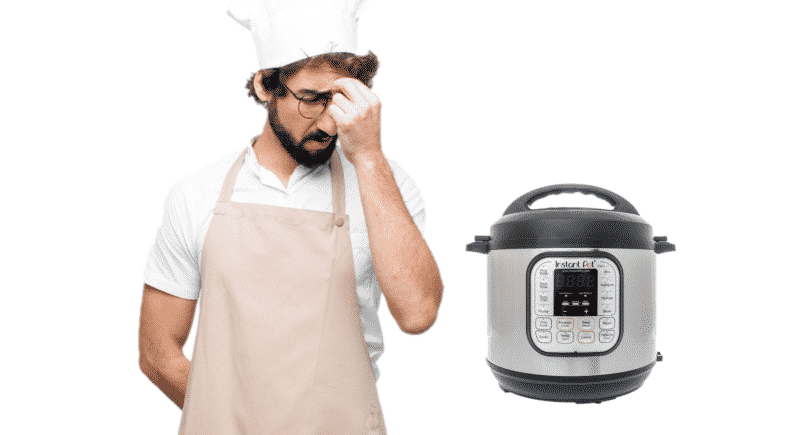