It is great to know many people own pressure cookers and are interested in finding more ways to use the cookers when making meals. Thankfully, there are so many recipes that can be cooked using pressure pots. However, if you find a recipe that does not involve the use of a pressure cooker, there are steps you can take to achieve the same outcome with a pressure cooker.

How To Convert Recipes To A Pressure Cooker

In this post, my focus will be on describing the different ways you can adapt other recipes and achieve great results using a pressure cooker.

The quick cooking properties of the pressure cooker make them convenient. You can get home later than usual and still prepare your meals before the expected time. Pressure cookers reduce cooking times considerably, and it can be used to cook foods in different ways. It is such a relief that many foods can be cooked quickly using pressure cookers. However, some people experience limitations regarding particular recipes that have not yet been adapted to the pressure cooking system.

It is important to understand how the pressure cooker works before attempting to adopt a recipe for it. There are some ‘rules’ however informal, and the issue of overcooking foods can be managed by using standard time charts that display cooking times for different meals. Overall, learning how to prepare more meals with the pressure cooker will save you much stress with the added advantage of convenience since your meals will be ready quickly.

The main issues people who need to use pressure cookers for certain meals encounter are scorching and the foam that generates during cooking. Thankfully, there are tips to avoid these issues when using a pressure cooker.

It should be noted that you may need to perform different trials before getting it right. If you are lucky, someone out there has already done it and published their methods, which is great. If you can find such information online, then it is up to you to start trying. Don’t be put off by errors; you are learning how to do it better from the mistakes.

It is also essential to follow the guidelines in the recipe you have chosen to cook. This means using the right measurements and cooking liquids. In this regard, you will be expected to consider the following; accurate measurements for all ingredients, preparatory techniques, cooking time, and all other information stated in the recipe. Another crucial aspect of this process is learning how to use the pressure release mechanism effectively. Applying the pressure release mechanism at the right time is crucial to avoiding overcooking meals.

If you notice that the recipe you have chosen to adapt to pressure cooking requires much water, it will be necessary to reduce the quantity because pressure cooking is faster and there is no room for evaporation, which happens when you use regular pots. Pressure cookers have a marking that indicates the recommended level of water when you cook. This mark should be used as a guide to add water to your recipe before pressure cooking.

When adapting traditional recipes to pressure cooking, it is also important to gauge the right solid to liquid ratio as specified in the recipe.

Another thing to do is getting a list of the cooking accessories you will need for the recipe. It may be necessary to prepare food items before they are placed in the pressure cooker.

From your research, it is possible to find many similar recipes online. Don’t be alarmed; this is a normal situation because there are others who have tried and used different methods in an attempt to get better results. If you are not interested in experimenting, stick to the recipe that has more similarities with your traditional recipe.

Common issues and solutions when releasing pressure from the cooker

Excess Water in the Pot

If you mistakenly put in more water than necessary when using a pressure cooker, you may find out that your food is too watery after releasing the pressure and opening the lid. The solution to this problem is cooking for additional time without the lid. The reason for removing the lid is to allow evaporation which will eliminate the excess liquid. Alternatively, if you can use the extra liquid to improve soups or stews because of its flavor, extract and save in a refrigerator until it is needed.

The quantity of herbs and spices you will need to add to a pressure cooking recipe should be smaller than the conventional recipe requirements. The reason for reducing the spices used is that your food will be cooked quicker under pressure; hence the herbs will retain a stronger flavor. From this perspective, many people avoid the use of salt or add very little quantity when pressure cooking.

Some foods such as vegetables can be overcooked under pressure. The outcome may not be suitable for your meal because of the inconsistent texture or overcooked vegetables. If this happens, don’t discard the overcooked vegetables; instead, you can make gravy for stews and soups. Gravy can be preserved in a refrigerator, so you don’t have to go out of your way to make stews if it is not in your plan.

After removing the lid if you discover your food has not cooked properly, you can continue cooking to achieve what you need. This time cook for about five minutes. Release pressure using the natural release technique. I am sure your food will be ready when the lid is taken off. Some recipes also feature tips for extra cooking time if the food has different varieties known to be tough.

What can be done if the liquid content is insufficient?

Pressure cooking without enough liquids mostly leads to scorching. You can tell if this has happened by the smell of burning food. To prevent the situation from getting worse, you should stop cooking and lower the pressure with the cold water release technique. If you have acted quickly, you will notice only the food at the bottom of the pot has been affected, leaving much of your food fit for consumption. Overall, this situation can be avoided by ensuring sufficient water or liquids have been added to your food before pressure cooking.

What should be done to prevent scorching?

It has been discovered that the order in which you put food into the pressure cooker can help prevent scorching. For example, if you are cooking foods rich in sugar or starch, tomato sauces and a mixture of liquids, to prevent scorching first put in the tomato sauce, and liquids before the starchy or high sugar foods. On direct contact with the bottom of a pressure cooker, foods rich in starch and sugar will burn. However, putting your liquids or paste first provides a layer between the hot base and foods that can burn while pressure cooking.

Our busy lifestyle has made it difficult to cope with the slow cookers. This is why more people are buying pressure cookers and searching for ways to cook traditional recipes faster. It is true that some foods are recommended to be cooked slowly. Tough meats can reach a satisfying level of tenderness when you have the patience to cook the meat slowly. However, time is not a luxury for many people and thankfully similar results can be achieved faster with pressure cookers.

If you wish to convert any of your favorite slow cooking meals for the pressure cooker, first perform a search online to know if a pressure cooking recipe already exists for the meal. If it does exist, study the recipe with particular focus on cooking time, and the liquids to be used in the recipe.

For quick meals that have been frozen, you don’t need to wait for many hours to thaw your food. Under the steam pressure in these cookers, you can defrost quickly and start cooking.

Many people prefer their soups and stews thick. It would have been easy to achieve the desired thickness if you are slow cooking, but there is a way to thicken your food if you use a pressure cooker. Adding known thickeners such as corn-starch or flour can cause scorching when you use a pressure cooker. To avoid scorching, you should add thickeners after pressure cooking and removing the lid. This way, you can achieve the consistency and texture similar to regular cooking methods.

Volume Capacity of a Pressure Cooker

These recommendations should not hinder your ability to adapt slow cooking recipes for the pressure cooker. This is because the half the volume of the pressure cooker is as large as an average pot. So you can still cook enough food for your family. 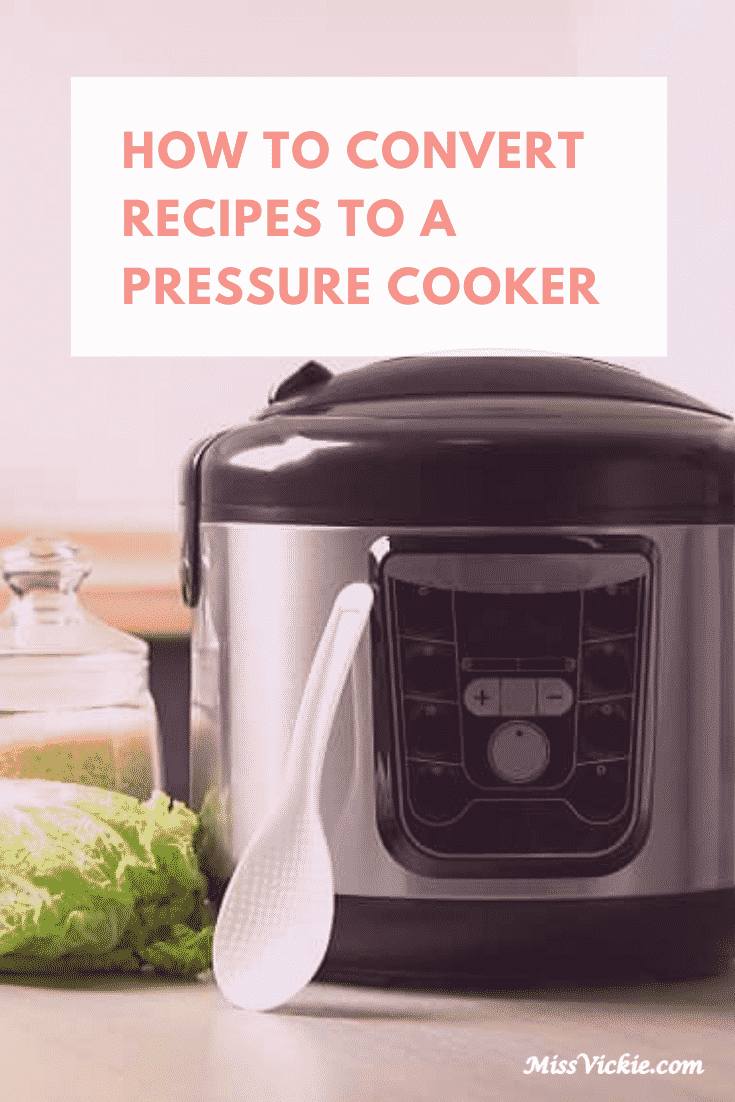