Cooking with some form of liquid is the most fundamental aspect of preparing food with a pressure cooker. Most pressure cookers work by building steam inside the sealed pressure pot.

Therefore, when pressure cooking, you must always use water or some form of cooking liquid.

You may or may not know that the amount of water you use in your pressure cooker matters and can make a world of difference to your cooking results.

Putting too much water in your pressure cooker can dilute your food. It will be overcooked and tasteless with too much residual liquid.

Remember, there’s very little evaporation from a pressure cooker when compared to an open pot on the stovetop.

Adding excess amounts of water can also cause the pressure in your pot to build to dangerous levels.

As a rule of thumb, when using your pressure cooker, you should never allow the total amount of cooking liquid inside the cooker to go beyond the two-thirds full line.

The cooker needs open space for the steam so that it can create pressure.

The minimum liquid required for pressure cooking refers to the least amount of liquid or water needed for your pressure cooker to create enough steam.

This will allow it to build and maintain enough pressure for cooking your dishes.

When using a pressure-cooking recipe, always ensure that your recipe calls for the minimum amount of cooking liquid required by your pressure cooker for it to work properly.

Why do pressure cookers need water?

Pressure cookers work by keeping steam enclosed in a contained space, which then raises the temperature of the liquid in the cooker to above the boiling point.

If there is no presence of steam, a pressure cooker will not work appropriately.

How Much Water Is Needed For Pressure Cooking?

When using your pressure cooker, you should always make sure to add at least 1 cup of water or any other cooking liquid such as stock or wine. Otherwise, your cooker will not be able to get up to the required temperature.

Most recipes that call for pressure cooking will require you to use at least one cup of cooking liquid unless the recipe specifies otherwise.

Depending on the pressure cooker size and version

For example, you will always use a smaller volume of water in a 2-quart pressure cooker than you would add to a 10-quart one.

Second-generation pressure cookers typically recommend using at least half a cup of liquid, while weighted cookers require at least one cup of water for every 20 minutes of cooking.

This is because more steam is lost through the valve in the older type cookers.

Keep away those thickening agents.

Don’t add thickening ingredients like cornflour, gravy powder, or flour to the liquid at the beginning of cooking. These will thicken the liquid prematurely.

A thickened liquid releases less steam, so your pressure cooker will struggle to get up to pressure. Mix the thickener with a small amount of water and add it right at the end of the cooking time.

Be cautious with foods that expand.

If you are cooking foods that expand easily by absorbing a lot of water, such as rice, dried vegetables, and beans, you have to exercise a lot of caution.

Never fill the cooker more than halfway. This will allow for expansion.

Remember to soak dried beans for a least 4 hours before cooking, or preferably overnight. If you do this, they will cook in under 15 minutes. You can also soak brown rice for faster cooking.

When pressure cooking dried foods like beans, barley, rice, or lentils, use 3 cups of water for every cup of dried food.

Bonus tip: Never add acidic ingredients like tomatoes when cooking dried beans because otherwise, they will take a very long time to cook. Rather add these ingredients once the beans have softened.

Aside from using water for pressure cooking, you can also use a cooking technique known as infusion cooking.

Infusion cooking works by covering food in a well-seasoned and flavor-enhancing liquid such as a broth or stock. This technique also uses almost any liquid or a combination of liquids.

Even when using the infusion cooking technique, you must always remember to add sufficient amounts of liquid to the cooker that will last throughout the cooking period. 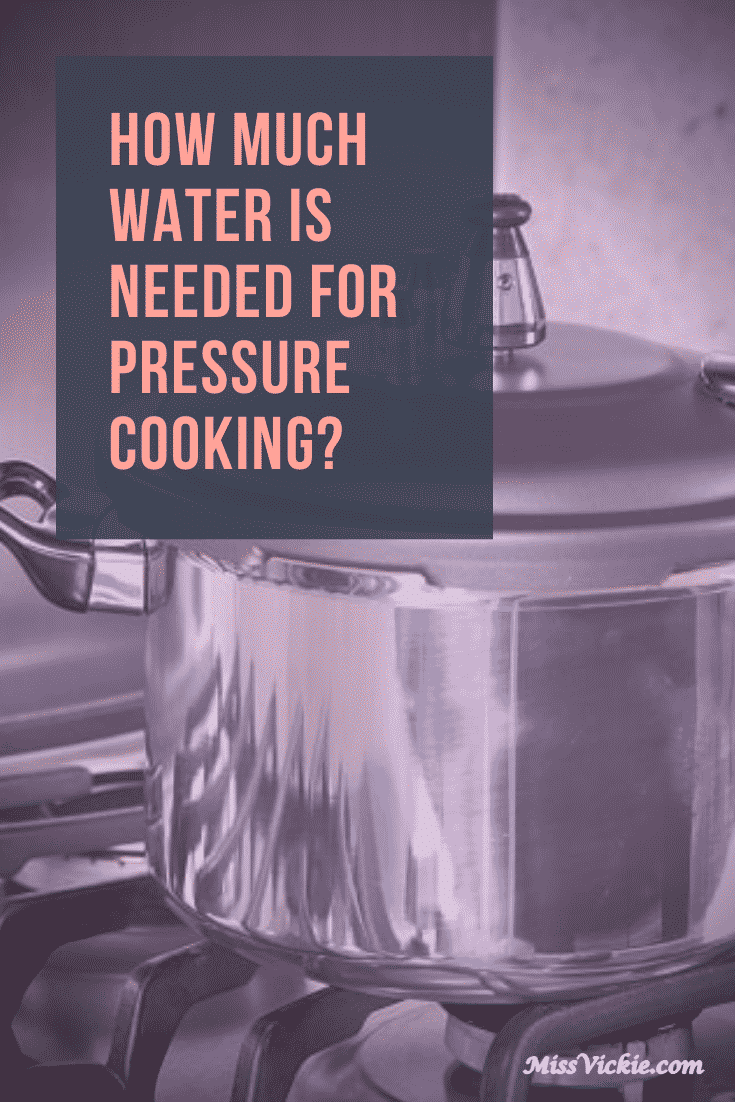 1 thought on “How Much Water Is Needed For Pressure Cooking? (Answered)”