In this day and age, we want everything to be fast and efficient. Also how we went from cooking on bonfires to multi-cookers is a testament to that. Thus we have the Instant Pot, a product of the modern era’s technological advancement. Now not only can you cook a large number of complex dishes using this single cooking equipment. But you can also have that food ready and on the table within a few minutes.

Unfortunately, it’s science, not magic. So although it can cook many things, the technology still isn’t advanced enough to give it infinite versatility. We still need other cooking equipment to fill this void and Instant Pot showcases quite a few of them. For example, you can’t air fry in a standard Instant Pot but you can buy an Air Fryer lid for that Instant Pot allowing you to cook a batch of crisp delicious fries with it. Thus without these external sources, a standard Instant pot is utterly incapable of cooking certain dishes. Also if you persist in cooking such dishes using a standard Instant Pot you will not only be risking your ingredients you might also risk damaging the machine and even your well-being as well as your kitchen might come in harm’s way

Below we have listed seven foods that you should avoid making in a standard Instant Pot.

What You Cannot Cook In Instant Pot?

It’s impossible to open a bakery by relying on just a single instant pot. But if only steamed buns are on the menu, then you might consider doing it. A loaf of bread with a crusty exterior and a soft fluffy interior is not something your Instant Pot was designed to make. So why does it fail to make a decently appetizing sourdough? The answer lies in the chemical processes that occur when baking a loaf of bread.

For the dough to cook into a loaf of bread, a very important process has to take place called the Oven Spring. This phenomenon occurs when you heat the dough causing its gas cells to expand, thus allowing you to observe the dough’s rising. The gas itself is water and alcohol which turns into vapor due to the heat applied. This gas then goes on to merge with the gluten network causing the dough to expand by almost half its previous size. It’s an extremely essential process that cannot happen when making bread Inside an Instant Pot. That’s because the Instant Pot works as a pressure cooker. Where steam and pressure do all the cooking.

What makes a good burger? A balanced seventy to thirty meat to fat ratio burger patty. You can slap it on a grill for a good char or cook it on a frying pan giving it a dark brown caramelized crust. Both of them will make a killer burger. So what’s the common ground here? It’s the caramelization that occurs when fat molecules melt due to the heat and start a process that gives your burger patty a hardy crust.

For the above process to occur you cannot have steam. Steam stifles the cooking atmosphere making your patty soft and disgustingly soggy. A similar steamy atmosphere is present inside an Instant Pot. Cooking a patty inside such an environment will not make you a burger it will make you a meat stew instead.

Now you might be wondering didn’t Instant Pot advertise yogurt making as one of the key features? So why are we advising you against making it? Well, you can make it but it’s not instant. Making yogurt in an Instant Pot unlike its other features takes approximately 8 hours to make not including the time it takes to refrigerate. Also, it’s only possible through the dedicated setting that’s given to you on the front panel. Using the pressure cooker will only provide you with unappetizing curds.

In conclusion, it’s better to just buy your yogurt. As even though it’s called the Instant Pot, but unfortunately it doesn’t make instant yogurt.

You can make a dairy product i.e. Yogurt. But you should never attempt to cook one inside a closed-off pressurized Instant Pot. Because pressure cooking your dairy product will make curds ruining your Mac and cheese and other similar dishes. If you are attempting any recipe with a cheese sauce e.g. Chicken Alfredo Pasta. Make sure to add your dairy products after everything else is cooked.

A crisp brown crust on the outside, when peeled off reveals a mouthwatering sight of juicy tender white meat. Who wouldn’t crave a good fried chicken? To make a fried chicken crisp and tender you need a perfect amount of batter to cover your chicken keeping its juices from frying off. Also, no external moisture should seep into your chicken for that you need to fry it at high stable temperatures.

All of these conditions can be achieved in an open pot or a deep fryer. But the Instant Pot with its pressure cooking introduces large amounts of moisture that will end up cooking your chicken into a soggy mess.

Moisture and high pressure will obliterate any hope you have of eating a pan-seared steak. Have you ever tried boiling your steak? Well, it’s quite similar. Just a bit worse. Whether it’s pan-searing then boiling or boiling then pan-searing the final product will always be a bland soggy slab of meat.

It’s called an Instant Pot because having this equipment in your kitchen speeds up the cooking process. But it has a huge drawback. Foods that are designed to be cooked instantly are pretty much overcooked or ruined if kept inside an Instant Pot. The reason for this is simple. Instant Pot builds up pressure to cook foods that take a long time and make them ready for plating in a short period. The pressure it builds up needs to be released over a five to ten minute period. So when you try to cook Instant ramen through an Instant Pot. It will make an inedible mess out of it. 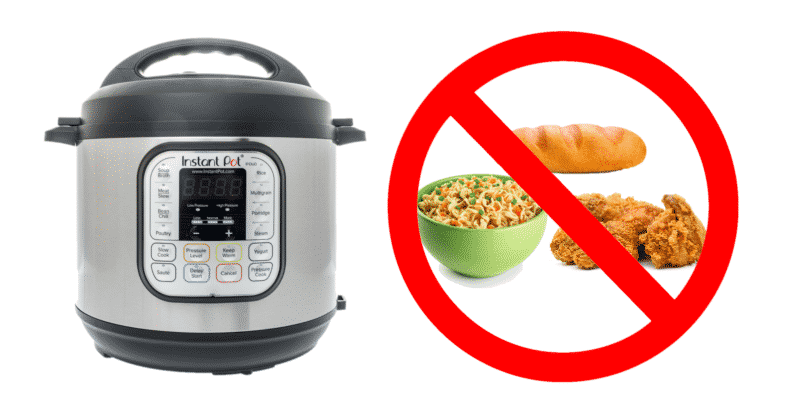