Potatoes are a great source of carbohydrates, fibers, potassium, protein, and various other minerals. You use this versatile item in several ways like in French fries, potato soup, potato salad, potato dumplings, etc. A medium baked potato contains almost 36 grams of carbohydrate. The potato soup is full of energy and healthy ingredients. The problem with a soup containing potato as an essential ingredient is that such a soup will have a high carbohydrate content.

What to do if you want to limit your carbohydrate intake via such soup? An easy method to solve this problem is to substitute something in recipes as an alternative for potatoes. There are no substitutes that contain zero percentage of carbohydrates.

But still, you can replace it with other alternatives vegetables that have less percentage of carbohydrate content. Several vegetable options are available to lower your carbohydrate intake. Therefore, you can use them as a substitute for potatoes in a soup.

Substitutes For Potato In Soup

Turnips are a great choice to replace potatoes in a soup. You can use turnip in the making of stews, potato soups, or any other sauce to replace potatoes quickly. The use of as a substitute for potato in soup will give almost the same thickness to the dish. Mashed turnips should be used to make soup.

The benefit of using turnip is that it retains its shape and form even after the preparation of the recipe. Another important thing is that both are root vegetables and hence turnip is a good choice to replace potatoes to have a good natural taste of the soup.

Cauliflower is another best substitute to replace potatoes in a recipe. It makes a delicious substitute for the mashed potato soup recipe. This vegetable has a very low content of carbohydrates. A half-cup serving of cauliflower contains almost 3 grams of carbohydrate in it.

Cauliflower has low fat, sodium, fiber, and minerals. Cauliflowers have fewer calories in comparison to potatoes. Hence, the addition of cauliflower in potato soups will reduce the calories by three quarters.

It can be used as a replacement for potatoes as both are white. It looks the same as potato, so it can be used without altering the color of the recipe. Additionally, the carbohydrate content of this vegetable is also lesser than potatoes.

It is a globe-shaped root vegetable belonging to the potato family. Jicama has a white crunchy flesh with a sweet and nutty flavor. It has a mild flavor naturally due to which Jicama makes a great substitute for potatoes in soup. A half-cup of Jicama contains 6 grams of carbohydrate and 25 calories.

If you haven’t tried Jicama in your recipes, then I suggest you try this as an alternative because it will reduce the intake of carbohydrate

Rutabaga is a root vegetable having brownish white color belonging to cruciferous vegetables. You can substitute potatoes with Rutabaga in recipes. Rutabaga is useful because of its lower carbohydrate content. This characteristic makes it an attractive option for a low carbohydrate substitute in the making of potato soup.

Just like potatoes, rutabaga can be used in soups or stews either baked or boiled form. It has a delicious taste and contains only 6 grams of carbohydrate in a half-cup serving. The color of Rutabaga is not similar to potatoes as they are slightly yellowish, and its color turns light orange in cooked form.

Try adding any of the above substitutes for your soups that require potato as an essential ingredient. Enjoy soups with these vegetables and give your mouth a slightly different taste by using these best alternatives. However, an important thing to note is the veggie hater will not like any other vegetable as a potato substitute. Since potatoes are flavorless so they are generally acceptable by ones who do not like vegetables. 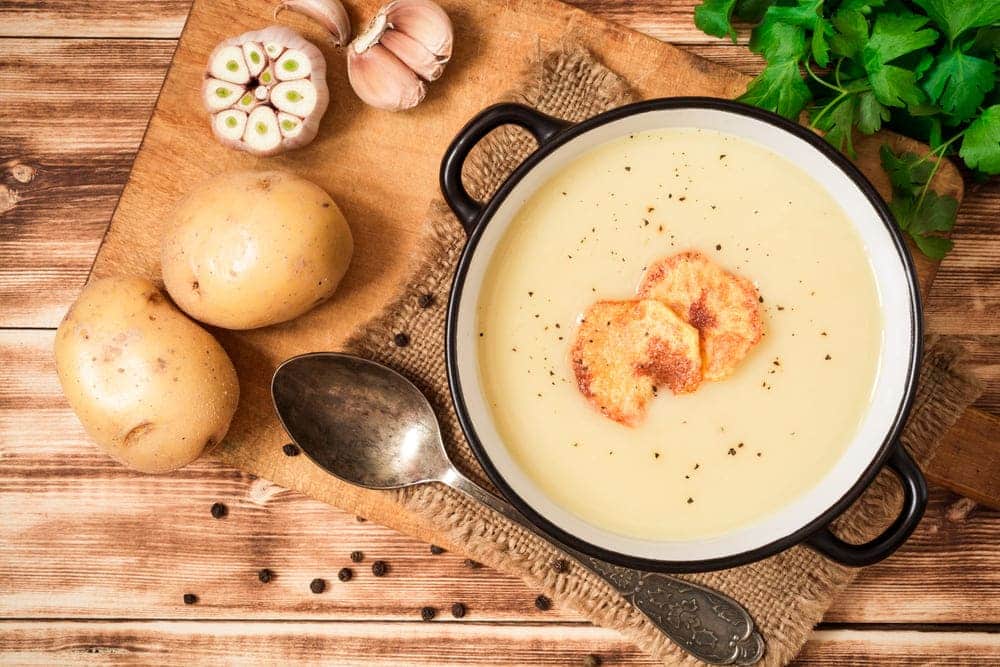