Potatoes are everywhere and it’s safe to say that it’s everyone’s favorite root. Ranging from French fries to soups and salads, there are hundreds of recipes that depend on potatoes. However, when it comes down to steaks’ sides and filling, potato puree vs. mashed potatoes is a common comparison.

Generally, these two forms of potatoes are widely confused with each other but there are some differences. With this article, we are sharing the differences between mashed potatoes and potato puree!

Potato puree is officially known as pomme puree which is a form of mashed potatoes with a smoother texture as compared to our regular mashed potatoes. Potato puree is actually a recipe of a French chef, Joel Robuchon who made this recipe in 1989. Even more, this potato puree recipe even won him the Michelin stars and still remain on his restaurants’ menu.

Some people pass these boiled potatoes from the potato ricer and then add milk, so it depends on the recipe that you are using. As far as butter is concerned, it is added slowly to the potato and milk mixture. In addition, butter and milk are added to achieve desired consistency. The secret about achieving a perfectly smooth consistency is continuous stirring.

When it comes down to potato puree, some people even pass it through the sieve for ensuring higher smoothness. The users can use the sieve as many times as they want until they achieve the desired smoothness in the texture. However, it is obvious that more straining or sieving will increase the smoothness of potato puree.

As for the taste, the taste of potato puree can be enhanced by using black pepper and salt. Generally, potato puree is served hot but if you don’t have to use it right away, it’s best to keep it on the double boiler (over the simmering water, in particular). Also, while you are trying to store the puree, you have to whisk the puree continuously to ensure smoothness.

Even more, when you have to serve potato puree after some time, we suggest that you add more milk and butter to deliver a smooth and silky consistency. All in all, it can be served as a dip or as a side for its light and silky texture. Also, it’s completely lump-free.

For the most part, butter and cream are added to make mashed potatoes. The mashed potatoes can be flavored by adding pepper and salt. However, some people use other ingredients, such as spices, parsley, garlic, chives, crisp onion, mustard, and sour cream. The most intriguing spice used in mashed potatoes is nutmeg.

In the case of French mashed potatoes, egg yolks are added. As far as butter is concerned, it is used in less quantity. In addition to cream, some people use broth and stock to make the low-calorie option. In Indian cuisine, mashed potatoes are mixed with chili pepper, chopped onions, coriander, mustard, and other spices and are known as Aloo Bharta. 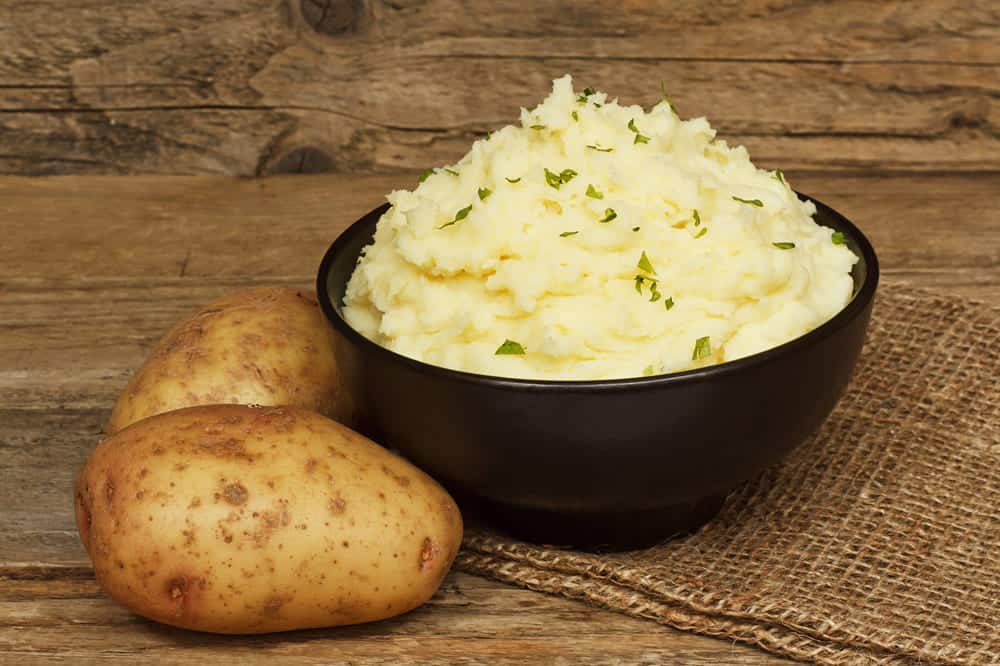