If you have been using your pressure cooker for a while now, then you must have come across some recipes that call for pan in pot cooking. Though it might sound complicated, the concept of pot in pan cooking is actually quite simple. Put plainly, pan in pot cooking, which is also commonly referred to as PIP, essentially involves placing another smaller oven-safe pot or dish into the main pot of your pressure cooker.

Benefits of using the pan in pot cooking techniques and recipes

There are many reasons why you might want to use the PIP cooking method that includes:

The PIP cooking technique is ideal for using when you want to cook food simultaneously and quickly. With PIP it is entirely possible to cook an entrée and a side in the same pot at the same time. For instance, you can cook a chicken dish in the main pot as your rice cooks in the smaller bowl placed on top of the trivet.

You can cook multiple dishes together

PIP is ideal for slower cooking

Home cooks often turn to pan in pot cooking when they need to prepare delicate items that need to be slow cooked without overcooking them. As such, delicate items such as broccoli, greens, certain types of fish and seafood like shrimp would fair well with PIP cooking.

Foods that need to be cooked in a water bath or in a Bain Marie environment such as eggs, steamed puddings, custards, flan, and cheesecakes are often prepared using the PIP cooking method. This method slows down the cooking process by using steam to cook the dish evenly.

If there are any baked items that should have a soft and moist consistency, PIP would be a great method to utilize. Baked items such as apple cakes, lava cakes, crustless pies, and muffins are, therefore, easier using this technique. If there is a baked item that has to be browned before serving, it can easily be finished in your oven without losing all the moisture.

If you are preparing food for individuals that have special dietary requirements, you can prepare separate dishes for everyone without having to worry about doing it in separate cooking containers.

For reheating your food

With the PIP cooking method, you can reheat your food easily at the same time without losing any moisture in your food.

Use for foods that stick

Foods that stick easily to the side of your pressure cookers such as lasagne or anything containing cheese or sugar can be cooked efficiently using the PIP cooking method.

What to remember when using the pan in pot cooking method

What goes in the top and bottom pan matters

Check when food is done

When you get to the end of the cooking process and a dish is not done well enough, simply place it back into the pressure cooker so that it can continue to cook until done. Simply manually quick release the steam to check for doneness and replace the item that needs to cook a little further.

When cooking 2 dishes that have completely 2 different cooking times, you can try precooking the dish that requires the longest cooking time first. Do a quick release of the pressure before placing your second food item on top of the one that has already precooked and secures the lid to continue cooking. If you can, try wrapping the second dish in a double layer of aluminum to insulate it against the heat and to ensure that it cooks slowly and evenly.

Items and accessories needed for pan in pot cooking

To use the pan in pot cooking method, there are a few accessories that you should have such as: 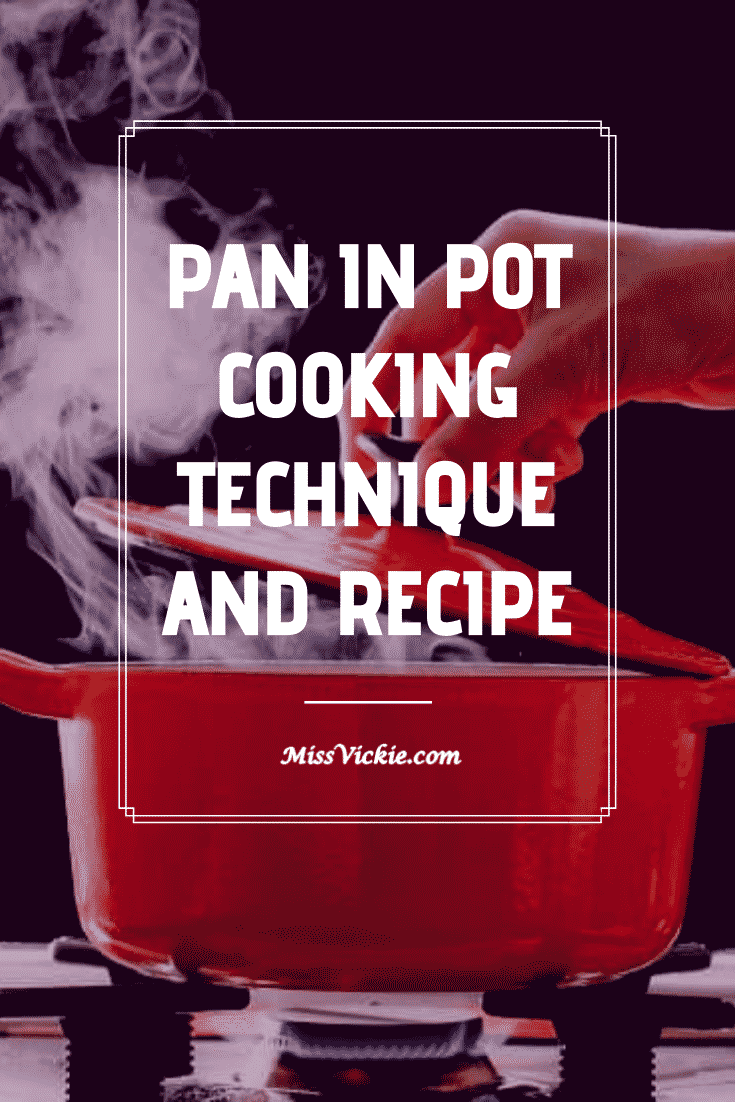