Pressure cookers are some of the best modern tools for a modern kitchen to have. Chances are that if you own one, one of the things that you love the most about your pressure cooker is how quick and efficient it is. Plus, if you see cooking as a chore, a pressure cooker can help you prepare meals, even those containing a mixture of ingredients, fast and evenly.

When you have different ingredients to incorporate in one meal, you only need to add the ingredients at the right time and in the right amounts and leave it to your handy pressure cooker to do the rest. Aside from giving you an edge time-wise, pressure cookers also allow you to churn out delicious meals that have a high nutritional value, which is something that is often difficult to achieve with other traditional cooking methods.

A lot of inexperienced pressure cooker novices are only aware of one technique of using a pressure cooker. Typically, this method involves filling the pressure cooker with water 2/3rds of the way up before throwing in the different ingredients into the cooking liquid. After this, the only thing to do is wait for the cook to food past the recommended cooking times. Although this method works for most cooks, there are other several methods that can be utilized to make pressure cooking both fun and rewarding.

When phase cooking using your pressure cooker, you want to interrupt the cooking process by using a release method that will help you to drop the pressure so that you can add your array of ingredients according to the times that they require to cook fully. You can use your preferred release method more than once in one session especially when dealing with ingredients such as tender meats and veggies. But it is very important that you use the right method if you are to avoid ending up with rock hard ingredients or limp vegetables. The most common release methods for phased cooking include:

The quick release method is also commonly sometimes referred to as the normal release method. When pressure is released all at once from the cooker through the release valve, you are said to be using the quick release method. The release button on your pressure cooker opens when the knob is turned to release pressure quickly. This process can take up to 4 minutes, which is great when you need to add your ingredients or check on the status of the food to see whether it is done.

The quick release method is great for using when dealing with vegetables and any other quick-cooking foods as well as meat stews. However, it should be avoided when dealing with some types of legumes, rice, and recipes that consist of fruits. If you are using a weighted or jiggly pressure cooker, it may not have valves that will allow you to use this method so you might have to rely on another technique to add your ingredients.

The natural pressure release method takes the longest time to accomplish usefully. This method can take anywhere from 10 to 30 minutes depending on the brand of pressure cooker that is in use. The natural pressure release method allows pressure to be released slowly one the cooker has been turned off. It is often used when preparing foods that foam up or expand when cooked such as legumes, grains and certain types of fruits. It also works well when preparing foods that need to be cooked over time such as braided and steamed meats or desserts.

Use the recipe above with any flavorful, but cheap cut of meat like round steak or chuck. These tough cuts will be great for the pressure cooker, and using the Cooking Time Charts you’ll see that stew meat needs to cook about 15 – 20 minutes, but the vegetables need much less. If we add the potatoes and carrots at the same time as the meat they will be mushy baby food by the time the meat is done. This is why we use the phased cooking method.

So lets brown add the meat first in a little hot oil, add the seasonings to develop the flavor for the rich broth, and partially cook the meat. Then interrupt the cooking before the meat is done to go the next phase and add the vegetables. Then return to pressure so that everything will be done correctly. With some recipes you may interrupt the cooking several times to add and/or remove ingredients.

Use the quick release button as the preferred method to interrupt the cooking because is doesn’t cool the pot and you can return the cooker to pressure quickly after other ingredients have been added. Don’t worry, if your cooker doesn’t have this feature, the phased cooking method will work with the cold water release method too, it will just take a bit longer to come back to pressure. 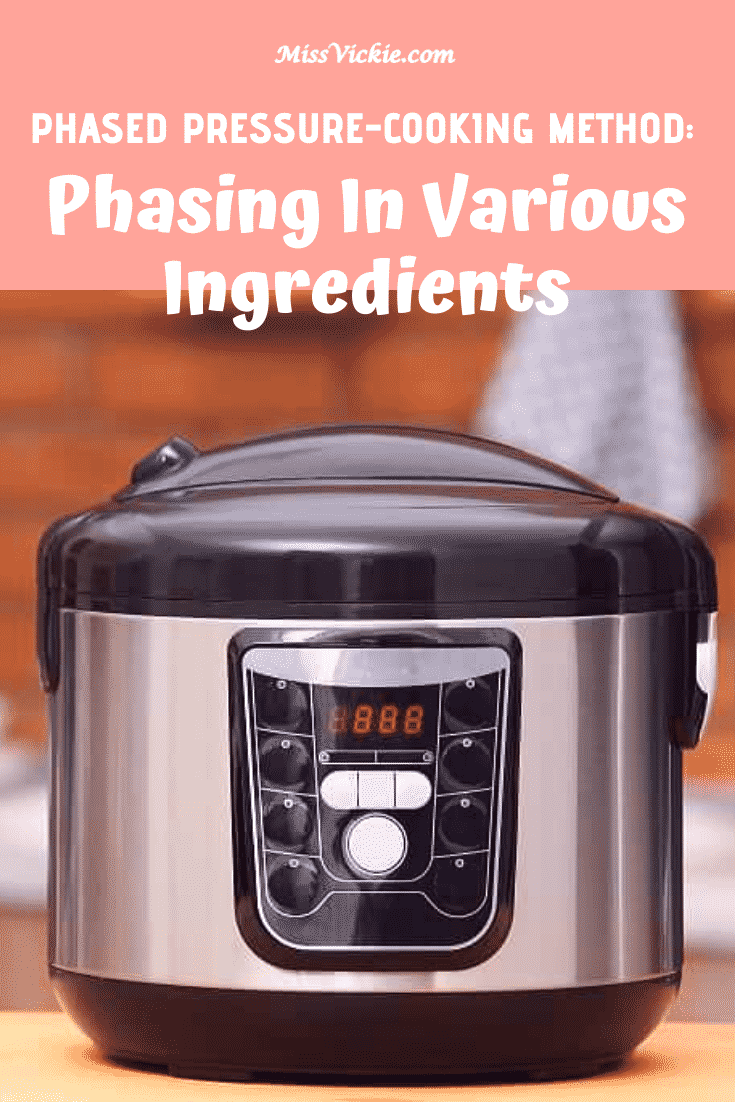