Are you a meat lover who can’t get enough of beef? Beef is a commonly consumed meat worldwide. This is not only because of the high nutritional content but also the flavor.

Beef is a versatile ingredient that has become an overpoweringly popular staple in every kitchen except that of vegans. Be it beef broth or roasted or grilled beef, it is hard not to fall for deliciously cooked meat.

If you’re the one who typically heads out to do shopping, then you’ve likely faced various different terminologies when browsing through the beef fridge. If you’ve ever wondered the exact difference between flank steak vs. top round, read on.

We’ve got everything you need to know about both meat cuts coming up.

Flank Steak Vs. Top Round Comparison

Flank Steak Vs. Top Round

After reading through our comprehensive breakdown of flank steak vs. top round, you’ll never be confused between these two tasty cuts again.

Flank steak is one of the most unique steaks with amazing flavor beyond comparison in its price range. The meat of this steak is a little bit chewier compared to other steaks. Let’s settle the confusion right here, and now, flank steak is not a steak. 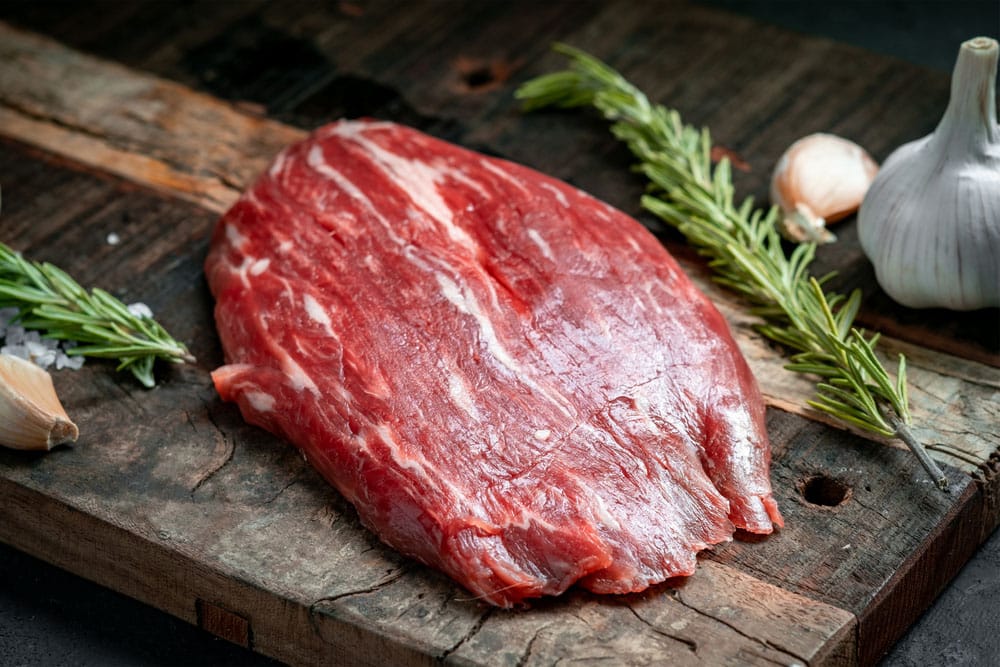 It is just a cut from the abdominal muscles of a cow. Here’s a complete look at this versatile cut of beef.

Flank steak is also sold as London broil and skirt steak. You’ll also find flank steak sold as Bavette which is the French culinary term for this cut of meat extracted from the stomach muscles of the cow. 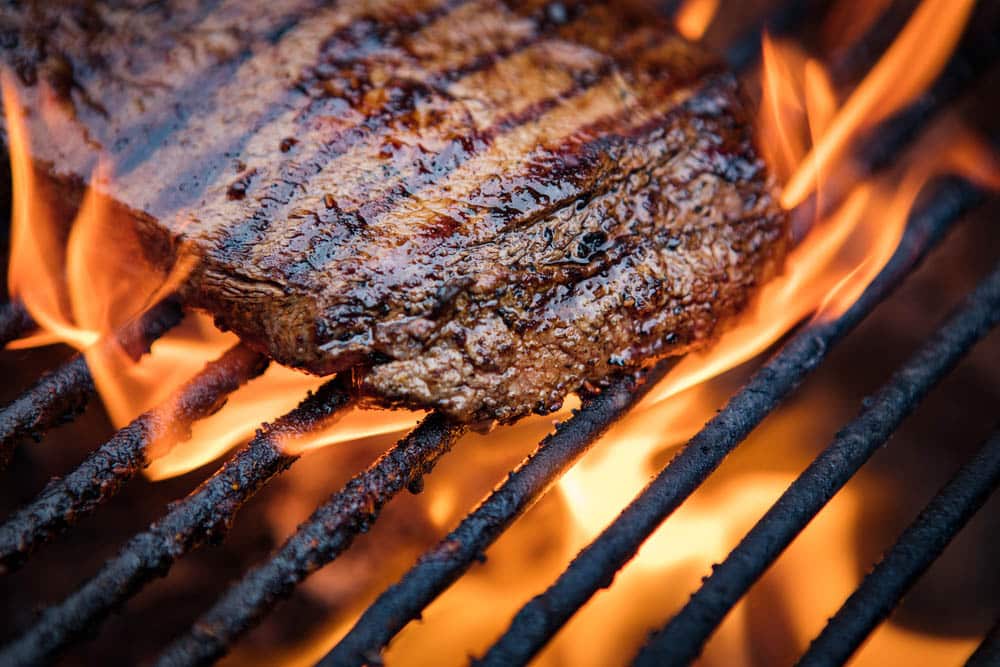 Flank steak is a tough cut, and it takes cooking expertise to cook it to perfection. The low-fat content means that you do not need to spend time trimming. It also means that flank steak cooks extremely quickly.

We recommend tenderizing using a mallet or cooking the flank slowly. Marinating helps bring out softness and elevates the taste. Try out a basic marinade of soy sauce, garlic, and something sweet like honey. You can extract the richest flavor by marinating it. 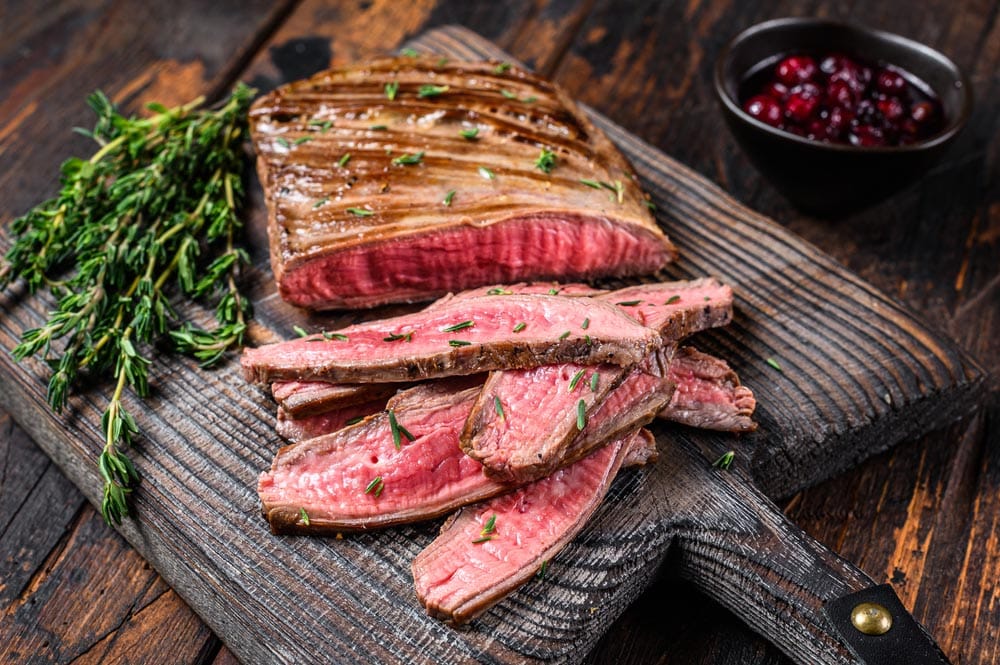 Be sure to try out other marinades too.

Flank steak is a cut of meat that’s taken from the abdominal muscles of cattle, extracted from a region directly behind their chest. This makes flank steak technically not a steak at all but instead a cut of meat with texture and flavor resembling a conventional steak.

Most butchers cut the flank steak against the grain in order to make the steak more tender.

Despite being more sinuous than a conventional cut of steak, flank steak is rich in meatiness. Like a piece of meat that’s taken from the hard-working muscles of a cow, flank steak is chewier than other varieties but has more inherent flavor. 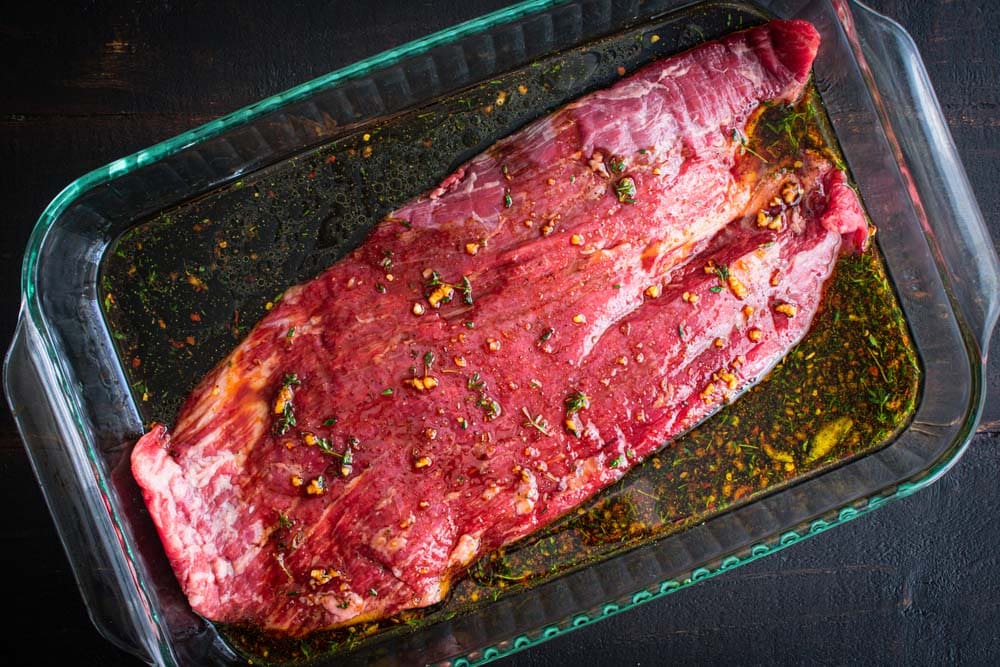 Although flank steak can be prepared in any manner desired, it is most often braised to improve the tenderness.

If flank steak is overcooked, it quickly becomes tough, dry, and chewy. Let the steak rest for a little while before serving to get the best texture. Make sure to slice against the grain to prevent a chewy steak.

Asian cuisine often favors flank steak for use in stir-fries. The quick-cooking medium-rare steak is also popular in French recipes, and it’s the go-to meat for fajitas and other meals where thin slivers of meat are quickly cooked. 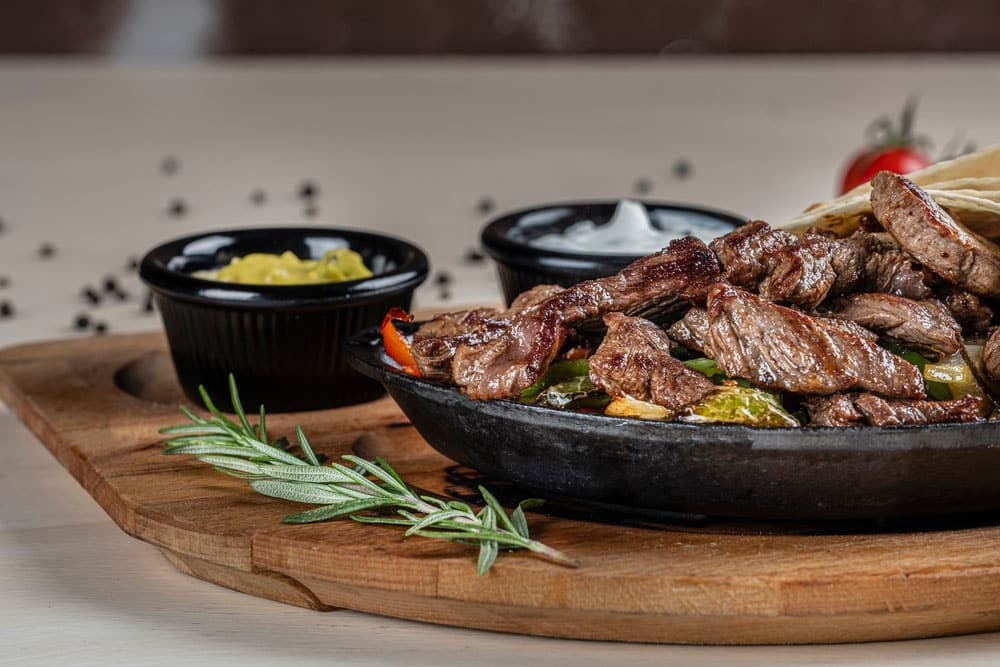 It is famous for fajitas and is especially preferred for stuffing, rolling, and tying recipes such as pinwheel and braciola.

Flank steak is a highly affordable cut of meat and retails for an average of between $10 and $12 in the US.

You can freeze flank steak for a year or refrigerate it when cooked for four days. 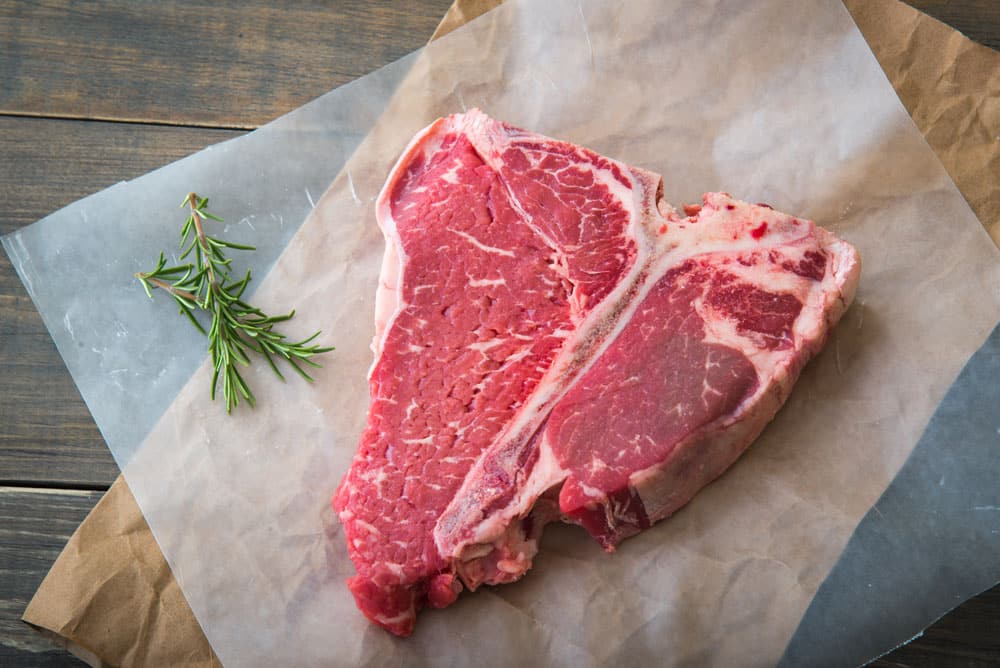 The best substitutes for flank steak (in order of similarity) are top round, chuck, inside round, and porterhouse. 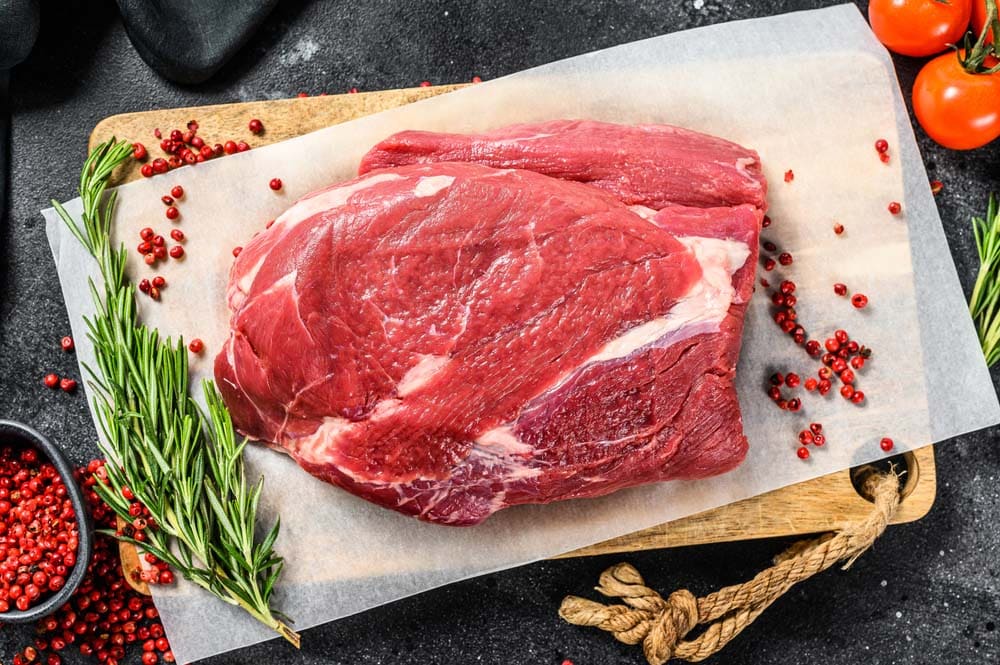 This beef cut, unlike the flank steak, comes from the leg muscles.

There are many names for the economical cut referred to as top round. Look for London Broil, top blade steak or top round London Broil 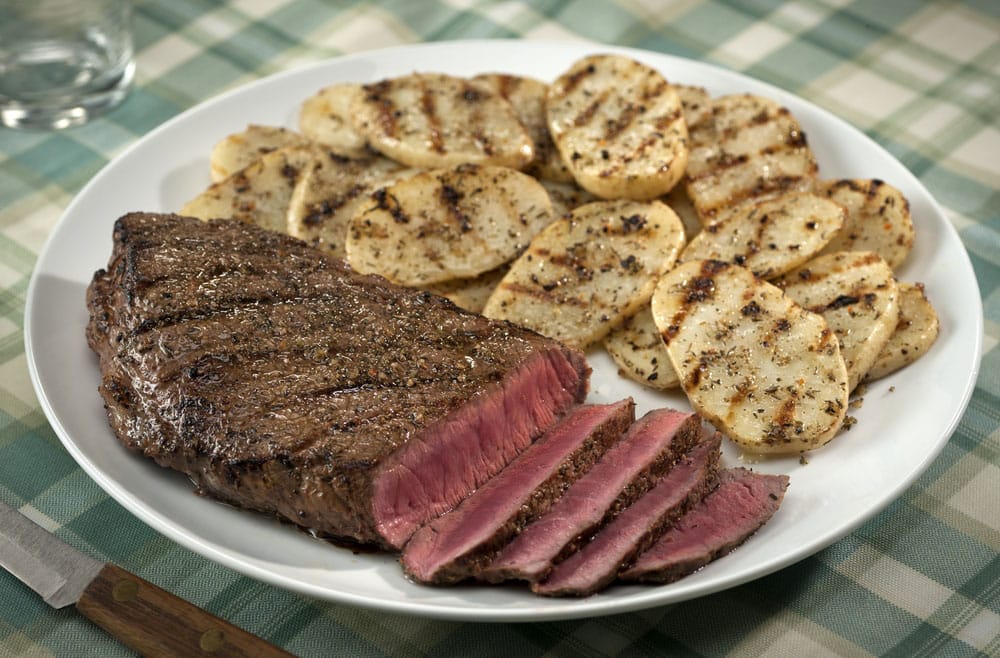 Expect tenderness that’s softer and juicier without prolonged cooking than bottom round. There’s barely any marbling present on top round and very little fat, which is why it is typically roasted.

The top round is a cut of meat that’s extracted from a section of the back of a cow’s leg called the “round”. The cut can either exclude or include the round bone or femur and often includes the knuckle, otherwise known as the sirloin tip.

The upper section where the top round is extracted from is a muscle that isn’t as heavily worked as the flank steak area. This translates to a slightly lighter flavor but is still meatier and more robust than cuts like filet mignon or sirloin.

The best way to guarantee that the top round comes out succulent and tender is to slow roast it. Alternatively, extended marinading or cooking for a prolonged period in a sauce or gravy will also produce good results. 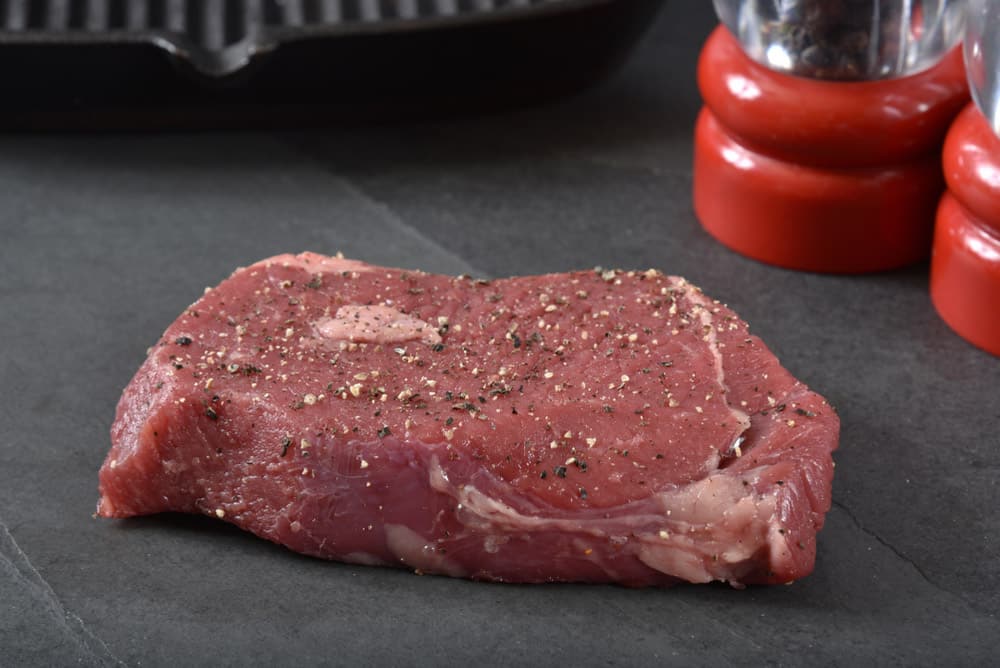 However, slow cooking is typically followed by roasting in the oven or a pan in most cases.

Top round is one of the most affordable cuts of beef for making a roast. As an ultra-lean piece of beef, the calories and fat are lower than other alternatives but quite similar to the composition of flank steak.

While it is possible to tenderize or marinade top round cut into thinner slices served as steaks, top round is typically too lean and tough for frying and other forms of quick cooking. 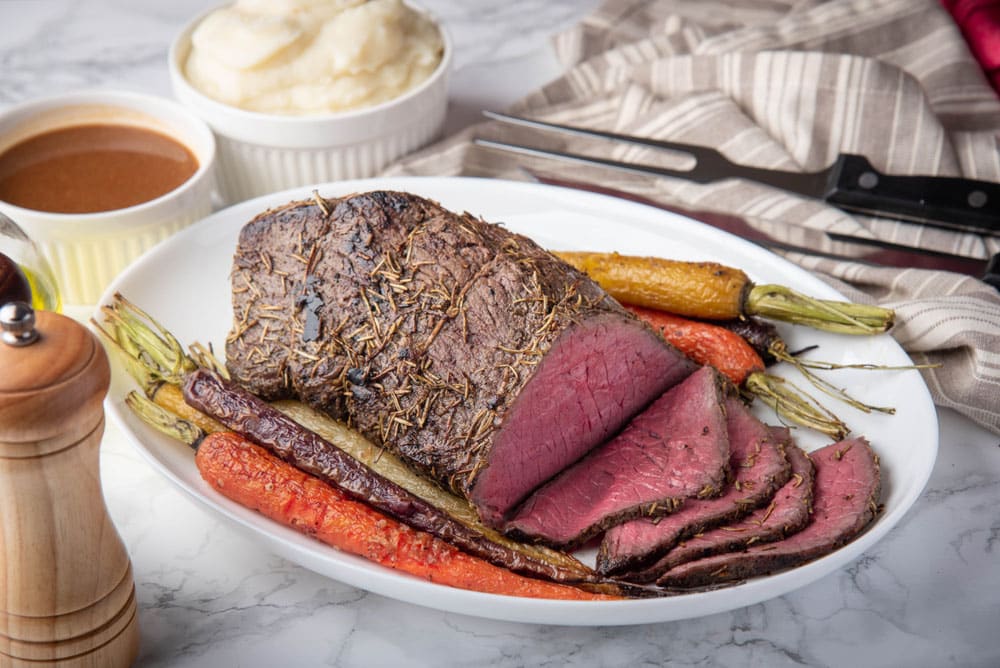 When preparing top round as a standalone steak, it is best to serve it in a sauce or marinade to help it stay moist and juicy due to the lack of fat. When buying this, look out for the red-colored exterior. This will prove that the meat was exposed to oxygen.

You’ll find top round to be the cut of choice for most roast beef. It’s almost always the cut when buying roast beef in a deli. This beef cut is excellent for roasting when you do it at a slow temperature.

If you want an ideal medium rare top round, slowly cook at a low temperature. Then cut it into thin slices and use it in sandwiches. Top round goes well in stews as well.

Top round roast retails for an average of $7.49 per pound in the US.

Similar to flank steak, you can freeze top round for a year and store a cooked one in the refrigerator for four days.

The best substitutes for top round (in order of similarity) are flank steak, chuck, inside round, and porterhouse.

After going through our comparison between flank steak vs. top round, one can clearly conclude that there are indeed many differences between these two fine cuts of meat other than their region of origin from the cow.

The flavor of each is subtly different, and you’ll generally never be found quick-frying top round. It’s much better for roasting. This also means that one won’t typically substitute these two cuts for each other if given a choice. 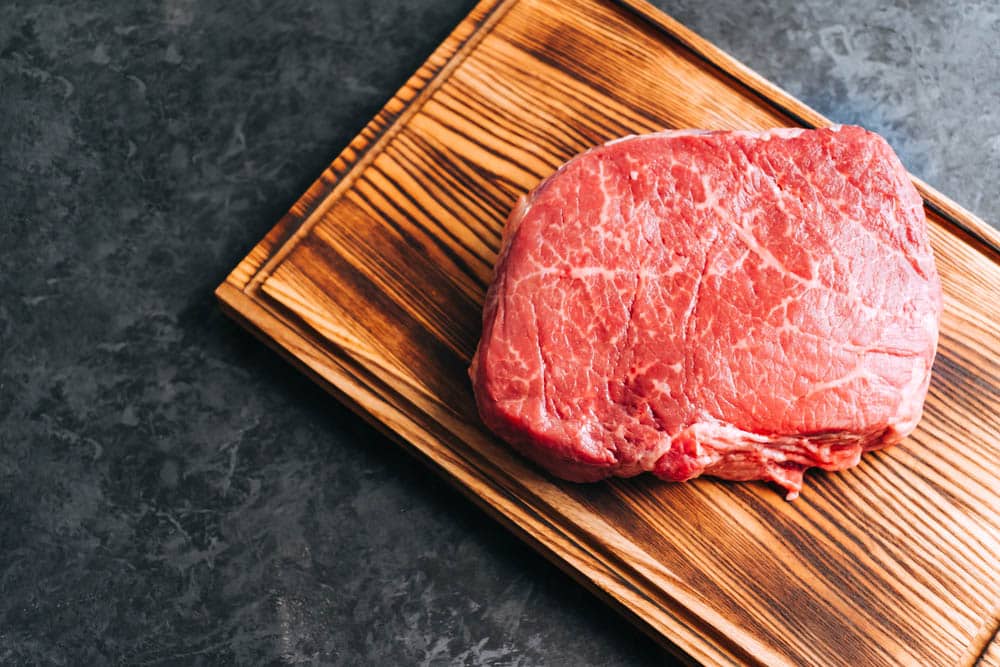 Use each where it excels and you’re guaranteed amazing results from these versatile meats. 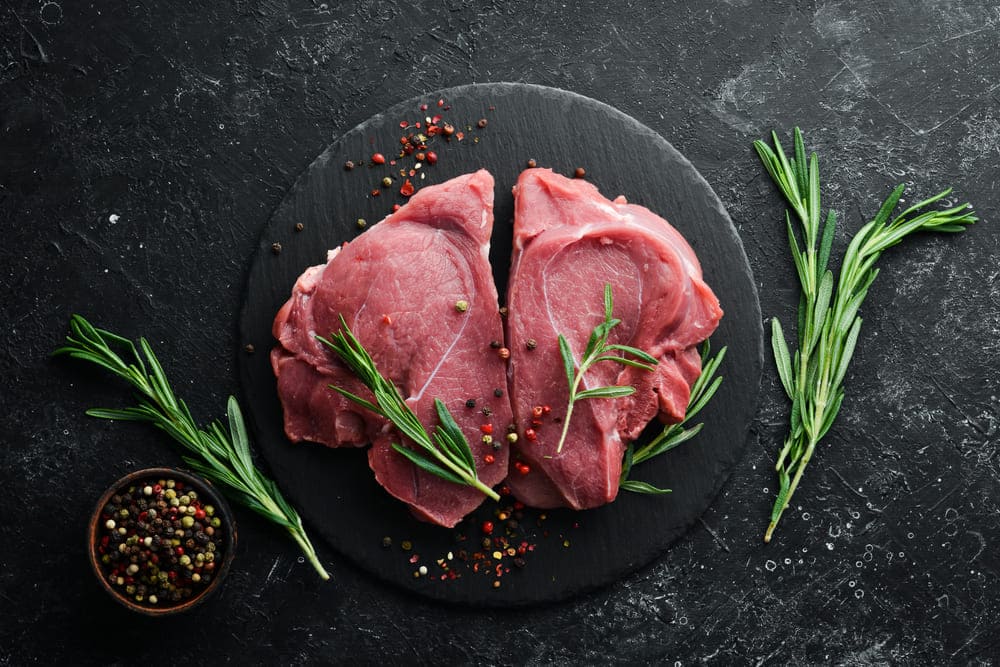