Corn on the cob Instant Pot

Corn on the cob makes me think about 4th of July picnics on a lazy summer afternoon or having fun at a potluck supper. No matter when you like to eat corn on the cob, corn on the cob Instant Pot style is the easiest and fastest method to get it out to those hungry people!

It only takes a few minutes to cook it this way, and it is so easy that you’ll be eating corn on the cob all season long! Here’s a great recipe to get you started with this tasty summer food.

Making Corn on the Cob in the Instant Pot

Firstly, all you need is several ears of corn on the cob, water, and butter, salt and pepper, or other seasonings to taste. To get the corn on the cob ready, you need to cut the cobs in half, as it is likely they are too long to fit into most Instant Pots. You don’t even have to husk the corn when you use this method! That makes it super easy.

If your Instant Pot is a 6-quart or 8-quart model, you need to add around a cup of water into the bottom, then put in a steamer rack. The corn is then layered onto this steamer rack. Usually, about 3 ears will fit on the bottom of a 6-quart Instant Pot, and likely you can fit two more stacked on top. Of course, if your Instant Pot is bigger, you can cook more ears of corn at once. Be sure you only put enough corn on the cob in the pot so that you can still close the lid tightly.

Now, you have to wait for the Instant Pot to pressurize, and that may take a couple of minutes. You only have to cook corn about two minutes in the Instant Pot, so be sure to wait until right before you plan to serve it. If you like softer corn, cook it for three minutes, as two-minute corn is a bit crunchy. Then, do a quick release of the pressure valve and open the top carefully so as not to be burned by the heat from the steam. Then your corn is ready to be removed and seasoned with the butter, salt, and pepper to taste.

Other seasonings to use with corn include making Mexican corn by rolling them in butter, spreading on some mayo, then sprinkle them with some spicy cheese or add some chili powder for extra spice. Or if you like it sweet, try sprinkling on some cinnamon sugar.

Here’s a quick tip for getting off the husks. Cut the ends off the corn right through the husks about one-half inches from the stems. Then press down onto the husk top at the smaller end of the corn, and voila! It should slide right out the husk, and there shouldn’t be any corn silk on it if you do it right. You can keep leftover corn on the cob about five days in the fridge, but these are so delicious likely you won’t have anything left to store!

All in all, corn on the cob Instant Pot style is going to become your favorite summer treat! Yum! 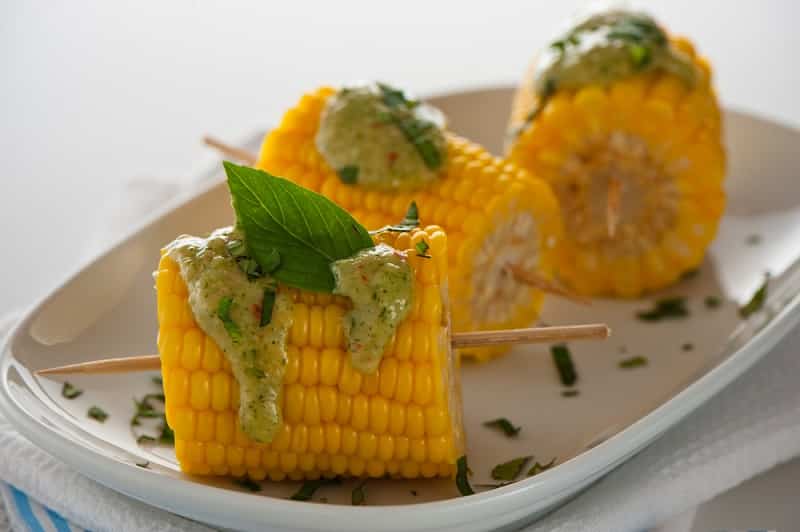