Rice cookers have made life incredibly easy for people who like to cook their own foods. Rice is an essential part of people’s diets and supplies the bulk of carbohydrates. It is also one of the most popularly produced grains in the world.

Needless to say, advancements in kitchen technology have also made it easy for people to cook rice without all of the hassles.

You don’t have to measure the rice grains and put them in a pan full of hot water to cook them properly.

Instead, you can just put them in a rice cooker, which does everything automatically. All you have to do is put rice and water inside the cooker, hit start, and wait.

But it’s a machine, and like all machines, your rice cooker is susceptible to problems and breakage as well. If your rice cooker malfunctions, it could affect your meal prepping. It could absolutely ruin your day as well.

The Aroma Rice Cooker made by Mirama Enterprises is one of the best, though it can cause problems from time to time. For instance, one of the issues that might arise is that your rice cooker may stop heating altogether.

Regardless of the buttons, you press or the amount of water that you add, there is a risk that your cooker will stop preparing the rice properly.

The question is, why does it happen, and what are the solutions available to you? How can you fix this problem with relative ease?

The first step is to identify the cause of the problem. Unless you do that, it would be impossible for you to fix the problem. Several things could prevent your Aroma Rice Cooker from working efficiently.

Why Is My Aroma Rice Cooker Not Heating Up?

Two main reasons may lead to a malfunction or improper performance of your Aroma Rice Cooker: the thermal fuse and the heating coil.

Both of these could lead to a problem with the heating.

The purpose of a heating coil is self-explanatory. It’s a highly resistant coil that heats up when electricity passes through it. The heat generated then cooks your rice.

A heating coil is controlled by two components, a thermal fuse and the current limiting resistor. It’s rarely a case where your resistor is damaged, and if it’s the case, you will have to call the electrician.

A thermal fuse is a lot similar to an electrical fuse. Instead of breaking off from a current overload, a thermal fuse will break off when the temperature it senses goes beyond its thermal rating.

A thermal fuse inside a rice cooker will have a thermal rating of 192 degrees Celsius most of the time.

The thermal fuse inside a rice cooker usually breaks off when the thermostat detects the temperature going above its rating. By breaking off, it keeps your cooker from causing a fire inside your kitchen.

However, what if there is a thermostat malfunction? When that happens, things could go from bad to worse very quickly. The temperature will continue to rise to dangerous levels, and that could short out the heating element which cooks the rice in the first place.

A damaged thermostat may seem like a small thing, but it could cause serious damage to your appliance. In fact, if you are not careful, the appliance may stop running altogether.

The first thing you have to check when fixing your rice cooker is the thermal fuse. This is easy to do. It is also the easiest thing to replace. Following these steps will allow you to replace a thermal fuse successfully:

1. The first thing you need to make sure of is the availability of proper tools, namely, a digital multimeter, a screwdriver, a needle nose plier, and something to strip the wire with.

2. Take the plug out of the power socket and make sure the rice cooker is completely off. don’t leave the plug connected, as there is always some residual current that could lead to a nasty shock.

3. Flip it upside down. You will see a few screws on the bottom. Remove them one by one, and finally remove the metallic cover that was held by the screws.

4. The rice cooker’s internal wiring will greet you. Look for a wire that is connected with a short silver metallic strip. Search thermal fuse on Google for a better picture.

5. Once you have located the thermal fuse, take your digital multimeter and touch its negative connector and positive pins to either side of the thermal fuse. Make sure the multimeter is set to connectivity. What you want is to hear a beep. If you hear it, then the fuse is working fine. If not, then you will have to replace the thermal fuse with a new one.

6. Use the plier to pry the fuse off the wire from both ends. Strip the wire side clean with your wire stripper.

7. Connect a brand new thermal fuse similar to how the previous one was connected with the help of your pliers.

9. Screw the metal plate back into its place.

10. Turn your rice cooker on and see if it works.

If you check the thermal fuse and it works perfectly, you will have to replace the heating coil.

This one is more complicated, and it’s really not something that you should consider doing, especially if you are not very adept at fixing appliances on your own.

If there’s an issue with the heating element, the first thing that you need to do is to visit a professional. This is not something that you can fix easily, so it’s best not to tinker with this.

The worst thing about trying to fix the heating element or replacing it on your own is that it could lead to further damage.

If you damage the Aroma Rice Cooker, your only option might be to buy a whole other replacement. Do you really want to take the risk?

If the appliance is covered under warranty, you should first take it to the service center and see if you can get it fixed in warranty. But, if that doesn’t work, then your only option will be to get it repaired for a price.

However, the good thing is that Aroma rice cookers are relatively cheap, so you won’t have to pay a humongous amount for the repair work. 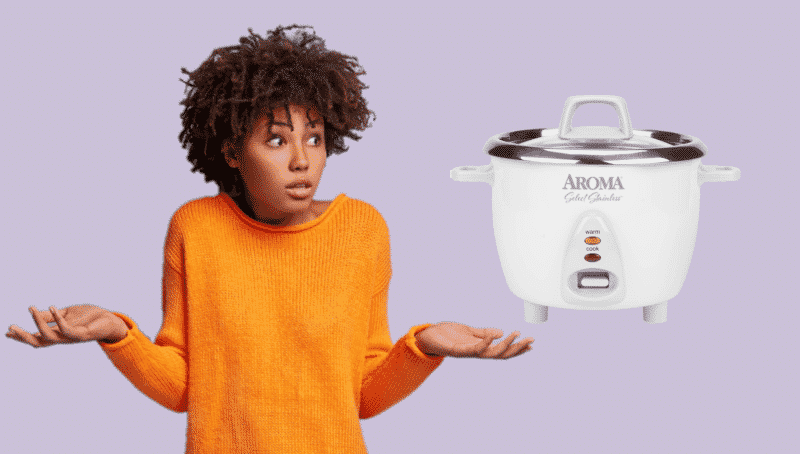