Is it possible to use alcohol in the pressure cooker? That’s a question that a lot of people want to be answered. They worry about whether it is safe and if it evaporates during the cooking process, especially in the light of many blogs giving recipes that use alcohol and saying that it is safe.

We need to be careful because using alcohol in a system under pressure can be considered rather dangerous. This is because alcohol has a low boiling point, and there can be some problematic chemical reactions in the pressure cooker. So with that being said, let’s look a little deeper into this.

A widespread practice is to use a small amount of liquor with a low alcohol volume in the cooker. For example, adding a bit of beer to a beef stew or a glass of wine to a creamy chicken dish. That is not considered dangerous, and many people do it without issues.

The main issue with beer or wine is that because the pressure cooker is a sealed unit, the alcohol is retained in the dish, so don’t use too much! We would recommend that you reduce the amount of alcohol suggested in the recipe. A tablespoon or two is the most you should add for safety and good flavor.

Will the Pressure Cooker Vaporize All the Alcohol?

When the pressure cooker vents, it will vent a mixture of water and alcohol vapor.

When done in the pressure cooker, your finished dish will have a higher alcohol content than if you had prepared it on the stovetop or in the oven. This is because much of the alcohol is retained in the dish.

What About Homemade Vanilla Extract Made with Vodka?

A couple of years ago, someone shared online a pressure cooker method of making vanilla extract with vodka and vanilla beans at high pressure. Shortly after that, someone else suggested putting the mixture into screw-top jars and pressure steaming them on a trivet. This has spread, and today there are about a million similar online recipes.

When asked, no pressure cooker manufacturers are willing to comment on their official policy about how safe it is to pressure cook with alcohol. However, many do not recommend this practice. Warming up any flammable liquid is dangerous unless done under strict laboratory conditions.

We cannot assume that a cooking method is safe just because a blogger posts a video of them doing it online. So read on, and we will explain why it is not safe to make your own vanilla extract using this method.

What Happens when Alcohol is Heated in a Pressure Cooker?

When we pressure cook alcohol, we are essentially re-distilling it. However, rather than it being redirected, cooled down, and distilled, the flammable ethanol fumes are released into your kitchen via the cooker’s pressure release valve. If any spark-ignited these vapors, they could cause the remaining vapor inside the pressure cooker to ignite as well.

So, Can I Never Use Alcohol in My Pressure Cooker?

Another occasion where high ethanol ingredients like brandy or vodka are safe is when you add a spoonful or two to a cake or dessert batter. Mixing it with the other ingredients reduces the alcohol concentration.

Wine and beer are also considered reasonably safe because wine is only 12% alcohol on average and beer is even less at around 4%. Hard liquor, on the other hand, can contain anywhere from 40 to 95% alcohol.

This is why, when pressure cooking with a little wine when the ethanol vapor is released through the valve, even if a spark ignited them, the fire would not travel into the pressure cooker because the food inside would have a low overall ethanol concentration.

Electric Cookers Safer with Alcohol than Stovetop Ones…

This is not strictly true. Even though electric pressure cookers don’t use open flames as stovetops do, their components can still cause sparks with normal use. So even a static spark from the chef’s apron could cause a spark that would ignite any nearby ethanol flames in the kitchen.

Even the natural release method for such recipes is not safe. That’s because the valve and the pressure cooker chamber are not sealed during natural release when most of the ethanol is evaporating. So again, a spark could cause a disaster.

There are no pressure cooker manufacturers, government organizations, or universities with safety-tested pressure cooker equipment for testing highly flammable alcohol. Therefore, for the above reasons, we do not recommend using recipes that use non-evaporated liquor while you are pressure cooking, except for a bit of beer or wine. 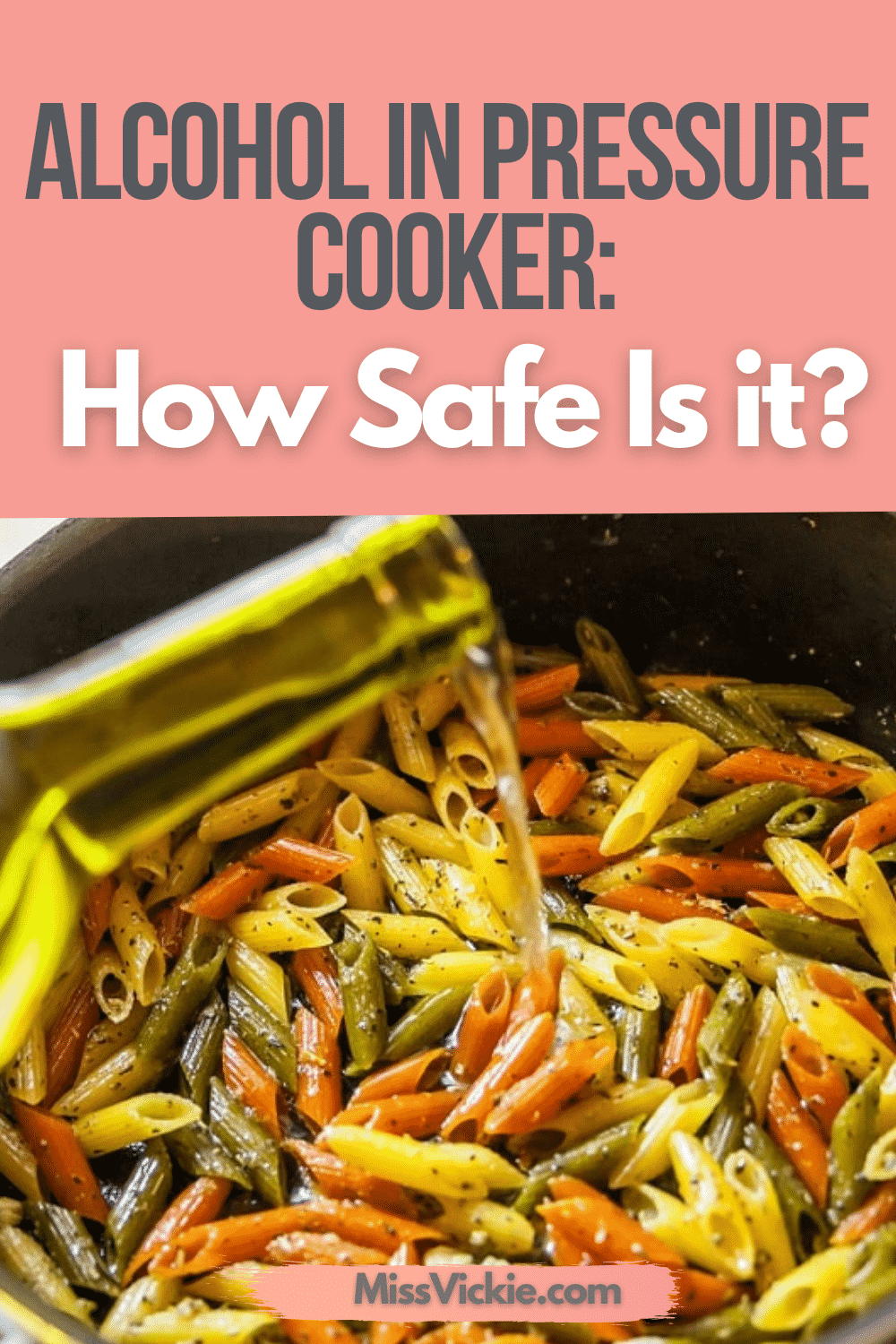