Canning is one of the greatest innovations to be discovered in food science. Although food preservation has been in existence as long as human beings have, some techniques such as drying, smoking, salting and fermenting have been older than others. Food preservation by canning and heat treating did not start taking place until much later during the late 18th century.

Food preservation methods such as canning have always been vital as they prevent increased instances of food spoilage and wastage. Three hundred years ago, human beings did not have access to the modern amenities that we have today. With no ability to refrigerate or cool, human beings were forced to invent techniques and methods that could allow them to keep food fresh for long without it causing illness.

As such, many early communities in the world relied on food preservation breakthroughs such as salting. Though these ancient food preservation methods were handy in allowing people to continue living off their food sufficiently especially during the dry seasons and the cold winter months, most curing methods were done poorly, which would often lead to disease outbreaks like scurvy. These techniques would also derive the food of their essential minerals, therefore, resulting in minimal nutritional value.

The History of Canning

It was not until the late 1700s that Napoleon Bonaparte began the process of searching for a better food preservation solution. To motivate inventors, he offered 12,000-franc pieces to the individual that would come up with an ingenious way of safe and reliable food preservation. The person that took up Napoleon’s challenge and won was none other than French chemist, Nicolas Appert.

How the process of food canning came to be

In the late 1700s, Napoleon’s troops were on a rampage. Concerned about feeding his growing army sufficiently so that they could perform as expected, Napoleon offered a cash prize to anyone that would come up with an inventive way to package and preserve the food that his military forces needed to keep going.

It was at this point that the dash to create a system of packaging food began. The right method was not found until 1809 when Nicolas Appert discovered canning, in its most rudimentary form. Appert figured out that when food was placed in a glass bottle before being heated up, it had a higher chance of lasting longer compared to any other preservation method that existed at that time. Needless, to say, Appert was granted the cash prize.

Although Appert had figured out a new method of food preservation, he did not fully understand the science behind it. Appert deduced that as long as the bottles being used to preserve the food remained sealed to exclude air, the food contained in them would remain fresh and edible.

Much later on in 1864, a French scientist by the Louis Pasteur made the correlation between microorganisms and food spoilage. It was this discovery that improved upon Appert’s earlier breakthrough. As the years passed, more and more discoveries were made by other scientists that improved upon the dependability of the canning process as we understand it today.

While Appert’s method was instrumental in helping to prevent food spoilage, his process of canning was not without its problems. For instance, the glass jars used for canning were difficult to handle and transport, and in fact, many had a propensity to explode. Years later in 1811, an Englishman (who also had French origins) known as Philippe de Girard came up with the substitute method of storing food in a tin can rather than doing it in glass jars.

British businessman Peter Durand then patented the method on his behalf and sold the idea to another merchant known as Bryan Donkin. Donkin was able to deliver this new method of food preservation to the royals, King George III and Queen Charlotte, in June 1813 when he served the royal family beef from a tin can for the very first time.

Following approval from the royal family, Donkin’s tin cans started being reproduced in a mass scale. Tin cans did not arrive in America until 1825, when Thomas Kensett and Ezra Daggert began selling items such as fruits, veggies, and meats, in tinned cans to customers in New York. Canned food did not become a major hit in America until 1856, when the USA’s very own, Gail Bardon, invented condensed milk. When the Civil War finally broke out in America, the demand for canned food items increased exponentially due to the war.

Although canned food had already become accepted at this point, the process of producing the cans was slow and problematic. In 1849, Henry Evans patented the first machine to manufacture cans quickly. His machine could help to produce about 50 cans in an hour; before, only about 5 to 6 cans could be produced in the same timeframe. Once Evans’ method of canning was improved upon, everything from corned beef to tuna became easy to can- even the ever-mysterious SPAM.

Though canned food items were a God sent during the war, the cans that were used at that time were reinforced with strong metals that made them very hard to open. Most people relied on the use of a hammer and chisel to get their cans open. The first can opener was created in 1860 by Ezra J. Warner. Though this can opener was elementary, it made it easier for canned food items to be consumed. The first commercial food opener for home use was not created until the 1920s.

In 1960, a man known as John Mason introduced the first glass jar capable of home canning. Though Mason’s jars were deemed too expensive for farmers to afford, they paved the way for individuals to start canning their own fruits and veggies rather than rely on what was available in grocery stores at that time.

Since then, home canning has grown to become a hobby for many. Today, food canning at home can be done through a variety of ways and techniques. Canning is one of the best ways for home cooks to preserve the tastes of the season from peaches during the summer to apples in the fall. 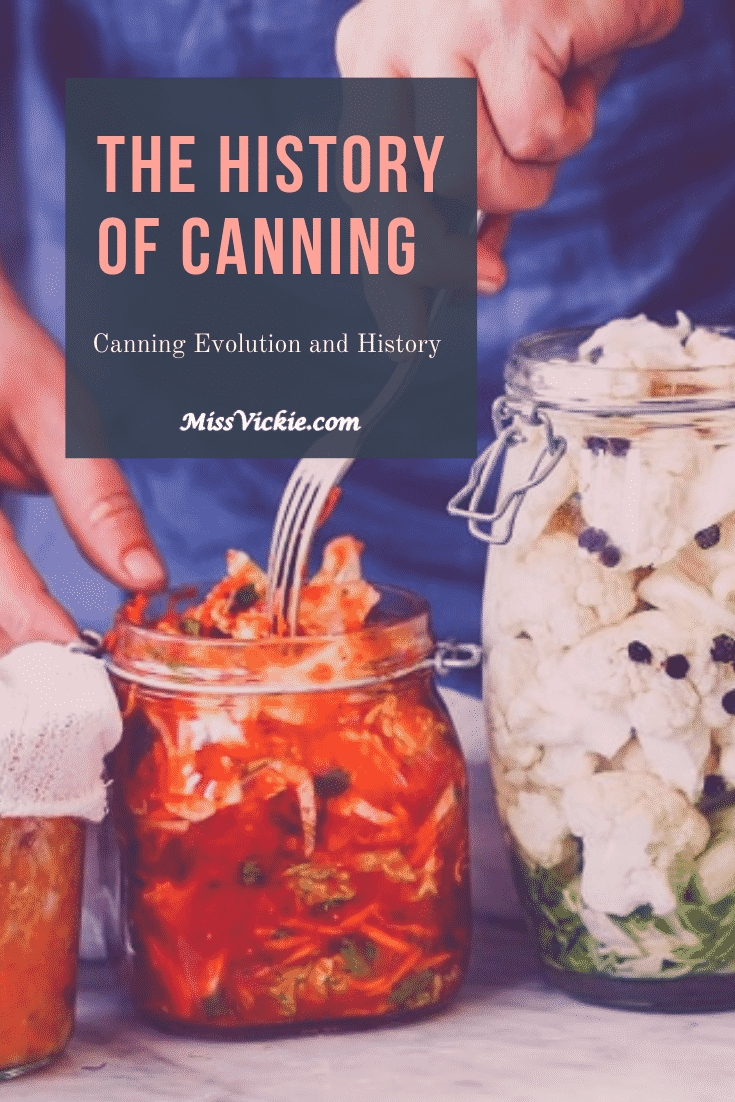