Beef is the favorite type of meat for everyone who has fallen in love with steaks. The steaks are cut from beef. There are different steak cuts with beef, and skirt steak is one of them. However, there are some substitutes for skirt steak, and we are sharing them with you!

Skirt steak is the popular beef cut that tends to be long and thin. This steak is suitable for making chimichurri and carne asada. The skirt steak cut can be easily bought from the grocery stores. This cut is extremely flavorful which is marinated for grilling, searing, and panning. In addition, skirt steak can be broiled as well.

Skirt steak is cut from the short plate (the ground beef is also cut from it). In addition, the cut is called outside skirt steak and inside skirt steak. When it comes down to the grocer stores, it is labeled as fajita meat and skirt steak. A little trivia is that this cut makes perfect cheesesteak sandwiches. All in all, it’s cooked in a cast-iron pan or a hot skillet.

Skirt steak can be made with olive oil or butter to ensure the meat is seared to perfection. However, it has a short cooking time and is cooked at medium heat temperature. That being said, long cooking time will result in a tough texture. So, let’s have a look at the substitutes!

There are different names of flap steaks out there, such as flat meat, sirloin tip, and bavette. The skirt steak is often confused with flap steak, which makes it’s a good substitute. The appearance is somewhat the same. The flap steak is cut from the bottom of the sirloin. It has open and lengthy grains. As far as the flavor is concerned, it has a strong beefy flavor.

The texture makes it suitable for Mexican recipes and goes perfectly in fajitas. It has a loose grain which means it can hold the marinade for sure. You’ve to slice the flap steak against the grain to make sure you get the best out of it. In addition, cutting against the grain will lead to chewy meat, but it won’t toughen up the texture.

Flap steak will be much more economical because this cut can be cut out easily. However, it will lack the tenderness of the skirt steak.

This steak cut is carved from a cow’s shoulder. The flat iron steak has the leanness, size, and shape of the skirt steak. This cut has a tender texture and has a stronger flavor. On the contrary, flat iron steak tends to have higher marbling, and the taste will be beefier. That being said, it can be sliced into tacos and subs (the thin slices). Flat iron steak has to be seared on the higher temperature setting.

Once the steak is seared, it can be roasted in the oven at a moderate temperature setting. In addition, it can be cooked in the slow cooker as well; it will lead to a tender texture.

When it comes down to the cow’s diaphragm, it can be chopped into two cuts. One cut tends to have tough muscles, while a hanger steak has much more flavor. For the most part, it’s known to be the most tender cut (after tenderloin, of course). It is known as butcher’s steak and hanging tenderloin as well, so don’t get confused.

As far as the texture is concerned, it has a slightly grainy texture with a rich and strong flavor. Hanger steaks are cooked at medium-rare or rare temperatures. This temperature setting ensures that meat doesn’t get chewy or tough. It can be marinated and rubbed with spices. All in all, this cut goes fine with strong spices.

The beef tenderloin comes with different names, such as eye fillet, fillet, and filet mignon. It is cut out from cow’s loin. However, this substitute is expensive. As for the flavor, it will be mild, but the tenderness is top-notch. Beef tenderloin can be sliced into thin pieces and grilled.

As the name suggests, flank steak is cut from the primal flank (it is also cut from the belly muscles). This cut is lean and will be extremely tender when cooked. On the other hand, the flavor will be less beefy. The bottom line is that both flank steak and skirt steak have long and flat cuts with a grainy texture. 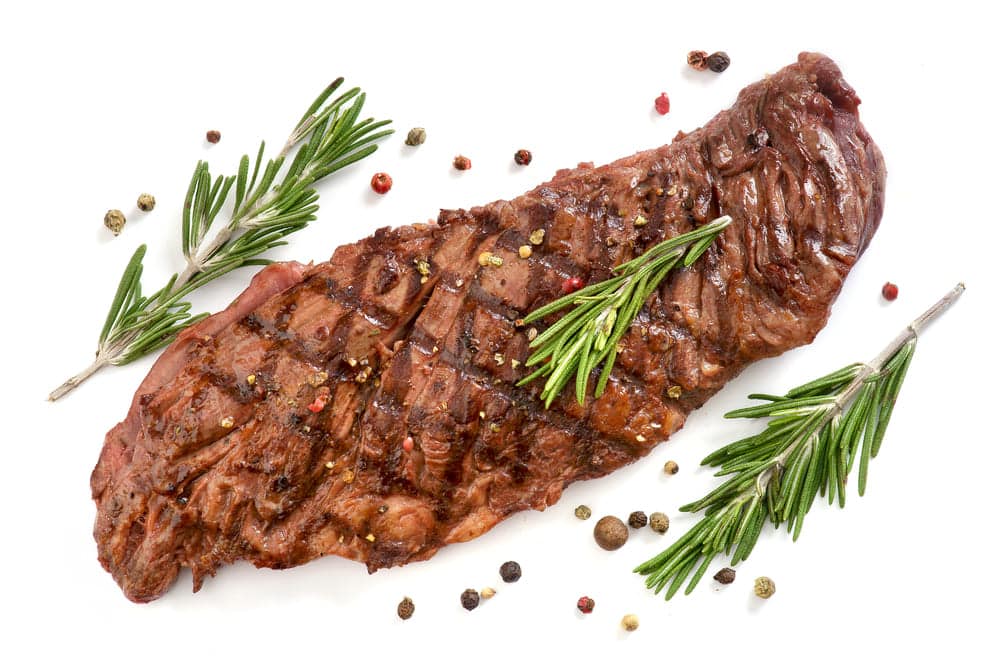