No kitchen can be complete without rice, but there are so many varieties to choose from! With over 120,000 varieties available where do you even start? Each variety has a specific flavor and not every type is suitable for all recipes using rice.

Keep reading if you want to know more about the different types of rice while we’ll be mainly focusing on Sona Masoori rice vs jasmine rice.

This table highlights the main differences between Sona Masoori rice and jasmine rice making it easier for you to decide which one is best for your kitchen pantry!

What Are the 3 Different Types of Rice?

Rice is an essential food source, used in many recipes around the world. It features center stage in most Asian and Indian cuisine and is used as a side dish to complement a range of delicious recipes. 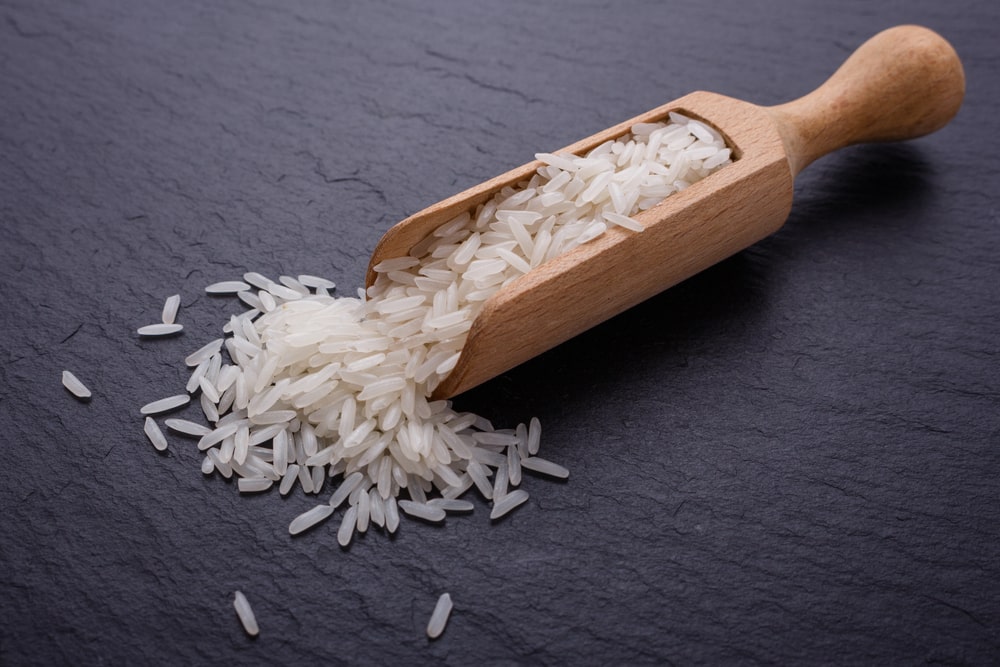 Rice varieties are categorized according to kernel size, starch content, flavor, and milling degree. To simplify the classification of rice, this food source is classified into 3 different types.

Long-grain rice is identified by the kernel’s length which is three to five times longer than its width. Two of the most popular rice varieties that fall into this category are jasmine and basmati rice.

When prepared and cooked properly, long-grain rice should be tender and fluffy with minimal stickiness or clumping. This type of rice is the perfect side dish for stir-fries, curries, and hearty casseroles. 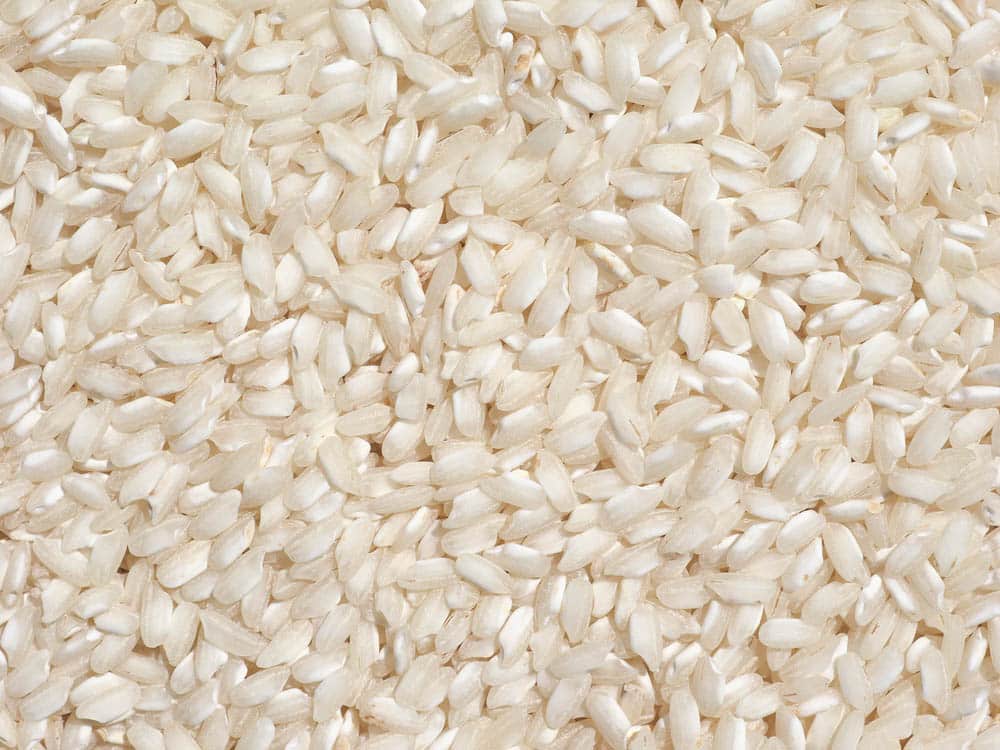 It’s not as starchy as short-grain rice and depending on how it’s prepared and cooked, it’s fluffy and moist. But, this type of rice does tend to solidify and clump when cooled down after cooking. Sona Masoori and popular white varieties such as arborio rice fall into this category.

This type of rice is plump and round becoming starchy when cooked. It swells and becomes sticky, creating clumps when cooled down after being cooked. Also known as glutinous rice because of its glue-like texture, its best eaten with chopsticks.

Short-grain rice works well for desserts and as an ingredient in sushi dishes. The popular varieties include Chinese black rice and Japanese short-grain rice.

Sona Masoori Rice vs Jasmine Rice: What Are the Differences?

While not as well-known as jasmine rice, Sona Masoori rice makes a delicious side dish for curries, a bowl of yogurt, or as an ingredient in sweet dishes. However, there are differences between these two types of rice worth noting when deciding which one to use in a recipe.

Sona Masoori rice is medium-grain rice best known for its aromatic and lightweight texture. It’s a hybrid or cross combination of two rice varieties – Sona and Mahsuri – and is sometimes known as Sona Masuri or Sona Mahsuri.

Where is Sona Masoori Rice Grown?

This specific rice variety is grown in three Indian states, including Karnataka, Telangana, and Andhra Pradesh. Sona Masoori rice is often considered a premium variety which is why it’s exported to the Middle East, Singapore, Canada, America, Australia, and Malaysia.

While a medium-grain rice type, Sona Masoori is lightweight and delicate with a distinctive, delectable flavor. The grains are normally unpolished. It has an amazing aroma which makes it suitable for Asian cuisines.

Sona Masoori is available in white and brown varieties, with the latter being the healthier choice. The best thing about this rice is that the taste is sweet and it doesn’t get sticky even when boiled.

In addition, Sona Masoori rice is commonly available, has a low-calorie count making it a good choice for weight loss, and it’s full of nutrients owing to unpolished grains. It has a glycemic index of 51, making it a better choice for diabetics.

How to Use Sona Masoori Rice

Sona Masoori rice has a low percentage of starch making it a good choice for people following a healthy eating plan. This type of rice can be used in a wide range of recipes including:

In addition, the rice can be seasoned with turmeric or saffron (or a combination of both spices), bringing out its unique flavor while giving it a warm, yellow color. Some superstores even sell Sona Masoori rice in its boiled form, saving you the hassles of preparing it yourself.

Sona Masoori rice is a wonderful choice for babies (babies aren’t generally allowed to consume rice, but this variety is fine for them). However, make sure that the rice is properly boiled before feeding it to your infant. 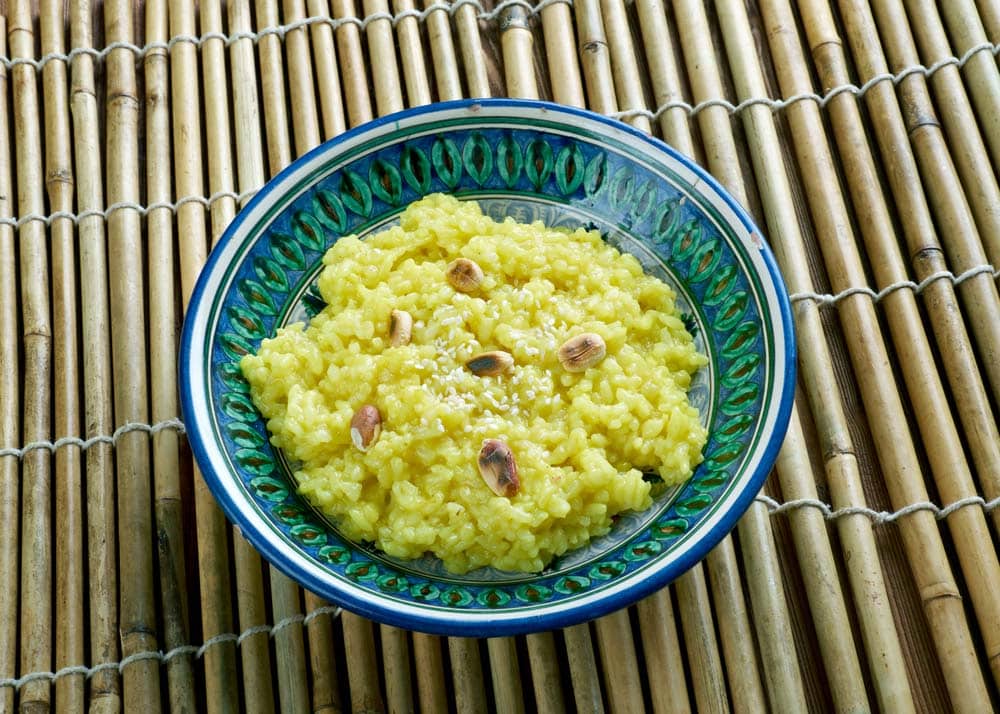 This rice can be roasted to resemble oats, delivering loads of nutrients. As for the availability, it’s easily available in most grocery stores but it tends to be more expensive because of the premium flavor.

Jasmine rice is a long-grain rice variety, belonging to the fragrant- rice category. It’s known for its strong aroma which does fade over time. For this reason, jasmine rice is best consumed fresh after harvesting.

Where is Jasmine Rice Grown?

While originating in Thailand, jasmine rice is also grown in Laos, Vietnam, and Cambodia. A popular rice variety, it’s exported to the United States, China, Canada, Singapore, and Hong Kong as well as to other countries such as Europe and Africa.

The rice is known for its soft and moist texture, and when cooked, it has a slightly sweet flavor. For this reason, it’s sometimes known as Thai Fragrant rice. While some rice when cooked, might cling together or get sticky, jasmine rice grains stay separate.

This rice has a deep, rich, and appetizing flavor. When harvested, the farmers cut the long stalks and thresh them. The grains can be milled to remove germs and polished to make white rice.

White jasmine rice has a dry texture while brown jasmine rice has a nutty taste closely resembling that of oats. Jasmine rice varieties have a glycemic index ranging between 68 and 80, with the brown type being the healthier option for people struggling with cholesterol issues.

There are black, purple, and red jasmine rice varieties with different nutritional values. In general, jasmine rice is loaded with nutrients and minerals such as potassium, calcium, vitamins B1 and B6, magnesium, selenium, iron, and phosphorus. 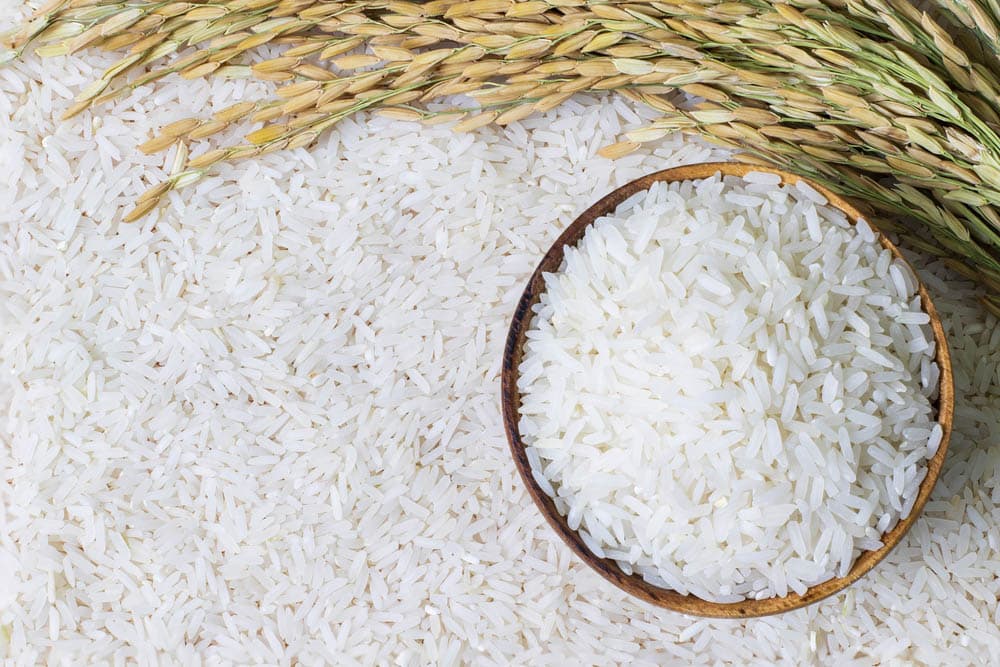 Jasmine rice has won numerous awards in the culinary world, given its high-end flavor, texture, and size.

How to Use Jasmine Rice

Jasmine rice can be made in different ways but steaming it is the best method if you want to avoid it becoming slightly sticky and clumping. When preparing jasmine rice for cooking, rinse the grains beforehand.

Leave it on the stovetop or in the rice cooker a few minutes after it’s done if you want to capture its sweet aroma while getting a slightly sticky texture. Jasmine rice can be steamed to make stir-fries or added as a side dish with braised, grilled food, or fried food.

It’s delicious tossed in with stir-fried vegetables or as part of a spicy curry dish. Jasmine rice works well with Thai cuisine. Adding jasmine rice to soups gives the recipe a drier texture while reducing the watery consistency.

However, this type of rice isn’t suitable for making fried rice as it most often ends up being soggy and soft. Depending on how it’s prepared and cooked, jasmine rice has a somewhat fluffy and sticky texture, making it suitable for various Asian desserts, such as kheer. 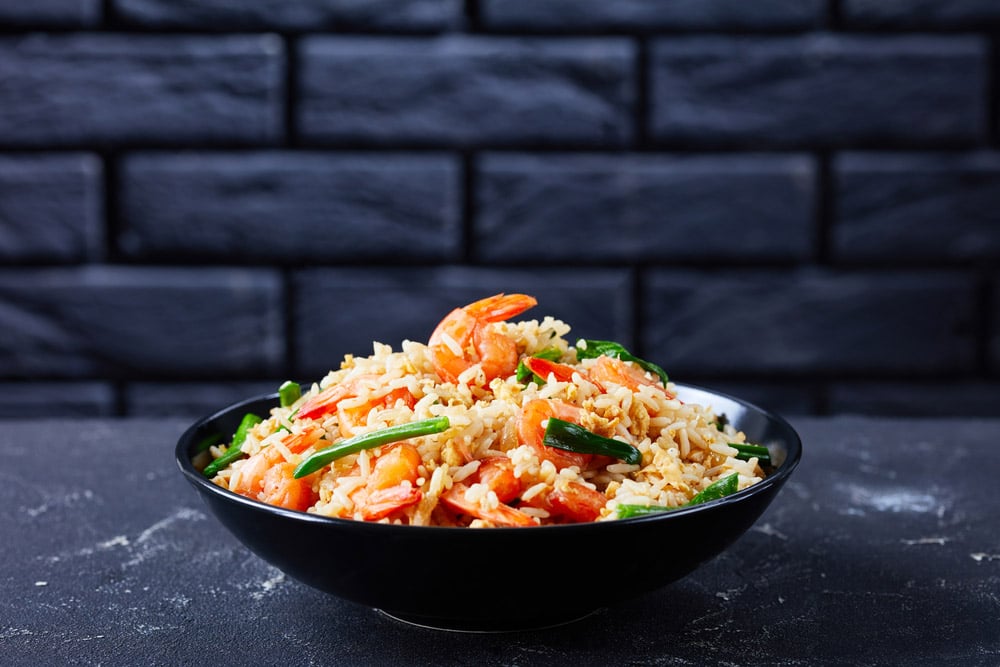 Which Should You Choose?

Both complement a range of dishes and are most popular in Asian and Indian cuisine. Jasmine rice has a higher GI while Sona Masoori rice is low in starch making it a good choice for those on a weight-loss diet and who are diabetic.

Jasmine rice is favored for its high-end flavor and aroma while Sona Masoori rice is a popular choice for South Indian dishes. Which one will it be for you? 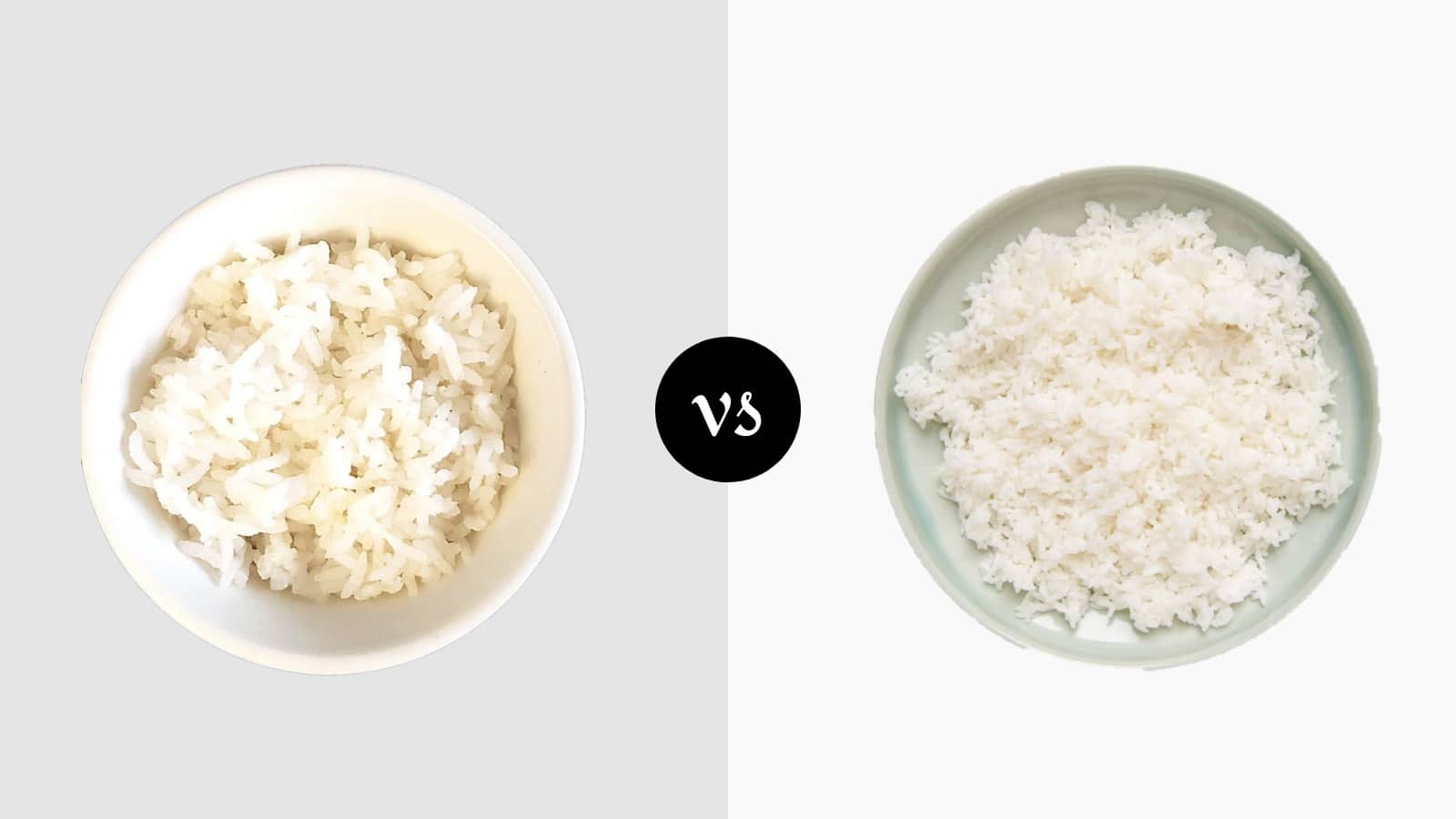