If you live in a high-altitude area, you may have heard that pressure cookers work a lot better in high altitude areas than in low ones.  That is why it is recommended that you invest in a pressure cooker if you are from a high-altitude area. When cooking at high altitudes, there are certain things that you have to keep in mind such as temperature and time because most cooking recipes are actually made for cooking at sea level.

There is no single formula that can be used to adjust your recipes for high altitudes as the adjustments that you need to make will be affected by variables such as your altitude, humidity levels and of course your recipe. But once you hit an elevation of 3,000 feet or more above sea level, you will almost certainly need a pressure cooker.

Note: These temperatures will all vary according to whatever your current barometric pressure is.

As you may already know, pressure cookers work so well because they are able to increase the pressure on liquids, which in return increases the boiling point of water. Therefore, if you live in a high-altitude area, it is important to make adjustments to your pressure cooker if you are to fully enjoy all the wonderful benefits of pressure cooking.

For your pressure cooker to work for you, it is recommended that you increase your cooking time by 5% for every 1000 ft above 2000 ft elevation.

Most cooks at sea level can survive with nothing but a few good pans and a great stock pot. However, with a pressure cooker, not only do you get to save time when cooking, but you will also save energy and eat better too.

At high altitudes, the pressure is low. This low pressure in return causes water to evaporate a lot faster and at lower temperatures. If you live in an area that is 3,000 feet and lower, the effects of increased elevation may only be negligible- at 500 feet above sea level, water will reach a boiling point at 211°F instead of 212°F. Because the difference is so small, you may not notice anything at all when cooking with your pressure cooker, although it is still a good idea to make adjustments as required if you are to get the best results.

On the other hand, if you live anywhere above 3,000 feet or higher, you will definitely start to notice how the elevation affects your cooking time and ability. At altitudes of 3,000 feet and higher, water will reach its boiling point at 207°F instead of 212°F. At 5,000 feet, the boiling point will lower to 203°F and at 7,500 feet, the boiling point will plummet all the way down to 198°F, which is a huge difference that will affect how long it will take to cook your food.

What this means is that cooks at high altitudes usually have to cook foods a little longer than the cooks down at sea level would.

The amount of pressure in a pressure cooker unit can be increased easily using the easy to read gauge that is available on all cookers. At high altitude areas:

What else do you have to keep in mind when using pressure cookers at high altitudes areas?

Granted, most people do not expect to do math when cooking, but it is necessary if you live in high altitudes. To calculate how much cooking time you would need, first find out the altitude of the area you reside in to find the appropriate percentage increase.

The lids must be secured tightly

Apart from making adjustments to the pressure, the lid must also be kept tightly sealed at all times when cooking with a pressure cooker in high altitude areas. Keeping the lid on allows your food to cook properly without drying out as you should expect water to evaporate a lot faster. 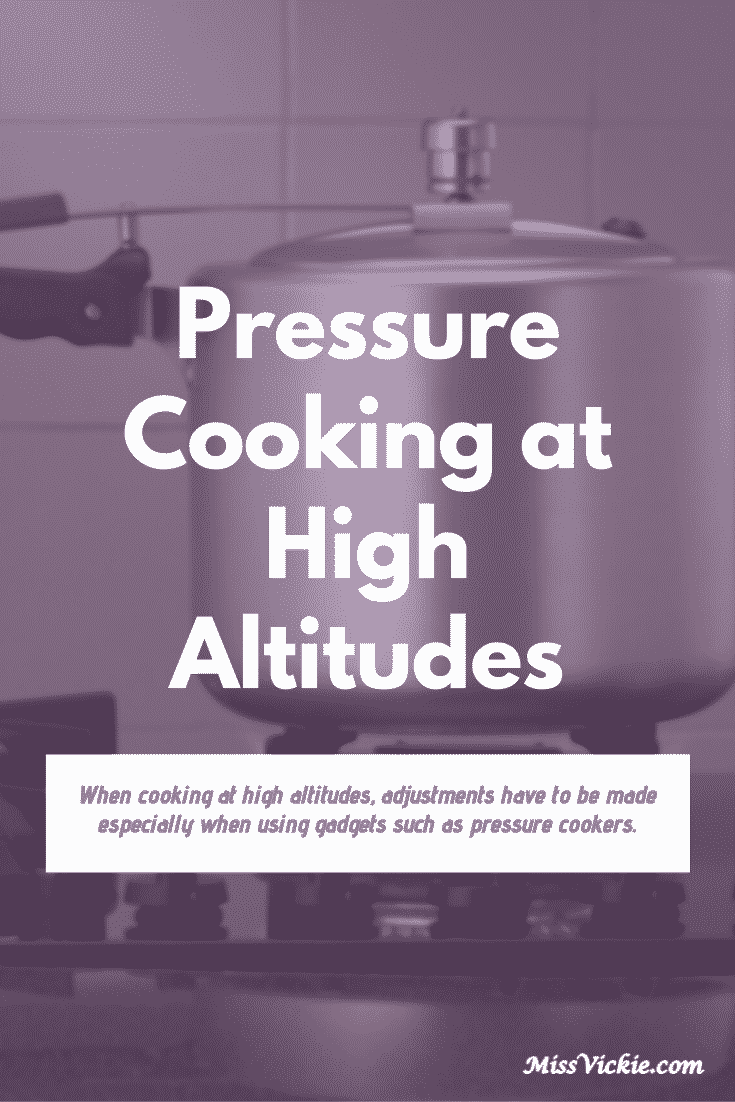