The Boiling Point of a Pressure Cooker

A pressure cooker boils water at a higher temperature than can be achieved by conventional boiling on the hob or cooking in an oven.

It does this by steam power! Because the pressure cooker is a sealed vacuum unit, the steam increases the atmospheric pressure by 15 lbs PSI (per square inch). This means the boiling point is increased from 212 degrees Fahrenheit to 250 degrees Fahrenheit.

It is this higher boiling point temperature that cooks the food so quickly. The steam also helps improve cooking time because it is forced back into the food you are cooking meaning that it is always succulent and does not dry out.

The pressure cooker was developed in the 1600s by a Frenchman called Denis Papain. At this time in history, inventors were experimenting with steam power, and it was their developments which led to the development of the Industrial Revolution in England. Papain was slightly ahead of the curve with his steam power invention.

Originally the pressure cooker was called the Digester but this changed over time. The early prototypes were inclined to explode but over the centuries, the design has greatly improved and today pressure cookers are perfectly safe and are used all around the world.

That said the fundamental principles of the pressure cooker are unchanged. The elevated boiling point combined with steam cooking makes the pressure cooker fast and convenient and whether you use the latest high tech electric model or a basic model with a jiggle top the process is unchanged.

For people living at high altitudes, the increased boiling point of a pressure cooker is a boon. Many US states including Texas Colorado and California are situated at 3000 ft above sea level and when you try to cook conventionally at high levels you can run into problems.

Because there is less atmospheric pressure at high altitudes and the air is thinner, water boils at a lower temperature. This means that it can be impossible to cook food at the correct temperature and that the water tends to evaporate very quickly.

By contrast, a vacuum-sealed pressure cooker enables the liquid to reach boiling point in the usual way so you don’t have to compensate with adding liquid or extending the cooking time. Whether you live at a high altitude or sea level, the boiling point of a pressure cooker remains fairly constant.

The elevated boiling point of a pressure cooker is the main feature that sets this method of cooking apart from all others. It means that you can prepare beans without pre-soaking, roast cuts of meat, create casseroles and make anything you want in a fraction of the time of conventional cooking.

Although steam engines and machinery are now largely redundant, it is a marvel that the pressure cooker which was developed using the same technology in the 17th century is still in daily use today. 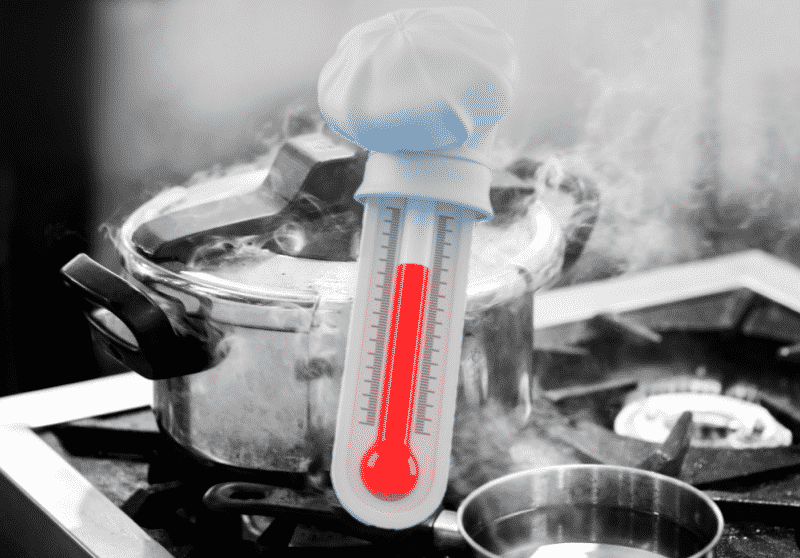