By now, you may already know that a pressure cooker is one of those appliances designed to make your life easy. Pressure cookers cook food faster compared to many other cooking methods, including boiling or braising; they do so without losing the nutrient content of the food being prepared. Although pressure cookers are completely safe for use today, it is not unusual for them to be accompanied by weird or strange sounds. Even though it is completely natural to grow worried about these sounds, there are some things that you should know about why pressure cookers produce the noises that they do.

Why do pressure cookers produce noises?

The hissing created by your pressure cooker is produced because of the processes happening within the cooking pot. As your pressure cooker continues to heat up, it increases gradually, causing the water to boil at extremely high temperatures. When the pressure reaches its peak, any leak or escaped steam may cause the vent on the lid to pop. Some pressure cookers hiss during the cooking process while others do not produce any sounds at all. Depending on the manufacturer, brand, and quality of your cooker, the hissing sound created may be more in some cookers and less in others.

The hissing sound that is created during pressure cooking is closely similar to the same one that is produced by a whistling kettle. All pressure cooker lids come designed with a vent that is used for releasing steam so that safe pressure levels can be maintained within the pot when cooking. When pressure builds up to extreme levels, the safety valves release to get rid of excess pressure which could result in a hissing sound.

In some rare instances, pressure cookers also hiss if the cooker is not sealed properly or if the valve is left accidentally open. If the pot starts to hiss before the cooking process is complete, these issues can be rectified so that normal pressure can be maintained. Some pressure cookers might also produce a hissing sound when the pressure is too high. The cooker will produce a hissing sound to alarm the cook that pressure should be brought down.

Can you avoid the hissing?

If you want to avoid the hissing produced by some pressure cookers, you should seriously consider investing in an electric model. Unlike some of the pre-electric predecessors and stovetop brands that emit a unique hissing sound as the steam is released during the cooking process, electric pressure cookers are relatively quiet.

They come built with mechanisms like vents and special valves that allow any excess steam that is accumulated throughout the cooking process to be released slowly and quietly. Electric pressure cookers are quieter than most stovetop varieties because they can regulate pressure more efficiently, which reduces the impact of the hissing sound produced.

Should you be worried when your pressure cooker hisses? 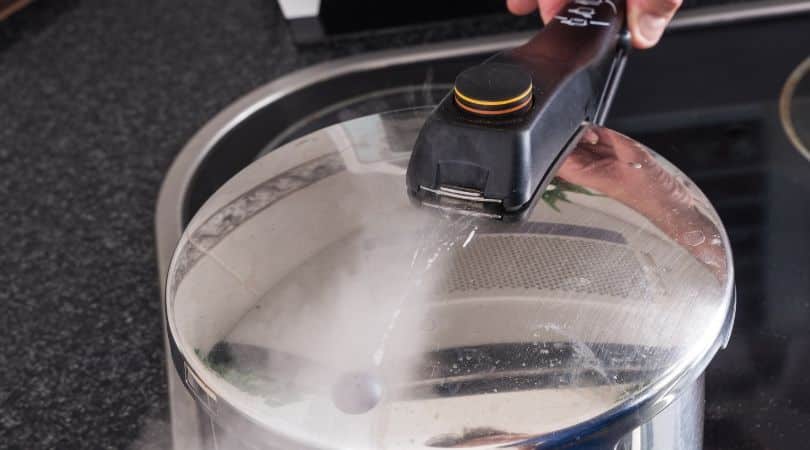