Please note that it can be very easy to overcook poultry when preparing it in a pressure cooker as it is usually impossible to check the temperature or the level of doneness when your meat is cooking. As such, you should always pay careful attention to the recipes, as well as the cooking times to avoid mishaps in the end.

What to remember when pressure cooking meat, poultry, and eggs

Hard-boiled eggs are great for preparing in a pressure cooker. Simply place some eggs in a steamer basket and add some water before steaming. When done, the shells will fall right off.

When it comes to poultry, thighs tend to perform a lot better than breast when put in a pressure cooker. Because chicken breasts are usually leaner than thighs, they only require a few minutes of cooking time before they turn from juicy to dry and overcooked. Because thighs contain a lot more fat content, they are not easily prone to drying out.

Try not to shred or dice breasts

Even if you are following a recipe that calls for chunks or cubes of chicken breasts, it is generally better and faster to cook the meat whole. If you would still like to have it in chunks, consider cutting it up or shredding it into your preferred size after the cooking process has already been completed.

If you are using turkey or chicken, the size of your bird matters a lot. Generally, you should avoid cooking birds that are larger than 4 pounds. This is because you want to make sure that your bird will fit easily into your pressure cooker without getting stuck against the edges. A smaller bird will also be easier to cook through evenly compared to a large one.

Right in the pot or in a trivet?

When preparing poultry, you can cook it in a trivet, if you want your chicken to steam or you can prepare it directly in the pot. Regardless of whichever method you pick, be sure to add sufficient amounts of water as instructed by your recipe.

Whenever you are cooking with a pressure cooker, you might not get the crispiest skin like you would if you roasted or deep fried your chicken. Like slow cookers, pressure cookers work by creating a moist environment that does not allow the chicken to dry out. If you are going for dry skin, you may have to make it crispy on your stovetop before serving.

If you want the best pressure cooker results for your poultry, you should avoid mixing different cuts of meat together. As such, white meat should not be mixed with dark; the same goes for bone-in and de-bonded cuts. Usually, meaty areas such as drumsticks and thighs, as well as bone-in pieces require longer cooking times compared to leaner and boneless pieces.

* When using cuts of meat over 1 1/2 inches thick always use a meat thermometer to check the temperature for doneness. Find out more by looking at the temperature charts.

1 Liquid amounts given are based on the average used by today’s modern pressure cookers with a spring valve pressure release system. Use the recommended minimum given in your owners manual. The amounts can vary depending on the type of pressure cooker and the length of cooking time. When using a jiggle top model plan on doubling the amount of liquid used. check your owner’s manual for the manufacturers recommendation, generally the minimum amounts recommended for jiggle top models is 1 cup, and 1/2 cup for the valve type pressure cookers, which is sufficient for approximately 15 minutes of cooking time. to determine the amount of liquid used by your pressure cooker, do the Test Drive. Pressure cookers will lose more water in cooking time over 15 minutes, or if the heat is not lowered correctly once it come to pressure. 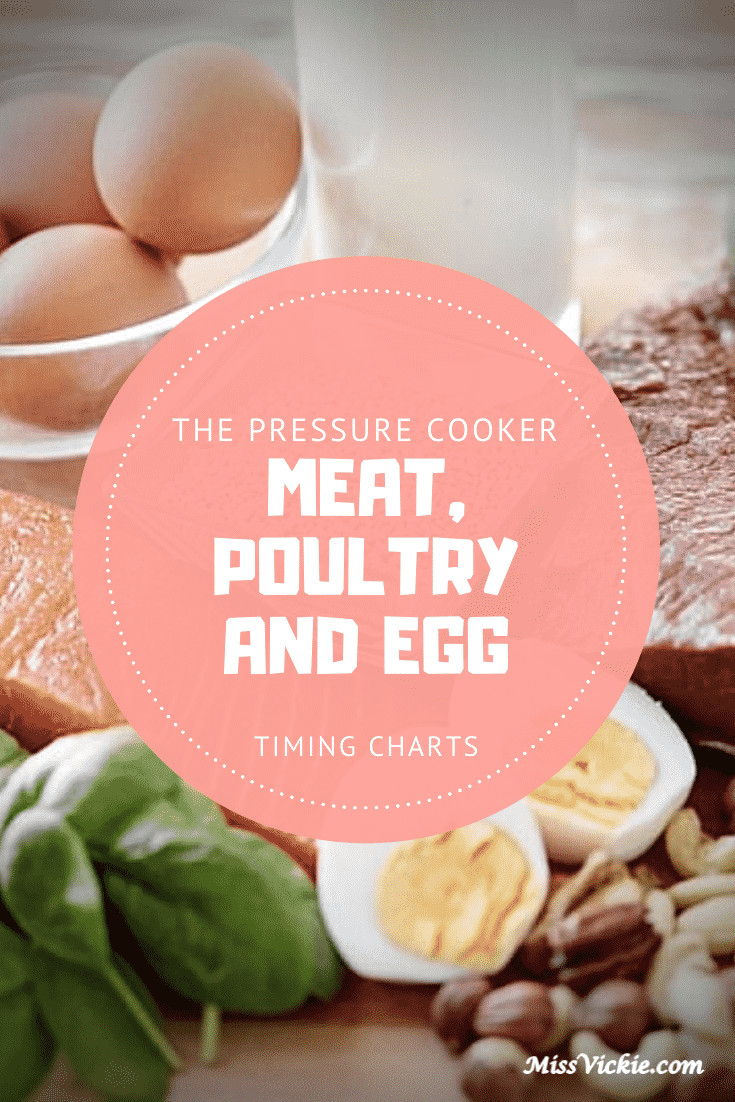