The Power Cooker Plus and the Power Pressure Cooker XL look identical, right down to the logo, the design of the pot, the interface, and just about everything else. However, there are significant differences between them, even if these are not so easy to spot. So let’s take a look at Power Cooker Plus vs Power Pressure Cooker XL to find out if there any advantages to buying one over the other.

The Power Cooker Plus is a multi-function pressure cooker that is only available in 8qt size – there does not appear to be any other pressure cookers in the range. The 8qt may slightly be too big for many people, but that said this pressure cooker is versatile and can be used for a variety of different cooking methods.

The interface looks easy to operate. There are preset functions for cooking; chicken/meat, steaming, beans/lentils, soups/stews, and rice, and you can use it as a slow cooker. There is also a preset for canning as well as a timer/delay and a keep warm function.

All this looks pretty good, but we do have concerns about using this as a canner. The FDA has warned against using electric pressure cookers for canning because there is some doubt as to whether they actually kill all bacteria. It is unlikely that the Power Cooker Plus has ever been tested for this purpose, so if you are looking for a pressure cooker to use for canning, your safest bet is to buy a stovetop model or canner in order to keep safe.

There is something about the Power Cooker Plus that looks a bit suspicious. It does not come with much product information, such as any safety details or manufacturing info, although it looks like many others on the market (and especially the power pressure XL) it does seem rather basic and almost as if it is a copy of reputable brands on the market rather than a quality appliance itself.

There is very little feedback from customers for the Power Cooker Plus either and that is not encouraging. The inner pot has a Teflon coating, which customers say comes off in cooking, and the general design and quality do not seem to be high. The Power Cooker Plus is all a bit cheap and plastic, and although it is not expensive at around $69 from Walmart, it can be pricy on Amazon, where it is currently on sale for $149.

The Power Pressure Cooker XL is available in a range of sizes; 6qt, 8qt, or 10qt, and you have a choice of colors as well, which are silver copper, blue or red. The silver model is the one that looks identical to the Power Cooker Plus model who has obviously ripped off the design and the appearance right down to the logo.

The Power Pressure Cooker XL logo is slightly different to that of Power Cooker Plus because these are two separate companies, but you really have to check it closely to see any difference. This confusion is obviously intentional, and although imitation is the sincerest form of flattery, this has obviously been done to mislead customers.

The Power Pressure Cooker XL is actually worth copying. This is a reasonably well-made appliance with plenty of advertised safety features and product information. The interface is easy to use, and you have plenty of preset functions, including chicken/meat, steaming, beans/lentils, soups/stews, and rice, and you can use it as a slow cooker. There is also a preset for canning as well as a timer/delay and a keep warm function. In fact, the interface is identical to that used by the Power Cooker Plus.

Although the Power Pressure Cooker XL range is undoubtedly better quality than the Power Cooker Plus, we do have some concerns. The canning function may be OK to use, but with the warnings issued by the FDA is not to use electric pressure cookers for canning, we can’t guarantee that this one is really going to be suitable. In addition, there are a few customer complaints about the non-stick coating of the inner pot becoming detached and flaking off in the food.

That said, customer opinion is overridingly positive. This pressure cooker has received over 3,250 customer reviews on Amazon, and 63% of customers gave this model a 5-star review. There is also a year’s manufacture warranty, so if you do have issues, you will be eligible for a replacement.

Price-wise, it is more expensive at $149 for the 6qt model than the Power Cooker Plus, which retails on Walmart for just $69. However, it seems that some Amazon sellers are attempting to mislead customers by selling Power Cooker Plus for the same price on Amazon as the Power Pressure Cooker XL. 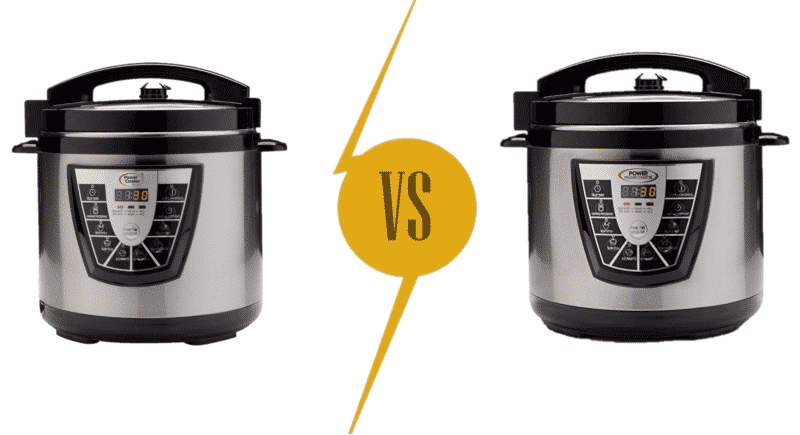