Those who enjoy all types of meat following a diet with zero restrictions will undoubtedly have tried countless tasty types of pork and ham. Pork is must-have meat to many, with a distinct flavor of its own.

The best choice between pork hock vs. ham hock is hard to determine if you’re not exactly sure which you need. We’ve got a comprehensive comparison of both types of meat coming up so that you always know which is the better option for whatever you may be making.

A pork hock and ham hock are extremely similar types of pork, but the seasoned cook will have very specific uses for each type of meat. Here is a breakdown of pork hock vs. ham hock, two commonly confused affordable cuts of pork. 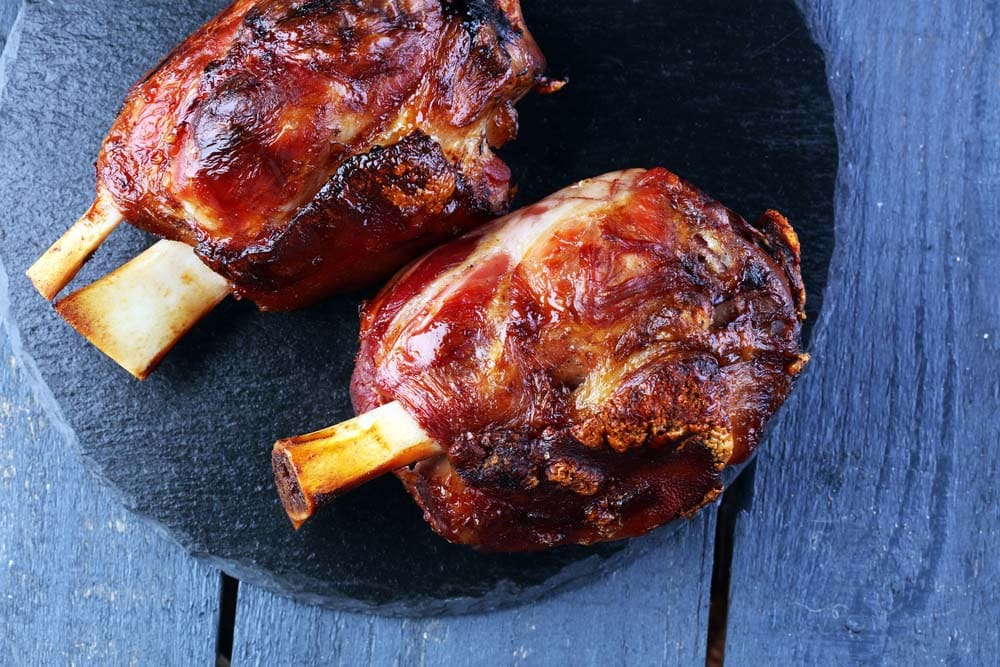 There are so many recipes that can’t go without a good ham hock. From pea and ham soup to eisbein, ham hocks are great. Let’s take a closer look at what makes this particular piece of pork so affordable and popular.

What is Ham Hock?

Ham hock is basically pork knuckle. It is the lower part of the back leg of pork. Ham is all pork, but not all pork is classified as ham. Ham is specifically the part of pork meat extracted from the back leg of the pig.

Ham is extracted from the joint amid the tibia/fibula and the metatarsals of the pig’s foot. It is basically where the pig’s leg was joined to the foot, but a section of meat that’s neither the ankle nor foot but rather the furthest end of the pig’s leg’s shank.

How To Make Ham Hock?

The most common method that people prefer for cooking a ham hock is boiling it. One of the main reasons that boiled ham hock comes out so tasty is because of the bone of the ham hock that calls for an extended cooking period.

To make a ham hock, you need some vegetables of your choice, a few cloves of garlic, and fresh or dried rosemary. Add everything to a pot, sprinkle over some vinegar and then cover with water to three-quarters full and bring to a boil.

Boil for one to two hours and then remove from the stock—either roast before serving for extra flavor or serve as is.

Is Ham Hock Good to Eat?

Ham hock is not as meaty as other dishes, but it is richer, which is why the taste is different from other pork meals. The fact that most of a ham hock consists of the bone means that it is packed with fiber, nutrients, and savory flavor.

What it lacks in meatiness, it gains in sweet, rich, slightly fatty pork flavor. Most use ham hock as a flavor component of soups and stews, but it can also be roasted and carved.

What Can I Use In Place Of A Ham Hock?

The best substitutes for ham hock are jowl bacon, bacon, pancetta, guanciale, or pork sausage, preferably one that’s smoked. Those who don’t mind the ears and trotters can opt for them instead when infusing flavor into soup or a stew.

Other than imparting excellent flavor, ham hocks are a great source of protein and carry roughly 16 grams per serving. They’re packed with fat and collagen while also delivering all nine essential amino acids.

The back section of a pig’s hock is slightly lower in conductive tissue, which means that the nutrient and density of ham hocks are ever so slightly lower than pork hocks, by raw definition. 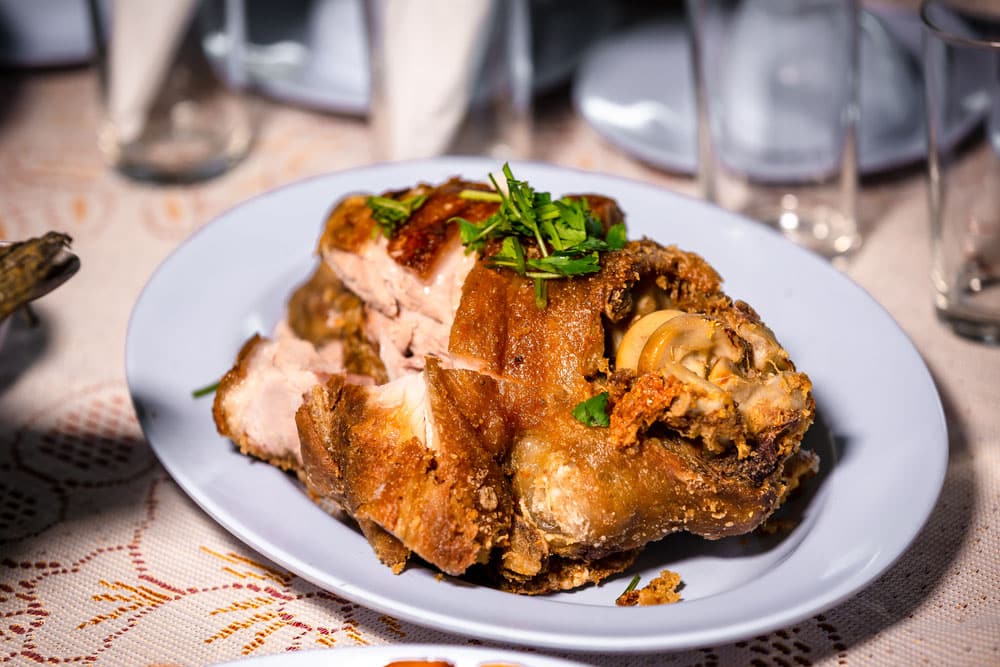 Certain areas of the world use pork hocks far more often than others. Regardless of whether you’re familiar with delicacies like Schweinshaxe or not, here’s everything you need to know about a pork hock coming up.

What Is Pork Hock?

A pork hock is rich in fats and is the hardest part of pork meat. A pork hock is a combination of fiber, connective tissues, and ligaments which makes it packed with flavor.

How To Make Pork Hock?

Pork hocks are prepared in the same manner detailed for ham hocks. Basically, a pork hock is boiled up in stock for up to two hours before being removed and set aside or served. When using pork hock for flavor only, consider cooking it longer.

Alternatively, opt to smoke your pork hock for one of the best ways to prepare this tasty ingredient.

Smoked pork hock is actually the preferred method of consumption, delivering the same range of nutrients and intensity of flavor just at a lower price, thanks to having a far longer shelf-life.

Pork hock tastes almost identical to ham hock. The difference is in the texture and toughness. Flesh from the front of a pig’s leg is tougher than flesh from the back, which also means that it has more inherent flavor if prepared correctly.

However, it’s also firmer, which is one of the reasons that smoking is a popular manner of preparation. Smoking followed by boiling guarantees that the flesh is tender while infusing as much flavor into your meal as possible.

Is Pork Hock Good To Eat?

Pork hocks are favored as ingredients in soups and stews and are seldom eaten alone. This being said, a slow-cooked pork hock that’s been oven-roasted can be carved and served with vegetables or other accompaniments.

Most cooks serving pork hock as a primary protein serve the meat alone carved away from the bone.

What Can I Use In Place Of A Pork Hock?

A ham hock is, of course, the best substitute for a pork hock. Otherwise, jowl bacon, bacon, pancetta, guanciale, and smoked pork sausage are all good options. In a pinch, any pork sausage will do. 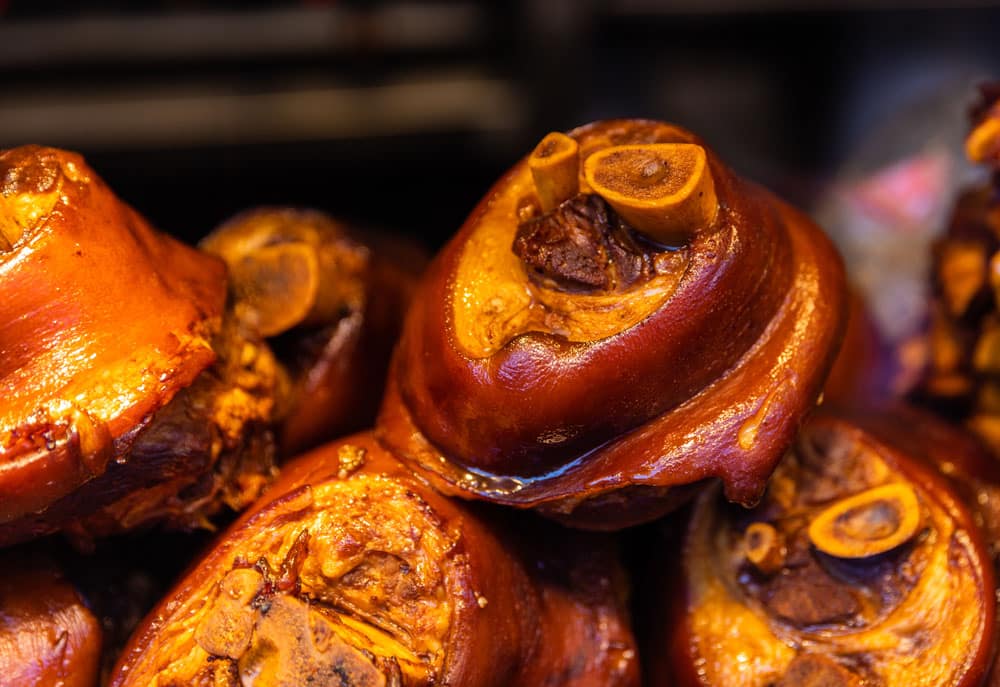 Pork hock is one of the most inexpensive parts of pork and is even cheaper than ham hocks. Few people choose pork hock as it includes the bone. However, the bone grants immense nutritive and flavor-enhancing benefits.

While a single serving carries equal protein, the collagen and nutrient concentration in pork hock is higher. Furthermore, the plasma held within the bones aids calcium growth, and the higher fiber count of pork hock stock improves the digestive system.

What Is The Difference Between A Pork Hock And Ham Hock?

Which Is Best Between Pork Hock Vs. Ham Hock?

Our detailed differentiation between pork and ham hock should cover everything you need to know about these two popular, flavorful ingredients. Most cooks consider ham hock to be the best as it is the meat of choice for eisbein.

However, if there’s anything you’re unsure about, then let us know in the comment section below. 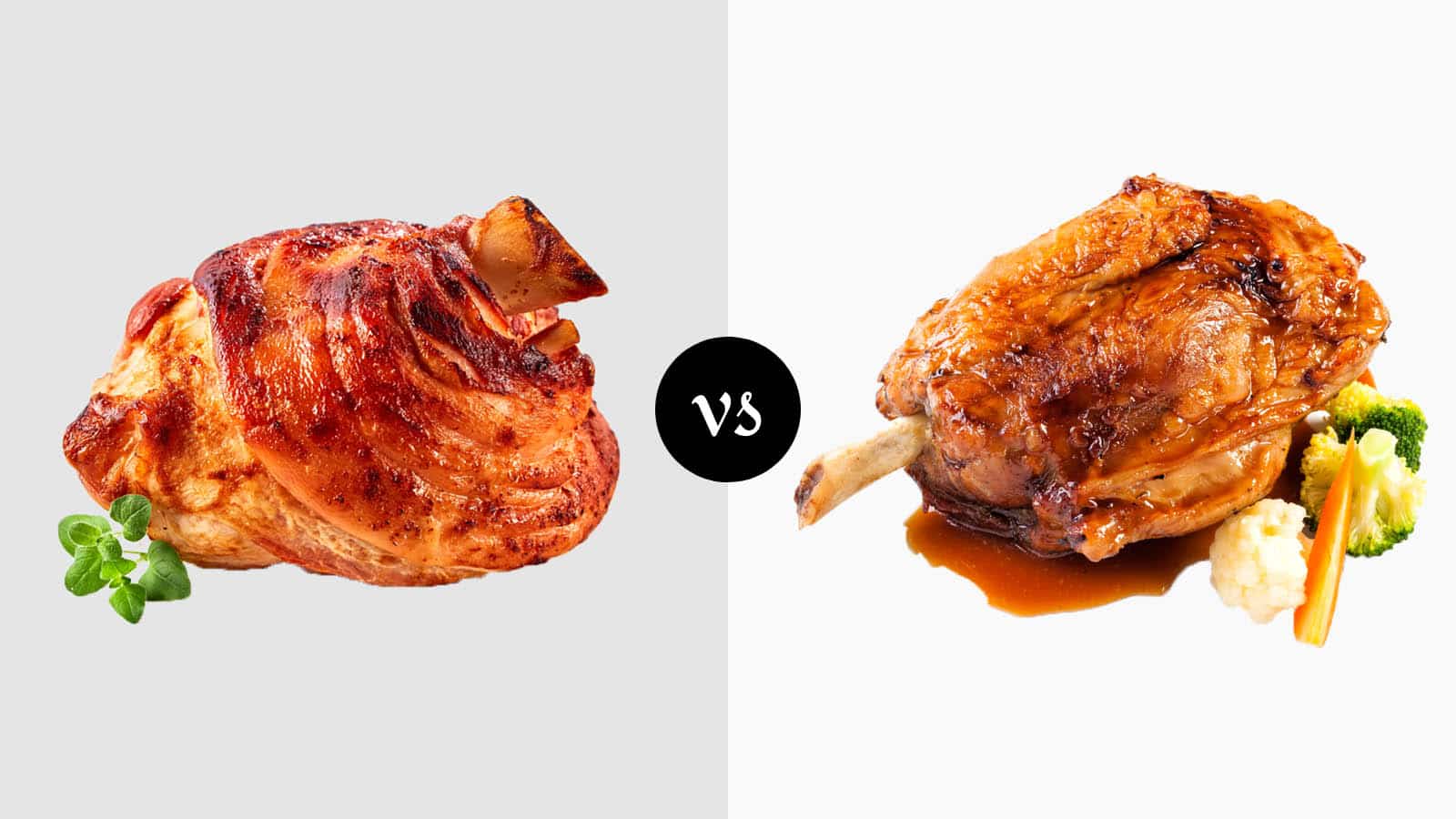