Pork chops are everyone’s favorite, but there are other delicious cuts of pig available too. Ham hock comes from the joint between a pig’s leg and foot – the ankle, in other words.

The joint tastes pretty delicious, and people who love bony meat adore the ham hock. The meat can also be stripped from the bone after cooking and used in various dishes.

However, the question, “Do you remove the skin from a ham hock?” is often asked by people who are unfamiliar with cooking the joint.

Most people buy a smoked ham hock from the supermarket, but if you bought the fresh ones and didn’t know what to do about the skin, this article will help you!

Do You Remove the Skin from a Ham Hock?

Ham hock makes an absolutely delicious, rich, and sustaining soup. It’s usually made with dried beans. Usually, the whole hock is simmered in the soup for several hours until everything is very soft.

The hock is then removed from the pot, and when cool enough to handle, the skin is removed. Discard the fat between the skin and the meat, and scrape the excess fat from under the skin.

Alternatively, once the soup is cooked, you can remove the skin, discard the fat, and put the piece of skin under the broiler until it is golden and crisp. Cut this skin into small strips (a pair of kitchen scissors helps) and serve it sprinkled on top of the soup.

If you aren’t making soup but are roasting the hock, you should definitely leave the skin and fat on while it’s in the oven. This is because the skin will provide an insulating fat layer that will keep the meat from drying out.

The fat will render out slowly as the hock roasts, leaving you with moist, caramelized meat inside and crisply cooked skin on the outside. To facilitate the process, sprinkle the skin with a little salt before cooking. Remember to roast the hock uncovered.

If you don’t want to eat the skin, you need first to cook the hock with the skin on, then remove the joint from the oven let it cool down. Use a sharp kitchen knife or shears for cutting off the skin. The skin will come off easily in one piece if the meat is properly cooked.

The skin of the ham hock is rich in collagen, which is said to promote younger-looking skin. It is said to decrease the depth of wrinkles and make the skin more elastic.

If you choose to remove it, it’s best to do so after cooking to preserve flavor and moisture. 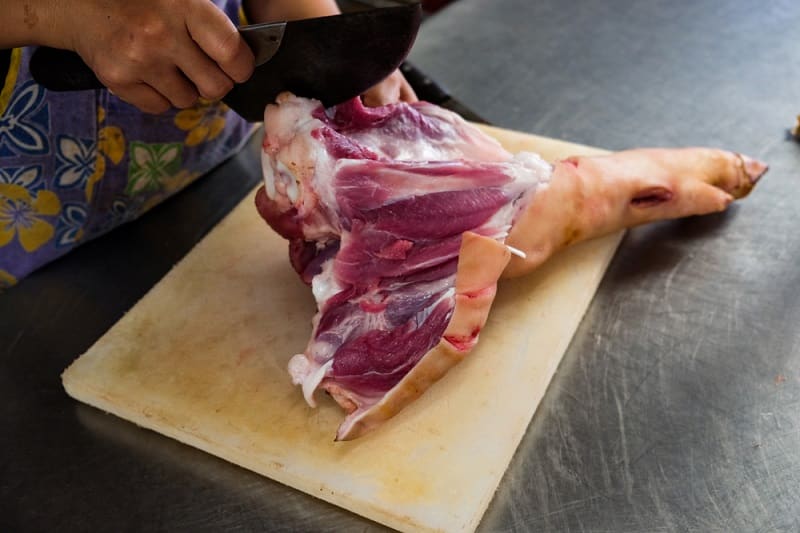