That’s why, after paying for one, you certainly don’t want to be worrying that the color is off. One popularly asked question on the forums is why some customers’ lobster is black inside. We’re here to answer this question with the help of the detailed guide given below.

Lobster Being Black Inside

What’s normal for a lobster?

Lobsters usually have a translucent light pinkish color to their flesh before they’ve been cooked and turn white after cooking. This is pleasant to look at, and more importantly, it makes for a great meal that is loved by many across the globe. The meat is sweet and firm.

Help! There’s black stuff in it!

If you see black beads amongst the white meat in the tail area of a female lobster, this is undeveloped eggs, or roe. Some people call it “coral” due to its red color once cooked.

Once cooked, they should turn red so if you’ve already cooked your lobster and they’re still black with a jelly-like consistency, it means that the meat needs to be cooked a little longer. Roe are edible and are considered a delicacy.

The other black stuff inside a lobster tail will come in a line, or “vein”. It runs along the middle of the tail segment and contains the lobster’s feces. This shouldn’t be eaten.

Remove it by grabbing the vein where the tail was attached to the body and gently pulling it to remove it. Some fishmongers will remove this for you before selling the lobsters but others won’t. It should be taken out before you cook the lobster.

What if the flesh is black?

There’s another reason for your lobster having a blackish tinge to the flesh. When you cook lobster but fail to do so at the right temperature for the right amount of time, the enzyme phenoloxidase inside them is activated.

This results in the release of black pigment – melanin –, which turns the flesh of the lobster blackish. There is only one way to avoid this from happening, which is to make sure that you prepare the lobsters quickly under high heat.

There are usually no health risks (unless your lobster has gone off, in which case it will smell bad) and the black color does not affect the taste. When preparing lobster for cooking, keep an eye out for any blackish discolorations on the flesh.

These are bruises and show that the lobster was not correctly handled during processing. You can still eat it; just cut these parts away with a sharp knife and discard them before cooking.

Small black beads inside your lobster are immature eggs and are nothing to worry about except that they indicate that the meat needs further cooking. When the meat is correctly cooked, it will turn white and the roe will turn red.

A black line or vein through the center of the lobster tail is also normal. This should be removed before cooking though. We hope you enjoy your lobster dinner! 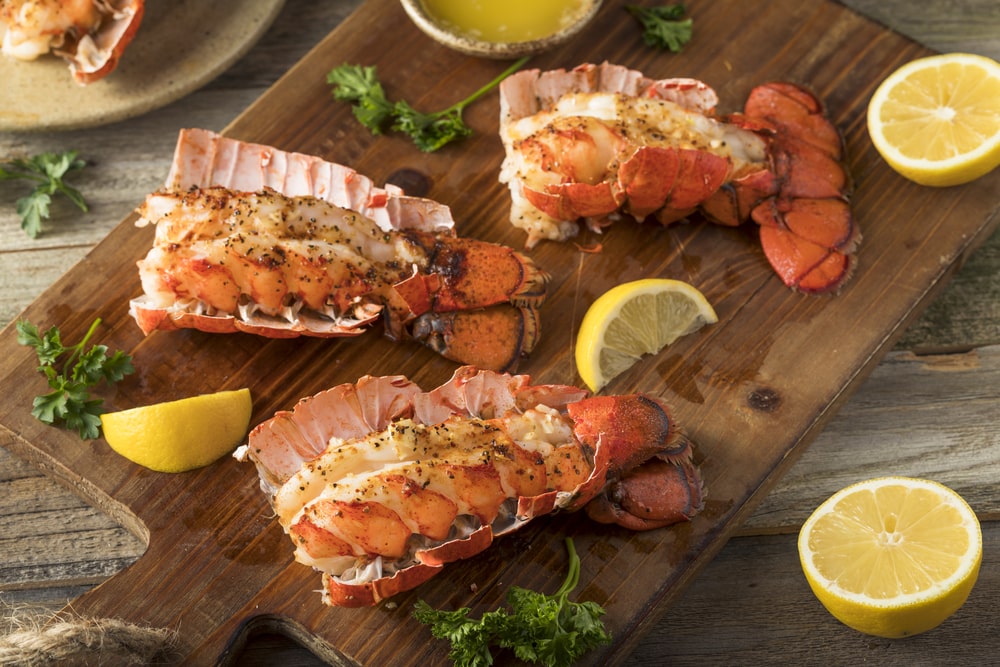