The updated Instant Pot Viva has been a big hit, but no one can deny the Instant Pot Duo’s reliability and sheer money-saving value. Both models are popular, but the best digital pressure cooker depends on how you plan to use it.

We’ve got a complete comparison of the Instant Pot Viva Vs. Duo so that you know precisely which model has the features and functionality that you need.

There are no better-known electric pressure cookers than the outstanding Instant Pot range.

Each Instant Pot model has set the standard for pressure cookers in its class and volume, and out of the many ever-popular options, the Instant Pot Viva and Duo stand out as favored the most. Let’s see how they compare.

The Instant Pot Viva 9-in-1 Digital Pressure cooker is a leading seller and a slight improvement over predecessors in the range. With two electric features and a vastly upgraded display, it’ll be the go-to choice for many new electric pressure cooker owners.

Here’s a breakdown of all the features, functions, and how the Viva compares to the Duo.

Unlike the Instant Pot Duo, which is only available in stainless steel and black, the Viva has a wide color range, including blue, red, purple, copper, gray, black, eggplant, and cinnamon.

You can also get the original stainless steel finish which is fingerprint-resistant like the rest of the range, easy to clean, and highly durable. The same longevity and scratch/touch resistance is exhibited across all colors.

The Instant Pot Viva and Instant Pot Duo may at first look similar, but closer inspection reveals a unit with finer attention to detail and slightly better engineering.

From the enlarged LCD with blue-letter display to the well-rounded aesthetic that alters the framing of the controls ever-so-slightly, the entire unit is more elegant with better style, especially when opting for one of the colored Instant Pots instead of the brushed standard stainless steel. 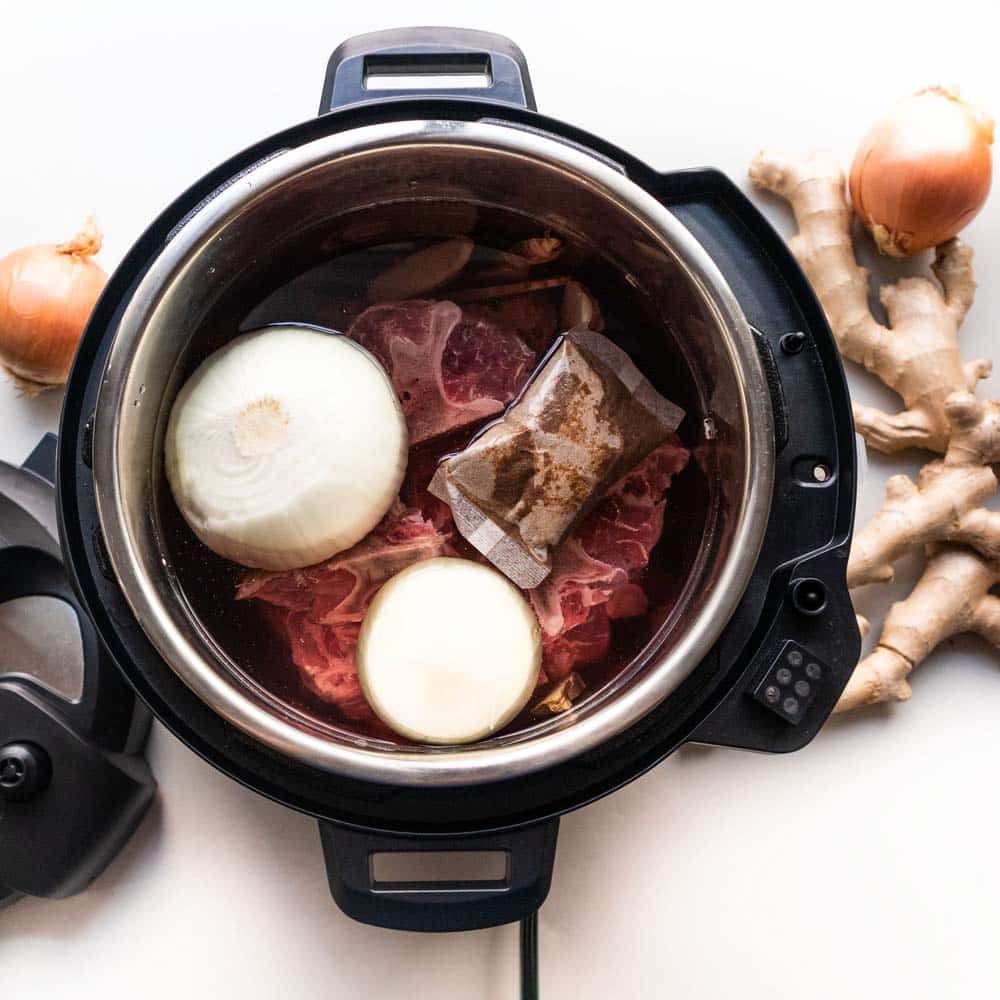 All Instant Pots are fingerprint resistant, scratch-resistant, and unlikely to peel or fade even after an extended period of time. Stainless steel composition comprises the whole of each unit, other than the feet, handles, and one-touch controls.

The Instant Pot Viva is available in two sizes, namely the 6 quarts and the 8 quarts.

Just like the Duo, you can adjust any of the presets while they are underway.

Pressure cooking for four hours at a time is the maximum duration, just like the Duo, and the rice cooker also adjusts automatically. Sous vide cooking couldn’t be easier – simply add water and your food and let the unit program the duration and temperature. 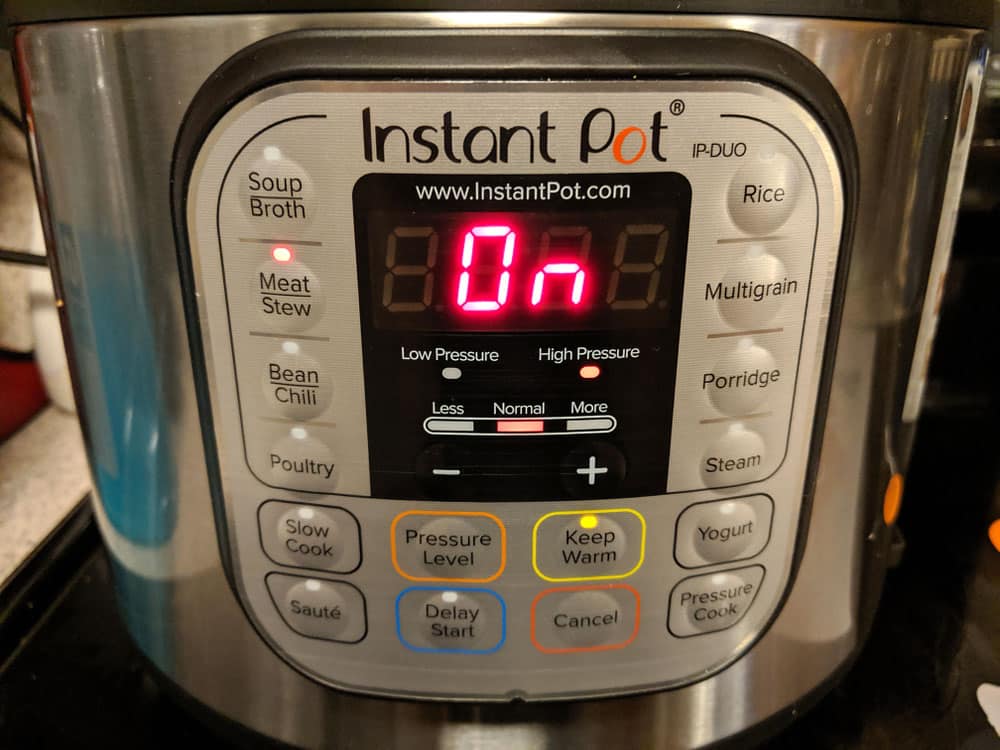 Sterilize mode generates enough steam to sterilize jars or contains small enough to fit within the inner pot, which is perfect for preserves and canning.

Even though the Instant Pot Duo and Viva utilize equal wattage relative to their specific sizes, the Viva features slightly better technology due to being a newer unit which means that it pressure cooks slightly faster than the standard 70% efficiency offered by Instant Pots.

There are several notable technological improvements. The lid of the Viva has been upgraded to an easy self-seal, which automatically seals the pot for pressure cooking.

The quick steam release button is easier to use as well and has been vastly updated from earlier Instant Pot models, which means that it works faster and is safer at the same time. Just like the Duo, the entire unit is made from food grade 304 (18/18) stainless steel.

Instead of ten safety features guaranteeing that your pressure cooker is suitable for all users, the Viva offers eleven, making it even more secure.

The only true upgrades that you’re getting are a clearer display thanks to the larger LCD and blue text and the two extra cooking modes. You probably don’t need the Viva if you don’t Sous Vide and rarely sterilize jars for canning.

Instant Pot Viva is much more expensive than the Duo. Prices vary depending on the retailer but are generally around $158.99 for the eight-quart size. 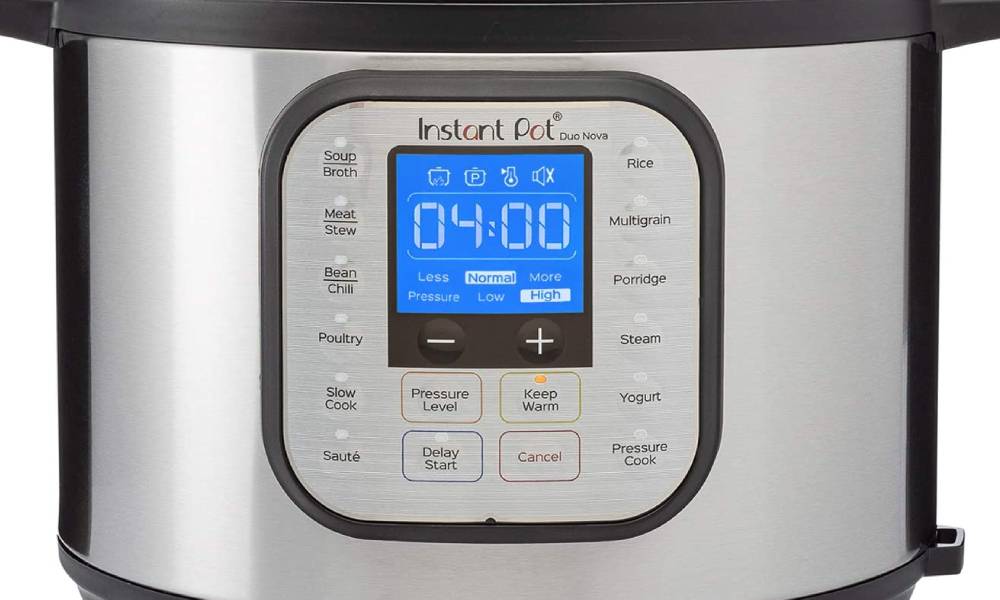 The Instant Pot Duo is the company’s most popular model. There are hundreds of thousands of satisfied customers – over 53,000 on Amazon alone, and the general opinion is that the Instant Pot Duo is a great appliance that is easy to use and offers excellent versatility.

The control panel and information display are centered on the front of the stylish pot, showing all timing in clear red digits while offering quick-touch access to all the one-touch controls.

The lid, feed, and handles are pitch black and durable enough to last just as long as the food-grade stainless steel. Each Instant Pot is likely to keep up its elegant appearance for years thanks to being fingerprint resistant, extremely rugged, and easy to clean.

From the moment that you lay your eyes on the Instant Pot Duo, the quality of manufacturing is clear. Firstly, the entire unit and all components involved are composed of food-grade 304 (18/18) stainless steel.

Each Instant Pot’s polished, shiny exterior coating is free from harmful chemicals and is both scratch and peel resistant.

The Instant Pot Duo is available in three sizes, namely the 3-quart, 6-quart, and 8-quart capacity.

There are no less than fourteen Smart Programs provided.

The Instant Pot Duo functions as a pressure cooker, steamer, slow cooker, rice cooker, yogurt maker, saute pan, and food warmer. When sauteing, you can pick from three different heat modes allowing you to either sear, brown, or simmer.

When pressure cooking, one can pressure cook for a total of four consecutive hours at a time, with low and high-pressure pressure cooking offered. The rice cooker automatically adjusts the timer according to the quantity of rice being cooked. 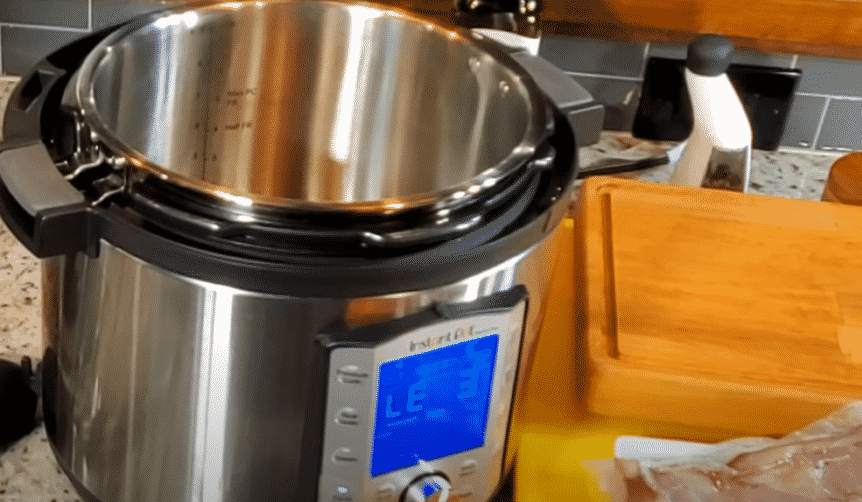 In addition to the fourteen built-in Smart Programs and the seven different cooking modes, the Instant Pot Duo also has a quiet mode and an ‘Auto Keep Warm’ feature that automatically adjusts to the optimal temperature to warm food evenly and without burning/hotspots.

Cooks can also delay the start of any cooking program by up to 24-hours, which makes timing meals after long shifts easy. There are ten built-in safety mechanisms relying on proprietary technology to ensure that the pot cannot be opened in a dangerous situation.

Auto shutoff and pressure protection are covered in several ways. Finally, Instant Pot has even been thoughtful enough to design the lid holder to accommodate both left and right-handed users comfortably.

There have been a small number of complaints about reliability, but incidents are scattered and far and few between, so this shouldn’t be a concern. After all, electric pressure cookers from Instant Pot all come with a well-honored guarantee.

The only possible pitfall is that getting hold of customer service can be tiring. Support desks are less efficient at responding to customers than most customers would like. However, sticking it out will get results. 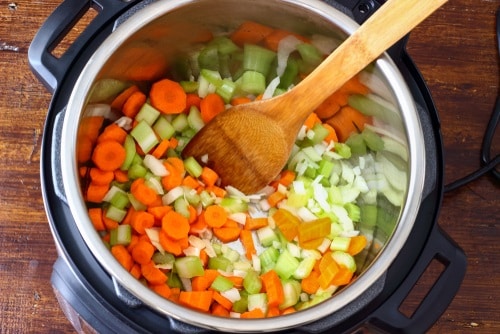 One thing we love about the Instant Pot Duo is that it is such a great deal! The 6-quart multi-cooker retails on Amazon for $79.00.

For many people, this is a big investment into a kitchen appliance but is a far better price than a whopping $158.00 when all you’re getting is two additional features.

What Is The Difference Between Instant Pot Viva And Duo?

The main difference between the Instant Pot Viva and Duo is that the Viva is available in a range of colors instead of plain stainless steel and offers two extra functions, ‘Sous Vide’ and ‘Sterilize,’ while performing the same seven other functions that the Duo does, namely, pressure cooker, steamer, slow cooker, rice cooker, yogurt maker, saute pan and a food warmer.

Which Is Best Between Instant Pot Viva Vs. Duo? 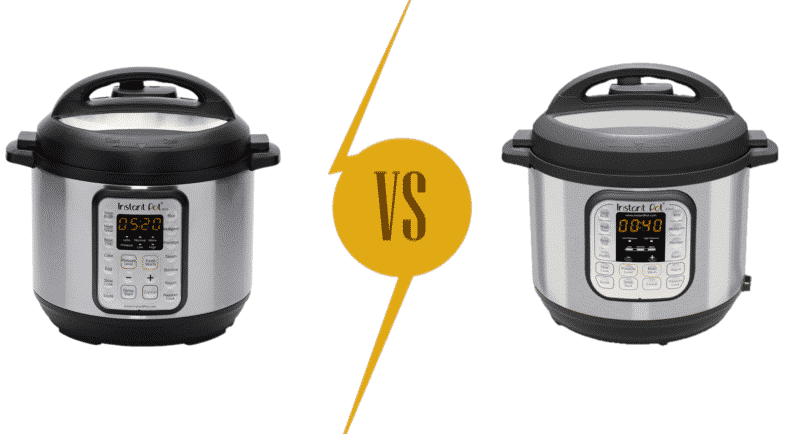 We love the Instant Pot duo, but this doesn’t mean that the Viva shouldn’t be a consideration for anyone who likes to Sous Vide or can food frequently. The Duo’s functionality offers just about everything that a regular family could need at a price that everyone can afford.

The Viva’s bump in cost disqualifies it from most users who don’t specifically need the two extra features. However, style-conscious cooks may have no other choice other than to go for the Viva when trying to match their new appliance to the color scheme of their kitchen.

Keep in mind it can cost you up to double to acquire the extra functionality and attractive look, so weigh your options carefully. 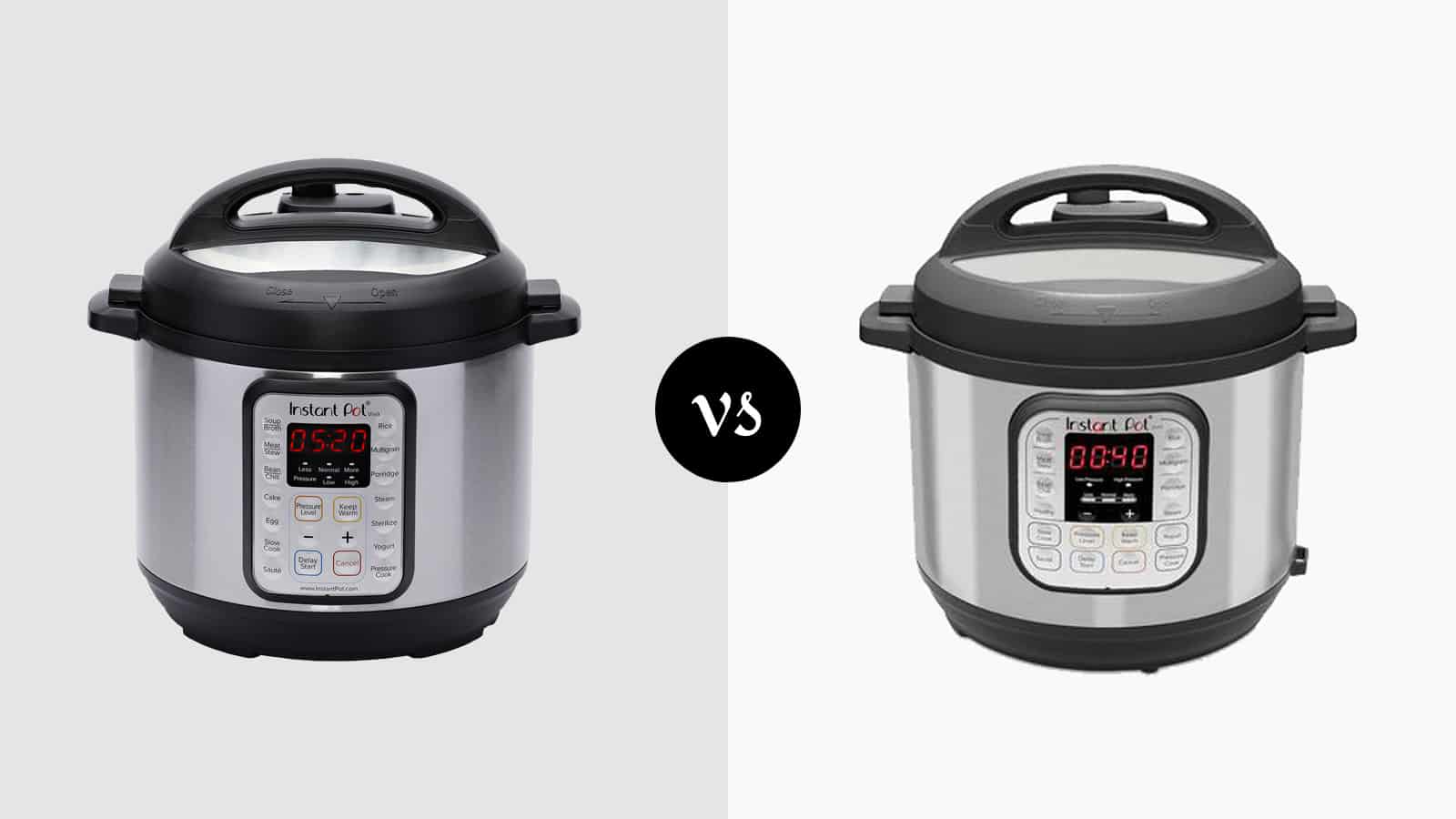