We can already feel the coldness in the air, which means winters are blooming in their full glory. So, these winters call for the juicy and tender steak, but some people leave out the steak for their long cooking times and extensive recipe. This calls for the pan-cooking method for the steak, which means you sear it on the pan a bit and slip the pan into the hot oven for continual cooking. Well, the prime reason that people look for this method is that they don’t have the cast iron skillet. So, if you are considering how to cook the ribeye steak in an oven without a cast-iron skillet, we have the answers!

How To Cook Ribeye Steak In Oven Without A Cast Iron Skillet?

This recipe will take around ten minutes for preparation and about half an hour for the total cooking time. So, in this section, we have outlined the recipe (yes, even if you don’t have the cast iron skillet!)

In addition, you need to ensure that steak is not wet because wet steak into the pan of hot oil will not settle perfectly. You must pat dry the steak piece because the water layer will adversely impact the coloring and browning of the exterior. So, once you dry up the steak, add the seasoning, and dip steaks into the pan for an even cooking outcome.

The ribeye steak is nothing without a brown and crispy exterior, which speaks about the importance of salt. First of all, the salt will accentuate the flavor, and secondly, it will lead to the caramelization. When the caramelization is done properly, the forming of a crispy crust will be easier. With this being said, you must pat-dry the steak and apply a layer of oil because it develops a seal.

After adding the oil layer, don’t forget to season it up with salt and pepper before adding it to the pan. In addition, when you are using the pan instead of cast iron skillet, it is suggested to ensure the higher temperature settings. This is because high temperature promises proper caramelization, color, and searing. Also, the hot pan will take too long to develop the crust.

With pans, you need to sear the steak for around two minutes and slide the pan into the oven. There are some exemptions to using the pan. This is because the pan can be used only when you have thin cuts. That’s to say because thick cuts will come out with dry edges and undercooked form. So, stay careful about cooking ribeye steak without the cast iron skillet! 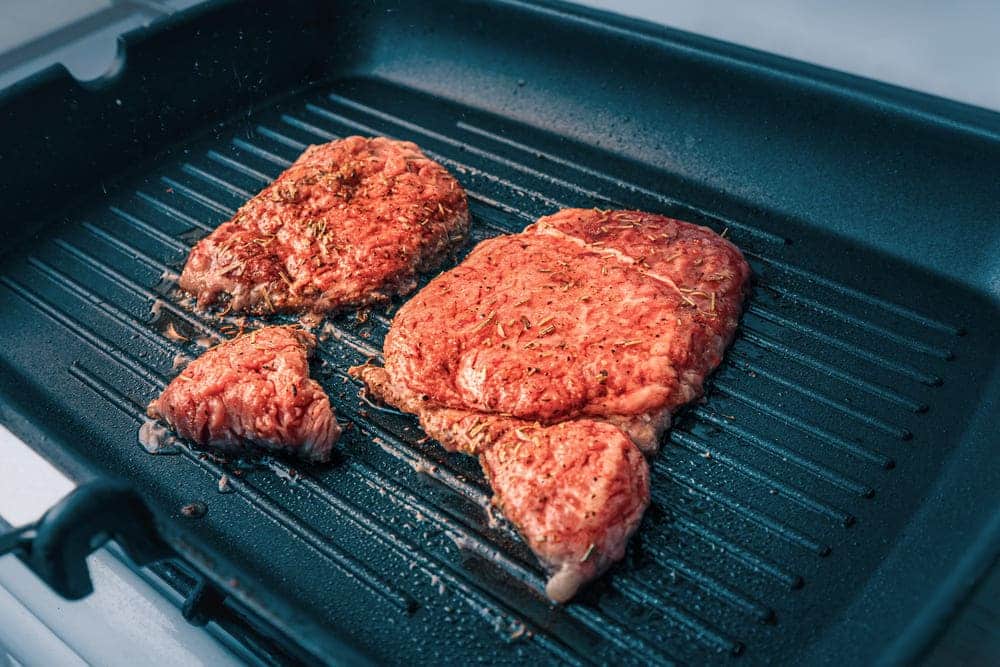