When it comes down to choosing the right steak cut, people are very particular. This is because different steak cuts impact the moisture and flavor.

If you are a beef eater and love eating steak, then knowing the difference between tomahawk steak vs. ribeye steak is essential. We’ve got all the information you need about these two tasty steaks coming up.

There’ll be no confusion left after reading our comprehensive comparison of tomahawk steak vs. ribeye steak.

We’re covering all the defining differences between these two very similar steaks.

It’s safe to say that a tomahawk steak is one of the best steaks you can try. If you’re a fan of steak, then a tomahawk is a must, even though it typically sells for far more than a standard ribeye.

Let’s take a closer look at this tasty high-end option.

A tomahawk steak is a ribeye that’s been cut while leaving a minimum of five inches of the rib bone intact. 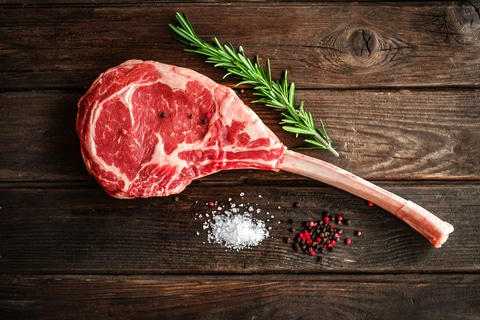 This steak with a long bone that’s French trimmed to give it a handle-like shape takes its name from its appearance.

After the bone is trimmed, it looks exactly like a native North American tomahawk axe.

As the name implies, a tomahawk steak is cut and Frenched to resemble a hand-axe with a long handle. It is essentially a rustic ribeye steak with the rib bone attached. 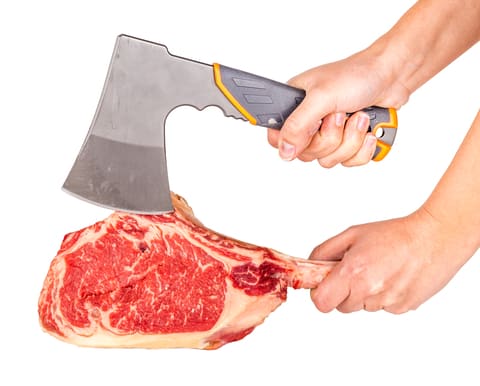 You’ll find tomahawk steaks sold by many names. It is also known as bone-in ribeye, cote du boeuf, and a tomahawk chop.

It’s also at times referred to as a rib steak, bone-in rib steak, and a cowboy steak.

As an oversized standard ribeye due to the bone, a tomahawk steak is extracted from the rib section of the cow, conventionally between the sixth and twelfth rib, which is the center area known as the “eye.”

The precise name for the region where a tomahawk steak is cut from is the longissimus dorsi.

Tomahawk steak can be cut out from wagyu, such as akage, kuroge, and mukake.

In addition, it can be cut from Angus beef which is one of the world’s most popular cattle. These cuts come with massive intramuscular fats, granting immense flavors.

Expect to find tomahawk steaks ranging between two and three pounds, with 40 and 48-ounce steaks being the most common. 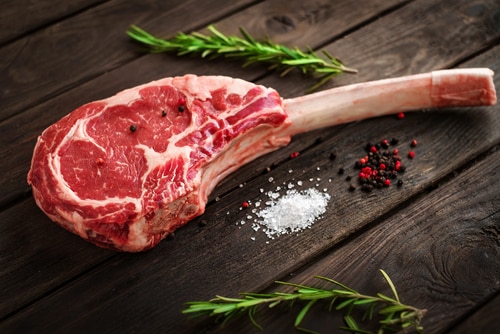 Both tomahawk steaks with the bone in and regular boneless ribeye have a nearly identical flavor due to being the exact same cut of meat.

The only difference is that the slow cooking process typically makes a tomahawk steak more succulent and juicy than its boneless counterpart.

Expect strong meatiness with great depth of flavor and a buttery quality throughout. 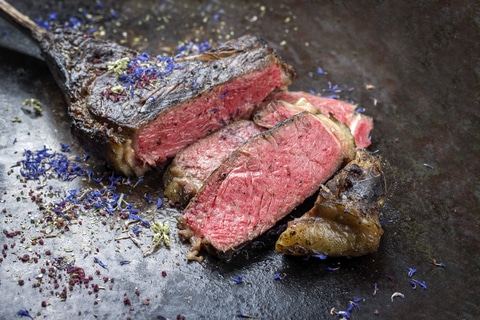 Tomahawk steaks have excellent marbling and are trimmed of most of the outside fat.

A tomahawk steak is more challenging to cook to perfection than a boneless ribeye.

The presence of the large rib bone means that a reverse sear is generally the easiest and safest way to cook a tomahawk.

Additionally, one needs to take to ensure that the entire steak cooks evenly despite not having a uniform thickness all the way through.

As one of the most stunning steaks available, one pays a hefty premium for a tomahawk steak. It can be expensive, but the flavor and dining experience are well worth it.

Tomahawk steaks sell for an average of $37 to $50 per pound. While a rare occurrence, certain butcheries will be kind enough to substitute the estimated weight of the bone when purchasing a tomahawk steak. 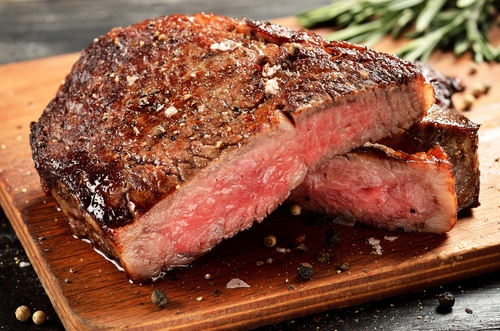 One of the finest choices you can make when shopping for a tasty steak is ribeye. It’s also one of the highest-rated steaks across the board.

Affordable and generally always available, you can’t go wrong with this excellent cut. Let’s take a closer look at what makes ribeye steak so popular.

Ribeye steaks are a large cut with flesh from the central eye of the cow and exhibit a fine grain that becomes less tightly packed and fattier toward the outer sections.

Various sized pockets of fat are found in between all the flesh. 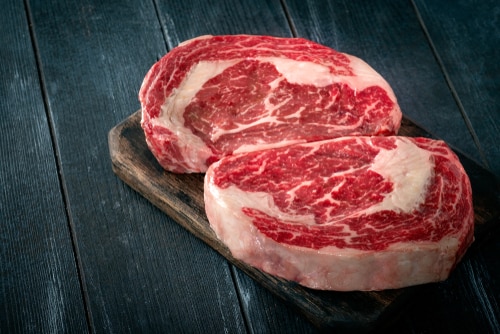 Ribeyes are large steaks with a great deal of fat marbling.

You’ll find regions of fat throughout the entire cut, granting a loose grain towards the middle with a grain that’s less tight and fattier towards the edges.

There are several names for ribeye steak that are commonly used. Look for Delmonico steak, scotch filet, cowboy steak, or a deboned tomahawk.

It’s also sometimes sold as a “Beauty Steak” due to the stunning appearance of this cut. 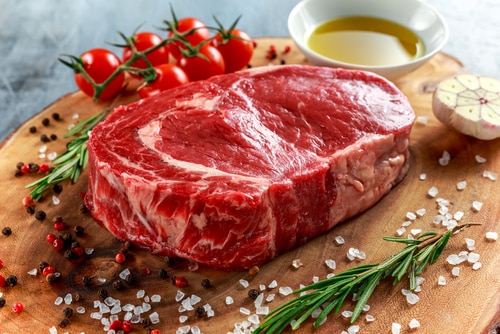 A ribeye steak is a beef steak that’s cut from the rib section. It is cut from the sixth rib to the twelfth rib, so there are different variations available.

For the most part, it is a cut from the longissimus dorsi muscle, which also includes spinalis and complexus muscles.,This section is also called the primal rib.

Unlike a tomahawk steak, ribeyes are boneless. The cut does not typically include the rib bone, but in regions outside of the US like New Zealand and Australia, ribeye can be served with a piece of bone attached.

The majority of ribeye steaks are between ¾-inches and a 1-inch thick and weigh anything between 8 ounces and 2 pounds.

Ribeye steak is full of flavor with the ideal degree of tenderness since it’s cut out from the upper rib cage, which is an area that’s not worked as hard as other muscles.

The considerable amount of intramuscular fat and a healthy degree of marbling ensures that ribeye steaks are juicy and tender without excessive chewiness.

Ribeye is a fairly easy steak to cook. It’s far easier to cook boneless ribeye than it is to cook a tomahawk steak or any other variety with the bone in.

A ribeye is best cooked by giving it a good sear on both sides and then turning every few minutes until a golden crust forms and the desired rareness is reached.

Ribeye steaks average between $8 and $15 per pound. Even though a ribeye and tomahawk are technically cut from the same place, ribeyes are far more affordable.

How Much Does A Tomahawk Steak Bone Weigh 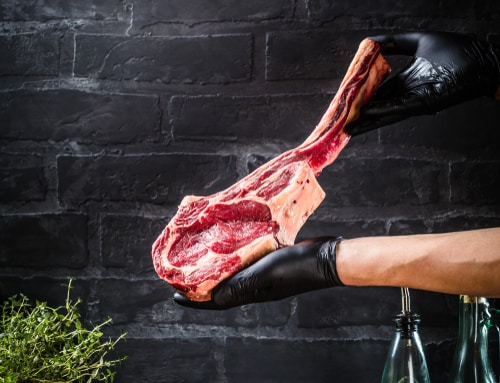 Despite adding extra weight and no meat, the bone does ensure a cut of steak that stays juicer than other alternatives when cooked properly.

We recommend brushing your steak with oil to give it a better crust regardless of which type you’re cooking.

Ultimately, one can’t truly pick a winner between tomahawk steak vs. ribeye as it comes down to your personal preferences. Some demand the flavor granted by leaving the bone in, whereas others prefer the ease of eating it boneless. 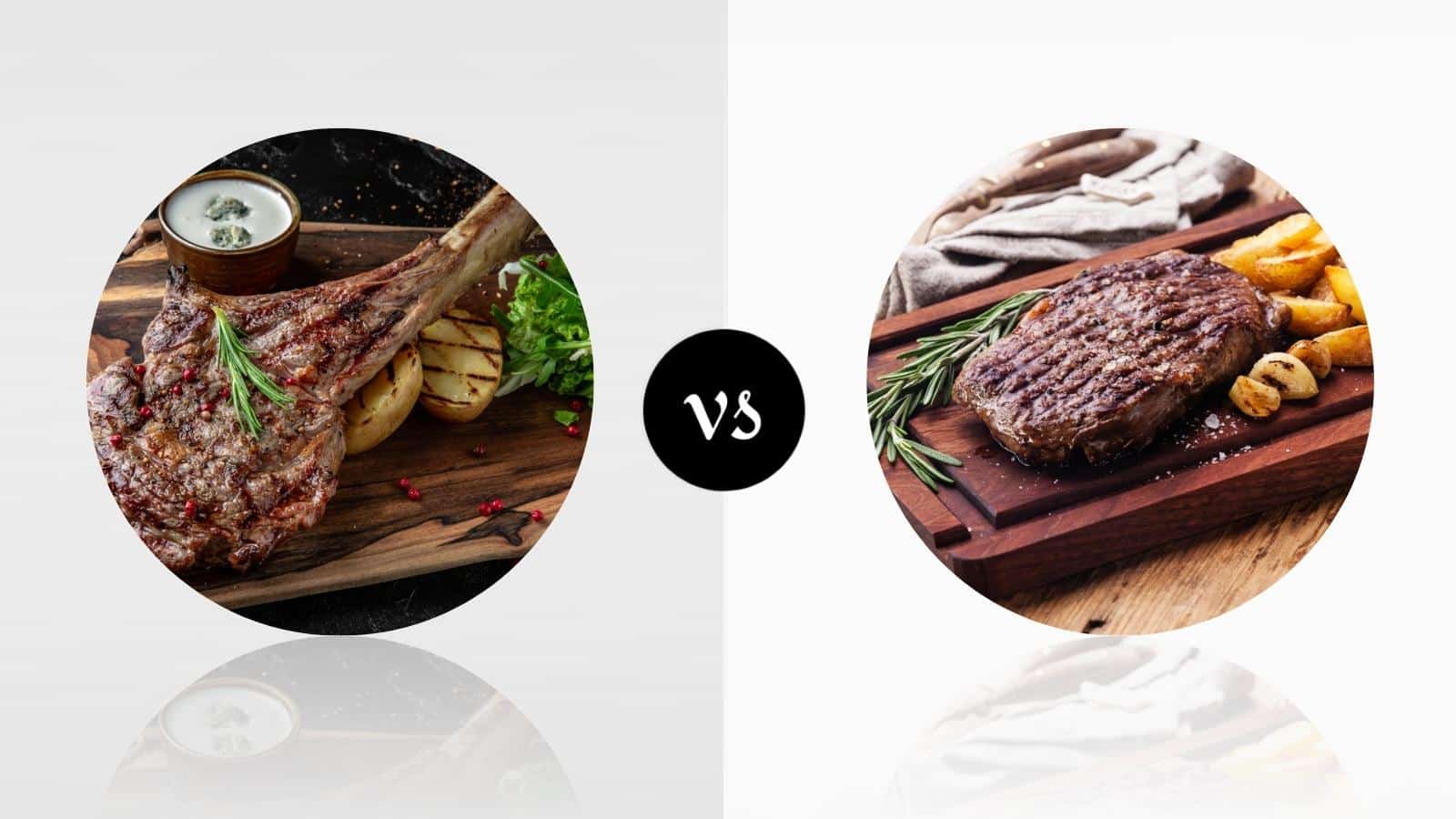