Seafood is both healthy and delicious at the same time. All around the world, people turn to seafood dishes to spice up their gatherings.

Fish, prawns, and mussels have been long-running favorites thanks to delivering an unmistakably fresh taste that’s both savory and salty. There’s nothing quite like good seafood.

Green and black mussels are closely related, leading to several disagreements and much confusion regarding their differences.

Here, we’ll take you through a look at the difference between green and black mussels, but let’s first take a look at what exactly a mussel is.

Mussels are mollusks that live in both freshwater and seawater in a bivalve shell. As they’re scientifically known, Bivalve mollusks are one of the world’s most eaten seafood and a highly balanced source of nutrition.

They’re a fantastic source of lean protein, and they’re packed with iron, zinc, and other micronutrients and vitamins.

Just a third of an ounce covers a third of an adult’s daily iron intake requirement, and they’re high in vitamin B12, which makes them essential to the production of healthy, new red blood cells.

Combine the high nutrition and protein with just how low they are in calories and their zero fat content, and you’ve got a food type that’s great for those looking to shed a few pounds.

Is It Okay To Eat Mussels?

Mussels are completely safe to eat when cooked. One has to remember to cook mussels properly because they’re filter feeders.

As they filter plankton out of the water as it passes through them, they also sometimes draw out bacteria and other toxins.

Wild-caught mussels are bottom feeders, leaving them susceptible to being exposed to a lot of waste.

However, once they’re cooked, all harmful substances are destroyed by the cooking process’s intense heat.

Farmed mussels are suspended off the ocean floor and bred in controlled waters, which makes them less likely to have any toxins or waste products present in the first place.

Now, it’s time to discuss the various colored mussels and their differences.

What Are Green Mussels?

Green mussels are native to New Zealand and exported to other parts of the world, although certain countries like India have adopted open water farming.

Mussels with green shells are farmed mussels exclusively and subject to strict regulation. Water quality is of the utmost importance due to how they feed, and all shellfish-producing waters belonging to New Zealand are carefully monitored.

They’re slightly larger than other families of mussels. Even though green mussels are bigger and meatier, they’ve got a slightly less intense taste and a lighter flavor than black mussels.

What Are Black Mussels?

Black mussels are identical to blue mussels. They’re just a darker shade which gives them a black appearance. Ropes are suspended into sheltered, protected areas where the mussels then attach, feed, and grow.

Several countries have significant mussel aquaculture operations, including the U.S., Canada, China, and South Africa. Mussels with a black shell are easy to chew and strong in both bodies of flavor and intensity.

Choromytilus meridionalis, or black mussels, are far more common than green mussels due to being farmed from nature.

An Overview of the Green and Black Mussels

One of the most heated debates and most controversial points of confusion tastes better, green or black mussels? Your personal taste and the flavor profile of your recipe will determine which is the best.

Some recipes call for the mild taste of green mussels, and cases like this black won’t work right. The same goes the other way round, vice versa.

With this cleared up, let’s take a closer look at the specific differences between the two.

Massive, plump green mussels are famous for being farmed in pristine waters and will surprise anyone who hasn’t had the opportunity to try them before.

They’re a unique, healthy fusion of ocean flavors with subtle but distinct differences over black mussels.

Mussel farming in New Zealand first began in the 1960s, but Green Lipped Mussels had been a part of the native Maori people’s diet for hundreds of years.

Farmed green mussels can grow up to 15 cm in length, or 6-inches, but the most common size harvested for market sale is 3 1/2 to 4 inches.

Green mussels extracted from the Pacific Rim can double the size of the largest black mussels, reaching over 20 cm in length.

They lack the seafood sharpness that makes black mussels too strong for some people. Fishiness is low, and oiliness is barely present, leaving one with a fresh, salty taste that’s nothing like oysters, scallops, or clams.

They’ve got a taste of their own that’s far more neutral than most expect.

Green mussels are firmer and meatier than their counterparts. When cooked properly, green mussels will become tender without falling apart. Expect a consistency that’s softer than a clam and less chewy than an oyster.

The green variety is the most tender and plumpest out of all clams and a must-try for anyone who dislikes the a-typical mushiness of black mussels and other seafood.

Although not as expensive as seafood like tuna, green mussels are rather pricey. They’re more expensive than black mussels due to their farming exclusivity.

Furthermore, regions that import have further price hikes due to low supply and high demand.

As a product native to New Zealand, finding them anywhere else means that they’re imported.

Availability in certain areas of the world can be deficient, making green mussels far scarcer than black mussels.

They’re the most common variety found in stores and restaurants worldwide and have a strong taste that immediately hits the palate, releasing a burst of ocean flavors.

Black mussels are farmed as several different species from across the world.

South Africa has one of the largest black mussel farming industries globally, farming Choromytilus meridionalis native to the country’s waters.

Bulgaria has the largest black mussel farm in Europe, farming Mytilus trossulus, which is native to the North Atlantic and North Pacific and the Arctic oceans.

Mytilus galloprovincialis is another mussel farmed in the Mediterranean, Japan, North Korea, and Russia.

Market size for black mussels ranges between 2 and 3.15 inches at a maximum in most parts of the world.

Black mussels are tangier, saltier, and stronger overall than green mussels. The taste between the two is the same, just more intense.

All mussels have a mild ocean flavor and natural saltiness, and black mussels have this taste coming through bolder, with more body and a slight lingering fishiness.

Just as is the case with other varieties, you can’t compare the flavor to other seafood.

Cooked black mussels become so tender that they chew away to mush quickly and easily. The smaller flesh of a black mussel melts far quicker than green mussels when chewed.

Black mussels remain firm but have far softer flesh than their counterparts.

Fresh and frozen black mussels are available around the world.

Green Mussels vs Black Mussels: Which One Is The Best?

However, one can’t deny how well black mussels work in countless types of cuisine worldwide.

We recommend that you resort to black mussels most often to fill your nutritional needs and buy green ones when you feel like splashing out, treating yourself, or are in the mood for something lighter. 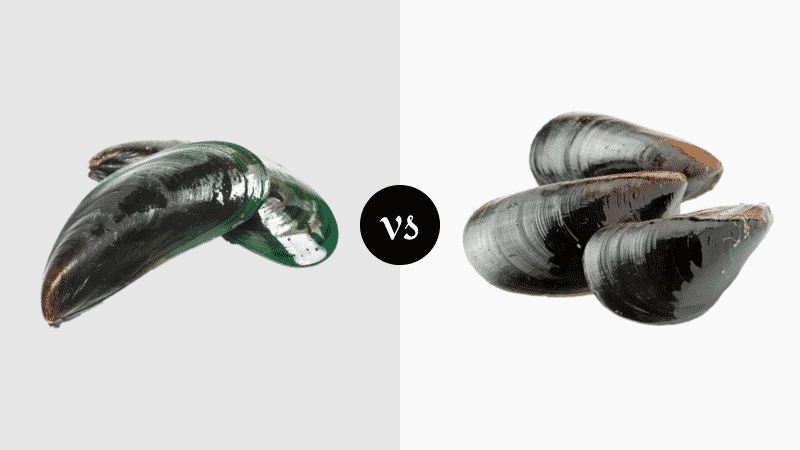