Due to their immaturity, green beans are less fibrous than fully ripe kidney beans. Similarly, unlike dry kidney beans with a longer shelf life, green beans stay fresh and edible for a concise period.

You must consume them quickly if you want to get the best nutritional benefits from your beans.

Green beans are a staple household food – sold fresh, frozen, and canned. They are commonly used as an ingredient in other dishes such as stews, soups, and casseroles.

But you can eat them raw or boiled, steamed, baked, or stir-fried.

There are literally thousands of recipes you can find online about using green beans in a range of different dishes.

However, if you leave them be in the bag for too long, you will realize that your green beans will become a bit slimy. But have you ever wondered why that happens in the first place?

Why Do Green Beans Go Slimy In Bag?

Green beans start to cover themselves with a layer of slime whenever the best-by-date is right around the corner. It’s a natural decomposition process that has developed over time in nature.

Green beans, like other perishable foods, are exposed to spoilage and pathogenic bacteria.

Spoilage bacteria work alongside the enzymes present within a green bean to facilitate its protein molecules’ natural decomposition.

The decomposition of a green bean can be observed visually as it turns from a healthy-green to sickly-brown and then finally a rotten-black color.

The green bean will also have a pungent, rotten odor and will form a slimy layer within the final stages of its decomposition.

If it is left in the bag for prolonged periods of time, this slimy texture will start to appear on its own as the beans begin to decompose.

Is it safe to eat slimy beans?

When kept inside a fridge with temperatures lower than 40 degrees Fahrenheit, green beans are only exposed to spoilage bacteria.

Because pathogenic bacteria such as E. Coli and Bacillus cereus are deactivated under such temperatures, you don’t really have to worry about the beans carrying harmful diseases due to bacteria’s growth.

Keep in mind that keeping the green beans in a fridge doesn’t eliminate their best-by date; it just extends it a little bit. The beans will still go bad, but they will take longer to do so.

If you store your green beans inside the fridge the whole time and the best-by-date is still a single day away, then there is still a possibility of eating them.

Look for and discard the slightly brown and black spots. Wash your green beans with soap until you’ve gotten rid of every bit of slime.

Cook your green beans in boiling water for 8 to 10 minutes before you decide to eat them.

Discard the beans if the brown and black spots are covering half of their surface.

Similarly, you should also discard your beans if they were placed outside the fridge for more than 4 hours.

It’s best to get rid of the beans if you can afford it because it’s better to avoid the risk of eating slimy green beans.

While they may not cause harmful diseases like E. Coli, they could still leave you with a serious tummy ache.

How to prevent your beans from getting slimy?

There are two easy ways that will help you keep your beans slime-free. These two methods will also extend the life span of your green beans and ensure they remain safe for consumption.

The two life-extending, slime preventing methods are freezing and canning.

Freezing your green beans inside an air-tight bag will stagnate the enzyme activity, and as a result, your beans will have a lifetime of 7 to 10 months if frozen properly.

Blanching is a common technique that is used by people all over the globe. Basically, all you have to do is put your green beans in boiling water to “scald” them.

After a brief time period, while it is submerged in the boiling water, you must take it out and put the beans in ice water.

Blanching is commonly used to preserve the quality of food over a prolonged period of time.

Follow the USDA procedure when freezing your green beans.

Canning your green beans is the less preferable way when compared with freezing. That’s because you must cook your beans thoroughly before you put them in the can.

Greens beans are low acid foods, so we advise you to follow the USDA pressure canning procedure.

It’s generally important that you freeze them instead of canning them because you will at least be able to cook a fresh meal on your own once you have taken the beans out of the freezer to use. 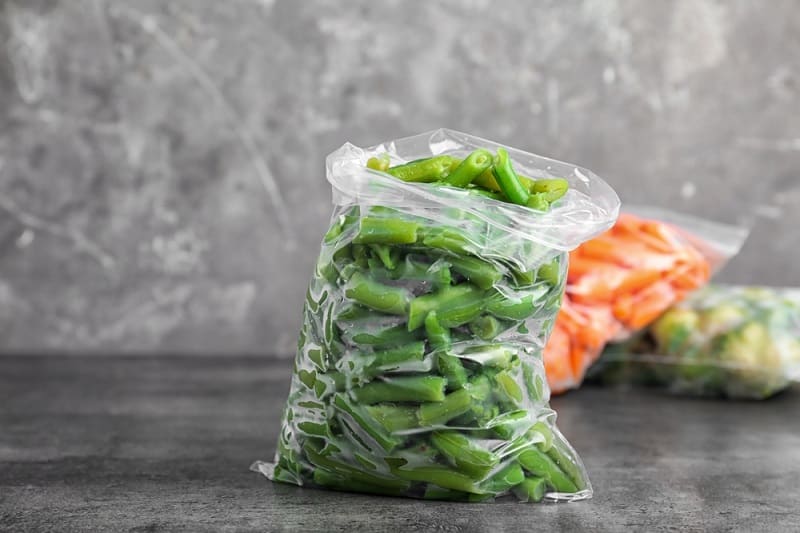