The use of flour has become quite common these days. Almost every other crunchy and nutty item calls for various types of flour. When it comes to Middle Eastern, Indian, Asian, or even French cuisine, gram flour is used substantially in an array of spicy dishes.

Gram flour is also known as Besan flour, or simply chickpea flour hinting towards its origin. Despite its versatility and unique flavor, gram flour can be tricky to find. Stocks often run out quickly.

Fortunately, you don’t need to worry. There are several other options readily available that can be easily used as gram flour substitutes. They may not give you the same nutty taste but the texture and will be the same. Read on to explore the best substitutes for gram flour available.

What Is Gram Flour And What Is It Used For?

Gram flour is a gluten-free flour obtained from milling dried gram chickpeas. Chickpea flour may be new to people from certain places in the world, but it’s a common ingredient. Gram chickpeas are among the most widely used food staples in India, Asia, and the Middle East. Even French cuisine realized the value of besan flour and featured many recipes calling for it.

Asian cuisine has “Pakoras” as a favorite flatbread made with gram flour. The earthy flavor and pale powdery texture are best suited to spicy and savory dishes. Furthermore, deep-fried jalapenos and other vegetables coated in gram flour come out decadently crispy. Finally, the rich, nutty coating makes snacks worth binging.

Once you’ve grown familiar with gram flour, you’ll soon realize why it’s such a valuable, versatile ingredient. Overall, it’s one of those must-haves that make having a list of alternatives lined up essential. We’ve got all the best gram flour substitutions coming up.

How Do I Substitute Gram Flour?

Running out of essential grocery items, especially in the eleventh hour, is one of the most frustrating experiences. Suppose you have guests coming over. Everything is set up. However, one major ingredient is missing – it can ruin your whole preparation, the timing, and the evening at large.

Versatile ingredients like gram flour can vanish faster than you think. It’s often hard to find at your local grocer due to demand. If this is the case and you can’t get your hands on any, you can use several gluten-free flours as alternatives.

Remember, not all dishes will be possible without gram flour. Meals like “Besan Ladoos” won’t work with another type. This being said, these gram flour substitutes will do a good job in most recipes. Use them either alone or mixed to reach the consistency you feel will work best. 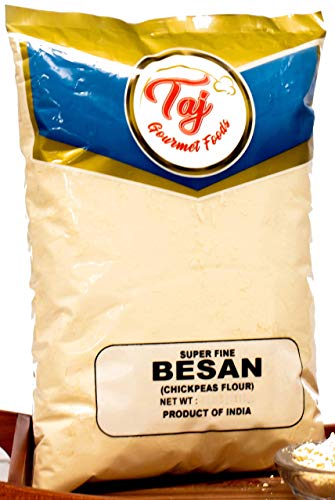 The gram flour alternatives listed here might not be able to give you the exact nutty and savory taste as gram flour. However, they will give you the same texture and a similar flavor to a good extent.

If you can’t find gram flour, look for the nutty staple by one of its other names. Gram flour is often sold as chickpea flour, garbanzo flour, or garbanzo bean flour. Chickpea flour and gram flour are the same things. Both are impressive thickeners and grant a great texture to fried foods.

Try coating your meat or vegetables in any flour made from chickpeas if your recipe asks for gram flour. You can’t go wrong.

Rice flour is gluten-free, making it a fantastic alternative to gram flour that’s just as healthy. It thickens just like gram flour and works equally well as a coating. You’ll find that rice flour absorbs less oil, resulting in lower calories and a better texture across the board. Your meat or vegetables also have less likelihood of coming out oily leaving the original flavors intact.

Cornflour binds two ingredients together perfectly in the same manner as gram flour. It’s also a great thickening agent. Use cornflour as a substitute for gram flour in almost any recipe. It is, however, a little too dense to make dishes like Pakoras or Cheela. Your meals will also have a richness to them, thanks to the subtle flavor of corn.

You’ll be surprised by just how similar quinoa’s texture and taste are to whole wheat flour. Quinoa flour is a reliable alternative to chickpea flour that’s packed with nutrients. It’s gluten-free with a rewardingly nutty, sweet flavor. If you can’t find any in your local health food store, try making your own at home.

Rinse 2 cups of quinoa seeds. Bake them until golden and allow them to cool. This usually takes under five minutes. Next, pulse the quinoa through a blender or food processor until fine, working through a quarter cup at a time. You’ll get around 1/3 of a cup of flour for every 1/4 cup quinoa, and it lasts for six months when refrigerated.

However, it does have a bitter aftertaste that’s a little too intense for some. Therefore, it’s best to blend millet with another flour like soybean or rice flour.

With nothing removed and the whole wheatberry processed, whole wheat flour has a wonderfully nutty taste. It’s a worthy alternative to gram flour that’s relatively coarse in comparison.

Cassava flour made from ground cassava root is a favorite for many gluten-free cooks. The first thing you’ll find is that cassava flour is much finer than other varieties. There’s also unmistakable neutrality to the taste.

As a result, it’s one of the most versatile gram flour substitutes and can be used for just about anything. From baking to thickening, coating, and all classic recipes, cassava will work. Consider it an all-purpose replacement to chickpea flour.

Powdered oatmeal forms a flour that is a compatible substitute to gram flour. It’s a great thickener. It binds well, and you get a similar nutty flavor. If you can’t find powdered oatmeal, make your own. Pulse your rolled oats in a blender or food processor until they reach the fine consistency of flour.

Before we recommend soybean flour as a gram flour alternative, keep in mind that it may affect thyroid function. If you have hyper- or hypothyroidism, avoid soybean flour.

This being said, it’s a great source of protein and works well as a substitute for gram flour. The taste is mild but similarly nutty, and soybean flour is almost as versatile.

Gluten-free buckwheat flour is a great alternative to try when you’re out of Besan. The flavor is rich and savory, perfect for coatings and thickening.

However, buckwheat doesn’t work for most dessert goods. Nevertheless, its low GI and high protein and calcium concentration make it a healthy option that anyone who loves baked goods must try.

Spelled flour is very similar to whole wheat flour but far finer. It performs similarly to whole grain flour and adds an immense amount of flavor to meals.

Try Spelt for baking bread, savory dishes, coatings, and thickening. In addition, you can use it in desserts and cookies, granting a light texture to cakes and other sweet baked goods.

Lentil flour is a tasty, healthy alternative to gram flour that everyone needs to try. Unfortunately, finding lentil flour can be troublesome. If your health store or grocer doesn’t have any available, make your own.

Rinse a cup or two of lentils (if not more.) Dry your lentils using paper towels. Scatter the dried lentils on a lined baking tray and toast them for around five minutes. Allow the lentils to cool. Transfer to a blender or food processor and then pulse until a fine, powdery consistency is reached. Sieve the mixture and discard anything too large to pass through.

Tapioca flour is made from starch extracted from cassava roots. It’s one of the chewier gram flour substitutes. This means it works well as a coating for fried food, and it’s a great thickening.

However, we wouldn’t advise baking with tapioca flour alone as it is pure starch. You’d have to use it in combination with another flour.

Coconut flour is a gram flour substitute that has considerably more binding power than other flour. Therefore, you’ll need to use a quarter of the quantity of coconut flour when substituting for gram or all-purpose flour.

Keep in mind that most recipes will need you to add an egg for each quarter cup of coconut flour to compensate for the moisture and structure. Alternatively, opt for adding chia seed or flaxseed and water instead if vegan.

There are many worthy gram flour substitutes available. Each one will do the job of besan flour but at the same time will also grant a unique flavor of its own.

Depending on the recipe, you may want something nutty like oatmeal powder or perhaps a more neutral alternative like rice flour. The crispiness is outstanding, and the plain-taste thickening is great. A large number of chefs find that combining flours grants the best results. Good luck discovering tasty combos of your own! 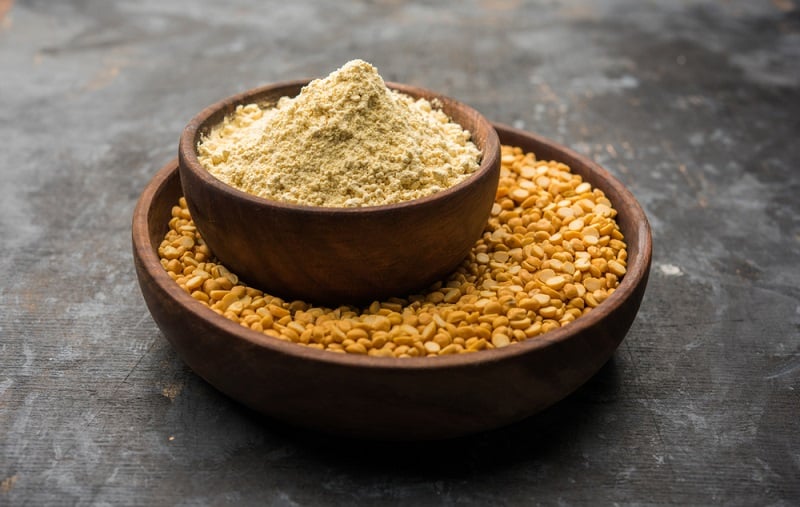