Getting a good grill and sandwich press opens up so many possibilities for a quick, tasty supper. Opt for a George Foreman, and you’re getting an electric grill that’s not only great at both toasting sandwiches and cooking meat and vegetables but also doing so in a healthy manner.

After all, simply using the famous grill for cooking certain meats knocks off up to just under half the fat. We’re taking you through a comprehensive comparison of the George Foreman Grill vs. Panini Press so that you know the distinct advantages that each of these fine appliances offers.

They’re both endlessly versatile and among the best electric flat-top grills available.

The George Foreman Lean Mean Fat-Reducing Grilling Machine has filled the home of approximately 100 million homes since launching. Today, the George Foreman Grill is still one of the best designed slanted electric grills out there that does exactly as it claims.

Here’s a breakdown of what makes this low-fat grilling machine such a fantastic choice.

What Is A George Foreman Grill? 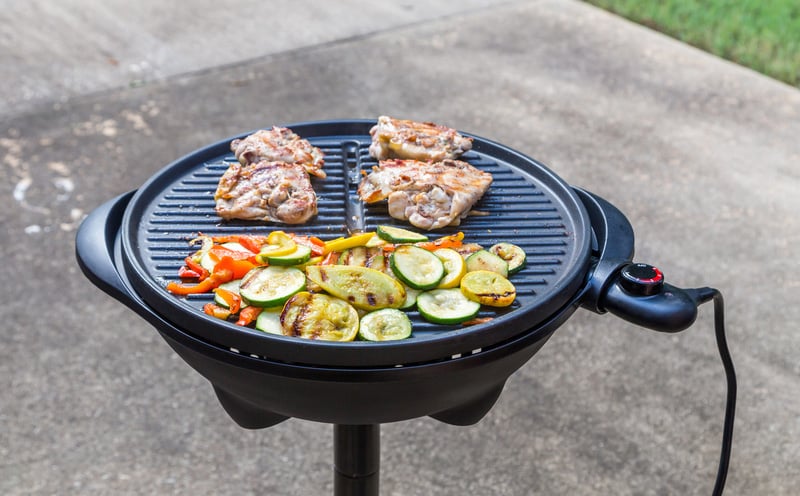 The George Foreman Grill started off as a cast-iron prototype and eventually evolved into the electric cooker we know today, which was patented in November of 1994.

Despite being promoted as George Foreman’s grill, the appliance was actually invented by a Chicago-born inventor named Michael W. Boehm. According to Reader’s Digest, the tinkerer who was born in 1944 spent most of his career as an industrial designer for various companies

After selling his grill idea to Salton Inc., George Foreman, the boxing great, was immediately hired as the pitchman for all infomercials. 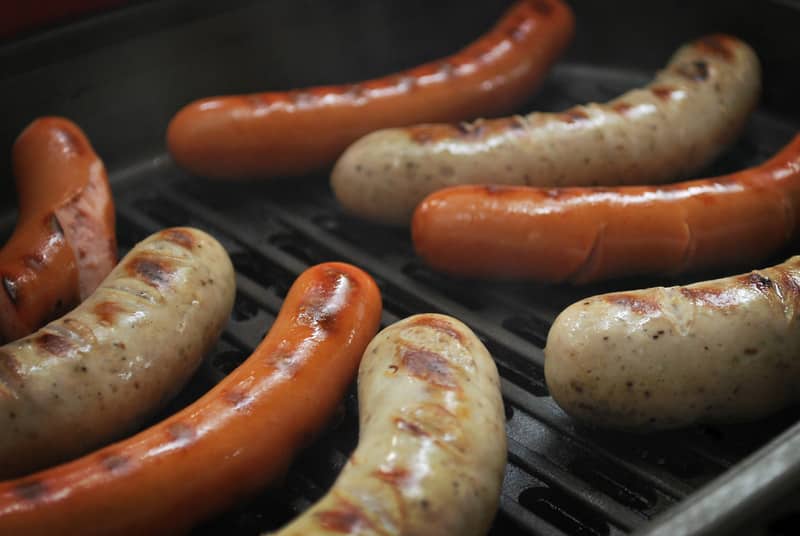 The George Foreman Electric Grill features a patented Slope design utilizing a fixed upper grill plate and a tilted grooved lower non-stick cooking surface that allows up to 42% of the fat to drip off into a collection compartment while cooking meat.

The standard model has fixed, non-removable grill plates, which have been criticized due to being difficult to clean and replace should wear and tear take its toll on the grill. All greater models have removable grill plates and are highly recommended over the entry-level model.

Each George Foreman Grill offers a maximum sustained cooking temperature of 400°F to 500°F, depending on the model. 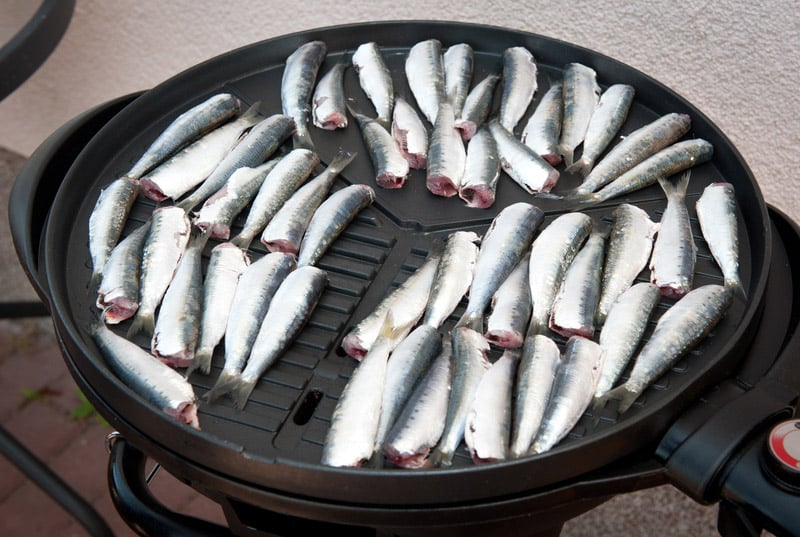 It takes the George Foreman Grill five minutes to preheat regardless of which temperature you’re using. The performance is equal to any indoor grill, but it does not get as hot as a searing pan or outdoor grill.

This makes it slightly faster than a stovetop and non-stick pan but not quite as fast as the direct heat of a barbecue or commercial gas grill. Medium steaks cook in around 4 to 7 minutes.

If you’re looking for a way to cook all your favorite food without all the extra, unnecessary fat, then the George Foreman grill is your best choice. Anyone on a diet will prefer the specialized low-fat cooking of the company’s grills.

Expect to pay marginally more for the George Foreman Grill across its various sizes as compared to the company’s Panini Press. The minimal difference isn’t enough to make price a factor in choosing which is best for your kitchen.

There’s no better choice for grilling meat indoors when one is considering an electric grill. If you grill meat and vegetables, you’ll be blown away by the performance. Fat is effectively reduced, just as the company claims.

Cleaning a George Foreman Grill is extremely easy and even easier if you buy a model that has removable grill plates. 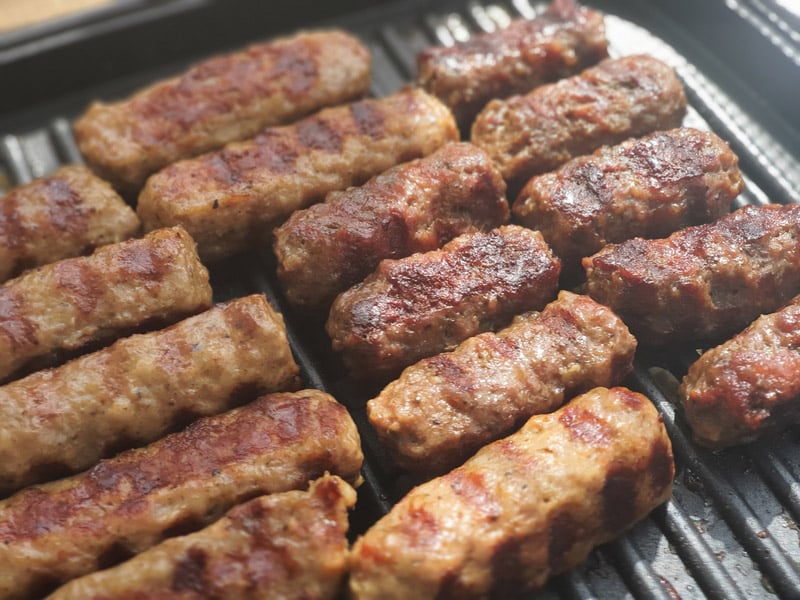 While ideally suited to meat, fish, and vegetables, the grilled cooking surface isn’t ideal for sandwiches like paninis and tramezzinis, nor subs and rolls.

Combining the power of the famous grill with a superior surface for toasting is the George Foreman Grill & Panini Press. It’s an excellent option for anyone who loves toasted sandwiches, paninis, and tramezzinis.

Let’s take a closer look at what makes this compact electric flat-topped grill such a popular choice.

What Is A George Foreman Panini Press? 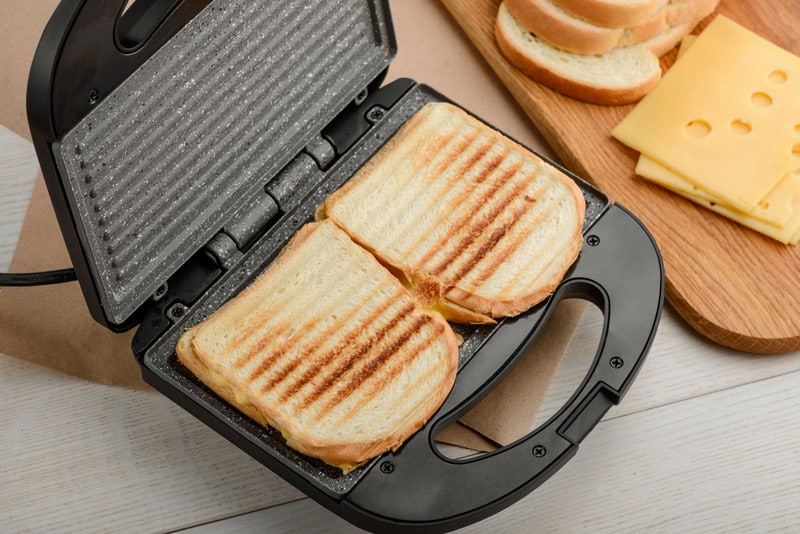 It offers the specialized toasting of sandwiches, panini, and other types of bread while at the same time cooking meat, fish, and vegetables almost as well as the standalone grill.

The specialized George Foreman Panini Press was added to the company’s product range in 2012, expanding upon an already-broad selection of popular grills of various sizes. 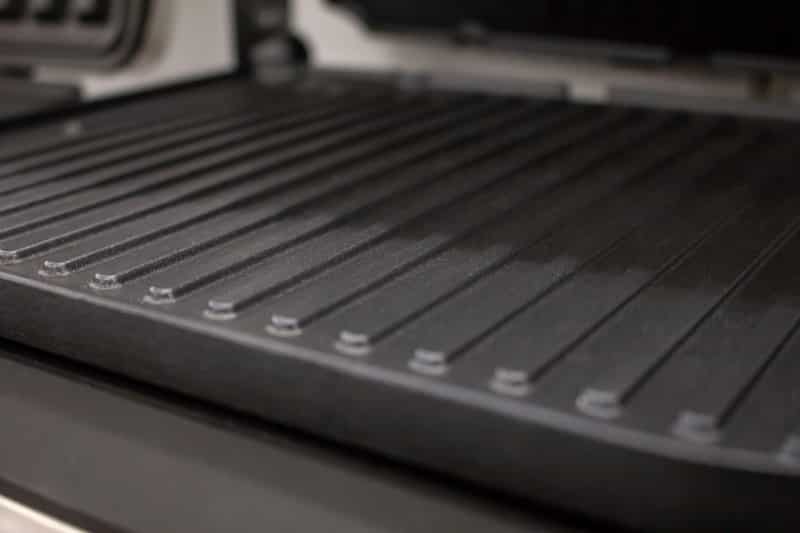 Each plate is coated in the patented Advanced George Tough Coating, which the company boasts to be three times stronger than conventional non-stick coatings.

The maximum temperature of a George Foreman Panini Press is 400°F.

You’ll be surprised by just how fast a George Foreman Panini Press heats up. It has a built-in quick heating feature that lets the unit reach maximum temperature in 2 to 3 minutes flat. 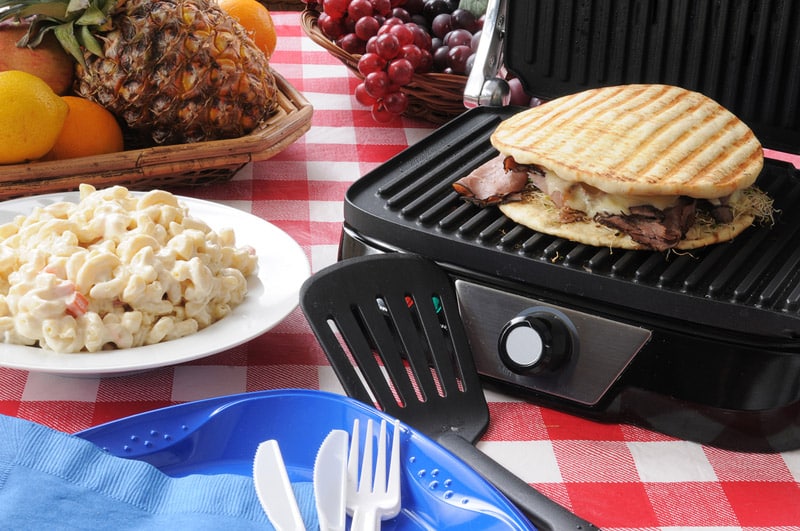 If you are a fan of cheese toasties, then your number one choice should undoubtedly be the George Foreman Panini press. The panini press makes the very best cheese toasted sandwiches, and there’s no comparison to an actual panini made on the press either.

Meat, fish, and vegetables can be cooked on the panini press, but they leave the unit quite dirty, covered in tricky to clean residue that’s, on average, harder to clean than the grill. Other than that minor caveat, all food cooks well on the press, but paninis and similar sandwiches that benefit from the flatter cooking surface come out unbeatable.

The George Foreman Panini Press is slightly cheaper than an equal-sized George Foreman Grill. While prices vary from supplier to supplier, the press is around 20% more affordable than the grill.

Just like the company’s grill, the George Foreman Panini Press features a drip tray that does a great job of collecting fat and crumbs as it accumulates during cooking. The dual surface flat-top grilling action offers even, steady heat distribution that cooks sandwiches to perfection.

While not as embossed as the griddle of the grill, the cooking surface still heats rapidly and to a high enough temperature to cook meat, poultry, and seafood just without pronounced grill marks. 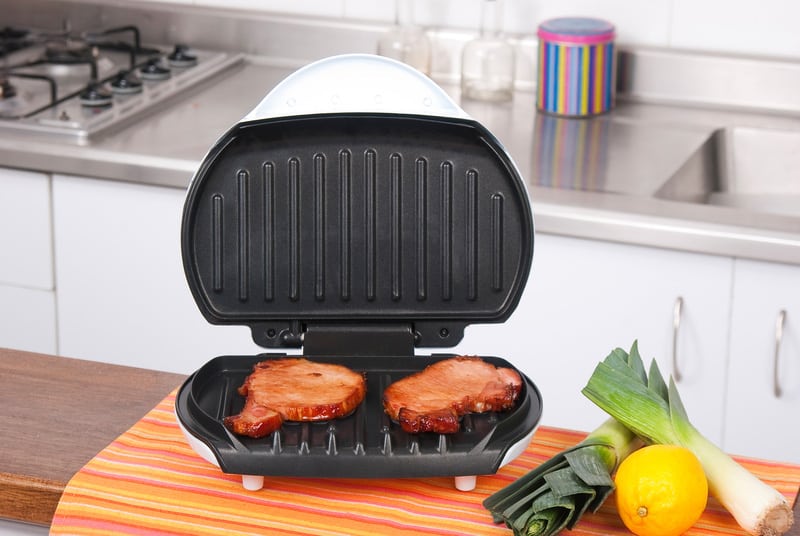 One of the only drawbacks to the George Foreman Panini Press is that ingredients like sauces and cheese are prone to get stuck.

Even though the unit is designed for fat to drip off, cleaning is more time-consuming than cleaning a George Foreman grill, with or without the removable grill plates.

What Is The Difference Between George Foreman Grill Vs. Panini Press? 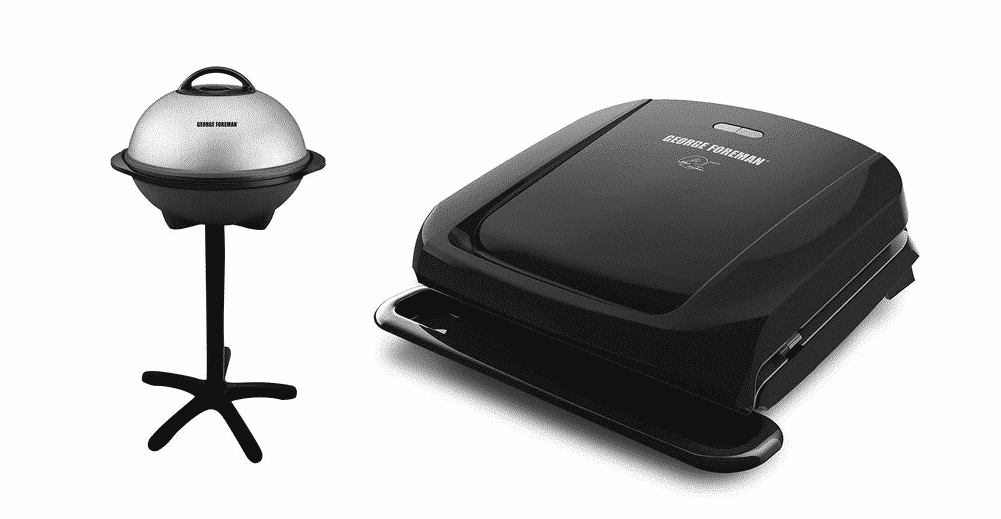 Which Is The Best Between The George Foreman Grill Vs. Panini Press?

Picking a winner between the George Foreman Grill vs. Panini Press largely depends on your cooking habits.

The versatility of the George Foreman Grill makes it the optimal choice for most, but if you find yourself making toasted sandwiches two to three times a week, then the company’s panini press should be a no-brainer.

The entire range is so successful that George Foreman has earned more in profits than he ever earned in boxing. You can’t really go wrong with either choice.