Chicken broth is an ingredient that is not new for our kitchen. The broth can be used in many dishes, stews, and soups. Be it vegetables or rice, chicken broth can play its role in bringing flavor to the ultimate dish. So, is condensed chicken broth different from a regular chicken broth?

Yes, it is. The condensed chicken broth is prepared by commercial means. It has a lot of strength and is salty. It is also used in stews and soups just like the chicken broth.

A can of condensed chicken broth will most probably be saltier than your need. So, you can always try a homemade broth. The ingredients you will need are chicken (of course), carrots, onions, celery, salt, and add spices only if you need them. The procedure involves roasting chicken to remove its fat. Then mix it with all other items and simmer. Here, you go. Freeze the mixture and enjoy condensed chicken broth.

If you bought a can of condensed chicken broth, then you can also try to turn it into gravy. Just add a couple of tablespoons in a 15 ounce can and let it boil.

Similar to the chicken broth in taste and consistency, beef broth makes a great alternative for chicken broth. The taste of the broth is very powerful and it is rich and deep.

Any recipe that calls for chicken broth can produce great results with water too. All you have to do is to sprinkle some spices and herbs to bring out the best flavor.

It is a 1:1 replacement of chicken broth. Add a cube in boiling water and substitute it for the chicken broth. This solution is saltier and stronger than the regular condensed and normal chicken broth. Hence, use it in reasonable quantities.

It can prove to be a good alternative, especially for vegans. However, chicken broth is richer in flavor than vegetable one. The idea of a vegetable broth is to give a background taste that enriches the dish and not overpowers it. Make sure you use strong vegetables like carrots and onions. Adding herbs will elevate the taste. In case you over boil the veggies, the result will be a disaster. Vegetable broth like chicken broth has great nutritional value.

Use the liquid from the drained out can of chicken peas or any other bean. Dilute the liquid with an equal part of water. The final solution can be used in a 1:1 ratio for chicken broth.

If you are looking for a can of condensed chicken broth and it is not available, you can go with the non-condensed one. It is easily available. You can condense it by boiling out the water and add salt according to your taste.

Thus, we can say that the main difference in condensed chicken broth vs chicken broth is the water quantity. The condensed form has less water content compared to the regular broth. There are several substitutes for these broths too.

If you are a vegan, the vegetable broth will suffice your culinary needs. However, if you are a meat lover, the beef broth will do the trick by giving off a savory flavor. Condensed chicken broth is often hard to find in the market. If you are looking for its substitute, try making one at home. Another option is removing excess water content in regular chicken broth. 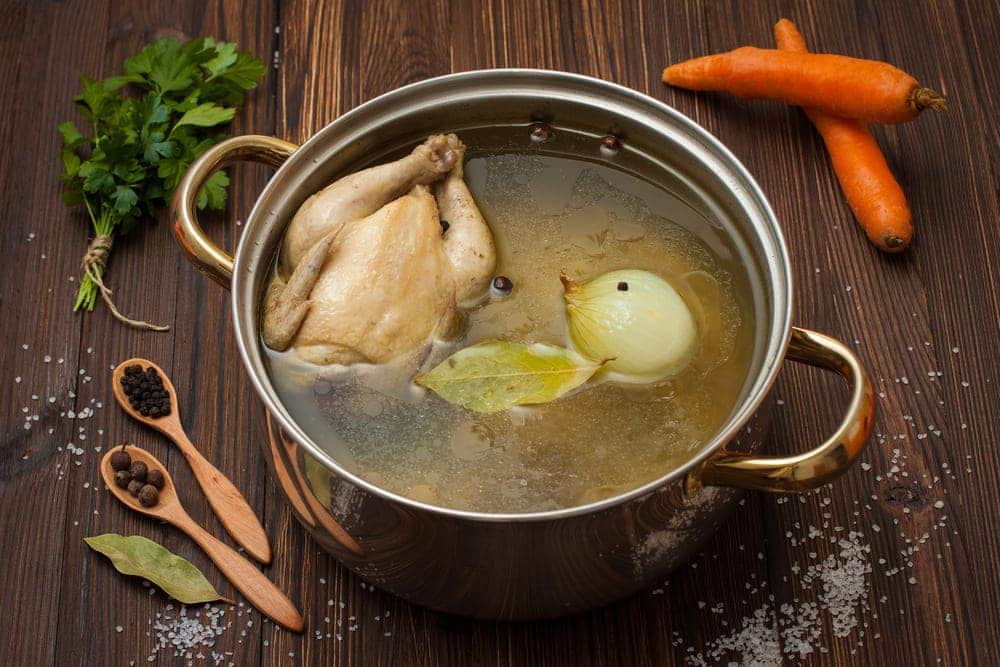