Don’t ever be left wondering which is the right choice between coconut powder vs. coconut flour. Our comparison has everything that you need to know about these two tasty kitchen staples coming up.

Both coconut powder and flour have definite uses and advantages and very different tastes and textures. Let’s take a closer look.

Both are used in baking, but only one can be mixed with water to make milk for drinking. Our comprehensive breakdown covers all the differences between these two commonly used ingredients.

Don’t mistake coconut powder for coconut flour, or you’ll end up with a complete flop. On the other hand, coconut powder used as-is or rehydrated into coconut milk tastes great and has its own range of delicious cooking applications.

Let’s take a closer look at what coconut powder is, its nutrition, and how it is best used.

What is Coconut Powder? Coconut powder is reconstituted with water to make coconut milk, a dairy milk replacement, or it can be used directly in powder form as a flavoring in various recipes. Essentially, coconut powder is a ground, dehydrated coconut cream.

Commercially available coconut powder has fewer calories than ordinary dried coconut because its fat is removed. Grinding down pure coconut will likely have greater calories but still less than consuming coconut fresh. 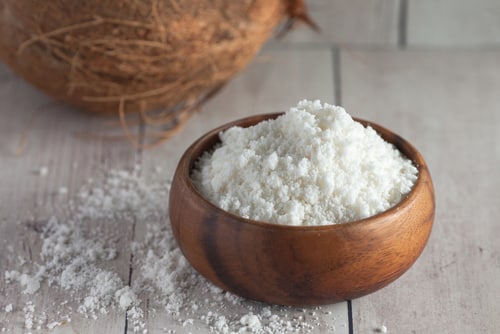 Coconut powder’s main use is as a tasty substitute for dairy milk. This gives it the same versatility. You can use coconut powder in all forms of desserts, baked goods, puddings, hot beverages, and both sweet and vegetable-based smoothies.

It’s just as useful in soups, stews, curries, sauces, and other savory cooking applications. The coconut powder is excellent in sweet dishes when added dry, thanks to the silky texture it grants to whatever you’re making. 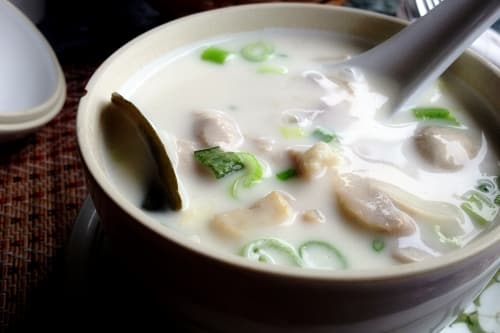 The texture of the dry coconut powder before being mixed with water is powdery, soft, and pourable. Expect a texture that’s comparable to milk powder.

It doesn’t have any of the extreme grittiness that’s present with coconut flour. Coconut milk made from coconut powder mixed with water is thick and creamy with a more viscous consistency than dairy milk. 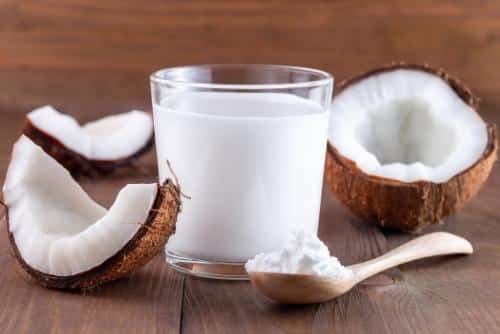 Certain varieties of coconut powder milk will need to be strained in order to remove all traces of grittiness, and only then will it reach a thick, silky smooth consistency.

When the meat of a coconut matures, it is dried up and ground to a fine consistency, and mixed with water. The mixture is then boiled to form cream, which is dried to make coconut powder.

Most coconut powder blends are typically made with water, coconut pulp, and coconut milk leftover after draining the milk away. The coconut is either dried in the sun or in an oven and then ground to powder.

Most commercial coconut milk powders are made by spray drying coconut cream, which basically involves the high-fat coconut pulp being atomized by means of forcing it through a sprayer at high temperature while at slurry consistency.

When used directly in baked goods, the best substitute for coconut powder is coconut cream powder. Coconut milk grants a similar flavor, but it’ll thin the consistency, which means you’ll need to compensate by adjusting the other ingredients – a task that’s not always practically possible.

Desiccated coconut is your next best alternative. 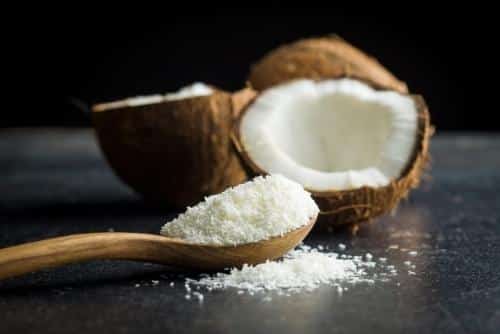 Coconut is loved by a wide variety of people around the globe, However, some people stay away from coconut products because of the high content of processed sugar and the other artificial ingredients sometimes added to them. 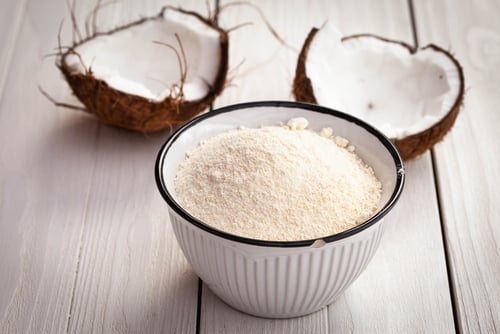 Unlike many other gluten-free flours, coconut flour is sweet and carries the faint taste of coconut. This makes it perfect for specific baked goods and culinary applications that call for a fresh sweet flavor.

Let’s take a closer look at coconut flour, its nutrition, and how it’s best used.

What is Coconut Flour?

Coconut flour is a flour just like wheat flour that can be used across all types of cooking applications, from baking to thickening sweet and savory dishes.

When the coconut meat is dried to powdered form, it produces gluten-free coconut flour. Coconut flour is specifically made from the solids of coconut that are grown on the Cocos nucifera palm tree for producing milk.

It is not a byproduct like coconut powder which is made from mature and leftover coconut flesh.

Coconut flour is very famous because of its gluten-free nature, along with its ultra-low-carb content. 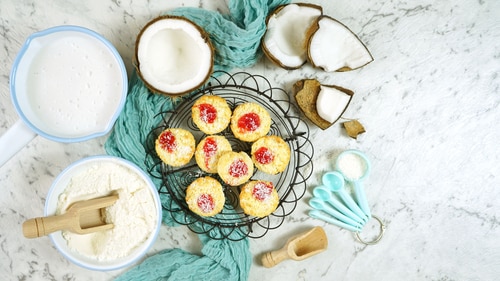 Although unsuitable as a direct substitute for flour across all recipes, coconut flour is a great flour replacement in certain types of baked goods and batters, particularly sweeter goods.

One of the best uses for coconut flour is in cookies, brownies, and cakes. Muffins typically come out perfect, too, but bread calls for a blend of coconut and another flour with a higher gluten content or better stretchability. The high fiber content in coconut flour gives it a rough texture. There’s a distinct grittiness even though the flour has been milled as finely as possible.

It never quite reaches the same degree of fineness as all-purpose or cake flour and is slighter coarser than bread flour. One must take care to sift coconut flour before baking or making the batter, or the final product will end up having a gritty consistency.

Coconut milk is squeezed from fresh coconut milk. The leftover coconut meat, absent of most of its milk but inclusive of coconut fat, is then dried at a low temperature before being ground down into a fine flour.

Coconut flour is highly sought after by those with celiac disease and individuals who are gluten intolerant. As a result, gluten-free flour is the best alternative to coconut flour.

Some people do not prefer having coconut flour because of its strong smell that can take over all the other scents of just about any baked product.

It is especially difficult to work with when baking goods using light-scented ingredients that don’t have bold flavors. The dominance of coconut flavor can sometimes ruin your bread or other baked product.

Coconut flour is not a good substitute for regular flour as gluten-free flour. This is due to how it absorbs a lot of liquid which makes the dough very stiff.

An optimal consistency from coconut flour is reached with a 1:1 ratio for adding liquid.

What’s The Difference Between Coconut Powder Vs. Coconut Flour

The main difference between coconut powder vs. coconut flour is that powdered coconut is a product that’s intended to be mixed with water to create coconut milk, whereas coconut flour is unsuitable for drinking and is rather a wheat-flour alternative.

You’ll notice that the only similarity is that both carry coconut flavor, but that’s as far as it goes. They’re not interchangeable. 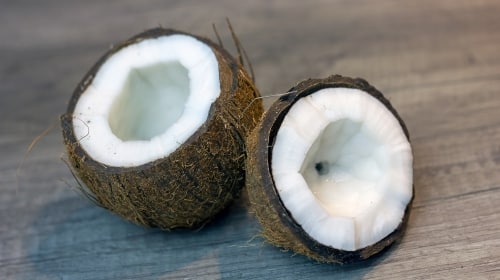 Which Is The Best Between Coconut Powder Vs. Coconut Flour

One cannot truly pick a winner between these two excellent coconut products because each fulfills a very different purpose.

What we can say, however, is that coconut powder has a far stronger coconut flavor, so keep this in mind if selecting an additive for desserts or baked goods.

This being said, the winner between coconut powder vs. coconut flour depends on what you’re using it for and, often, how intense you want the taste of coconut to be. 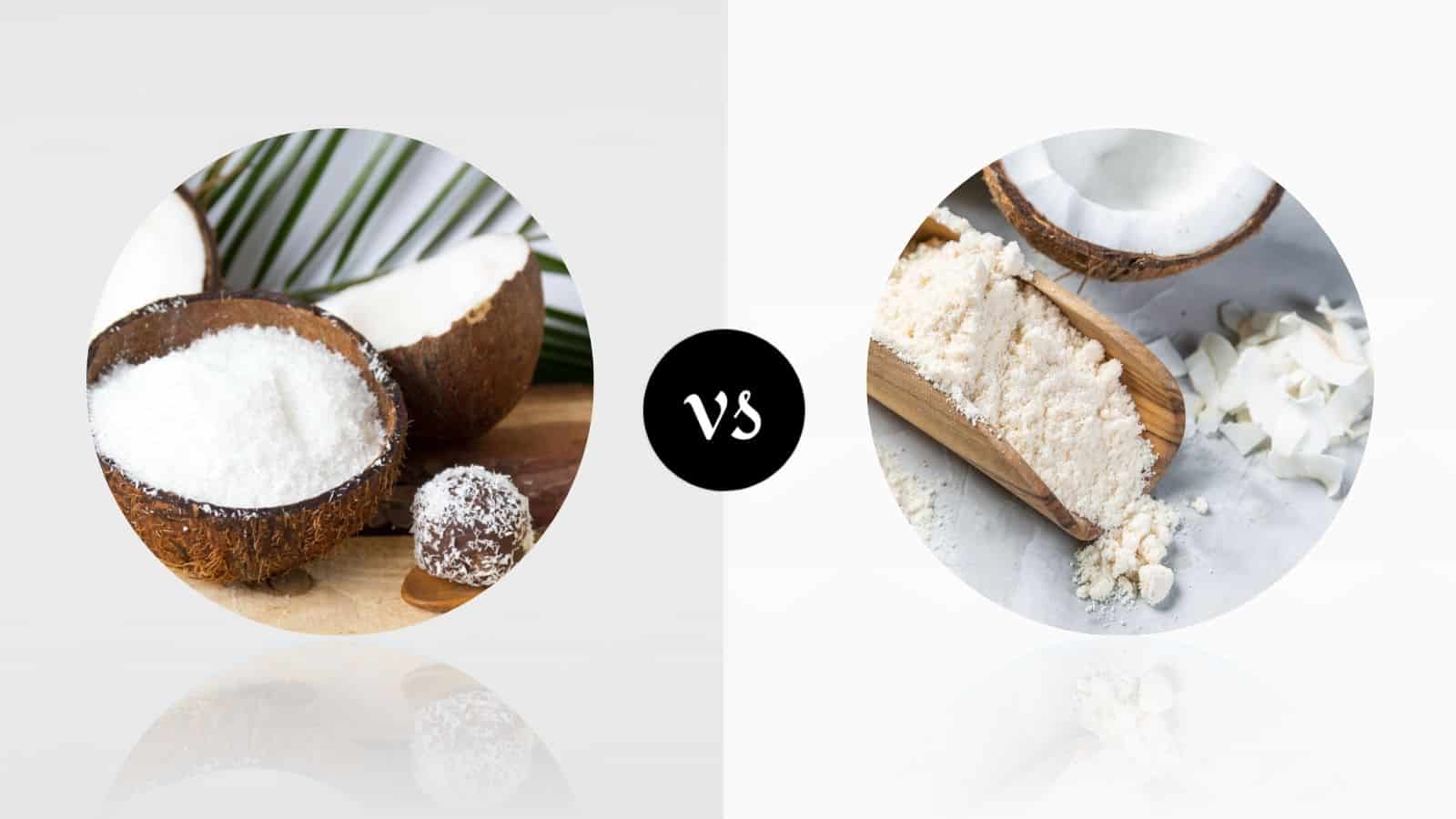