Whenever you hear the word ‘Tuna,’ what exactly comes to mind? Are you craving it already? We wouldn’t be surprised. After all, the global tuna market reached a whopping value of $40.12 billion in 2021, and the canned tuna market is set to be growing at a whopping 6% a year.

Out of the many varieties of tuna available, many end up confused between white tuna vs. red tuna, and we’ve got all the information that you need to know about each coming up in this in-depth comparison.

Tuna is one of the most popular forms of fish across the world that consists of eight species found in distinct colors and sizes. You can have it packed, canned, or fresh, and tinned tuna is almost always pre-cooked.

Out of the various types of tuna and their many differences and similarities, two base classifications arise, namely white tuna and red tuna.

All tuna turns white when it’s cooked, but certain types of tuna are redder than others. In fact, there is only one type of tuna that can be considered as ‘white,’ and we’ve got all the information and a complete comparison between white tuna and red tuna coming up. 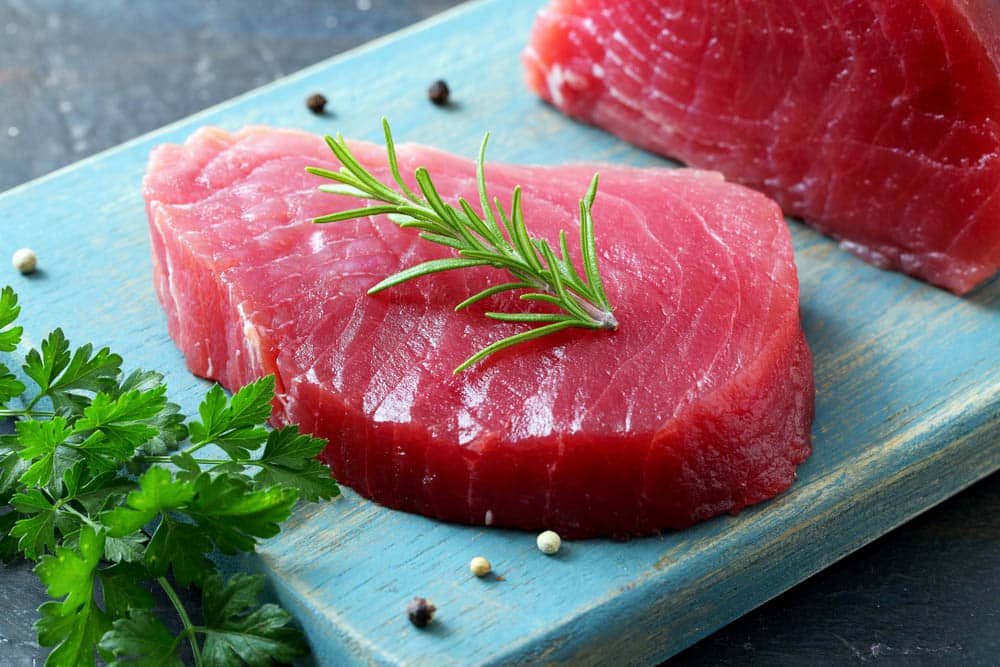 Just about all tuna can be called red tuna due to the color of its flesh immediately after being sliced.

There are, however, certain species that are better suited to the description and several facts concerning the taste and texture to keep in mind when differentiating between white and red tuna. Let’s take a closer look at what exactly red tuna defines.

Although all raw tuna meat is a shade of pink, red tuna is usually classified as Atlantic bluefin tuna.

However, it can also be referring to boldly fishy Skipjack, pale and mild Yellowfin (Ahi) tuna, the characteristic dark red flesh with high fat and flavor, or, of course, the Bluefin mentioned earlier.

Although light-tasting Albacore is most often canned and referred to as white tuna, fresh filets can be colloquially called red tuna as well due to the light red flesh, just like all other tuna species.

Tuna is fished around the world in over seventy different countries. The largest Atlantic bluefin tuna is caught in the Mediterranean Sea, with significant populations found in the North Atlantic pelagic ecosystem and nearby seas. 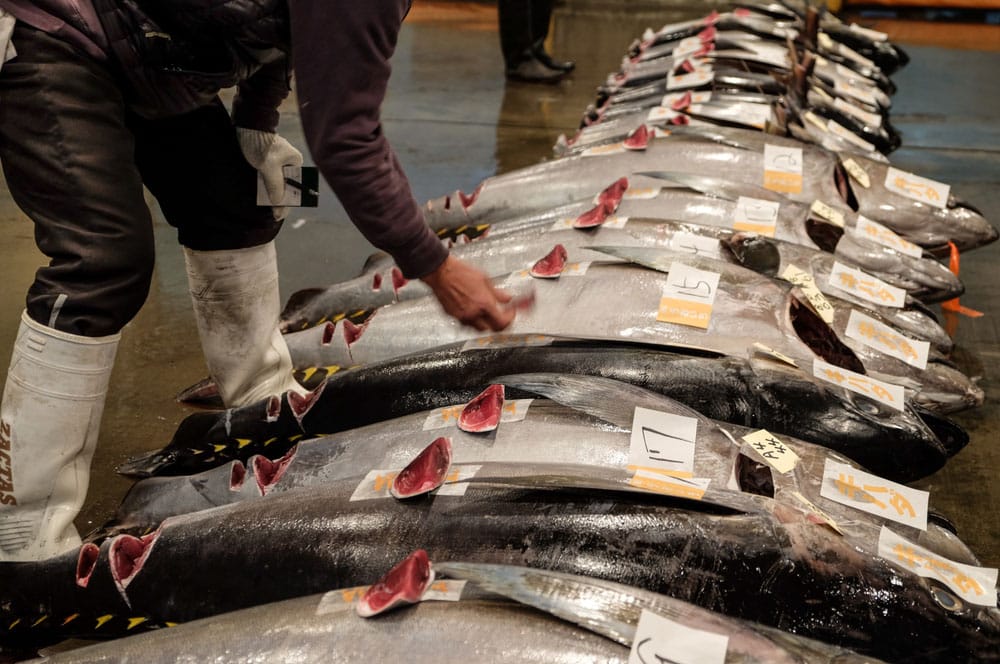 Skipjack tuna are harvested from the Western Pacific, Central Pacific, Indian Ocean, Western Atlantic, and Eastern Atlantic Oceans. Most of the world’s Ahi tuna (yellowfin) is caught by the South African industry using longline fishing in the Atlantic and Indian oceans.

Tuna has dark red flesh with pink to purple hues that obtain its bright coloring red oxymyoglobin, which is a protein that binds to oxygen similarly to hemoglobin that gives blood its coloring.

A fresh cut of tuna has the brightest red flesh, but the color degrades over time and forms brown metmyoglobin.

The color and flavor of each species of tuna are different. The four species considered red tuna, namely Atlantic bluefin, skipjack, and yellowfin tuna, are all bolder in fishy flavor than Albacore, “white” tuna.

Bluefin tuna, which is most often referred to as red tuna, is considered to be the tastiest variety of tuna with a medium to the full intensity of flavor and just the right degree of fat. 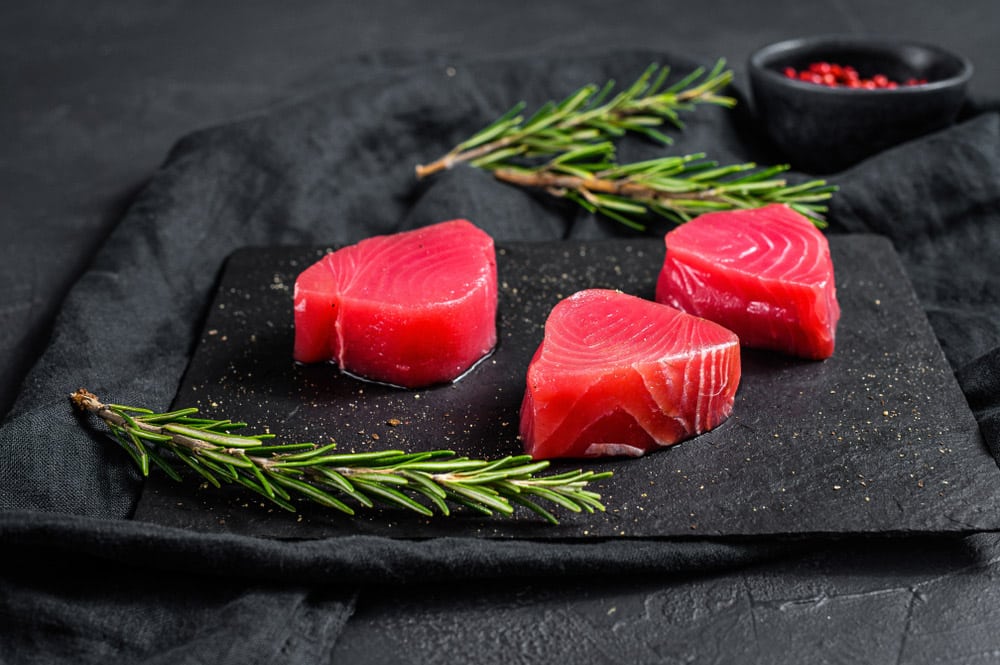 All types of tuna are firmer than super-soft Albacore tuna. Atlantic bluefin tuna, in particular, has large, firm flakes that retain their shape well thanks to the noticeable fattiness without falling apart.

The firmness, perfect texture, and flavor make bluefin tuna the most popular variety for sushi.

The redder the tuna, the better suited it is to being served raw. Therefore, freshly cut Atlantic bluefin tuna makes the best sushi. However, Bluefin is also a variety that’s endlessly versatile. Feel free to cook it in any manner preferred while expecting exemplary results.

Freshly caught bluefin tuna retails for between $20 to $40 per pound in the US, and the average filet weighs 6.5 ounces. 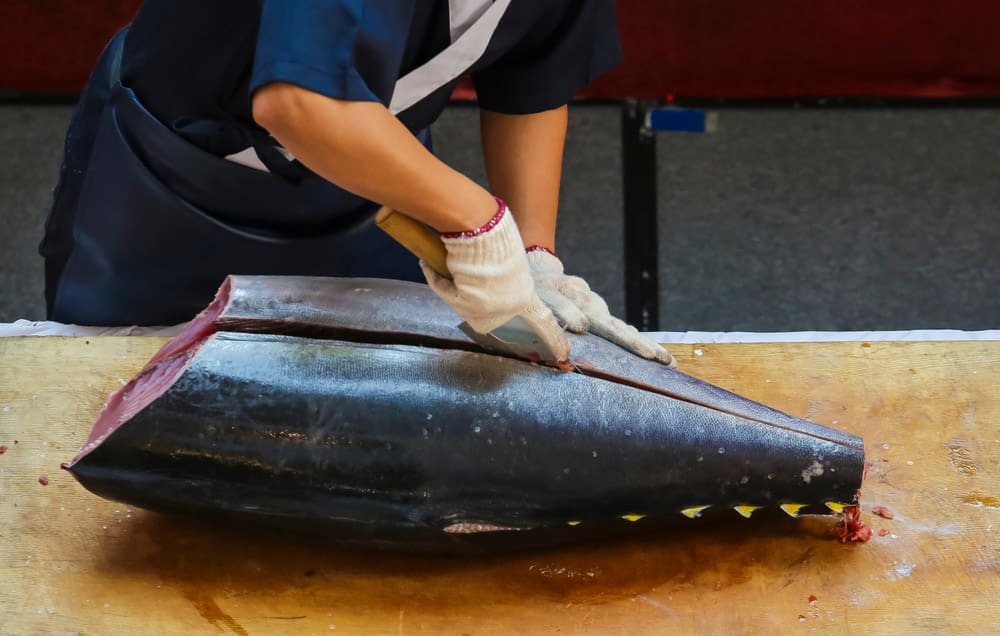 Bluefin tuna are available around the world and are widely overfished due to demand. There is no closed season for bluefin tuna.

If you want to try white tuna, order albacore specifically. There are several species of fish that aren’t actually tuna at all that certain sellers try to pass off as white tuna, so we’d say either avoid ordering an unknown variety or order by name as advised. 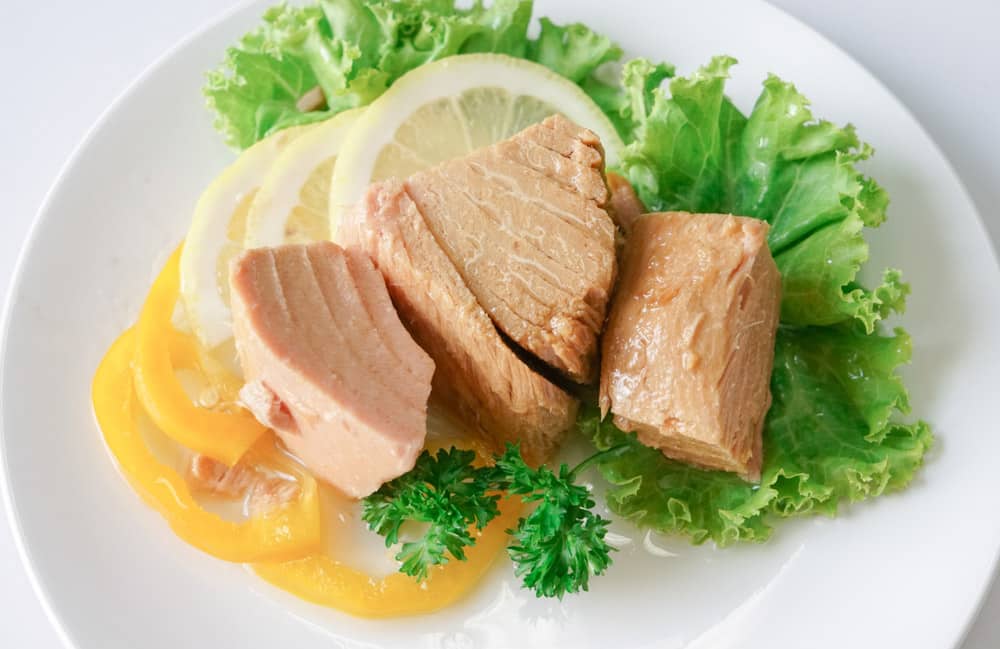 Here is a breakdown of what you can expect from the actual species of tuna, Albacore, colloquially known as white tuna.

While in actuality, there is no type of fish or tuna that’s a true white tuna, Albacore is often referred to as white tuna due to its light coloring and extremely mild flavor.

Albacore, scientifically termed Thunnus alalunga, is also known as longfin tuna, and you’ll most often find it referred to as white tuna when Albacore is canned. There is also a fish called an Escolar that is nicknamed white tuna.

However, Escolar, or Lepidocybium flavobrunneum, is actually a deepwater snake mackerel and not tuna at all.

Albacore tuna are found in the warm waters of the Atlantic, Pacific, and Indian Oceans, as well as the Mediterranean Sea. There are six specific fishing locations scattered across these regions.

The first thing you’ll notice about albacore tuna is that fresh filets have far lighter colored meat than all the other varieties. Most other types of tuna lose their red coloring after being cooked, but Albacore starts out a pale shade of pink that cooks white.

One of the top-selling points of albacore tuna is just how mild its flavor is. White tuna is light and has a low degree of fattiness which translates to a type of fish that doesn’t have the distinctive fishy taste that’s off-putting to some people who aren’t overly fond of seafood.

Expect meaty, firm flakes that aren’t as solid as other varieties of tuna-like yellowfin. The flesh flakes easier while melting in your mouth instead of offering a considerable amount of chewiness like other fattier fish.

The best use for Albacore depends on whether you’re working with a fresh filet or canned fish. Canned tuna is great on sandwiches and in salads and pasta. It is also extremely useful for making casseroles and baked savory pies. 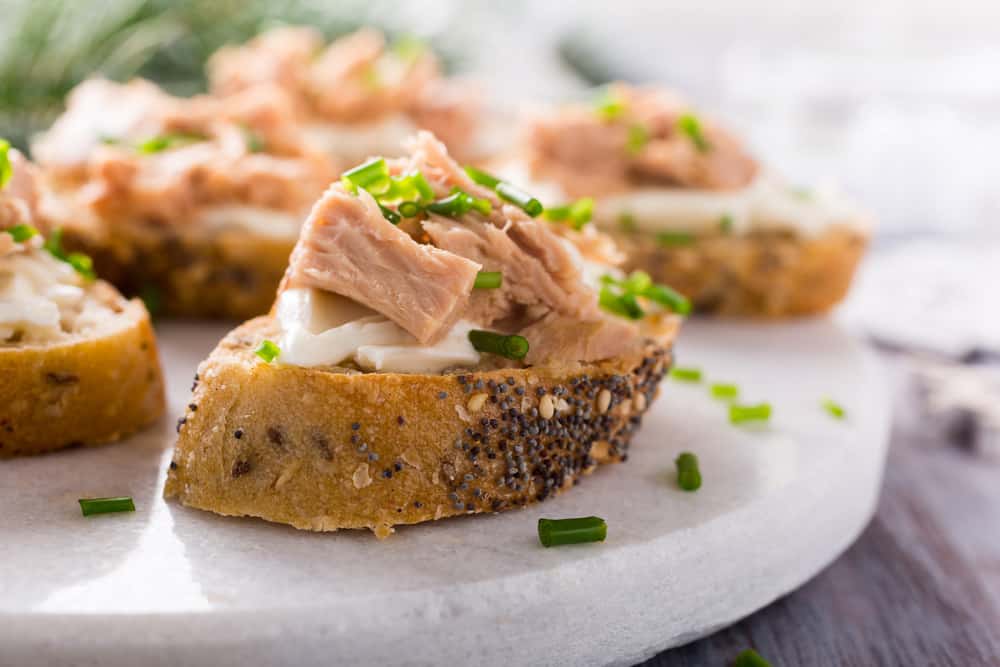 Fresh Albacore can be prepared in any manner preferred, including but not limited to grilling, frying, baking, and roasting.

Fresh Albacore retails for anything between $15 and $25 per pound. Canned Albacore sells for an average of $3 to $4 per 12-ounce can.

Albacore is available all around the world without any seasonal restrictions. Furthermore, most tinned tuna is also Albacore regardless of where you’re buying it.

Why Does Red Tuna Turn White When Cooked?

From the moment that a filet of tuna is sliced, the flesh begins to degrade, which causes it to lose red oxymyoglobin and form metmyoglobin instead. Cooking effectively denatures the tuna, which speeds up this process and causes the tuna to change color closer to white. 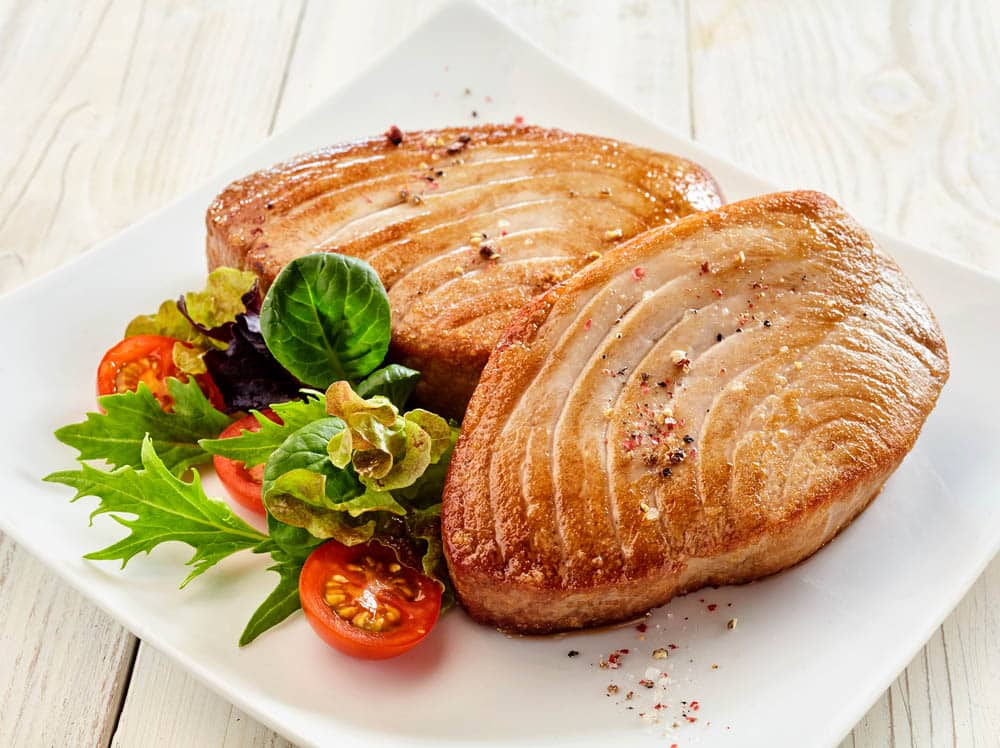 Albacore tuna, which has the lightest flesh to start with, ends up a marred white when canned because of being cooked.

Is White Tuna Known As ‘Escolar’ In Certain Regions?

Escolar is not tuna at all. Scientifically termed Lepidocybium flavobrunneum, escolar is actually a snake mackerel that comes with consumption dangers.

The oils inherent to this fish, also known as a butterfish, can upset your stomach and almost always cause diarrhea which is why escolar is banned in Japan. If a restaurant is trying to serve you white tuna and confirm that it’s escolar, not Albacore, avoid it at all costs.

What Is The Difference Between White Tuna And Red Tuna?

The main difference between white tuna and red tuna is that white tuna is an ambiguous term of reference that often erroneously identifies fish such as escolar that isn’t tuna at all but instead gets passed off as tuna, whereas red tuna refers to all tuna due to the red coloring of their flesh, and more specifically Atlantic bluefin tuna due to its vivid coloring.

Which Is Best Between White Tuna Vs. Red Tuna?

Unless you specifically want Albacore to try or for its mild flavor, ordering red tuna will almost always be better than white tuna. This is especially true when eating out. As we mentioned before, don’t order white tuna if the waitress/waitron can’t confirm that it is Albacore.

You could end up with a meal that’s not tuna at all but rather an undesirable fish like escolar, which is banned in Japan due to being considered toxic.

The oily flesh of an escolar is due to containing high levels of gempylotoxin, which has a laxative effect and causes gastrointestinal distress. 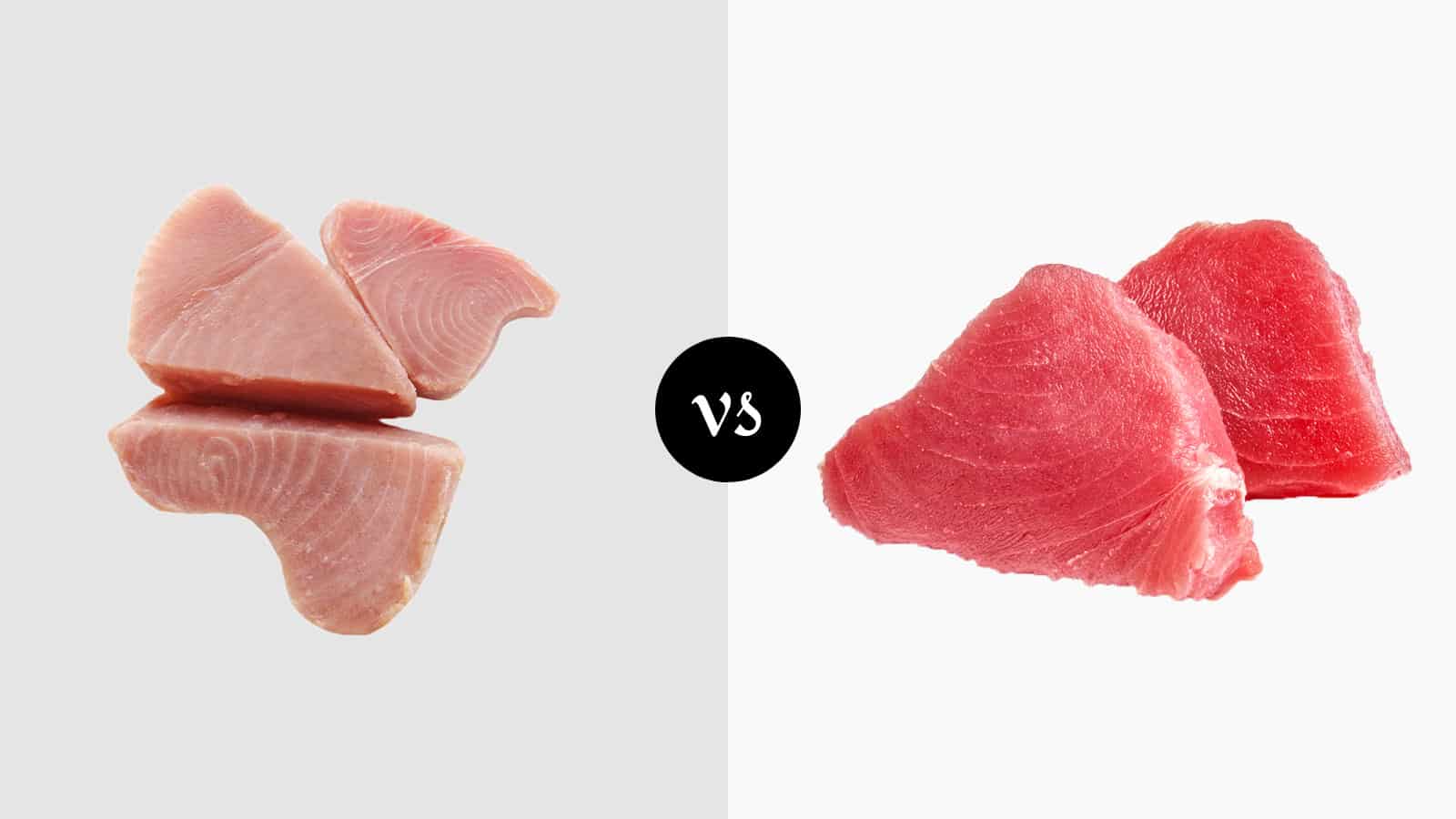