Beans are one of those food items that are intricately woven into the fabric of human society. When the first hunter-gatherers began tilling the earth and developing agricultural systems, beans were among the very first crops to be cultivated. Since then, beans of all types have continued to play a vital role in our food supply, making them one of the most common staple items in the human diet.

Today, beans are included as an essential part of a balanced diet in many parts of the world because they are available in different shapes, varieties, and sizes. Beans are also extremely versatile and convenient as they can be dried and stored for years without turning or going bad.

The nutritional value of dried beans

Beans belong to a class of vegetables known as legumes and they happen to be among the most versatile and nutritious food types available. Not only are beans generally low in fat, but they also contain high amounts of minerals such as potassium, iron, magnesium, and folate that are required for proper nutrition, all while containing zero cholesterol.

Beans can be consumed cooked or boiled but they can also be ground into flour, curdled into tofu and even fermented into different sauces. They also make great additions for salads, soups, and chilis.

Also a great source of protein, beans are usually excellent substitutes for meat, which generally contains more cholesterol as well as fat. Dry beans are also a great source of the water-soluble vitamins folate and thiamine so they should be included as part of a balanced diet. Furthermore, beans are an inexpensive option but before you add dried beans to your diet, there are some things that should be taken into consideration for purposes of safety.

The toxicity in dried beans

The nutritional value of dried beans cannot be denied. But what you may or may not know is that eating raw can be dangerous and can even cause death due to harmful toxins that may be contained naturally in the dried beans.

Toxins in different plant-based foods occur for a number of reasons. In some plants, toxins may serve as a naturally occurring pesticide that helps to ward off insect attacks while in some, they may protect the plant from damage resulting from harsh weather, UV light, microbes or poor handling. While it is easy enough for human beings to protect themselves against harmful toxins that are found in food, it is not always so straightforward when it comes to dried beans.

Someone might think that raw beans are an excellent source of nutrition. This is not so because beans actually have an improved nutritional profile when they are cooked thoroughly. As a matter of fact, it is estimated that up to 20% of poisoning cases that occur are attributed to the consumption of raw or undercooked beans.

Lectins exist in plants because they are thought to discourage animals and other pets from eating raw beans. Typically, animals can smell lectin levels from afar but human beings cannot. That is why it is so important to ensure that dried beans have been cooked thoroughly before consumption.

While red kidney beans are completely safe to consume when cooked thoroughly and properly, they should not be eaten partially cooked or raw because of the toxin Phytohaemagglutinin. When consumed by animals or humans, Phytohaemagglutinin can have adverse effects and can pose a serious threat to both livestock and humans.

Eating as little as 4 raw kidney beans can cause human beings to develop severe symptoms such as vomiting and abdominal pain so raw kidney beans should be avoided at all costs. For kidney beans to be consumed safely, they must be boiled for at least 10 minutes to make sure that the Phytohaemagglutinin levels have been completely destroyed.

Toxins that are found in other types of dried beans

Aside from red kidney beans, other types of toxins that are found in different varieties of beans include:

Tyramine is found most commonly in broad or fava beans. Raw fava beans also contain toxins such as vicine, convicine, as well as isouramil which are known to induce conditions such as hemolytic anemia in patients. The toxins in fava beans can also potentially cause a condition that is referred to as favism.

Purines are naturally occurring compounds that are found in animals, plants, and humans. In dried beans, purines are found in their highest levels in lima beans. Purines are known to cause illnesses such as gout and kidney stones.

Uncooked lima beans also contain compounds that can cause red blood cells to clump together. However, when lima beans are soaked, it can render these toxic compounds useless. As a rule of thumb, it is always a good idea to soak dried beans before cooking them so as to ensure that they are completely safe for consumption. 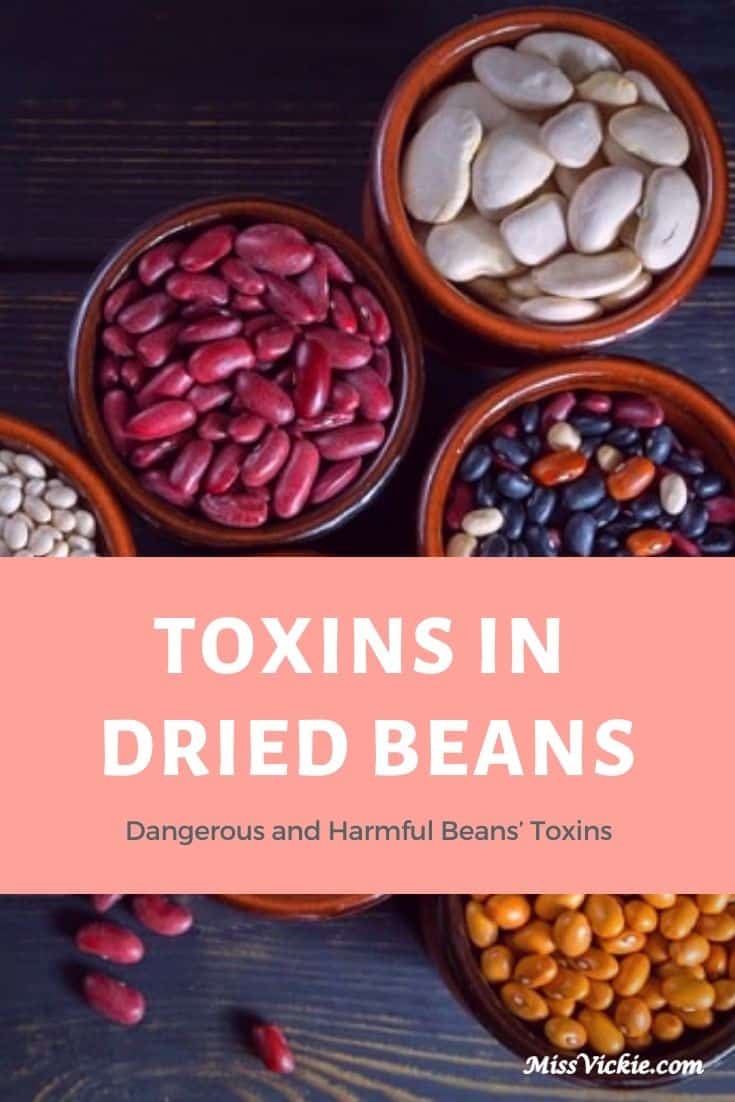