Skim milk – the low-calorie milk that contains around 0.1 percent fat. Skim milk is the residue that is left behind after a pot of whole milk has all of its milk-fat removed. Due to being a low calorie, low-fat milk, skim milk is mostly used by people who are on a strict healthy diet. Quite surprisingly, it’s also an ingredient used by farmers to fatten their pigs.

Sometimes you might not find a bottle of skim milk inside the general store. Similarly, you might not find it anywhere else or you’re just starved for time and cannot visit another store. But it’s nothing to sweat about because skim milk can be substituted with a lot of things.

We will discuss some of these skim milk substitutions to give you a more versatile cooking approach.

For replacement, a cup of skim milk is equal to a cup of low-fat sour cream or yogurt. But skim milk is not acidic whereas the other two replacements are acidic and possess a tangy flavor. So we advise you to use them as a replacement when baking, especially if you’re using baking soda as the leavening agent.

Low-fat half and half is a good skim milk substitute if you’re cooking something saucy, for example, a pot of delicious creamy gravy.

Almond milk has a similar consistency that works well with various desserts. Its nutty flavor is a great addition to your smoothies, but unfortunately, this substitute is not that great when used in making savory dishes.

Soy milk – the most versatile milk substitute – is made from soybeans and water. Popular throughout the world, soy milk is a popular alternative used by vegetarians, vegans, people on diet, and normal people.

Due to added thickeners, soy milk has a similar milk-like consistency. It’s used as a substitute when baking, cooking savory dishes, and desserts. 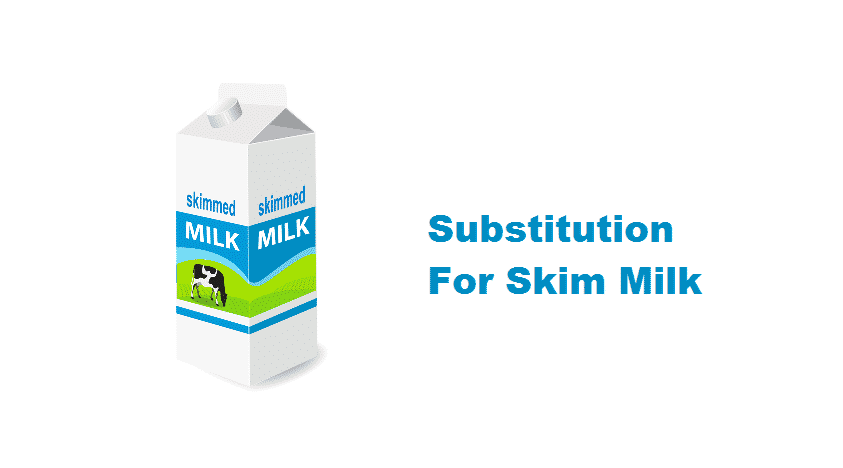