Pasta is a heavenly creation. Making pasta is both art and science at the same time. Home chefs and cooking experts alike usually consider the flour types that they use for pasta carefully.

Well, this is understandable. After all, the flour used determines the taste and texture.

Semolina flour and whole wheat flour are the two most commonly used flours for making pasta. Both give a satisfying texture and shape to your pasta while offering distinct benefits.

If you are wondering which one of them is a better choice, you are in the right place.

We’ll be taking you through a comprehensive comparison of semolina pasta vs. flour pasta so that you understand exactly how these two core ingredients affect the final product.

Regardless of all the differences, both semolina and regular flour are essential to well-rounded pasta. Let’s take a closer look.

The best chefs will have their own favorite ratio of semolina flour to regular flour. Some even prefer 100% semolina pasta over a blend.

Our comparison will help you come to grips with everything that you need to know to make an informed decision over which is best for your next delicious pasta-based meal.

Whether made out of semolina alone or used in combination with wheat flour, semolina pasta is amazing.

Once you’ve tried freshly made semolina pasta, you may never want to eat any other type ever again. Here is a breakdown of all its defining characteristics and how they compare to flour pasta.

What Is Semolina Flour Pasta?

Semolina flour is a coarsely grounded flour made from durum wheat, and semolina flour pasta is pasta made from semolina in order to benefit from the high gluten content and its many effects.

Pasta made from semolina flour is slightly sweeter than regular pasta with a nuttier, more wholesome overall taste.

Semolina flour pasta is firmer than regular pasta, with a more wholesome bite and general coarseness to its feel. Each noodle or sheet of semolina pasta is denser and generally more filling than its regular flour counterpart.

Semolina flour is a widely used flour all over the world, especially in the manufacturing of couscous, pasta, porridge, and bread. The most praised and widely used use is for making a variety of different kinds of pasta.

Due to the higher plasticity of semolina pasta, the batter has sufficient consistency to ensure that the pasta doesn’t lose its extruded shape when it is cooked.

This makes the semolina pasta a great choice for extruded pasta such as penne pasta. The shape of your pasta won’t change or mold as soon as it hits water after getting extruded.

If you are a fan of homemade pasta and have left buying pasta packets from the market, then replacing your all-flour pasta with semolina flour pasta would be a really healthy choice due to the high protein and fiber content in the semolina pasta.

There’s also far more flavor present in semolina flour pasta which is why most cooks combine semolina with other flour types when not deciding to go with semolina alone.

Semolina is far coarser than almost all competing varieties of flour. The coarseness grants a definite grain to each pasta noodle regardless of the shape.

If you don’t like textured pasta and prefer something that is totally smooth throughout each bit of every bite, stick to flour pasta instead.

Any regular premade pasta is going to be regular flour pasta. All the inexpensive varieties of spaghetti, macaroni, and screws that so many households rely on are nothing more than noodles made from wheat flour.

What is Flour Pasta?

Fresh Italian pasta is usually made with a combination of regular flour and eggs. The vast majority of flour types used for pasta are gluten-based.

Pasta made from regular flour has a break-like flavor, just far more neutral and subdued, with flat sweetness blanketing the wheaty taste instead of a roasted, baked flavor.

Flour pasta has more elasticity due to its high gluten content, thus granting pasta made with regular flour a good degree of chewiness. Gluten tends to grant the overall texture and shapes of pasta a definite and evenly smooth quality.

Unless you’ve tasted authentic homemade Italian pasta put together using a chef’s blend of semolina and flour, you’re probably used to using flour pasta for just about everything.

Pasta made with regular flour is the most versatile choice and can be served in any manner preferred.

This being said, the smooth consistency of flour pasta suits heartier meals better as opposed to rich, silky sauces that call for a textured pasta surface.

Despite semolina pasta having more inherent flavor, the neutrality of wheat flour pasta makes it the more versatile choice.

If you’re not sure of which consistency is preferred for any given pasta dish, rather go for regular pasta made from flour. If you’re making your own, however, a blend is far better.

The better the brand, the better the blend, in most cases. Deciding between semolina and regular flour should only be a consideration if you’re making your own pasta at home.

Otherwise, pick a brand that you know and trust in the highest price bracket you’re comfortable with.

What Is The Difference Between Semolina Pasta And Flour Pasta?

Which Is Best, Semolina Pasta Vs. Flour Pasta?

Those with gluten intolerance or celiac disease should opt for semolina pasta as the gluten content is almost negligible in semolina flour.

Yet, the hard durum wheat gives a tough yet definite texture to the pasta that can take some getting used to.

Semolina pasta is also largely considered the healthier choice due to its high fiber and protein content as compared to flour pasta, but if your diners are fussy eaters and not familiar with high-end cuisine, refrain from semolina-only pasta and go for its regular counterpart instead.

As aforementioned, between semolina pasta vs. flour pasta, a blend of flour and semolina is best, but this, of course, only applies to those making their own pasta fresh. 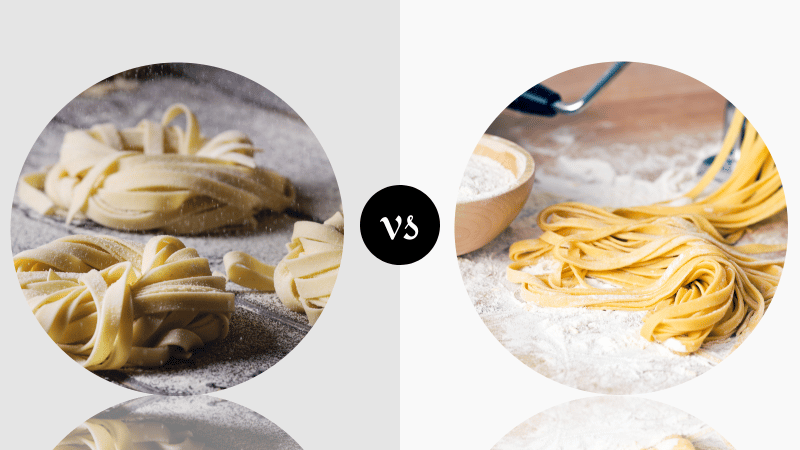